TripReporter’s regular testing family, Carole and Jason and their young boys Evan and Andy went on an exciting road trip with their VW campervan through ten countries, 2,920 miles and nine campsites.

We started our adventure armed with button boxes full of snacks, a TV for DVDs and electronics to keep the kids entertained.  But we spent our first night at a lovely campsite in Dover called The Chequers, a beautifully clean but basic campsite, allowing an early start to catch the DFDS Ferry to Calais. 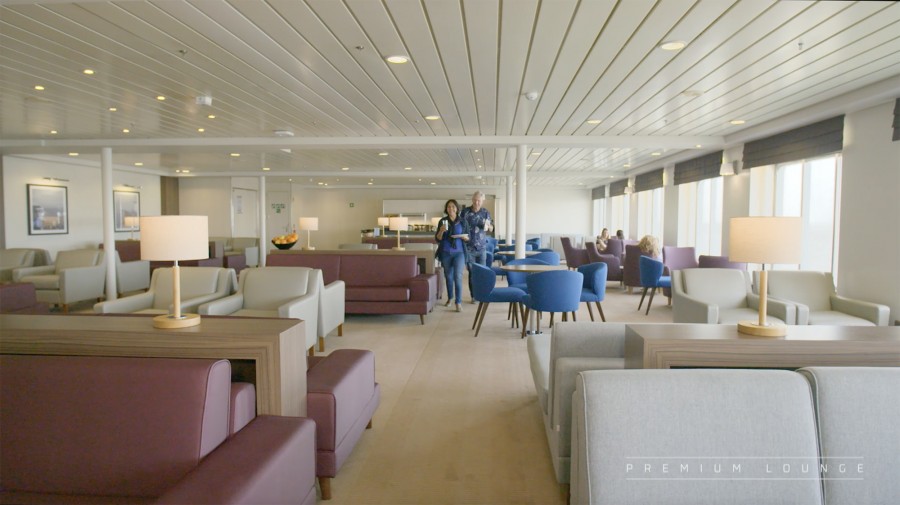 We had a pleasant crossing and pushed the boat out (so to speak) in the Premier Lounge where we gorged ourselves on petit fours, pastries and drinks. Once we docked at Calais we made our way to our first stop of the trip at a recommended Caravan and Motorhome International club site.  Camping Au Bord de L’Aisne is situated in the small village of Guignicourt in the Aisne department in Hauts-de-France and it was perfect for families. It had a swimming pool, a park and an on-site restaurant.  Top tip – the main toilet block away from the swimming pool has toilet seats and loo roll!!

We set off early the next morning for the long drive into Switzerland heading for our overnight at Camping Lido Solothurn.  The campsite is set in what looks like an industrial area although a short ten-minute stroll and we were in Old Town Solothurn.  It is well worth a look around, a beautiful picturesque town right on the river.  Camping Lido Solothurn had a lake attached for bathing but be sure to remember your water shoes as there are more than a few rocks underfoot!

Unfortunately, rain and thunderstorms set in overnight and followed us onwards to Lake Como – arriving at the family-run Camping La Riva in torrential rain.  But this didn’t dampen our spirits because we were set up in camp for a restful two days. We borrowed umbrellas from the helpful camp team and took a walk along Lake Como into the town, stopping at a restaurant for dinner.  This was the fastest pizza restaurant we have ever been too – order and on the table within 10 minutes!  Finally, the rain subsided, and we had time to make use of the wonderful swimming pool on-site and obviously just had to take a swim in Lake Como! 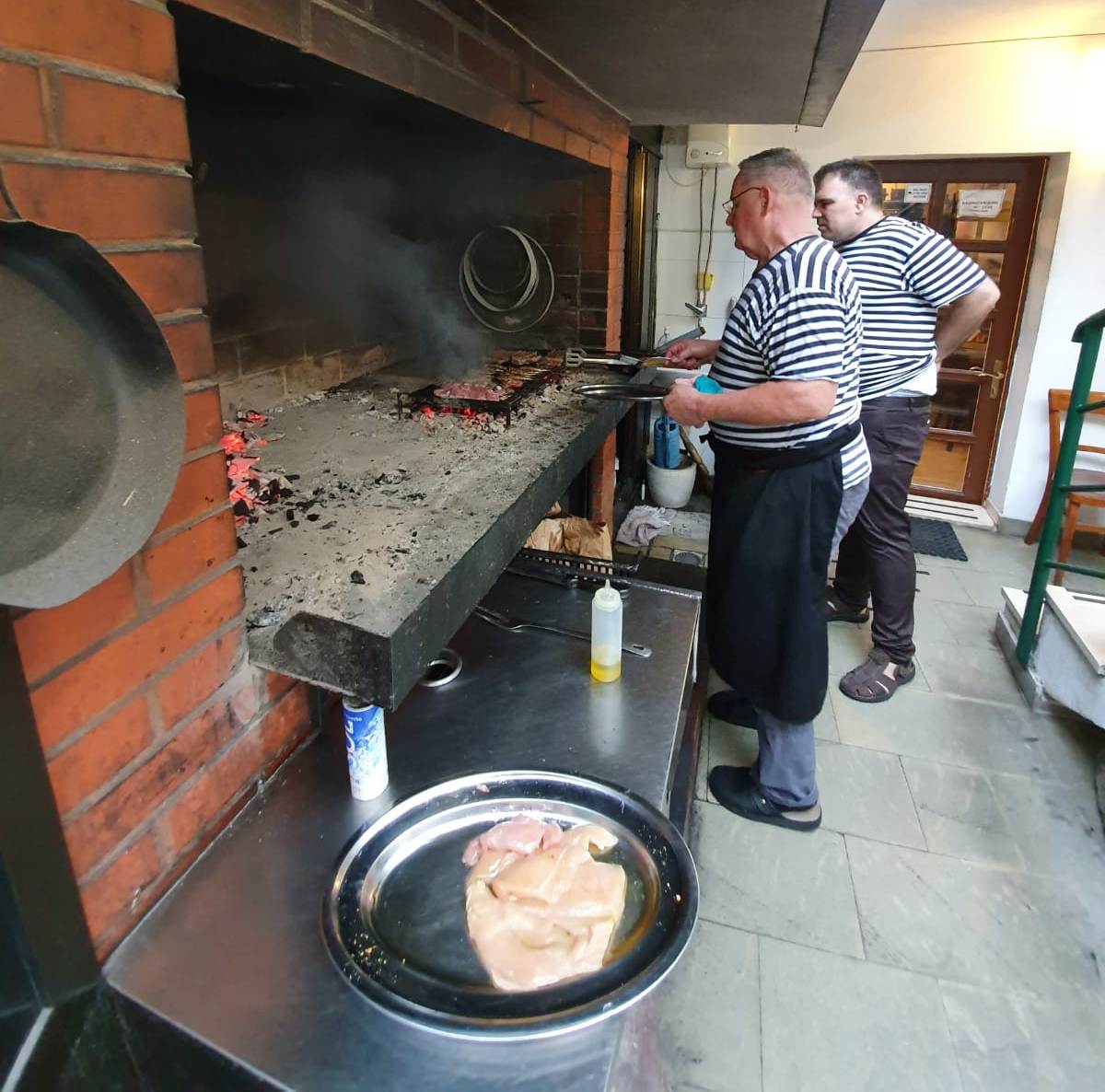 Our next stop was Lake Garda which was only a short drive in comparison to what we had been doing. After a leisurely morning spent swimming, we made our way to Camping Fontanelle in Lake Garda where we parked ourselves for another two nights.  Camping Fontanelle is right on Garda’s beachfront with its own swimming pool, pizzeria, supermarket and entertainment team for the children. With Garda almost within touching distance we just had to take a swim in it but this time we did it in style – we hired a boat for a four-hour voyage with Jason at the helm – absolute bliss! 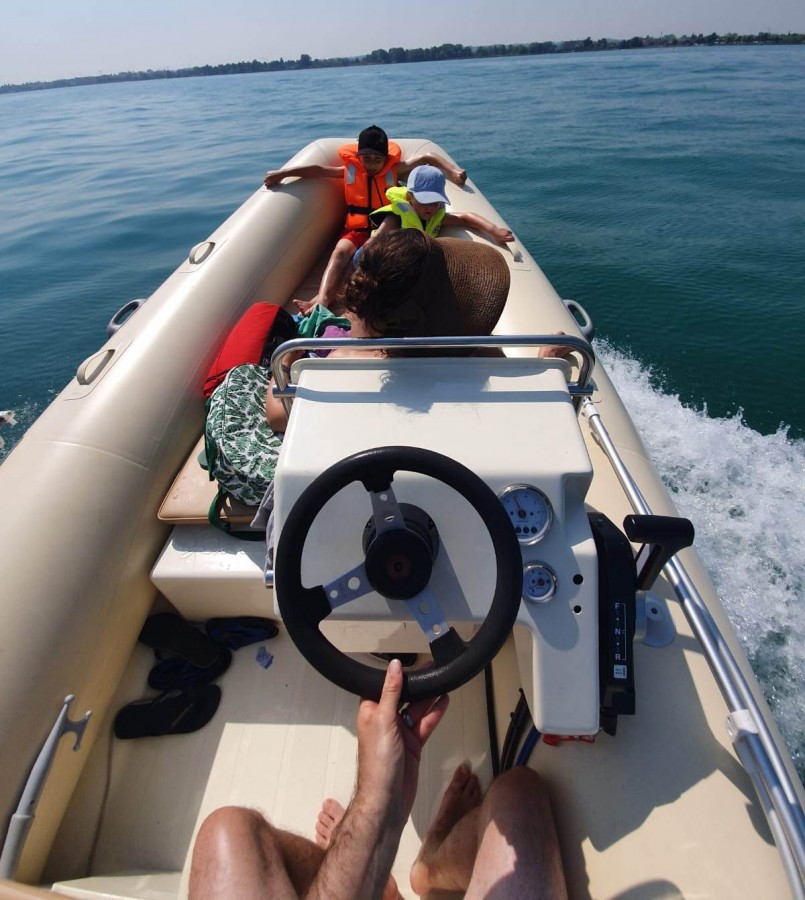 Despite all this lake fun, it was time to leave as Croatia was calling us. Our first site was Camping Park Umag.  This is a huge site with many amenities including two supermarkets, three restaurants, bars, three large swimming pools and a private beach no less.  Umag was a big hit with the kids, so much to do –  swimming pools, play parks and even a miniature train!

Sadly for us, there was little time for sightseeing as we had an early start the next morning to make our way over to Omis.  During the middle ages, Omis was famous for being the home base of the most fearsome pirates along the Adriatic coast. These days things are a lot different and the town celebrates its pirate history with festivals throughout the year.  And, just our luck, in August it was Pirate Month!  We stayed at Camping Galeb well within walking distance into the main town which really enjoyed visiting.  We climbed to the Fort at the top of the hill but if you do it be sure to wear the right footwear. We attempted it wearing flip flops and although the trail started with steps it soon turned into a proper climb!!  In 30-degree heat at 9 am and rapidly running out of drinking water, we decided to swallow our pride and turn back.

Galeb offered a small swimming pool right next to the beach which was perfect for those who wanted sand fun instead of swim fun. There were also kiosks at the entrance selling fresh bread and fruit and a large supermarket nearby.

The next day we had another early start, this time driving to our furthest point, Dubrovnik before turning back for home. We spent two nights at Camping Solitudo.  This campsite was ideally positioned to get a bus into Dubrovnik.  The bus stopped right outside the campsite and turned around at the entrance to the famous old town.  The campsite was the sister to a nearby 4-star hotel so we had access to all its facilities; a beautiful swimming pool overlooking the sea and an entertainment and animation team.  Our pitch allowed us to see the cruise ships entering and leaving Dubrovnik port – the kids loved watching the huge liners and waving madly trying to get each Captain to blow the horn! 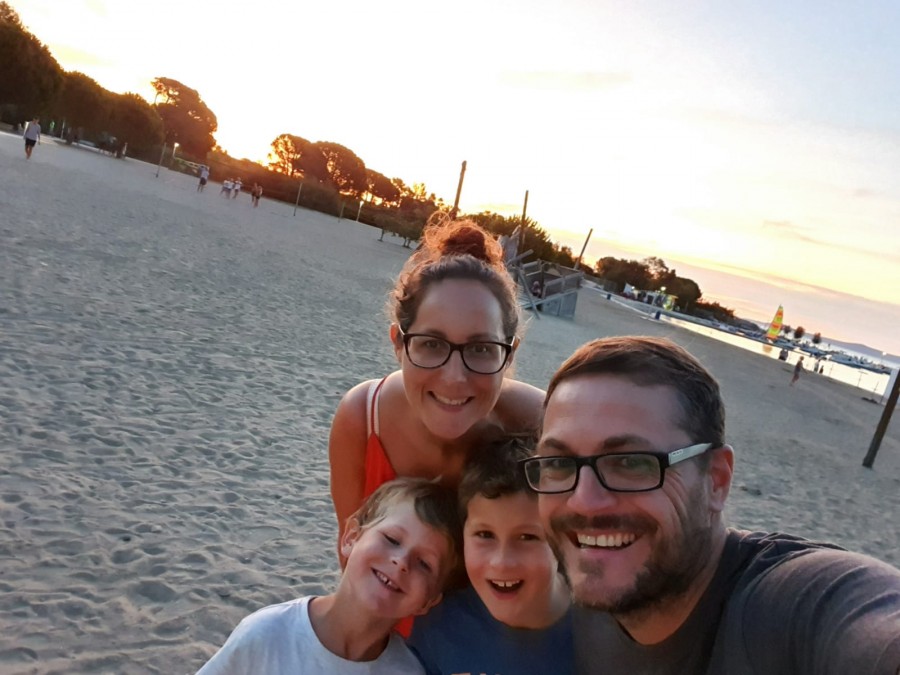 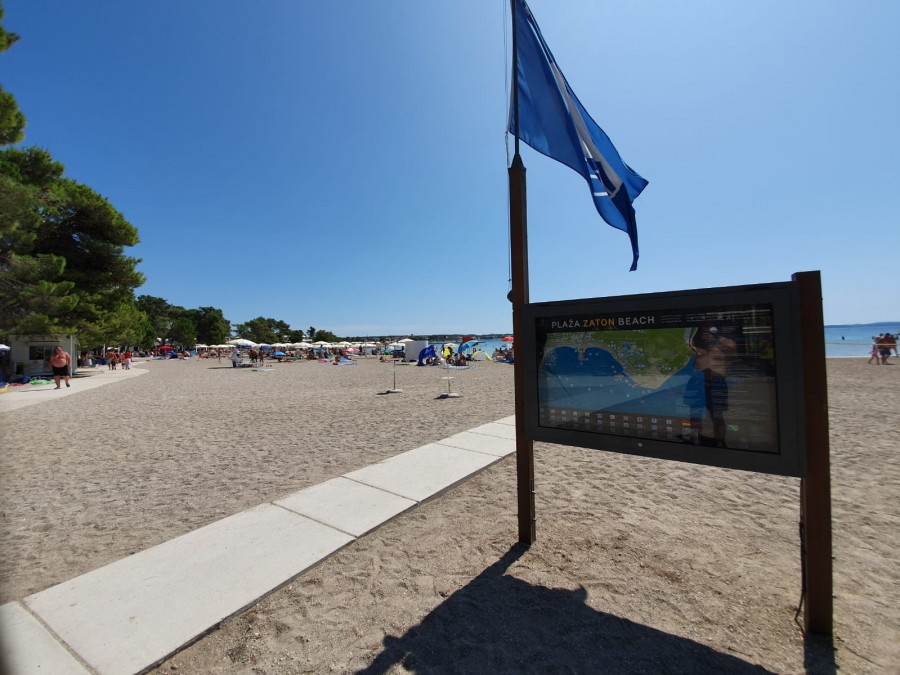 We ventured into Dubrovnik early the next morning because we had been told we should go early to beat the rush from the cruise ships and they weren’t wrong!  We spent a wonderful couple of hours walking around searching for all the Game of Thrones locations and then headed back to the campsite for a swim.  We were also treated to a tap dance show hosted at the campsite; an amazing group of American tap dancers – very random.  The following week the campsite was hosting a rock concert so just be aware if you are looking for a quiet camp – this may not be the site for you. 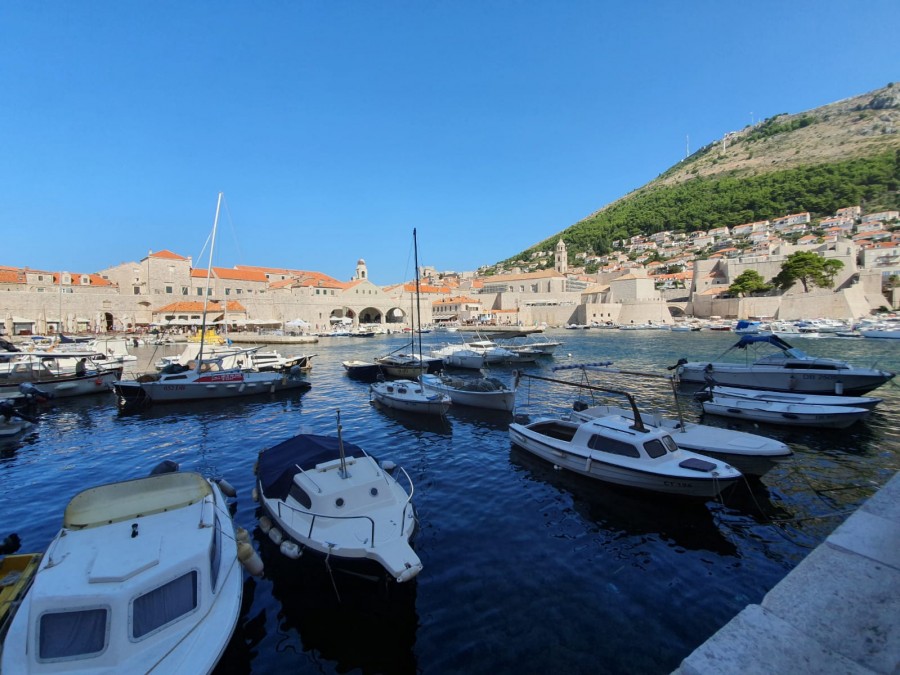 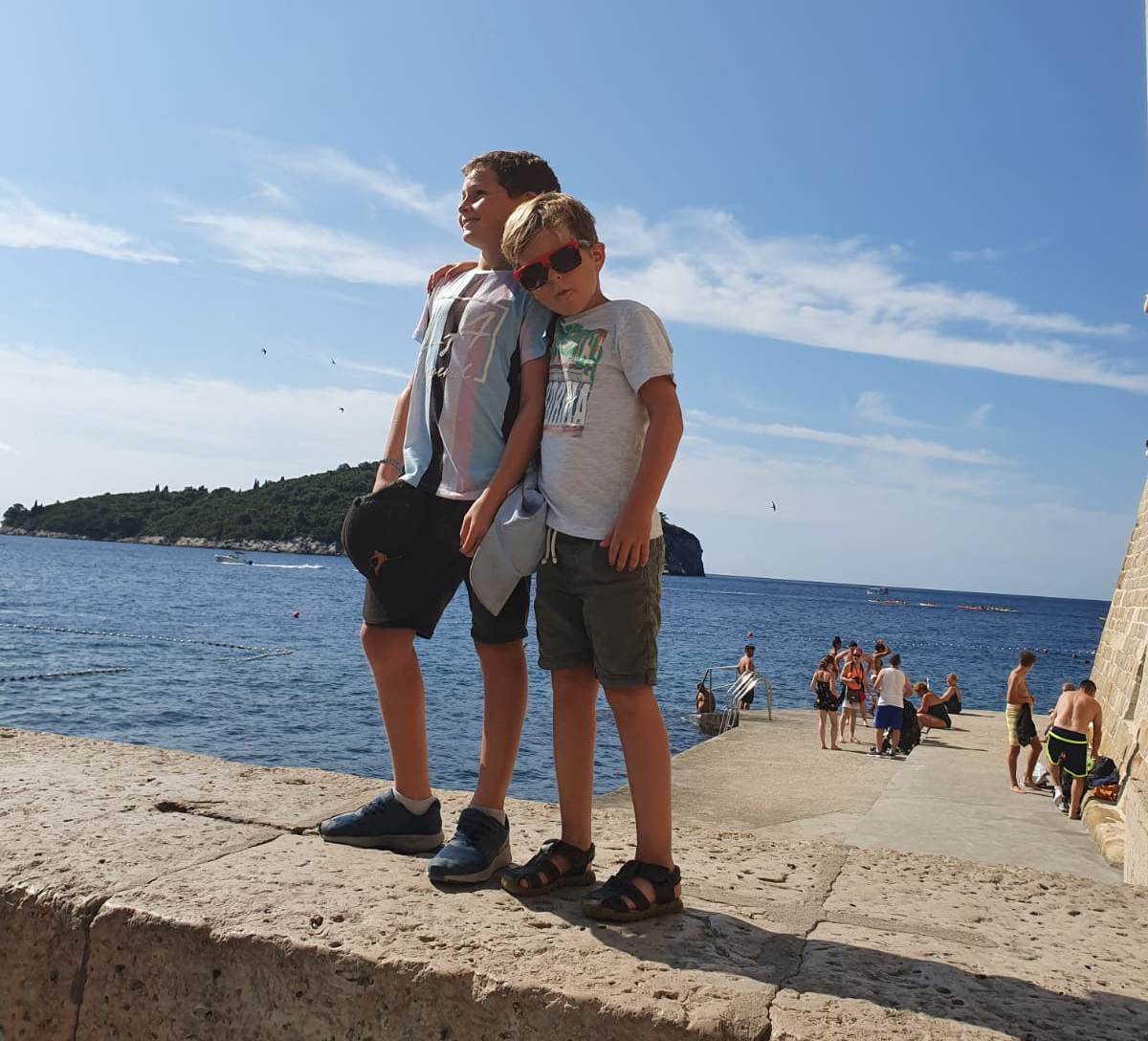 Our next stop was in Zadar at the Zaton Holiday Resort.  This site was enormous!  There were six large pools, a splash park and just about every activity you could think of. There was also a large stretch of beach with restaurants, bars, shops and children’s entertainment.  Whatever we were looking for this site seemed to have it. The site was quite far out from town so it wasn’t possible to do any sightseeing, however, we got plenty of exercise walking from one side of the site to the other!

After all those fabulous pitches and the beautiful scenery, it was time to start making our way back to France to head home. We stopped overnight in Slovenia at Camping Pivka Jama.  This site was very different to Zaton as it was back to basic camping with a very cold swimming pool! However, the site was set high up in a beautiful forest, right next to the famous Pivka Jama cave.  We could buy tickets for it at the site and it was well worth the stopover.  They also had a restaurant on-site offering a buffet breakfast for €5 per person which for us, made a pleasant change from our usual breakfast ritual of cereals and the daily bread run. 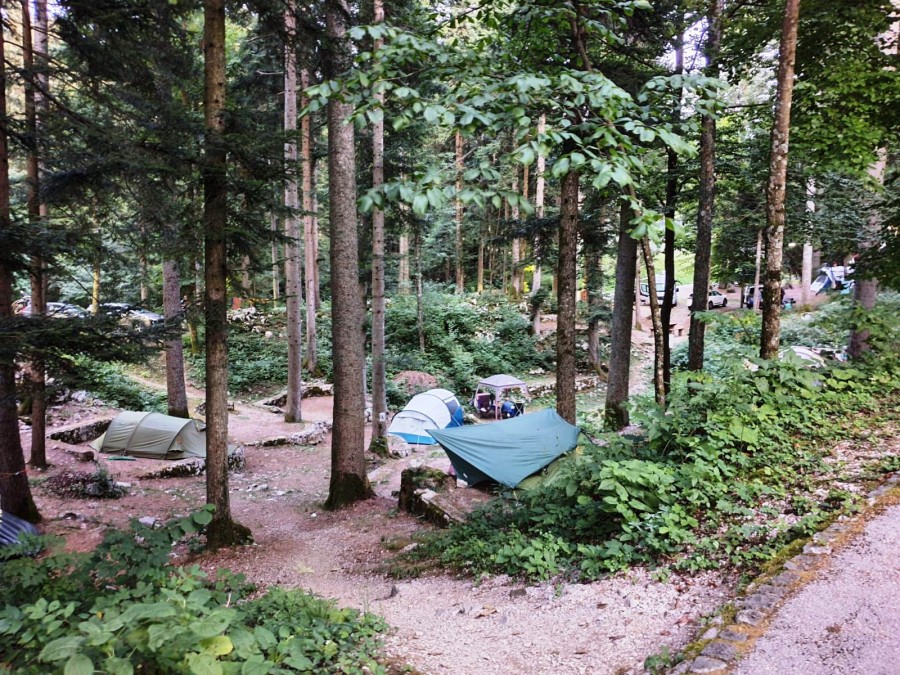 Our next stop was at Lech Camping in Germany.  This site has its own lake to swim in and provided rafts and canoes for us to use.  They also had a restaurant which came in handy as it was a Sunday and all the food shops were closed!  A note of caution, this site charges €1.50 for a glass of tap water – we were caught out with this, but at least we did our bit for the planet by not using a plastic bottle!! Apparently, this is quite normal for Germany.  There are bikes and a playground for the children to use.  A very welcoming site for families. 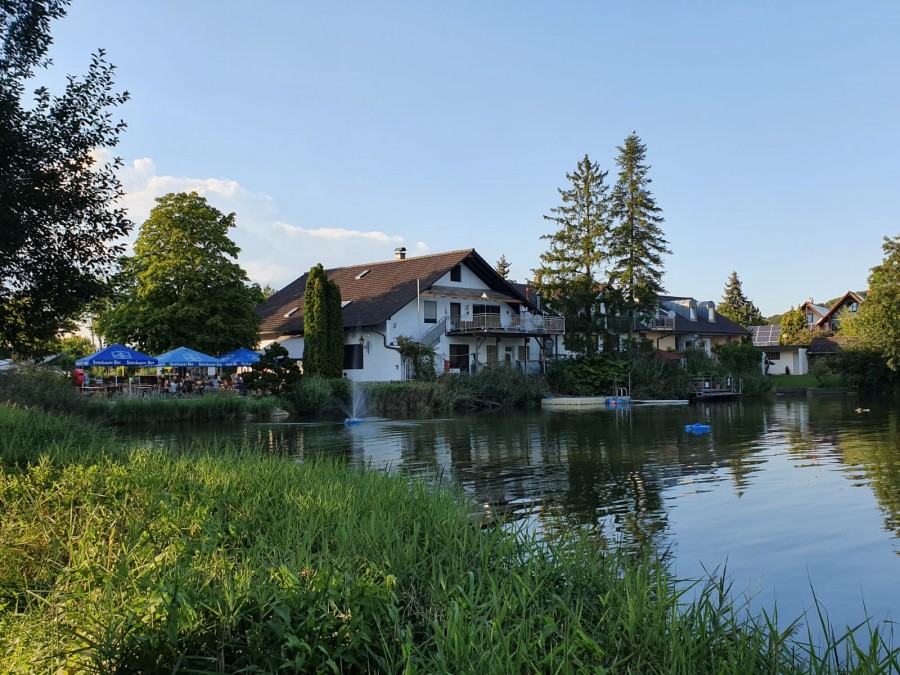 Our final night was spent at Eifel Camp in Germany.  This site is shared with holiday home owners.  There are also unisex toilets which have wet rooms.  They were very modern and clean.  The site also had a playground for children and is situated next to a nearby swimming lake.  They even offer a dishwasher for campers!  This was a nice extra after 2 weeks of washing up!!

The following morning, we took a stroll around the nearby historic town of Blakenheim before making the long journey to Calais to catch our ferry, stopping in Dunkirk for dinner before we headed home.  Our ferry had priority boarding which was well worth the supplement – first on and first off which allowed us the luxury of getting back on the move quickly. 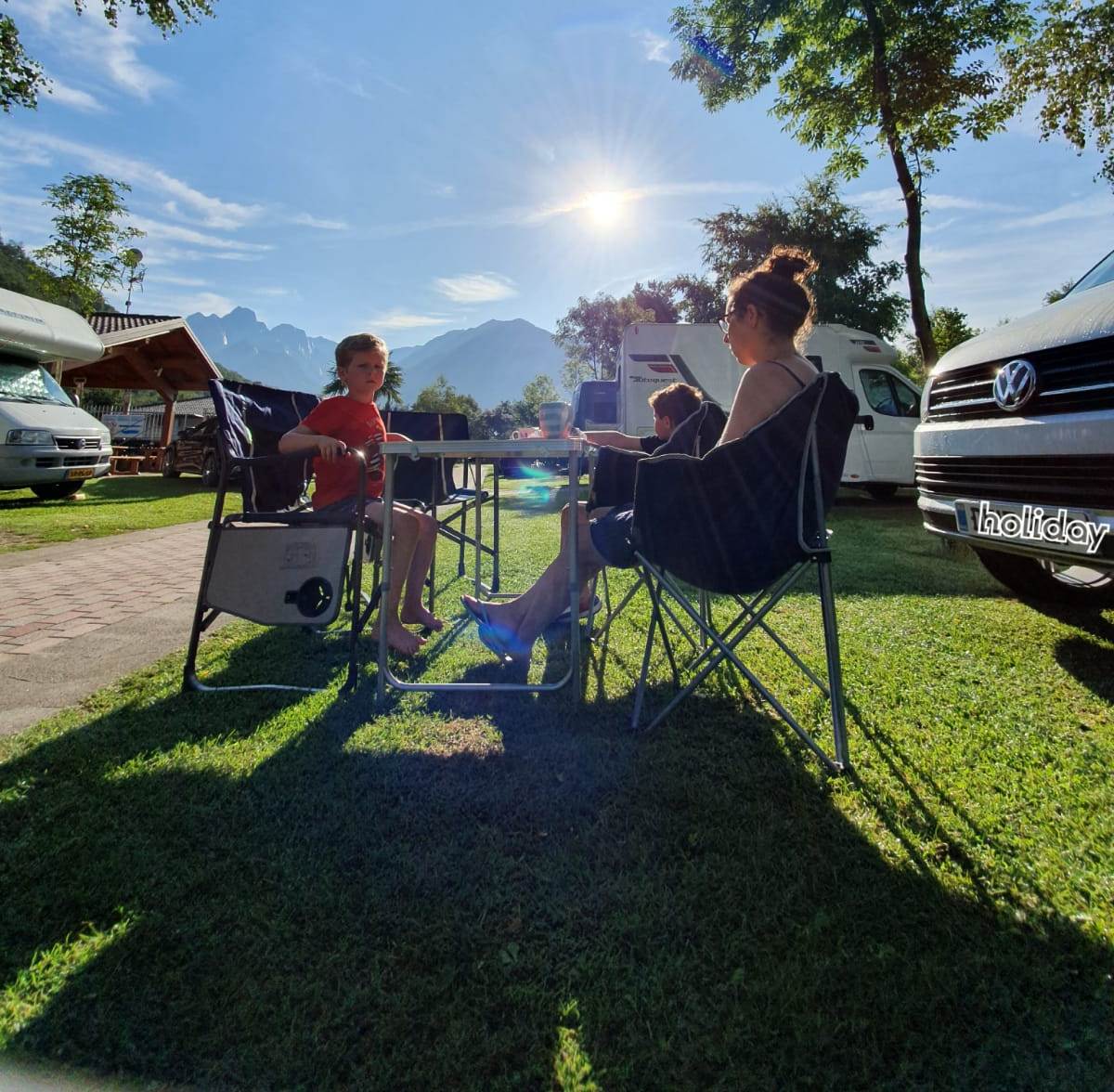 With our collection of motorway passes and pretty decent tans, our whistle-stop roundtrip tour to Croatia was complete.

Where next for our next European trip in our campervan?  We’re still thinking about it, but we’ll certainly be using the Caravan and Motorhome European network again. Their help was invaluable and the sites they chose did not disappoint.

DFDS operates regular crossings from Dover to Calas. Standard lead-in price is £49 each way for a car and up to 9 passengers. Campervan each-way price is from £91.

DFDS Premium Lounge, For an extra special crossing, why not treat yourself and upgrade get their exclusive Premium Lounge, This private lounge is open 24 hours a day and is available for all ages. For £12 per person each way, you get a glass of crisp Italian Prosecco, pastries, macaroons, biscuits and crisps, fresh fruit and hot and cold drinks.

All the above campsites can be booked via the Caravan and Motorhome International Club and the daily rates are below. Please note all pitches are standard electrical hook-up unless otherwise stated and per night rates are subject to change and were correct at the time of Carol and Jason’s road trip. 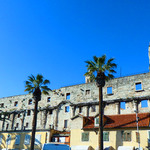 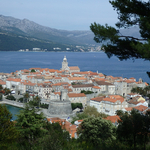 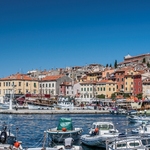 4 thoughts on “A family campervan roundtrip from England to Croatia”