Hiking the Shores of Lake Garda

The Italian lakes are justly famous, tourists attracted by their turquoise blue waters, and Lake Garda, framed by mountains rising steeply upwards, is one of the most popular.

It can get very busy here but, in spring, when the season is just getting started, it’s mercifully quiet. Even better, I’m going to be exploring the hills around the sides of the lake on foot.

I base myself in Riva del Garda, the northernmost town on the lake, at the foot of the Alps, in the opulent surroundings of the Grand Hotel Liberty. Built as a Belle Époque villa at the start of the 20th century, the interior is all ornate chandeliers, antique furniture and high ceilings. The rooms, however, are bang up to date, and there’s a heated indoor swimming pool, perfect for soaking away those aches and pain. 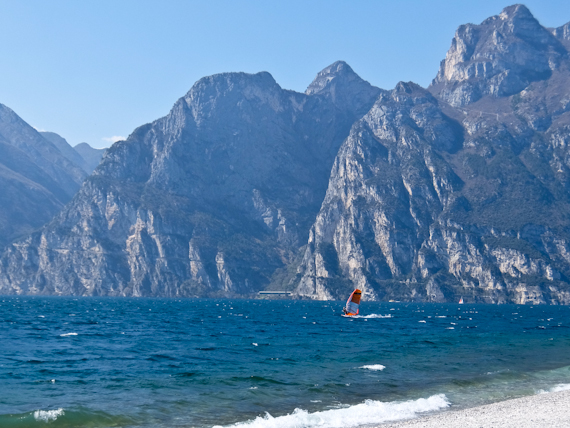 My first day’s hiking is along the Western side of the lake. Dramatic daunting cliffs rise up from the water, looking at first almost impenetrable but closer inspection reveals a narrow path etched into the rock. Unfortunately, the path is closed for maintenance so instead, I drive to the Regina Mundi Madonna statue, staring out across the lake. I leave the road to follow the old route zig-zagging down the hillside. It turns abruptly and then starts to climb, following the Ponale valley inland on a cobbled road past a shrine and the remains of a mill. 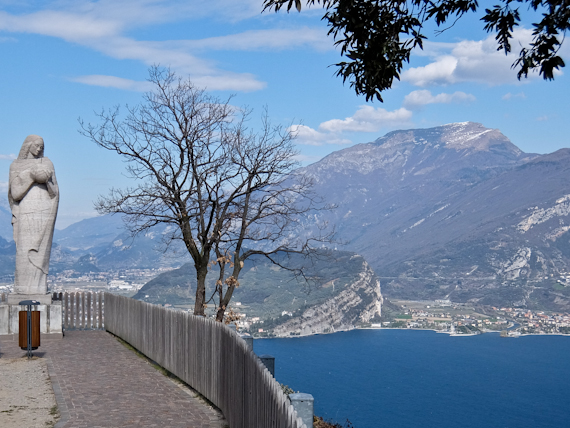 Reaching the road again briefly I take a steep ascent through woodland, passing a series of trenches from WW1. This was the front line of the Austro-Hungarian Empire and the mountain was strongly fortified. I reach the saddle Bocca da Le at 800m and am rewarded with terrific views over the lake.

Then there’s a further scramble up to the summit of 859m Monte Nodice riddled with fortifications. To reach these the soldiers cut a spectacular series of steps into the rock, the Scala Santa, and I take these down to the village of Pregasina, where I sit and enjoy a well-earned beer on the terrace of the Hotel Panorama. Below me, windsurfers and yachts are taking advantage of the afternoon breeze on the lake. It’s a short walk downhill back to my car. 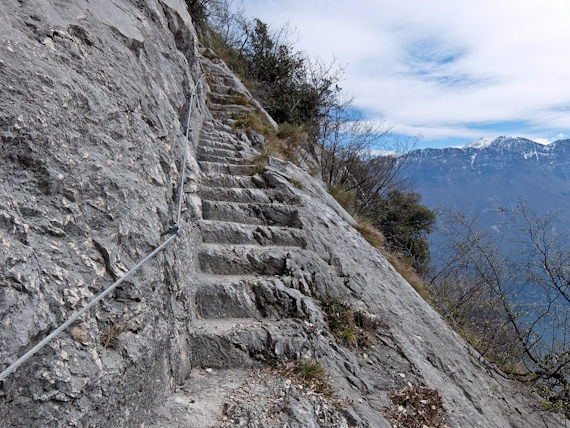 Next day I set out in the opposite direction to the village of Torbole following the lakeshore east. It’s too early for the windsurfers as the lake is like a mirror, but joggers and cyclists are out in force. After 45 minutes I reach Torbole and take the scalinata, a flight of steps up through olive groves much admired by Goethe. This leads through a Parco Avventure, designed for kids on mountain bikes, to the start of the Sentiero Panoramica Busatte-Tempesta, a path running 200m above the lake.

It leads through a Mediterranean oak forest, fragrant with aromatic plants and the spring flowers are just beginning to appear. It’s easy walking, made even simpler by a series of raised iron walkways that bridge sheer rocky outcrops that would otherwise be impassable. After an hour I’m just above the small lakeside village of Tempesta where there’s an option of catching the bus back. Instead, I climb higher up the mountain and make my way back to Torbole on a parallel path. 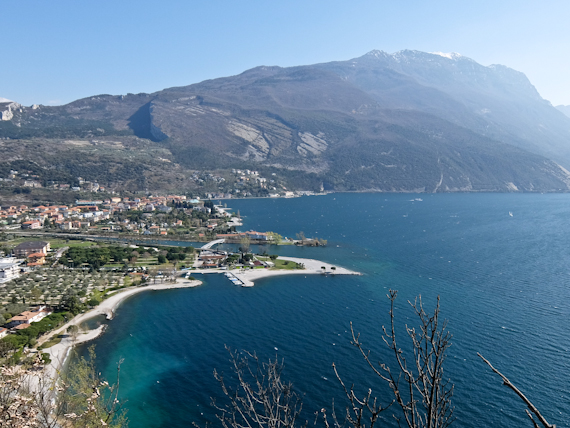 It’s still early so on my way back to Riva del Garda I decide to tackle Monte Brione, a great slab of rock, rising like a mattress from the flat northern edge of the lake. I turn off by Porto San Nicolo, next to a stone fort built in 1860, and the path leads upwards on a series of steps. Obviously, this was an important strategic point and I pass the colossal Forte Garda, recently restored, climbing past bunkers and gun emplacements, the path hugging the cliff edge

I can appreciate the thinking of the military planners as there are unbridled views of the surrounding area. Another fort, the Batteria di Mezzo guards the upper half and the summit is crowned with an array of radio masts protected by wire fences. I make my way down through olive groves planted above half hidden bunkers. After WW1 this part of Austria became the Trentino and part of Italy and the fortifications never saw battle. 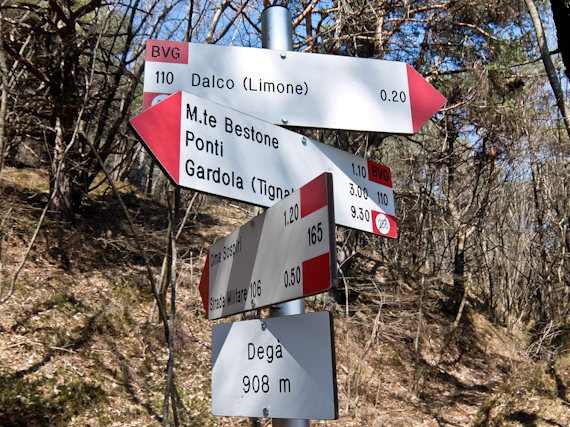 For my final walk, I’ve saved the most difficult for last. It’s a beautiful sunny morning as I drive 15 minutes south along the western shores to the beautiful village of Limone sul Garda. Space is at a premium here and the parking is expensive but it can’t be helped. Soon I’m following a stream up the Valle de Singol on a cobbled road. It’s steep and the mountain crags tower above me and I branch off left up through conifers.

The guidebook warns me about an exposed ledge and sure enough, there’s a short section where steel cables provide essential support. I’ve no head for heights but am soon zig-zagging my way up to a beautiful grassy clearing at 880m. This is really the end of the climbing and the path continues mainly on the flat through oak forests to a ruined church at Dalco. It’s pleasantly soft underfoot and a sunken lane leads to a signpost at Dega. 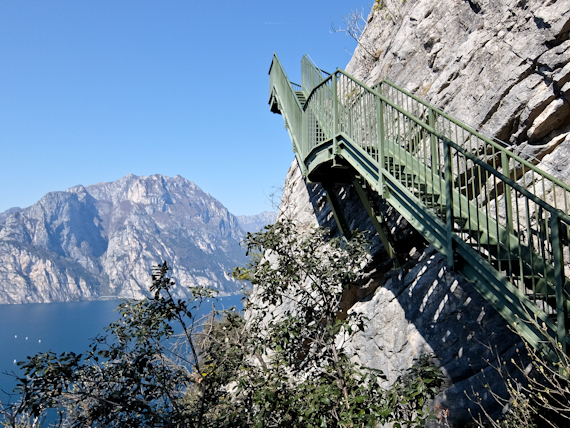 Now comes the steep descent, across gullies of scree, slightly unstable before hitting a wider stone path which twists and turns downhill. Below I can see the village of Limone, sprawling by the side of the lake and in front are the snow-covered peaks of Monte Baldo. I reach the road at Campaldo and continue down to the lake. The descent takes around an hour and, of course, I celebrate the end of three days of fantastic walking with a cold beer. 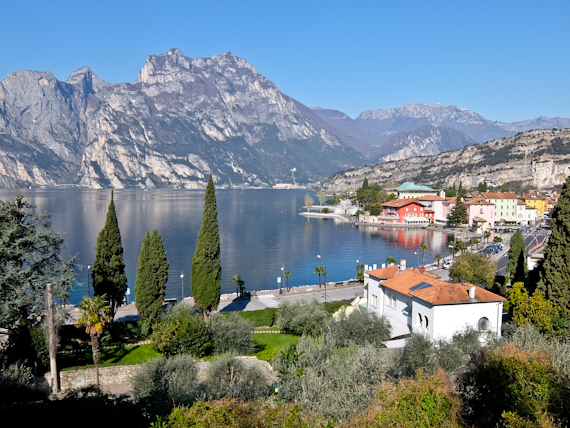 The whole area around the lake is honeycombed with trails and you can access them from any of the villages scattered on its shores. Nearby Lake Iseo, between Garda and Lake Como, is one of Italy’s well-kept secrets. It’s smaller than the others and boasts an attractive mountainous island, appropriately named Monteisola. I think that’s going to be my destination next time.

Prestige Holidays has a four-night stay departing London Gatwick on 14th May with EasyJet to Verona, Group B car hire from airport to airport and accommodation at Grand Hotel Liberty on B&B from £529 pp. T: 01425 480400

All the hikes feature in Walking Lake Garda and Iseo published by Cicerone.

A taste of Lake Garda 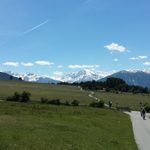