My first impressions of Jaipur, after New Delhi, was that of order, design and form and local regulations insist that all buildings in the centre are pink.  So it’s no surprise to learn that this part of  Rajasthan is one of the world’s largest producers of mined ochre.  As a motorcyclist one detail stood out: all bikers wore helmets whereas in Delhi no one used helmets – apart from the cops. 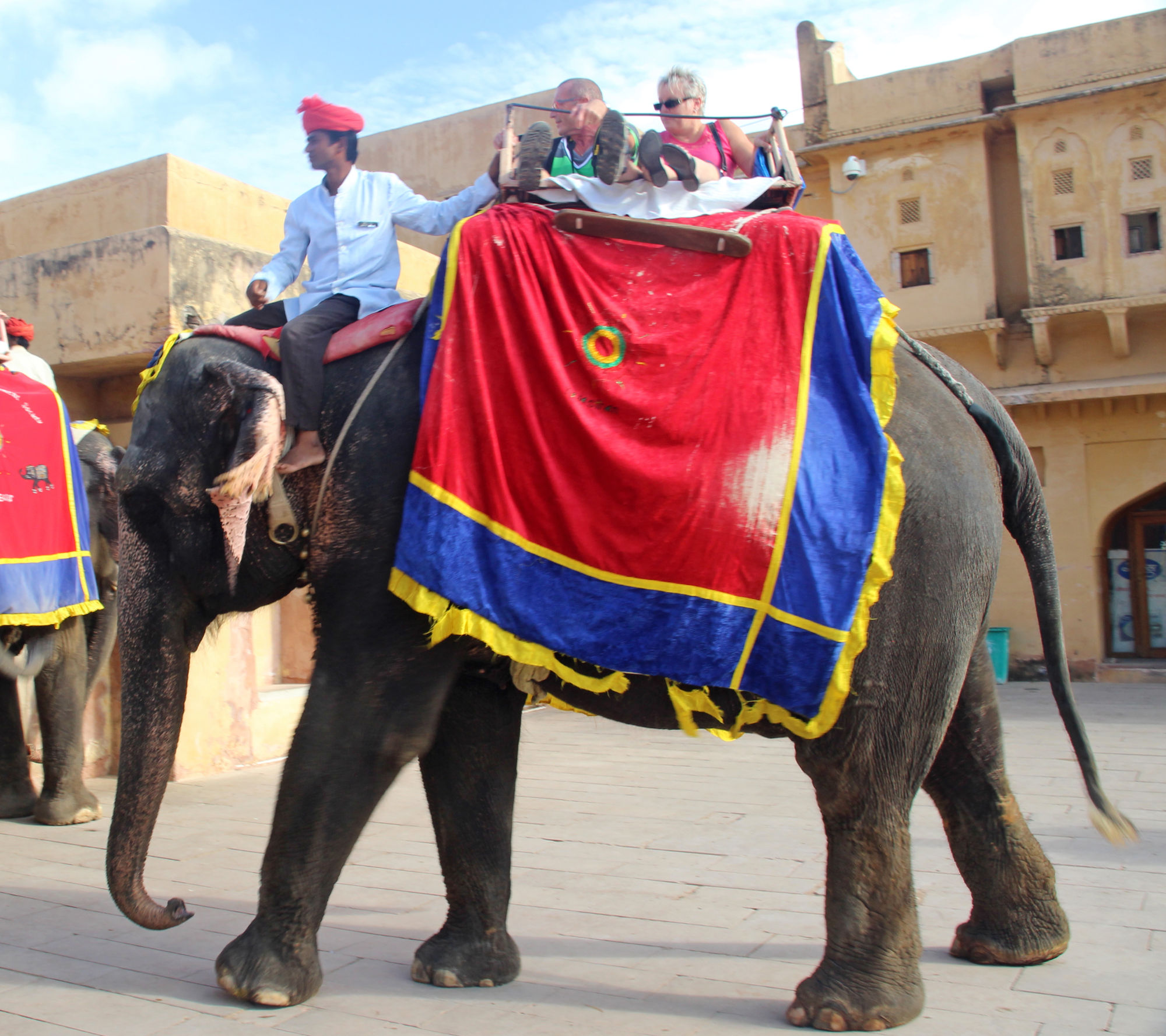 The largest feature is the magnificent fort, pink of course, and the star attraction is the elephant ride up a long hill to the main gates.  The fort is on a similar scale to Agra but has greater Moorish influence and use of water.  Some of the interior detail is outstanding with whole walls covered in mirrored glass, gold, silver and semi-precious stones.

Jaipur is also India’s main centre for precious stones some of which are locally mined with the ochre.  Jewellery shops abound and I had some in-depth exposure when I accepted an offer to go on someone’s roof to get a clear, squared up,  photo of the Hawa Mahal.  To get down I was led through about eight jewellers and nearly missed the coach. 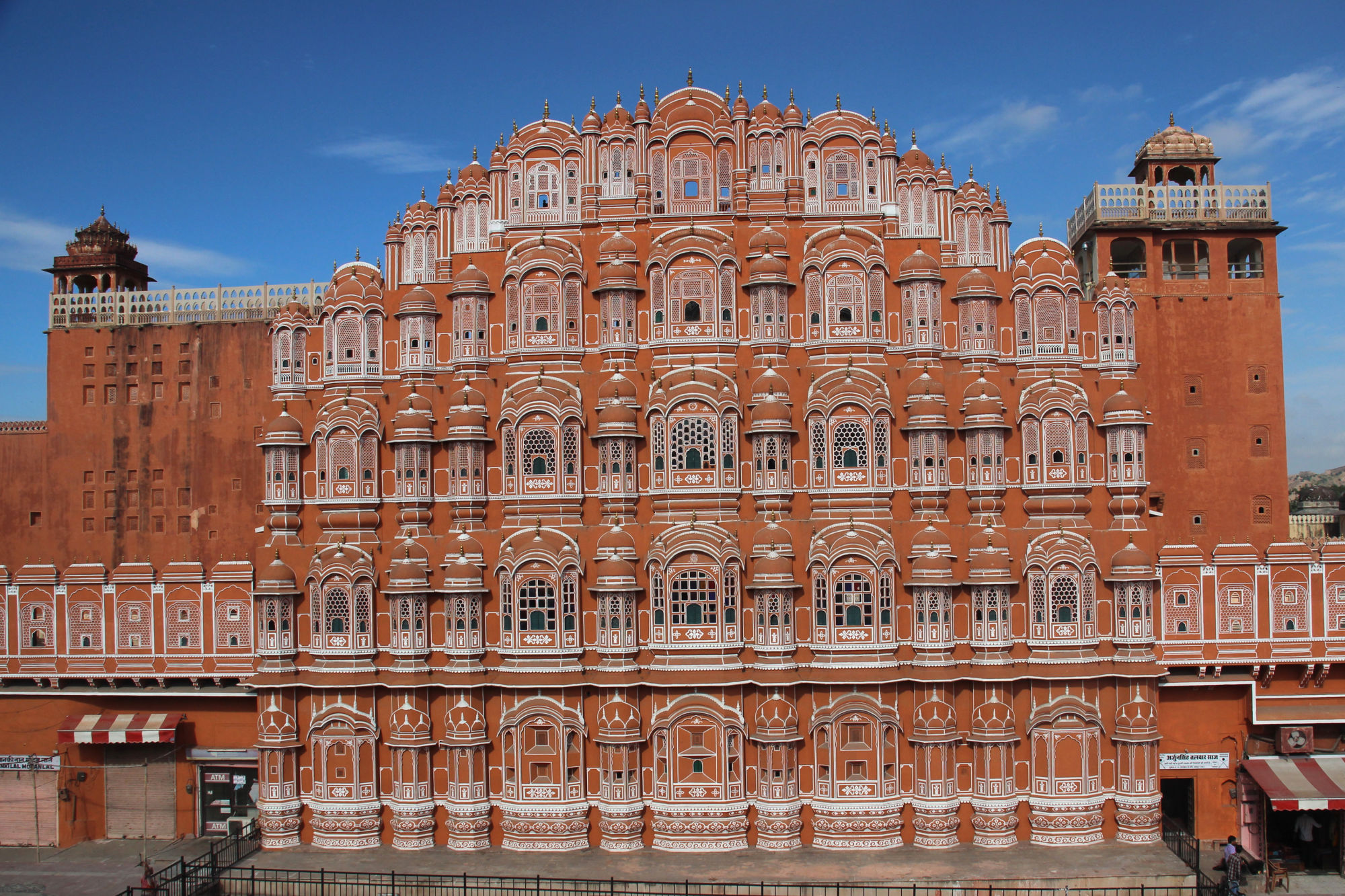 The Hawa Mahal or House of Breezes was built in 1799 by the Maharaja of the time as “women’s’ chambers” with 950 windows so that air circulated in the hottest month. On either side are shops with dazzling displays of pottery, fabrics, carvings and many have artists and craftsmen at work.  Jaipur has great style and it would be no problem to spend a week there.

I want to try India’s Golden Triangle Tour. How much is it?

The whole package, supplied by South Quay Travel, costs £980 pp half board using Air India with transfers and site admissions based on a group of 25+ passengers (2014 prices)

Three hotels were included in the package:

Clark’s Inn Hotel in Gurgaon, about 20 miles from the centre of New Delhi.  Mansingh  Palace Hotel,  Agra; Hotel Mansingh,  Jaipur.  My rooms were comfortable but fairly basic. Some of the group had problems with their rooms and requested changes.    The breakfasts and buffet dinners were good.

For a first visit to any of the large cities, I strongly advise going with an organised tour entirely for reasons of comfort and efficiency. This does not necessarily apply to young experienced travellers.  I accompanied a group of 34 from the Sports and Social Club of a Government head office. The package was organised by South Quay Travel who specialise in providing all the bookings, and “ground handling” for groups of over 20 travellers.  They, like any experienced tour operator or travel agent, can advise on preparations for an India trip including visas (£90 pp) and necessary vaccinations. This is covered by NHS websites.

Coming next: we take to the hills

In the second part, we leave the coach and travel on a unique mountain railway to Shimla (formerly Simla), sit on a Yak, see the highest cricket pitch in the world and the small office where the whole sub-continent of 400 million people was ruled every Summer until August 1947.