Joe is driving me to Covington, after picking me up at Cincinnati airport, which happens to be in Kentucky and not Ohio but that’s another story. The point is, he casually mentions “I’m picking up Tony Bennett next.” I can’t help feeling a little bit special now, having Tony play second fiddle to me, clearly, I’m thinking, Northern Kentucky is a very welcoming part of the world. Joe it transpires, is the Covington chauffeur to the stars; Elton John, and even Kiss front man Gene Simmons are regular passengers. I feel my special status expanding by the second.
Covington, is the gateway to travelling Kentucky, itself the gateway to the South, perched on the banks of the Ohio River, with the skyscrapers of Cincinnati on the opposite side guarding the Ohio frontier. These days, the bridges only carry commuter traffic but it wasn’t always like that. Before the Civil War, Kentucky was a slave state and Ohio was considered a “free” state and many black slaves attempted to travel the “Underground Railroad” across the river to freedom. It wasn’t a real railroad, merely a conduit network to aid escapees. 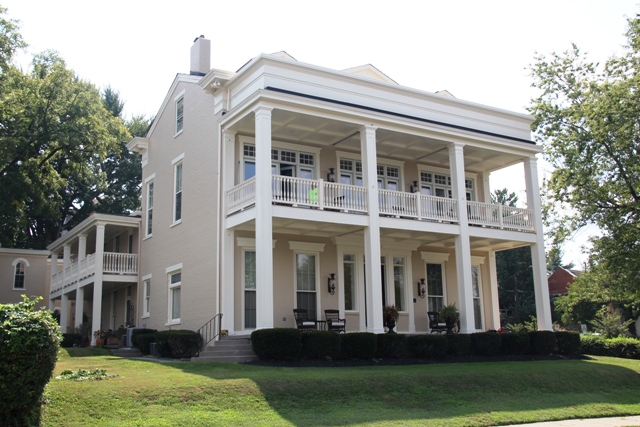 Joe drives me by some of the original 19th century mansions along Covington’s riverfront, once home to notable families many of whom remarkably were “conductors” providing a temporary safe house for escapees along the railroad.
The wonderful National Underground Railroad Freedom Center just across the Roebling Bridge in Cincinnati, not only chronicles the history of slavery and emancipation in America, but draws parallels with human rights movements all over the world today through stories, exhibits and film. A real slave pen used by slave trader John Anderson is particularly moving for me, as is the rare signed copy of Abe Lincoln’s 1863 Emancipation Proclamation. 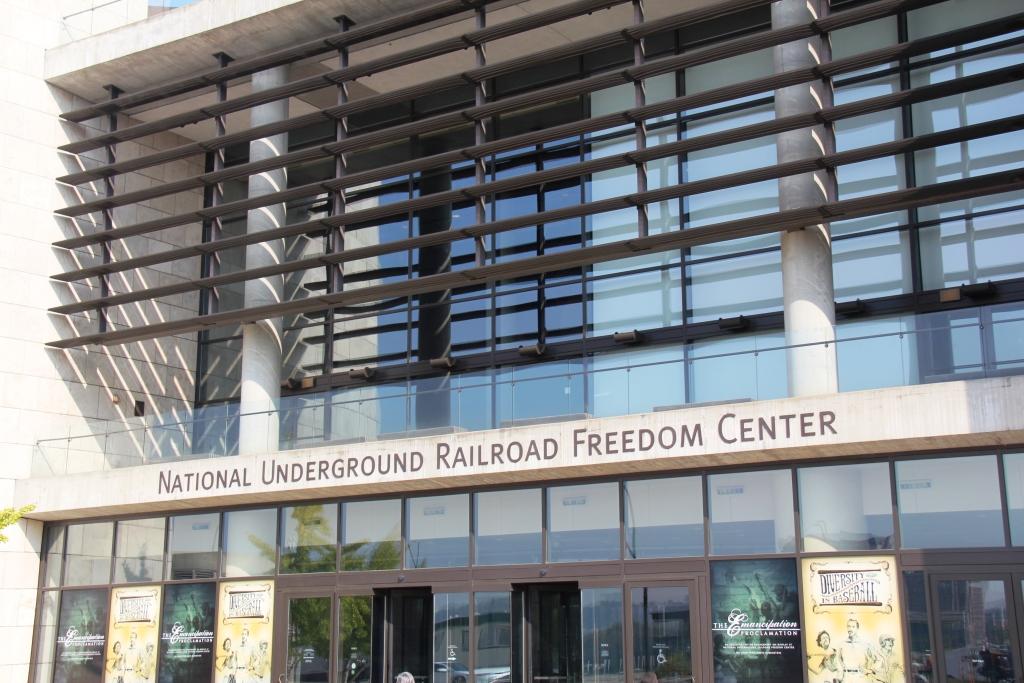 Back in Kentucky I feel a strange foreboding as I drive into nearby Newport, once hailed as the first Mob run “Sin City” way before Vegas coined the phrase. Such a reputation seems far fetched as I pass the Newport on the Levee entertainment complex with its restaurants, bars and the very impressive Newport Aquarium whose 1 million gallons of water are home to a myriad of marine life from penguins to sharks.
Still, a clue reveals itself in the shape of Brad from Ultimate Newport Gangster Tour, complete with black shirt, white tie and fedora. The only thing missing is the violin case. Newport’s rise to gangsterdom was borne from working class German immigrant roots, (there is even a neighbourhood nearby called Over-the-Rhine) where beer drinking on Monmouth Street was simply a way of life. Prohibition put paid to all that and illicit speakeasies attracted the heavy guns and before long the likes of the Cleveland Mob, Peter Schmidt and George Remus were running casinos, prostitutes and booze. 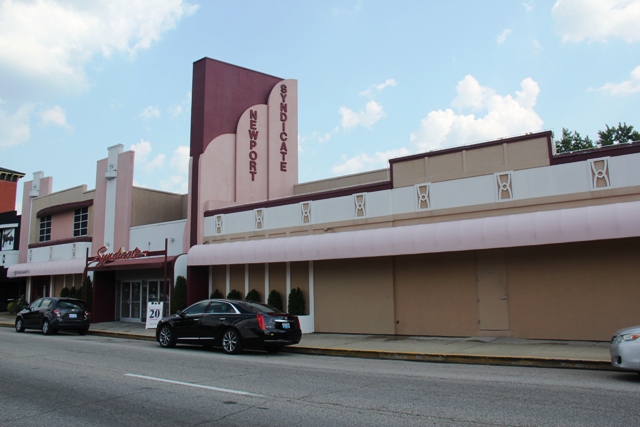 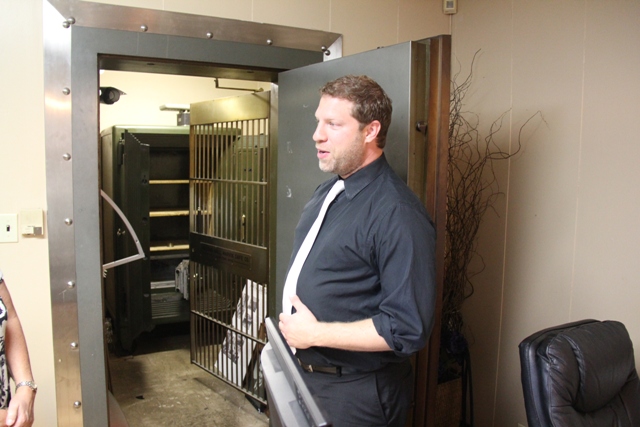 We meet at the Newport Syndicate nightclub, once Glenn Schmidt’s notorious Playtorium Casino, which hasn’t changed much since those kitsch speakeasy days. The giant safe is still in the back office, so heavy it can’t be moved. Brad shows me some of the former casinos around Monmouth Street, now transformed into trendy bakeries and coffee shops. Larry Trapp is a local character who owns the Northern Kentucky Gambling Museum once the Mustang Club. He’s spent a lifetime collecting authentic Newport gambling memorabilia and still displays the former club’s wooden mustang horse head sign. I point out two X’s drawn on the carpet “a shootout” he tells me “someone needed to be taught a lesson”

I quickly move on. 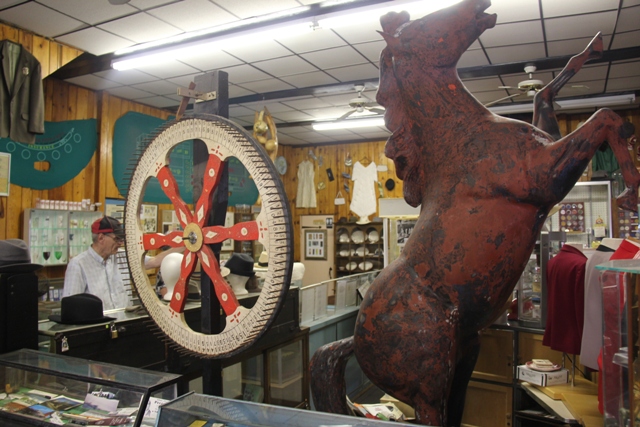 Hidden away in a Covington side street is Donna Salyers’ Fabulous Furs empire.. The queen of faux furs has a Hollywood list of admirers from Loretta Swit to Oprah Winfrey but with a price tag that is surprisingly modest. She meets me in her showroom and tells me “we had no money and I had to visit New York, so I learnt to sew and came up with a fake fur coat that looked so real I was stopped in the street and asked about it.” The rest is history. I try on a half length men’s white fur that looks more pimp than proper on me, but they do look quite amazing and very very real. 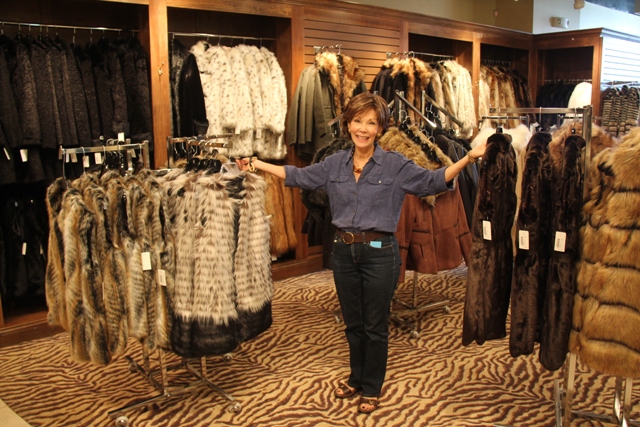 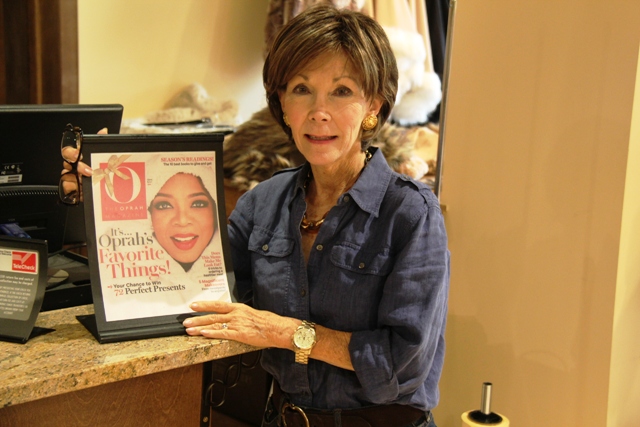 Just a 2 hour drive and I’m in Louisville, the home of the “Slugger”, the famous Kentucky Derby at Churchill Downs racecourse and 21c once rated the best hotel in America. I’m here though to revisit the boyhood home of Muhammad Ali, the man I still regard as the greatest heavyweight boxer of all time. The Columbia gym where he trained at south fourth street is now used as a car park, but I drive out to the west end , the other side of the town “line” distinctly black and poorer than the upscale east end, to Ali’s former home on Grand Avenue. The simple but dilapidated clapboard house I remember visiting is now thankfully being restored by boxing fan and real estate investor Jared Weiss who plans to open it as a museum in 2016. 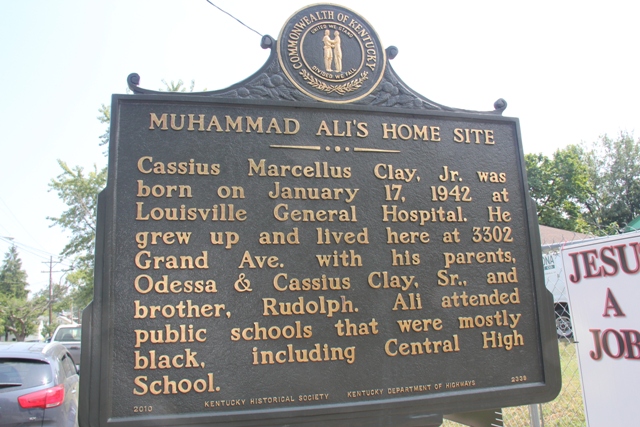 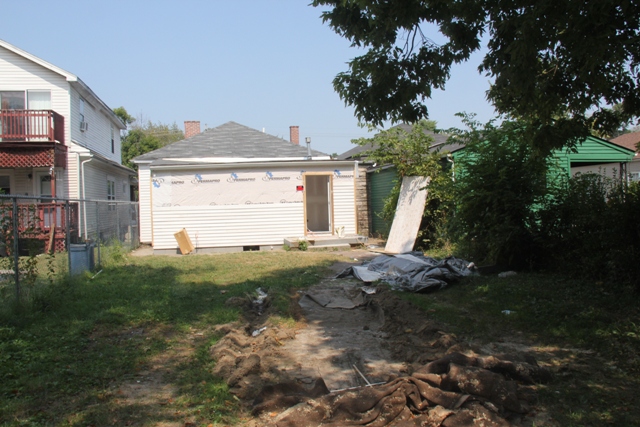 Back in downtown Louisville I stop for lunch and a Mint Julep at the legendary Brown Hotel, home of the epic turkey, cheese and tomato Hot Brown sandwich and bump into General Lee and his wife in all her southern finery. For a moment, I feel I’ve fallen into a time warp and joined the confederacy, as a group of other southern gentlemen and ladies similarly dressed join them. Fortunately it is just a re-enactment gala and I’m still very much in the present day, but here in the historic Brown Hotel it is all too real.
Speaking of which, on the route across to Lexington, is the battlefield of Perriville, one of the bloodiest battles of the civil war and the one that changed the outcome of the war for the North. Little has changed here as I walk the hills; groups of cannon lie at strategic points marking the spots where decisive fighting took place. I stop atop one hill, the only person for miles around, and as I read a description of the battle that took place here, I get real chills. 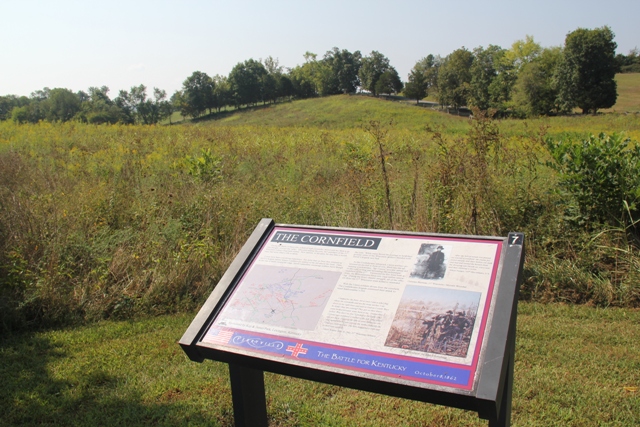 The route to Lexington is Ironically lined with turn offs for famous Bourbon distillers like Makers Mark, Woodford Reserve and Wild Turkey. I say ironically because I am spending the night at the Shaker Village in Pleasant Hill, 3,000 acres of rolling Kentucky land once the home of the Shakers or to use their full name, the United Society of Believers in Christ’s Second Appearing, a breakaway community from the Quaker movement. They believed in celibacy, clean living and equality and pacifism but perhaps better known for architecture and furniture. 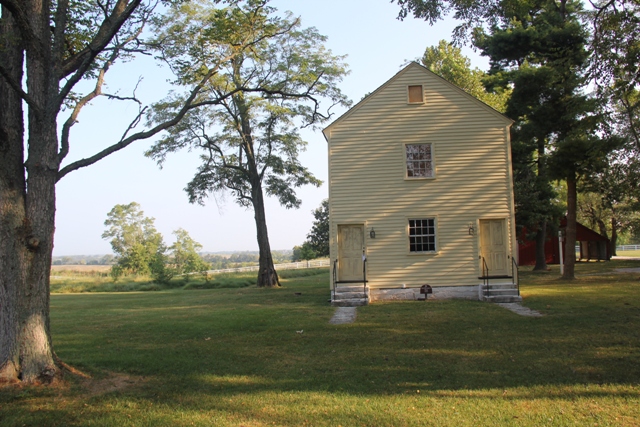 Shakertown as its known locally is now a restored Shaker village country retreat offering excellent accommodation, food and wine and at the the same time providing an insight into Shaker life. Ben the Preserve Manager takes me on a tour of nearly all the 3,000 acres, justly proud of the vast habitat he’s built. A veritable haven for butterflies, fauna and wildlife. “The Shakers were very self sufficient” He tells me “growing herbs and vegetables, eating fresh food and refraining from alcohol” 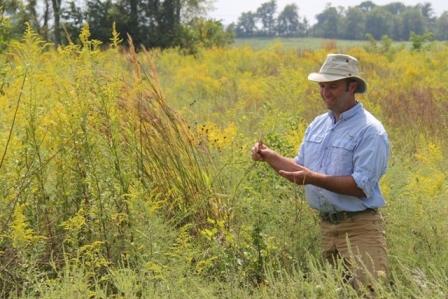 Later, as I sip a rather good glass of red wine in the Shaker’s Trustees Table restaurant  I think to myself how those former residents would be so proud if they could see me now.

Lexington beckons now, America’s horse heartland. Surrounded by spectacularly manicured stud farms and everything equine, Lexington’s centre is anything but. Smart mansions shake hands with simple dwellings, historic squares mix it with basement blues clubs and trendy micro breweries repopulate old garages and warehouses. Among all this, the Graz Inn sits serenely in her quiet courtyard, a haven from Lexington’s energetic life and I welcome her embrace for the night.
A new day dawns and finally horses are front and centre as I trot out for breakfast at Keeneland Racecourse. 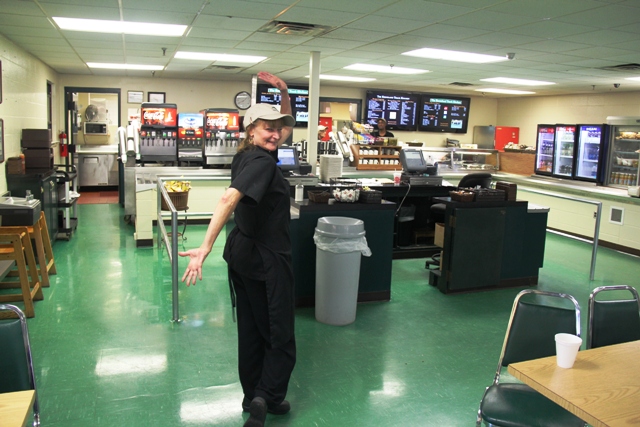 The Track Kitchen is where all the jockeys and trainers stock up with energy from 6am. My much more respectable time a couple of hours later means I miss the morning rush. In fact, just me and Jim, a jockey from Ireland, are the Kitchen’s only customers. The two of us and server Joan, delightfully loony lady who fancies herself as an English actress. Mercifully, Joan’s demonstration of the English language is interrupted by her boss getting her back to work so Jim and I bolt for the door.  Just before he leaves, Jim gives me a tip, ” go watch the horses exercising around the back”, so, I do just that, in time to stand with the trainers and watch their horses being put through their paces on the track. Perhaps it was the confident way I strolled up to the track that made them think I was an owner up early to check out my investments, but I was greeted warmly and tried to look like I knew about horse fitness. 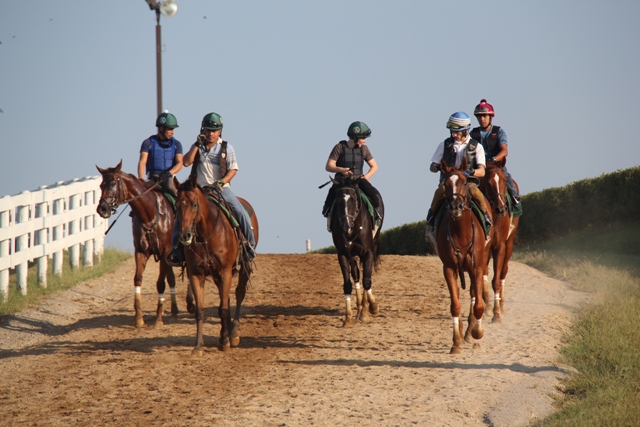 As I leave Lexington for the Tennessee border, I feel Kentucky has surprised me. A lot. I came fully expecting plenty of horses, bourbon and bluegrass and ended up experiencing a state with many more aspects to it. Gangsters, bootleggers, freedom fighters, war heroes, entrepreneurs, boxers, musicians and a whole other cast of characters.

And let’s not forget Joe. After all he put me before Tony Bennett.

Andy Mossack’s Kentucky experience was part of a joint Kentucky and Tennessee road trip called “Only in America tour” available through Bon-Voyage from £1,695 per person and includes car hire, flights to Cincinnati Ohio and return from Atlanta Georgia, 14 nights mid to high end B&B accommodation and a personalised North America road book with full itinerary and travel tips. 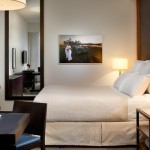 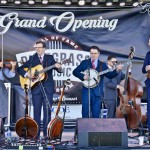 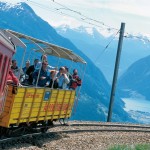