Restaurant kitchens are pretty hostile places at the best of times, but head chef Anthony Raffo might just have one of the most stressful.

ANGLO@TRADE is a new residency for Mark Jarvis’s ANGLO Restaurant within TRADE Soho. Owned by restaurateurs and Master Sommeliers Xavier Rousset and Gerald Devaney, it’s a private members club in Frith Street, exclusively for people within the hospitality industry. A place where chefs, sommeliers, bartenders, restaurant and hotel managers and other hospitality professionals can come and hang out. Cooking for your peers must be the ultimate test, but Ruffo seems unperturbed. “Doesn’t matter to me who’s ordered the food, I’ll always give it my best shot regardless.”

TRADE’s new partnership with Anglo seems a match made in heaven. And to tap into Jarvis’s fanbase, TRADE has recently opened its doors for non-members to book a limited number of tables for the five-course tasting menu. 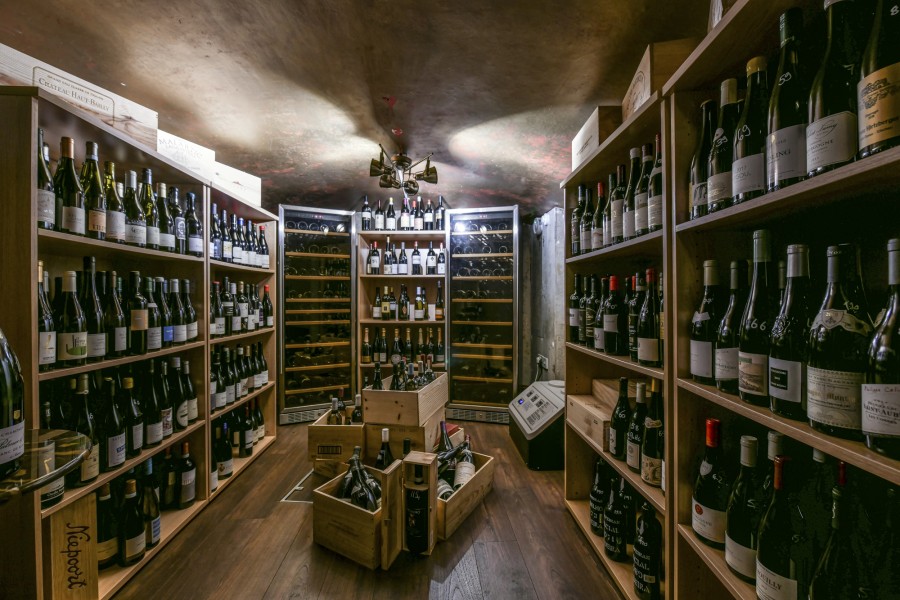 There’s an added benefit too. The club’s Coravin cellar stocks many fine wines at lower prices than would normally be the case and non-members would have access to that too, as well as the club’s numerous wine tasting opportunities.

So, it was with much anticipation I was buzzed in at the nondescript door opposite Ronnie Scott’s and warmly greeted downstairs by Manager Domenico. The club takes up a generous basement space dominated by a large bar but with areas to lounge about in. I particularly liked the couple of side nooks, perfect for a few friends to hang out with a few drinks and snacks. The dining area was at the far end, just a small group of tables but all very informal and relaxing, and quiet for a Saturday night.

“Saturday nights tend to be quiet here,” Domenico told me, “most of our members are working.”  Good point. Not many places in Soho you could have a nice quiet dinner on a Saturday night. I was liking this more and more. 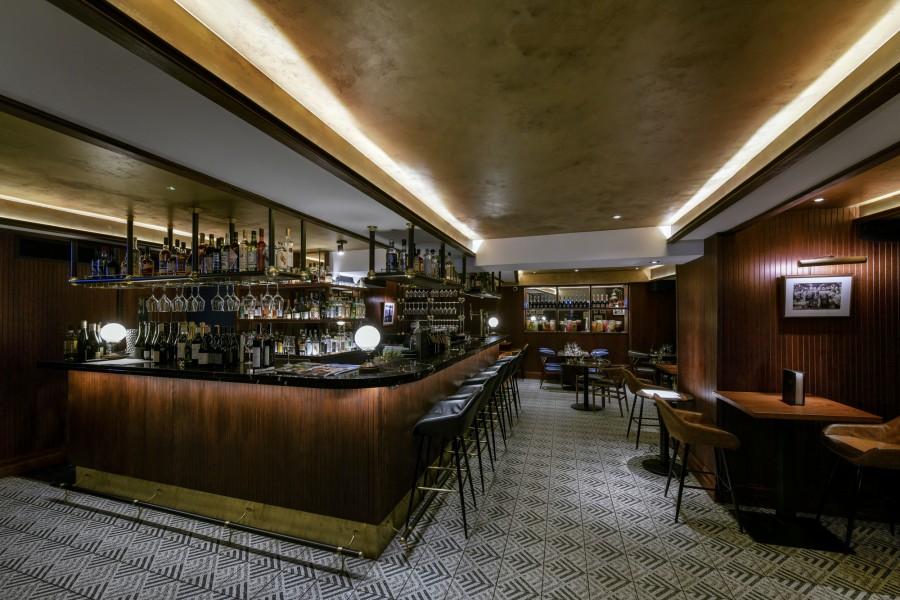 We were here to try the paired tasting menu which, I was promised, contained much of Raffo’s penchant for foraging wild edibles and fermenting them; evidenced by a neat row of large jars on a nearby shelf quietly doing their thing to whatever lay in liquid far too dark to make out.

First up, a snack course of fermented cauliflower soup with chives and two crackers; gluten-free buckwheat, the other puffed wild rice. There’s a distinct cheesy tang to it which Raffo puts down to the fermentation. The chives bring out an added onion mix which pairs with anything cheesy. Washing it down with a chilled French chardonnay made it all the more enjoyable. 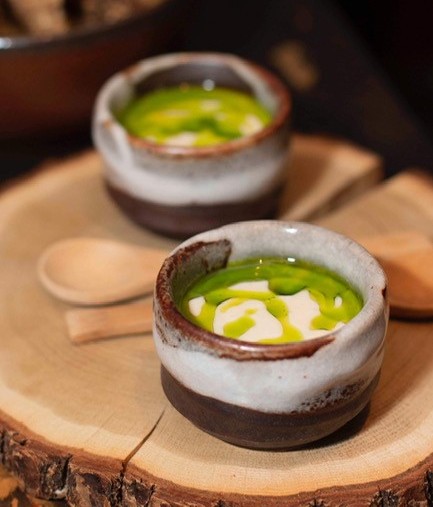 The next one really raised Mrs M’s eyebrows; blowtorched mackerel with egg yolk (cooked in the shell for an hour at 65 degrees), fermented black garlic and carrots. “best mackerel I’ve tasted in a long time” she murmured between bites. High praise indeed. Most slow-cooked 65-degree eggs I’ve had are served as is, but Raffo whisks the yolk and white and adds salt and rapeseed oil to counterbalance the oils of the mackerel. Well thought out and a very impressive dish. Another surprise was the glass of 2006 Hungarian Szeremley which was pretty triumphant pairing. 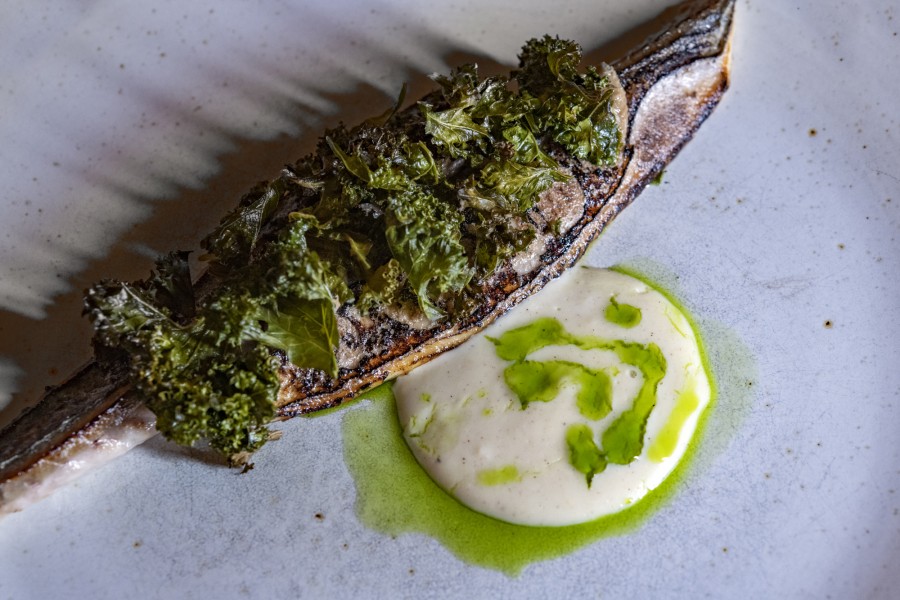 This really was all going rather well. The excellent food. The soft music. The relaxing ambience.

Our third course was a venison haunch with a very tasty bread sauce, toasted sunflower butter and kale. Anthony materialised from his kitchen to point out a couple of background points. “I used to eat bread sauce sandwiches as a kid cleaning up our family roast dinners so pairing it with venison seemed like a natural combination. Also, the sunflower butter is so people with a nut allergy can enjoy the same nutty taste and experience as other diners as a sunflower is a seed, not a nut but once toasted and blitzed tastes exactly the same.”

The sunflower did indeed have an unexpected nuttiness to it, and the venison was delicious. Perfectly cooked eliciting more raised eyebrows from Mrs M. Another killer pairing too – a very smooth south African red called Howard John from the Laurens family vineyard in the Western Cape.

Next up was Raffo’s self-hailed signature cheese course; a Tunworth English camembert with a raisin and Muscat chutney puree and puffed rice cracker. In effect, a deconstructed cheese board. A delightfully creamy dish (hats off to Hampshire camembert I say) that was perfectly topped off with a memorable Juracon dessert wine from south-west France. Memorable for not being too sweet, a prime factor for me avoiding them like the plague in the past. 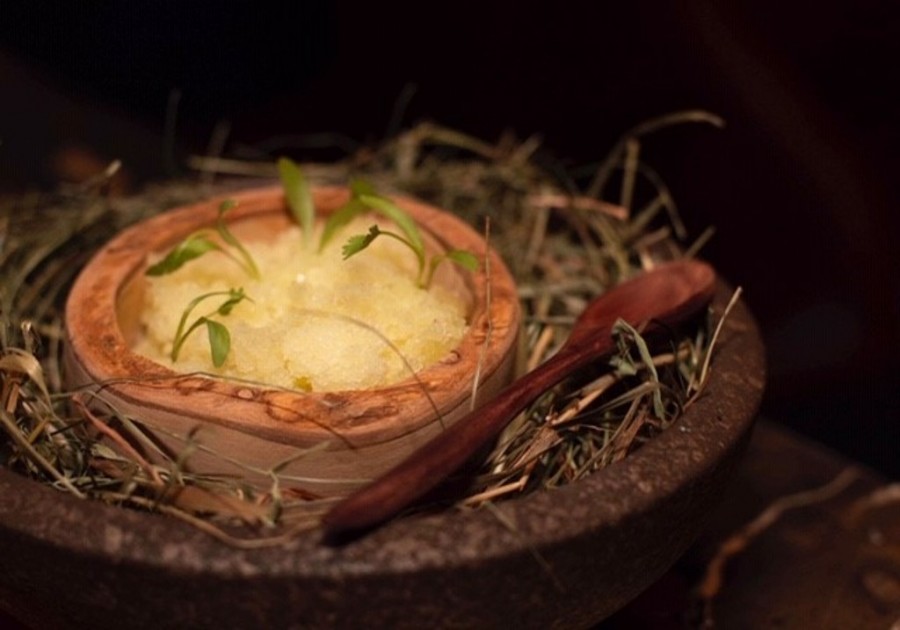 Into the home straight now and another surprising combo; parsnip parfait with smoked hay and miso. Blending parsnip with caramel was an ingenious way to bring a banana flavour to what is essentially a savoury ingredient. Salty fermented miso bean paste added another layer of taste to a highly unusual but very moreish dish that was refreshing cold and a bull’s eye for sweet-toothed patrons. A Jerez sherry pairing washed it all down very nicely too.

Unusually, a palate-cleanser was delivered for the final flourish. A last chance to taste another of Raffo’s fermented family, this time a Granny Smith frozen granita infused with foraged meadowsweet, a herb often found in damp grass and, interestingly, is mainly used to treat horse toothache! No aching teeth with this dish, just a very refreshed mouth from a granita cooled by freezing pebbles and laying them underneath. 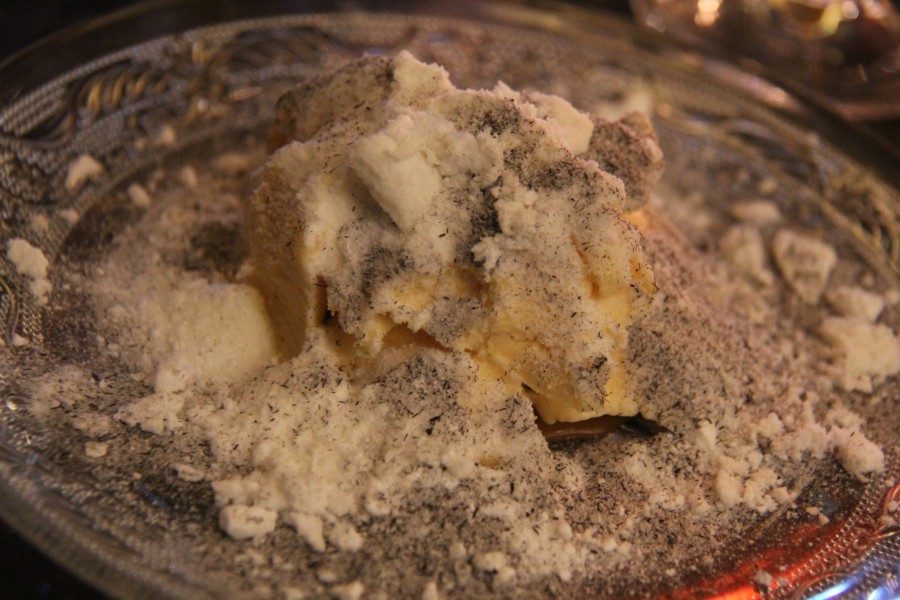 More genius thinking from a highly talented chef who clearly put a lot of thought and effort into this tasting menu.

Anglo@TRADE is a real find. A fine dining experience without having to be on your best behaviour. Just excellent food and world-class wine pairings within a club tailor-made for hospitality.

You just can’t go wrong here. And I can’t wait to go back.

UPDATE: I did go back, to review Raffo’s new tasting menu. Check it out here ANGLO@TRADE revisited.

Tell me more about Anglo@TRADE 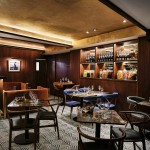 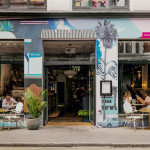 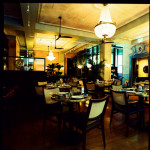