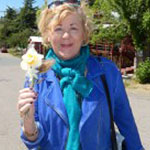 Isabel Conway has won Travel Writer of the Year Ireland awards three times. She was a category winner for long haul (2014) and Sun Holidays (2011) in the Travel Extra Travel Writer Awards January 2014. She has been a regular contributor to the Times, Daily Mail and Mail on Sunday and other national titles around the world. She has also contributed to BBC Scotland, NBC America, Radio Europe, RTE (Ireland Radio ONE and Radio Two) TV3 Ireland, TV Four the Netherlands. Isabel devotes herself now to her first love of travel and writing about her journeys around the world for newspapers, magazines and ezine titles.

View all stories by Isabel