I’m baking under a brutal midday sun watching 6,000 performers act out the story of winegrowing. It’s a two and a half hour celebration on the scale of an Olympic opening ceremony, it only takes place every twenty-five years and I’m loving every second of it.

You might say this is the ultimate test of Swiss efficiency; erecting a pop-up show arena in Vevey’s ancient market square big enough to hold 20,000 spectators, equipping it with state of the art light and sound equipment, organising a cast list of thousands, and then, making sure the whole thing all goes off without a hitch every day for three weeks. 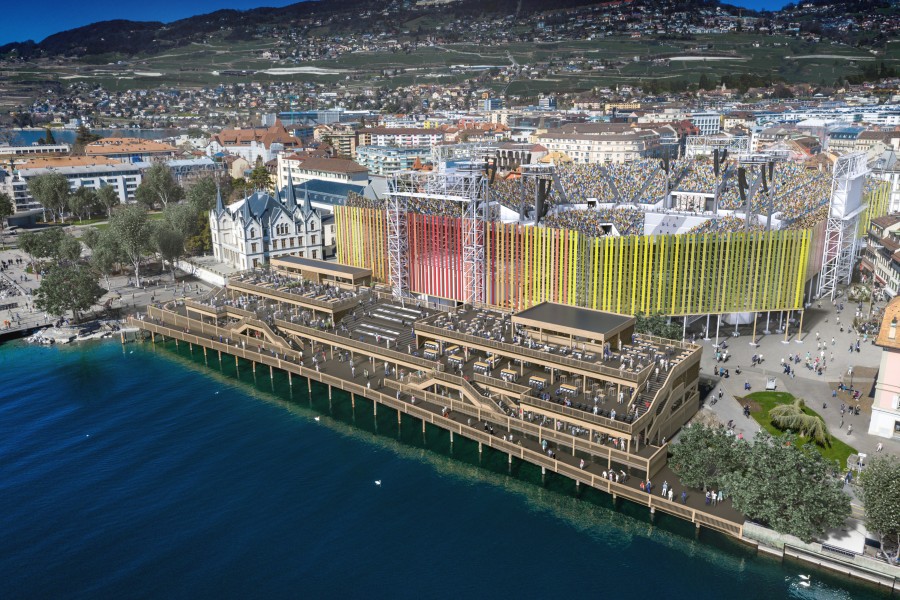 Fête des Vignerons is an extraordinary event that transforms Vevey from a beautifully quaint town of 20,000 citizens on the shore of Lake Geneva, into a three-week party town for over a million visitors. To say this is simply a celebration of winegrowing is an understatement. Winemaking in this part of Switzerland is a very serious business and the beautiful vine terracing of neighbouring Levaux has been the lifeblood of the region for centuries. Small wonder then that since 1797 the winegrowers of Levaux have praised Mother Nature for giving them the tools to create excellent wines in the only way they know how: by singing and dancing their hearts out for every new generation.

And that is just what the spectacle of Fête des Vignerons is all about; celebrating every facet of the winegrowers labours, back and forth through the seasons, a journey described through song and dance. 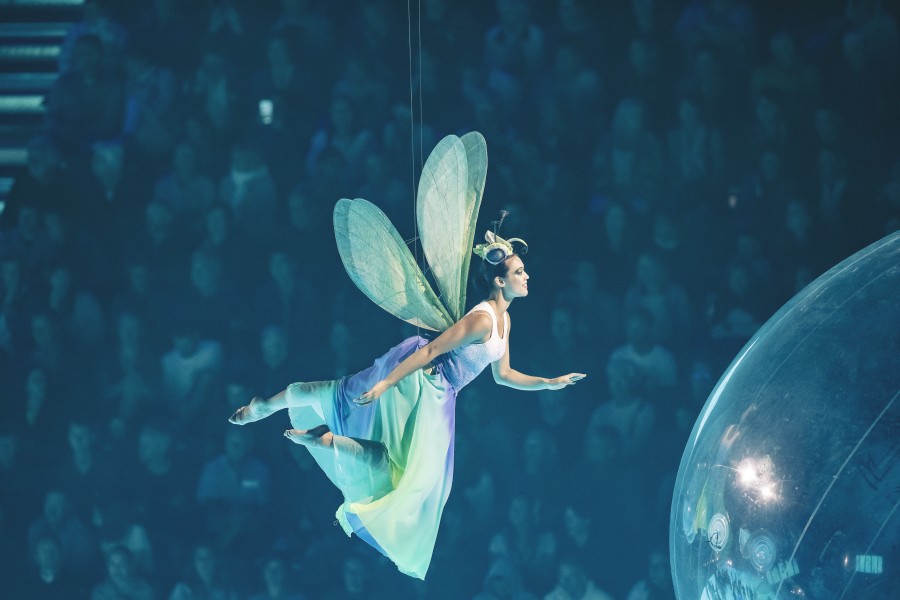 Perched high up in the centre of the stadium, I watch the show play out through the eyes of Julie, a young child who is with her grandfather watching the grape harvest when her imagination takes over and we’re with her all the way. I’m grateful for my crib sheet taking me through the scenes; from playing cards depicting the winegrowers universe – suits of sun, frost, leaf and grape, on to winter pruning, the tears of joy as spring is a fragile rebirth, then budding leaves of bloom. Along the way, we’re treated to a few joyous diversions and historical interludes. The importance of the three suns; the daystar shining directly, the sun reflecting like a mirror off Lake Geneva and then the third sun that heats the terraces long into the night. We get to learn about St. Martin’s Day, Vevey’s ancestral annual November festival where merchants get to sell their goods free of taxes. Then, of course, as it’s Switzerland there must be cows. The neighbouring milk farmers are celebrated too with a wonderful procession of prized cows and goats whose milk is transformed into world-class cheeses. 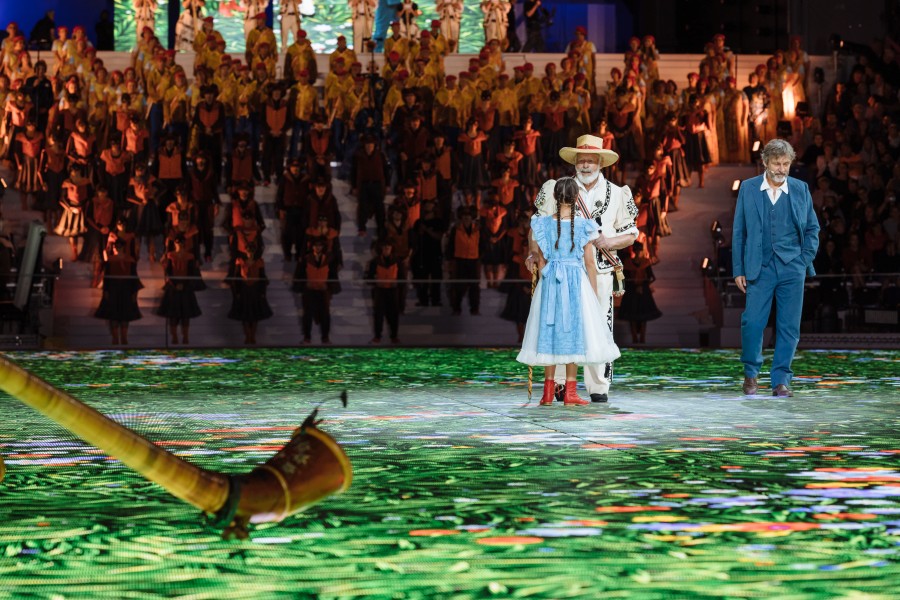 Finally, a heartfelt conclusion. With the sounds of majestic Swiss alpine horns ringing in our ears hundreds of choristers sing out from each corner of the arena; it’s the Hymn to the Earth, an ancient lament that offers thanks to Nature. It is brilliantly produced as if the voices are literally reverberating across the mountains from one hillside to the next. We all draw breath and compose ourselves for the final parade when all 34 winegrowers proudly march past. 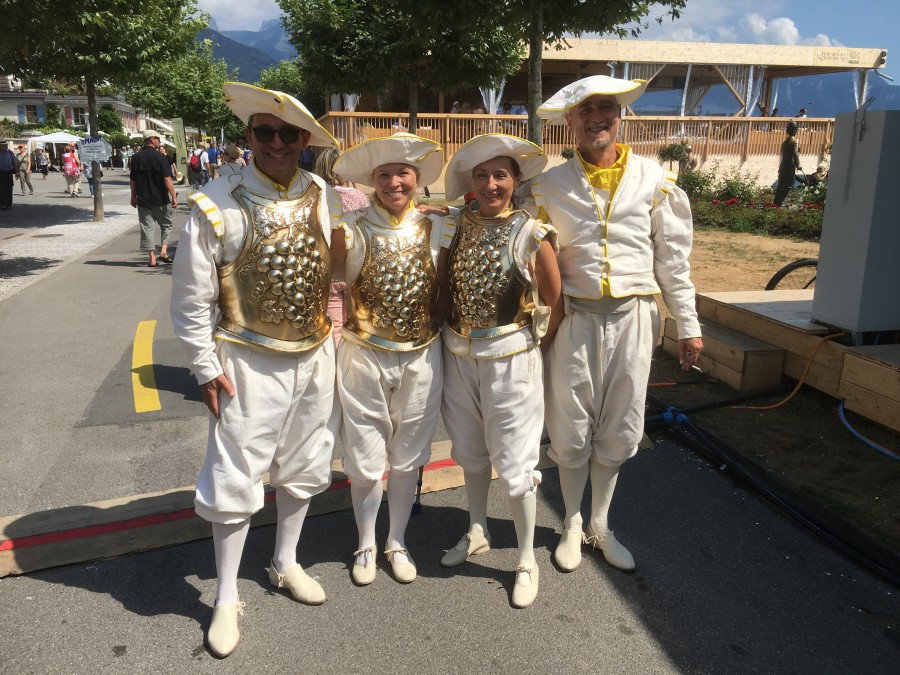 By the end I’m sitting stunned; an extraordinary spectacle wonderfully performed by 6,000 amateur volunteers. My only regret is that I watched the day performance because, I’m told, the night show is even more dramatic.

Then again, it is something to look forward to in 25 years time.

What else is there to see in the Swiss Riviera?

Perched by the banks of Lake Geneva, the neighbouring towns of Vevey and Montreux have long been welcoming visitors from all over the world. Montreux is perhaps best known for the annual Jazz Festival. It was the brainchild of Claude Nobs who founded it in 1967 when he was working for the Montreux tourist office and was looking for something to attract more visitors. It is now the second biggest music festival after Montreal and has welcomed just about every famous musician on Earth. Nobs passed away in 2013 but his legacy remains; a legendary music festival and recordings of live performances from brilliant singers and musicians saved for eternity. 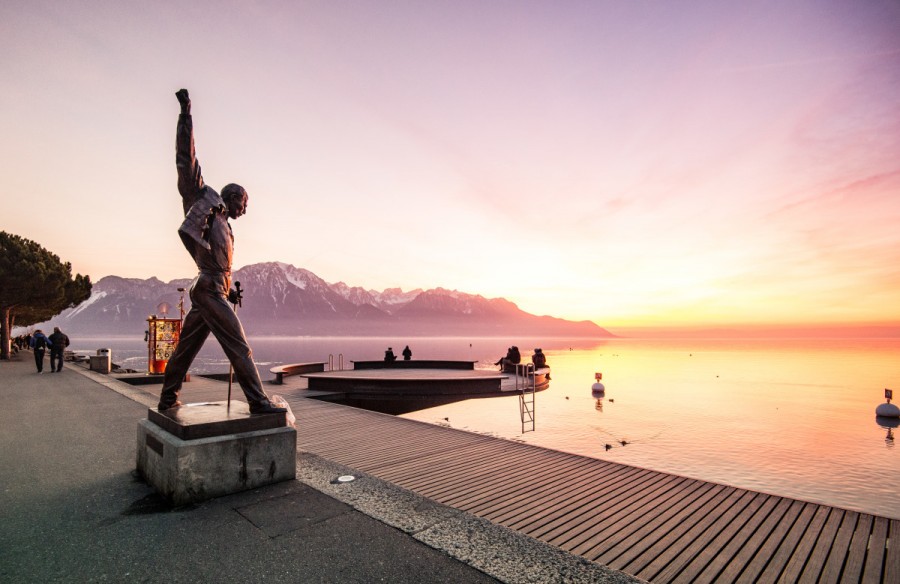 The original Montreux Casino, where the early festivals took place, was famously burnt down during a Frank Zappa concert. It provided the inspiration for Deep Purple’s Smoke on the Water as they were recording their own album on the other side of the lake. Queen recorded seven albums at the Montreux Casino studios and today there is a free Queen museum inside the new casino with original memorabilia and the original control room where you can remix famous Queen tracks.

Take a 40-minute walk around the lake to the extraordinary 10th century Chillon Castle, once an important revenue earner for the Savoie dynasty as it operated a toll for merchants who wanted to get to Germany, France and Italy. The castle is a historic gem and inspired many writers including Lord Byron, Victor Hugo, Dumas, Rousseau and Flaubert. 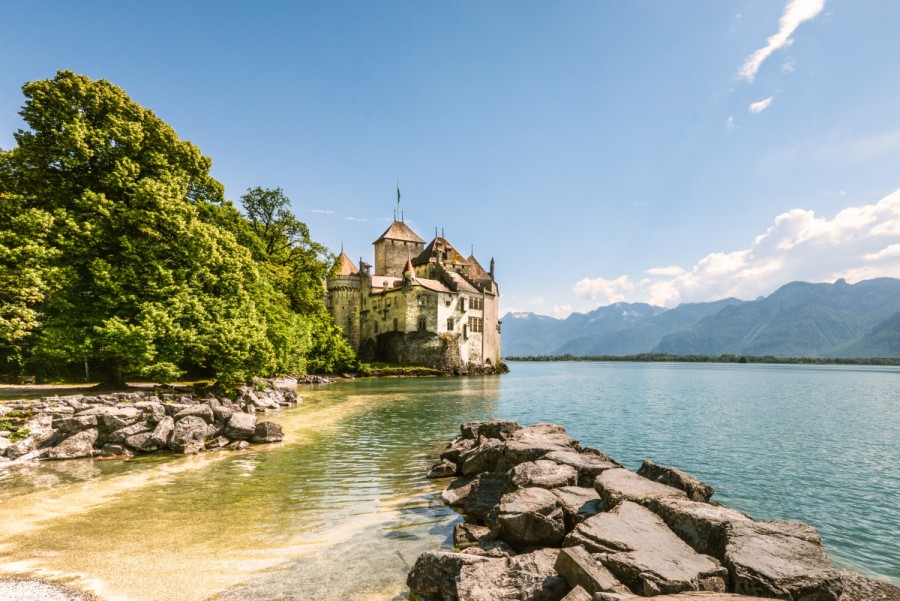 Walk in the other direction and you get to Vevey, a beautiful quiet town (when it’s not hosting the  Fête des Vignerons) and enjoy the market square and the lakeside scenery. Charlie Chaplin lived near here for the last 25 years of his life. There is a statue to the great man by the lake and, just a short bus ride away, his home has been transformed into a very impressive attraction – Chaplin’s World. The house is full of Chaplin’s original furniture and some of his studio sets have been reproduced from his original drawings donated by the family. 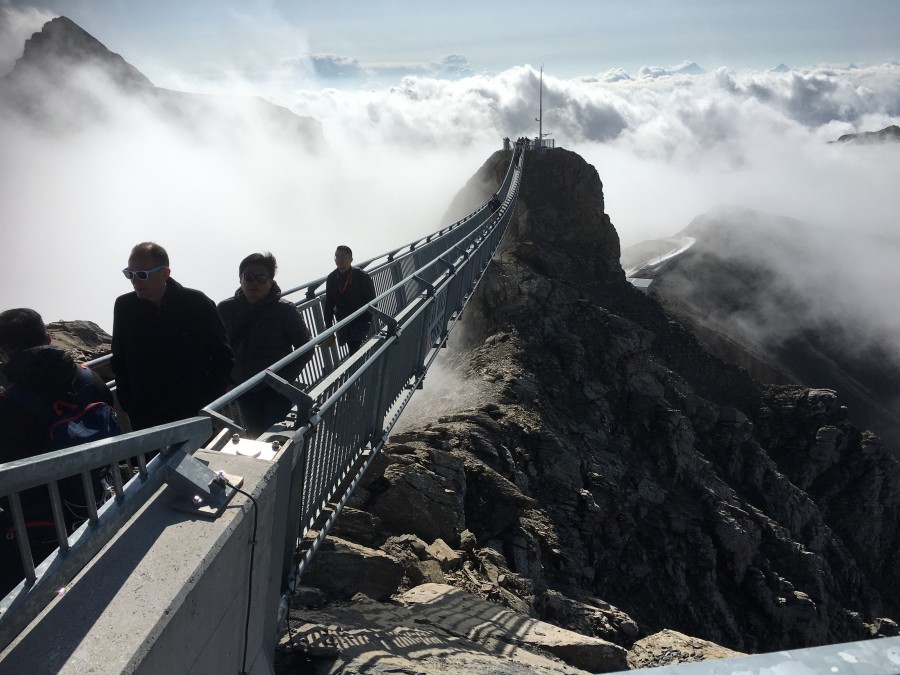 For an exciting day trip take the Golden Pass Panoramic train from Montreux up through the hills to the famously well-heeled Gstaad. From there you can take a bus up to Glacier 3000 a truly spectacular alpine experience 3,000 metres up the Pillon Pass. Take the Peak Walk by Tissot across a 107-metre long and 80-centimetre wide footbridge strung between two mountain peaks. There’s a thrilling Alpine coaster, the highest toboggan run in the world, a glacier walk, a snow bus tour and dog sledges.

Click here for more information about the Fête des Vignerons

You can purchase tickets for the Golden Pass Panoramic Train here. 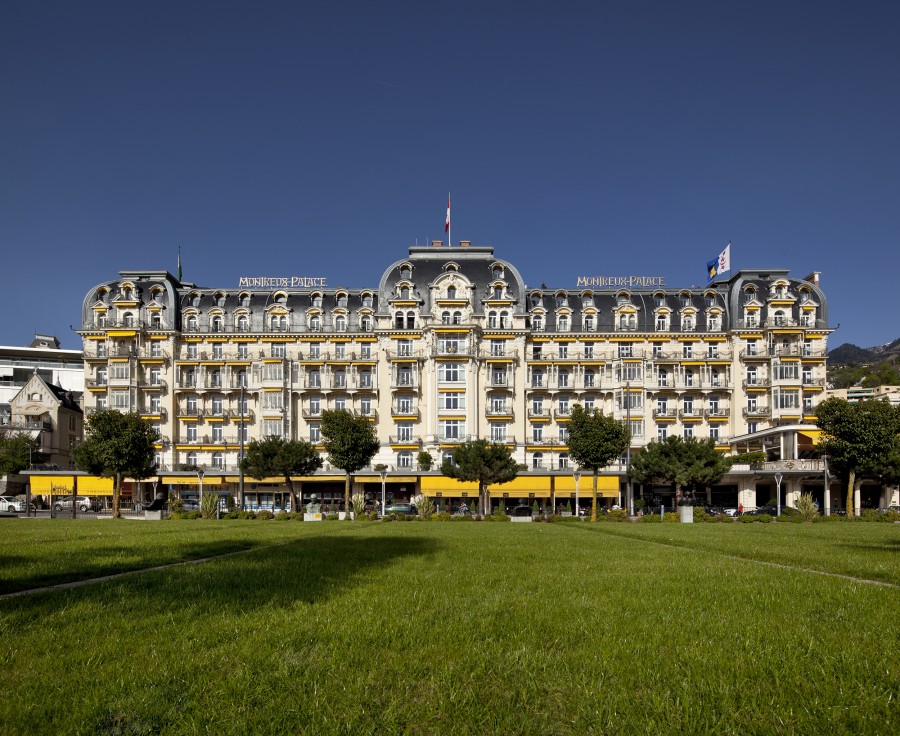 Fairmont Le Montreux Palace is without a doubt one of the most glamorous hotels in the world. It has been the grande dame of the Swiss Riviera since 1906 and has had more famous names stay there than you have hairs on your head. Legends abound around this famous place which is the centrepiece host of the Jazz Festival every year. Each of its 236 rooms and suites is sumptuously elegant, the lakeside views across to Evian’s mountains are memorable and the service impeccable. Browse the photos in the Jazz Cafe next door or pop over the road and lunch on the lakeside terrace.