“Architects may come and architects may go and never change your point of view,” sang Art Garfunkel about his hero, Frank Lloyd Wright.   But you could never accuse the 20th century starchitect of not making a difference; Wright changed everything about the way we live, the father of open plan design and homes which blur the boundaries between inside and the great outdoors.
Now the state of Wisconsin, where Wright was born, established his dream home and designed some of his most iconic buildings, has established an official Frank Lloyd Wright trail on the 150th anniversary of his birth.  It encompasses homes, schools and perhaps the most splendid corporate HQ ever built, for wax tycoon SC Johnson.  There’s also the spaceship of a  conference centre in the state capital which took 60 years to get built, thanks to resistance of the city’s great and good to the louche lifestyle of their adulterous and often impecunious native son.

The SC Johnson offices are in Racine, a good place to start given its proximity to Chicago, the closest arrival point for direct flights from the UK.   With its romantic harbour front and tiny town centre boasting a world-class art and craft museum, Racine is the last place you’d expect any kind of corporate HQ, but the Johnson empire remains a major  employer, and  it campus is not to be missed. Still considered one of the top 25 buildings in the USA, the 1939 office building is underpinned by a breathtakingly spacious Great Workroom half an acre wide supported by triffid-like columns rising like trees.  The research tower next door is wrapped in miles of Pyrex tubing to refract light into the laboratories, well worth climbing a spiral staircase to marvel at.  Don’t miss the futuristic Fortaleza Hall on the grounds, built by Britain’s own Norman Foster, and paying tribute to Wright’s principles with its curves, soaring spaces and suffusion of natural daylight feeding a spectacular living wall. 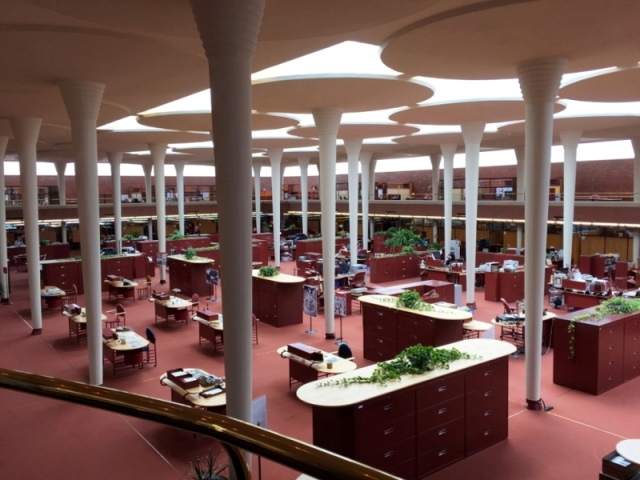 Although Wingspread, the home built for Johnson, is less engaging, there are some beautiful Wright homes in Racine’s elegant downtown residential district, which like the art museum demands a visit before leaving town.   The DoubleTree Hilton integral to a charming harbour front redevelopment is the obvious place to stay, and the nearby Yardarm Bar & Grill is a buzzy gastropub serving the Wisconsin fish fry which is one of the state’s gastronomic specialities.   Another is proper Danish pastry,  thanks to the many bakers who emigrated to Wisconsin from Scandinavia; check out the O&H bakery at breakfast time.

Madison, the state capital, is a jumping-off point for Taliesin, some 40 miles further west, a spectacular house which demands a full half-day visit. Wright built it in 1911 on a favourite hillside for himself and his mistress, Mamah Borthwick; disapproval of their affair is thought by some to have provoked the arson attack by a disgruntled former employee which burned the house down three years later, killing Mamah.  Rebuilt after this and a second fire in 1925, the complex also contains a studio and an architecture school which flourishes today.   There’s as much to see outside as in; Wright’s farm buildings, the eccentric Romeo and Juliet windmill on the site of the school Wright built for his teacher aunts at the age of 20, and the glorious gardens framed by Taliesin’s fantastically flowing architecture. 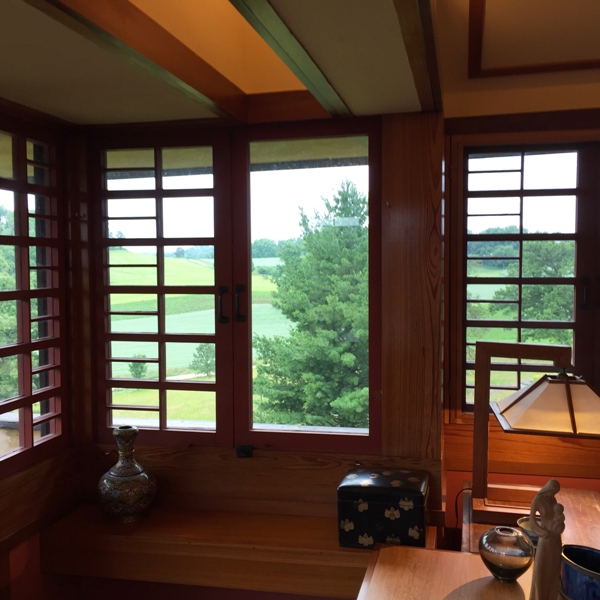 By comparison, the Wyoming Valley School at the bottom of the hill was built on a shoestring,; Wright dug into his own pocket to complete it in 1957 in memory of his mother.  Simple but futuristic, it’s worth a look before leaving Spring Green, an attractive hilly rural area home to a clutch of galleries and potteries.

Madison demands an overnight stay, not only to enjoy the wonderful Capitol building and eclectic restaurants in the streets surrounding it, but  the Monona Terrace civic centre, first designed by Wright in 1938 but not completed till 1997.   As with most of the architect’s  projects, he ignored budgets and his first designs were unaffordable.  Modified plans were not helped by local disapproval of Wright’s lifestyle which persisted until his death in 1959.   But the centre did finally get built, a series of iconic hemispheres bordering one of the two lakes between which this attractive student city is perched. 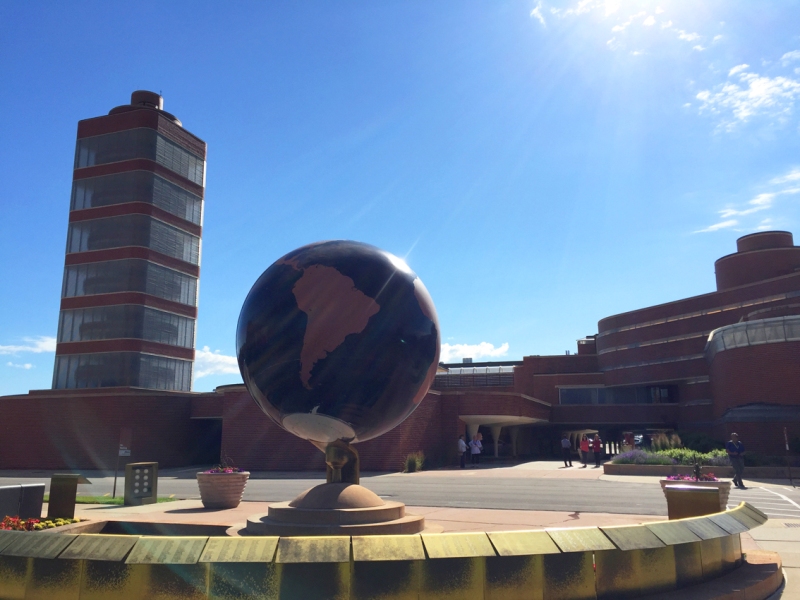 The third point on the essential Frank Lloyd Wright triangle is Milwaukee, Wisconsin’s biggest city.   It has a world-class art museum which would have blown the architect away and  some of his greatest hidden gems in the six Burnham Street homes built as affordable housing in a blue-collar neighbourhood.  Even though only one is open to the public, and then only on selected weekends,  Milwaukee, like Racine and Madison, demands an overnight stay.  A vibrant university town, it has a wonderfully idiosyncratic hotel in the Iron Horse, perhaps the only biker-friendly boutique hotel in the world, thanks to its proximity to Milwaukee’s Harley-Davidson Museum.   Wright lived through the Harley’s rise to prominence, and had he sill been alive when the museum was conceived, it might well have been the final commission which came his way

Tell me more about the Frank Lloyd Wright trail

United Airlines serves Chicago from London with onward flights to Milwaukee, from where Racine is a slightly shorter 40-minute drive. 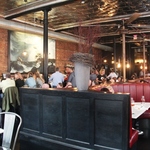 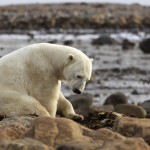