Admittedly I am driving a classic Morgan, but in my head it is an Aston Martin. Nevertheless I am hurtling down the twisty Oberalp Pass towards Andermatt, with the top down enjoying the hot summer sun and feeling distinctly like a secret agent. Actually I’m lying about the hurtling bit, you never hurtle in a Morgan, you just glide and make sure everyone can see you.

The Furka Pass is better known these days as James Bond Strasse because this was where the famous chase scene in Goldfinger was shot; where Bond shredded the tyres of Tilly Masterson’s white Ford Mustang using blades sticking out of the wheels of his DBS. I pull over by the James Bond Strasse signpost (there is even a still of the scene here too for clarification, god bless Swiss efficiency) and like Sean Connery look down at the bend where Goldfinger was standing. A bead of sweat trickles down my back as I swear I feel Tilly’s rifle sights on it. A passing campervan ruins the moment, but still, at least I was Bond for that moment. 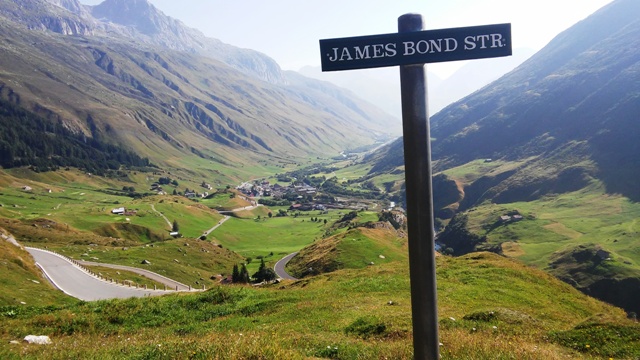 This is a pilgrimage site for Bond fans, as is the Aurora gas station in Andermatt where Bond left Tilly after rescuing her from her wrecked Mustang. Today sadly, the pumps have gone, but at least the facade remains for posterity. 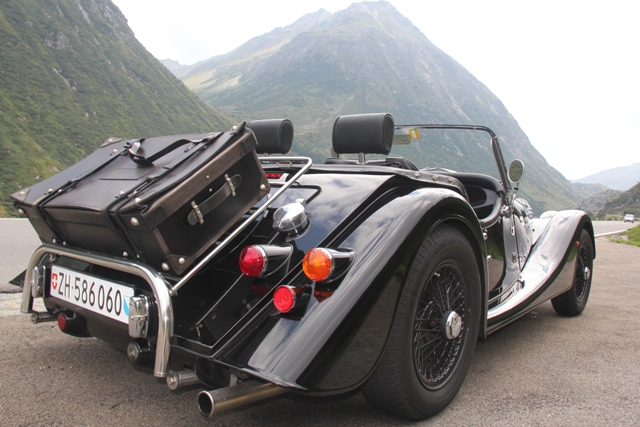 Speaking of posterity, Andermatt is enjoying quite the opposite these days; phoenix like, the town is re-emerging into the classy resort status it once enjoyed, when it was right up there with the likes of St. Moritz, Verbier and Gstaad. Even Queen Victoria was a frequent visitor here. Andermatt’s position at the junction of four of Switzerland’s most famous passes, not to mention its proximity to the almost mythical Devil’s Bridge ensured its legendary status at the crossroads of Europe. With the St.Gotthard, Furka, Oberalp and Susten passes on its doorstep, it has always been strategically vital to Switzerland, but two world wars and occupation by the Swiss Army for decades put paid to its tourism. The army’s drastic scale back in 1999, was the cue for Egyptian real estate and leisure billionaire Samih Sawiris to reignite Andermatt’s potential and the rest as they say, is history. Andermatt’s historic centre with her quaint rustically alpine buildings remain, but in the space where the classic Grand Bellevue Palace once welcomed Europe’s elite, The Chedi now stands, a gleaming five star hotel of jaw dropping quality. And a stone’s throw away, where  army manoeuvres once took place, a development of luxury apartments and hotels slowly rises, the surrounding peaks offering up a majestic backdrop.

But there is more. To truly put Andermatt back on the map, Sawiris has invested further in constructing a championship 18 hole golf course and upgrading and extending Andermatt’s winter skiing runs. This is world class in the making.

It is just a two hour drive to Milan and 90 minutes to Zurich, yet here, I feel I am firmly in God’s country, surrounded by epic mountains zillions of years old. Remote. Natural. Untouched. It’s a rare felling in this modern era.

I drive slowly through the village, the Morgan raising a few eyebrows as I glide by,  Andermatt’s narrow streets lined with local restaurants and cafes. A mental picture pops up of owners rubbing their hands with glee at the prospect of tourists replacing their once exclusive military custom. That said, they’ve had to up their game considerably too after all, discerning visitors will expect more than just a plate or two of rosti and raclette. I take the car up through the famous St. Gotthard Pass, just a ten minute drive away, passing by the imposing Schollenen Gorge where the infamous Devil’s Bridge has been a crossing for travellers since 1200. I turn off the main road and discover the delights of the Tremola, the old paved route winding around the mountain, the sharp bends almost Amalfi-like. For a while, I take a step back in time as I pull behind the five horse drawn carriage which still ferries passengers across the mountain every day on the old route. These days it’s just a half day jaunt with lunch thrown in for anyone who wants to relive the way 65,000 posh people each summer used to get to Andermatt in the 19th century. I drop the Morgan back at The Chedi, relieved there’s not a dent or scratch in sight and head off to two more iconic destinations right on Andermatt’s doorstep; the sources of the Rhine and Rhône rivers. The Rhône is a short drive, where for a few francs you can take a stroll inside the ancient blue-hued glacier where the Rhône begins as a tricking stream. A family is sitting and gazing out across the valley as the stream gathers momentum further down. I feel a little teary here. Truthfully. Just standing here, I feel so insignificant in the presence of this ancient glacier, still moving 10 centimeters a day. The Rhine source is a little trickier. It involves a hike and naturally that means effort. I’m with Marja who is guiding me and we drive a half hour along the Oberalp and park by the highest lighthouse in the world at over 2,000 metres. It is a replica of the one at the Hook of Holland close to where the Rhine exits to the North Sea at Rotterdam.

It’s a 90 minute hike up to the small hidden lake they call Tomasee although experienced walkers can take a more arduous route taking over 3 hours. “There’s gold in these mountains” Marja whispers and suddenly I’m a lot more interested in the geology around me. As we near the top Marja breaks into song. Clearly, the source of the Rhine is a little bit special for her. We round a particularly tricky rock face and we’re at the lake, a beautiful expanse of pure mountain water embraced on all sides by a cathedral of granite. Sitting at the water’s edge it’s all too much for Marja who plants both feet in and performs some yoga/tai chi to embrace the energy of the mountain. There is no doubting, this is a spiritual place.

“They put a rubber duck in up here and traced it all the way to Rotterdam” Marja tells me. “it took 31 days.”

We walk to where the stream flows out of the lake and someone has planted some rocks to make a bridge.

Marja stands on it singing the Sound of Music. “it’s the first bridge over the Rhine, so it’s special”  she says. I think it’s pretty special too and she takes a picture of me on it. I don’t break into song, but I’m beginning to feel the energy. I’ll need lots of it for the walk back down.

My final visit in Andermatt is to the Sasso San Gottardo, a hugely romantic sounding name, but in reality, a hidden network of (at one time top secret) Swiss army artillery fortifications buried deep inside the Gotthard massif built to defend Switzerland from attack. Operational from 1943 right up to 1999, and completely self sufficient,  this is a truly unique experience for me, exploring this huge tunnel network stretching thousands of metres, with its underground funicular (the Metro del Sasso) and hidden gun batteries. There is however one romantic spot within this dark and foreboding place, a whole cavern dedicated to the stunning collection of gigantic crystals found near here, the biggest examples ever found in the Alpine region.

From James Bond to crystal treasures, it seems I’ve come a full circle on my tour of Andermatt. As I catch the train for my journey back to Zurich I can’t help but feel this  latest chapter in Andermatt’s long history is the turning point. The point when the vision and deep pockets of Samih Sawiris reignites Andermatt’s potential as a world class resort once more.

I for one can’t wait to come back.

I want to visit Andermatt. Where can I find out more?

The Morgan Andy drove is available for daily rent for guests of The Chedi Andermatt.

By road, rail and waterway throughout Switzerland: The Swiss Travel System provides a dedicated range of travel passes and tickets exclusively for visitors from abroad. The Swiss Transfer Ticket covers a round-trip between the airport/Swiss border and your destination.Prices are £104 in second class and £167 in first class.

SWISS operates up to 200 weekly flights to Switzerland from London Heathrow, London City, London Gatwick (seasonal during winter), Manchester, Birmingham and Dublin from as little as £38 one-way* (Geneva Economy Light Fare only includes hand luggage). The all-inclusive fares start from £63 one-way*, including all airport taxes.

Nightly rates at The Chedi are from CF 525 depending on season. The Chedi Andermatt also offers a unique scenic Swiss train experience package: The the famous ‘Glacier Express’  travelling from Andermatt to St. Moritz. 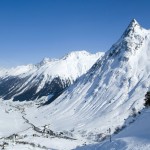