It’s no coincidence that Wes Anderson, director of The Grand Budapest Hotel, visited the Corinthia Hotel in Hungary’s capital before making his movie.   It may not have been set in the city or even the country, but there are remarkable similarities between the hotel which stars in the movie and the five-star establishment considered Budapest’s finest.

When the Corinthia opened in 1896 as the Grand Royal, it was Europe’s largest luxury hotel and considered incredibly innovative for the times with more than 100 of its rooms ensuite.    And a decision to install the world’s first cinema just months after the Lumiere brothers had shown the world the very first moving pictures was considered positively radical.

The cinema, which operated for years, well into the Communist Era, is long gone, but its housing, an ornately gilded ballroom, remains.   As do all those elements which will be familiar to those who have seen the Grand Budapest Hotel movie – the E-shaped facade,  the tiered staircases which rise up symmetrically from the lobby, the arcaded Moroccan-style spa in the basement. 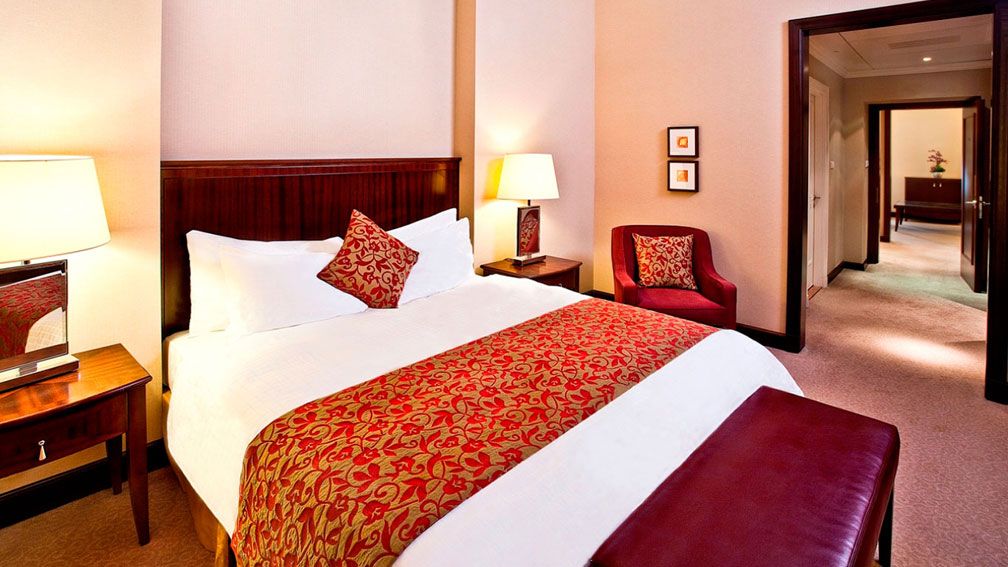 Although the Grand Royal Hotel was a fixture in Budapest for a century, it was closed for years, and a certain amount of glitz was lost in the conversion to a modern grand hotel of the corporate kind by the Corinthia group.   Rooms could have more character, and the ones which have the most face an inner courtyard so can be a tad lacking in natural light during the day.   Rooms facing the boulevard are light and bright, but could use a sofa; all have the same well-equipped marble bathrooms. 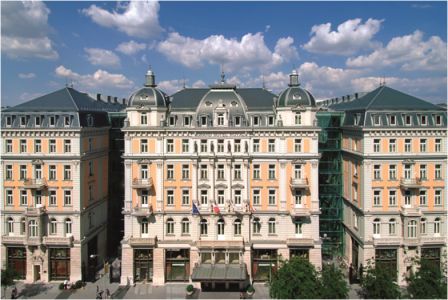 Breakfast in the Atrium restaurant is bountiful, and the standard of food is pretty good, particularly in the Rickshaw pan-Asian restaurant which caters to guests aching for a taste of fine Chinese, Thai and Japanese fare in a city heavy on goulash, paprikash and pastries.  Talking of pastries, the city’s best are probably those made in the hotel’s Cafe Royal, even if the room is disappointingly plain.   The Bock Bistro on the other side of the property is a concession owned by Hungary’s top winery, and tables there are said to be the hardest to obtain in town – even with the help of the impeccable concierges.

Although the Corinthia does not enjoy a landmark location – it is neither on the main drag, Andrassy Avenue, or the shores of the Danube, trams run past the door and the Oktagon metro stop, on the junction with Andrassy, is just a five-minute walk away.   Movie buffs should ask the concierge to book them in with a  walking tour of the city’s many movie locations.  The hotel may not be among them, but Jeremy Irons stayed here while filming The Borgias in Budapest, and legendary jazz singer Josephine Baker was in the house 80 years before him. 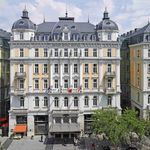 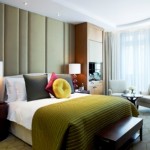 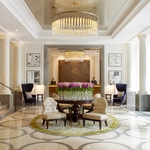