A starry night as black as pitch surrounded us as our headlights probed the empty landscape on our way south past Cley Marshes and I realised once more why this place is so rare amid the hurly-burly of modern England.

Not a light, not a sound, not even a soul could be seen or heard anywhere for the next couple of miles, as we headed toward Cromer with a sense of solitude and stillness that dated from a distant age.

It is that unspoilt timelessness of so much of Norfolk which burns its way into the hearts of visitors and fills locals with such fierce pride about their birthplace.

Nowhere is that better illustrated than in the words of England’s great hero Nelson – born nearby at pretty little Burnham Thorpe – when he returned from his great victory at the Battle of the Nile and declared: ‘I am myself a Norfolk man and glory in being so.’ 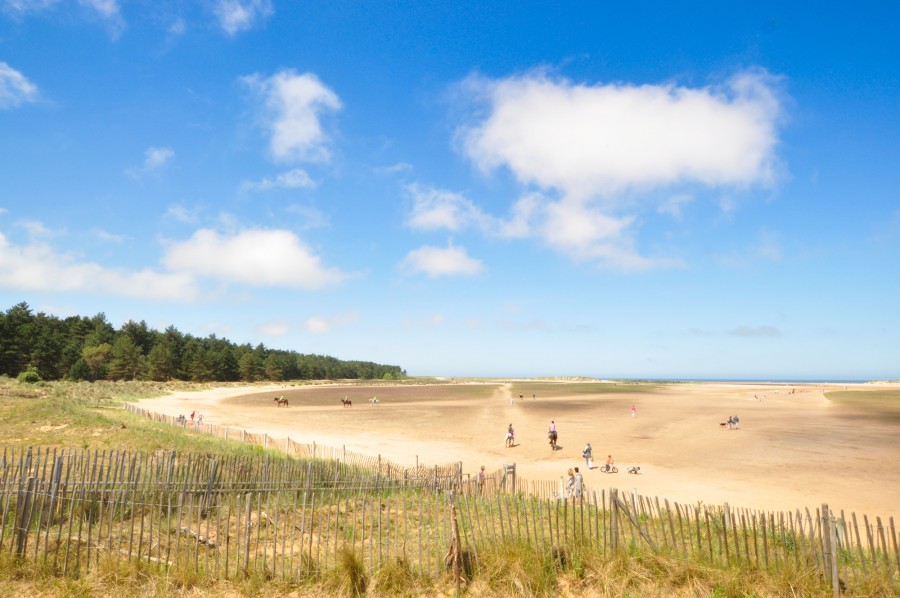 Much has changed, but much remains the same as it was over 100 years ago when sailor and angler George Christopher Davis wrote: ‘Often times within the circle of your sight there is neither house nor man visible. A grey church tower, a windmill, or the dark-brown sail of a wherry in the distance breaks the sense of utter loneliness, but the scene is wild enough to enchain the imagination of many.’

My own imagination was immediately ‘enchained’ by the county when I arrived there as a young journalist in the 1980s, advised to go by my then journalism mentor Tom Taylor (whose son Graham would go on to manage the England football team). “You’ll get great training lad,” he advised, “before you go off to London.”

But London never happened. There was too much beauty and pleasure on the doorstep as I learned to sail the rivers and the tranquil Broads, to wander the wilds of the Brecklands and to enjoy the friendliness of villages where house doors are still left open all day. 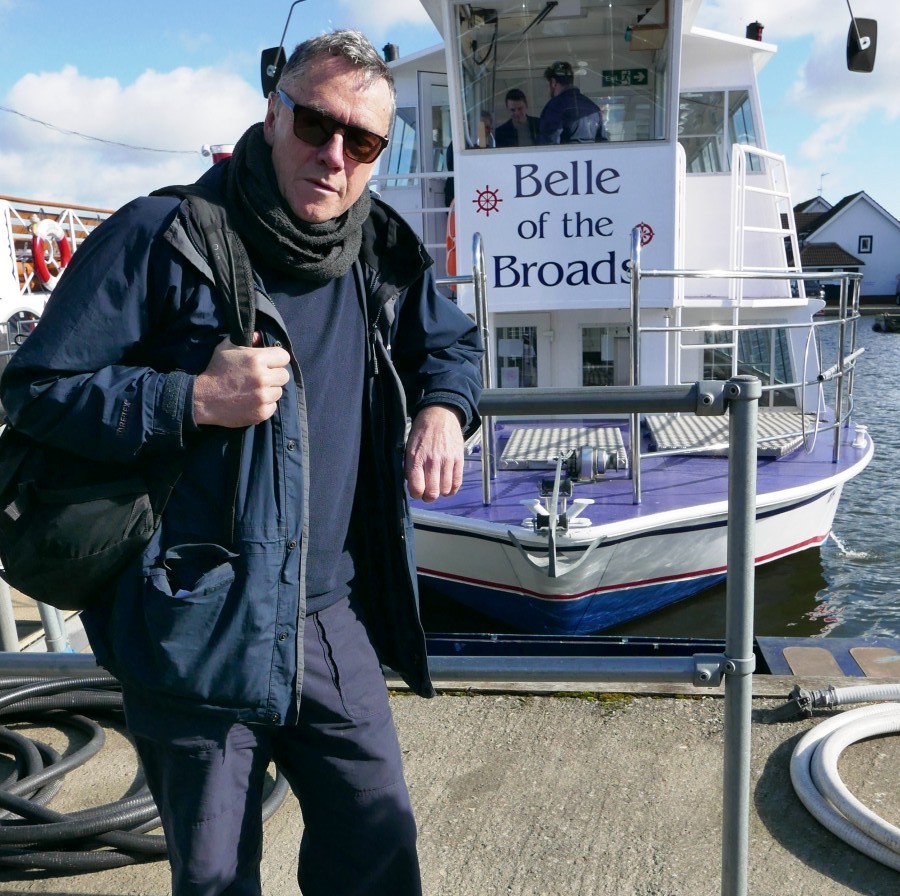 So, after work wrenched me away a decade ago, it was a real adventure to return for a week and view, through older eyes, a place I had long ago learned to love like no other.

With my partner and photographer Sue Mountjoy (Nottingham born and bred with just a little past Norfolk experience) we opted to base ourselves in the vibrant heart of the county, the city of Norwich itself, and explore hidden sights as well as some surprises in the area.

Our journey was to be in a clockwise circle starting in North Norfolk, swinging round to Ludham with the Broads and into Norwich itself before venturing into ‘enemy territory’ just across the Suffolk border to the lovely little ‘left-behind’ resort of Kessingland. 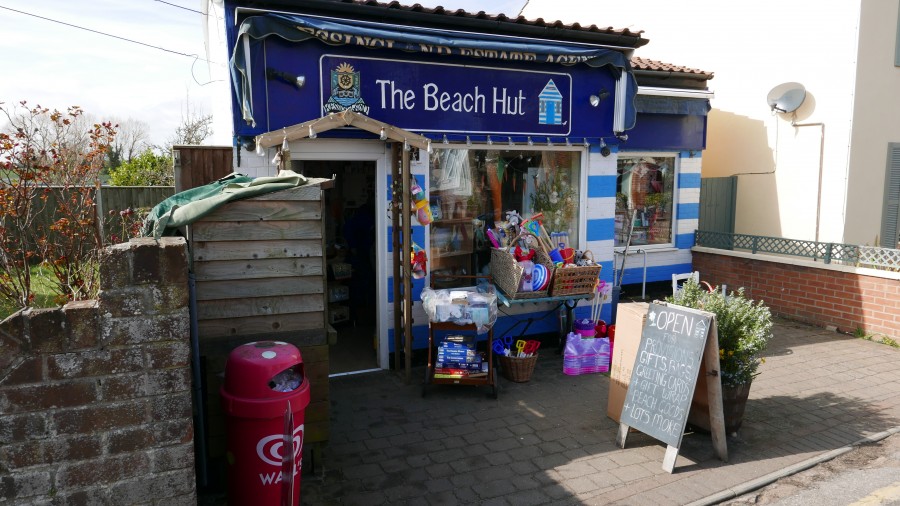 On our first morning, we headed to North Norfolk to what many describe as ‘Chelsea-on-Sea’ due to the influx of well-heeled Londoners and other second-homers. Our first stop was at lovely Holt to follow in the footsteps of Prince Charles and Camilla and to check out the renowned antique and charity shops for any goodies – I found a Timberland jacket for £6! Then came Sheringham steam railway, which provides a great view of the coast, then on to Cromer, with its gentile promenade and quaint seafront.

Next morning brought one of those wide blue skies so beloved of Cotman, Chrome and the rest of the nineteenth century Norwich School of Painters (catch their work at the city’s Castle Museum) and we headed south to Wroxham for one of those guided boat tours on the Belle of the Broads (a first for me).

Despite my many years’ sailing dinghies and small yachts along these waters, I had never become one of the eight million tourists who swarm in each year. As a result, I had never before seen ukulele star George Formby’s old house nor did I know that the great crested grebes who glided past us had almost become extinct 125 years ago, as they were killed for their exquisite head feathers to be used to decorate hats. Fancy that – as Formby might have said. 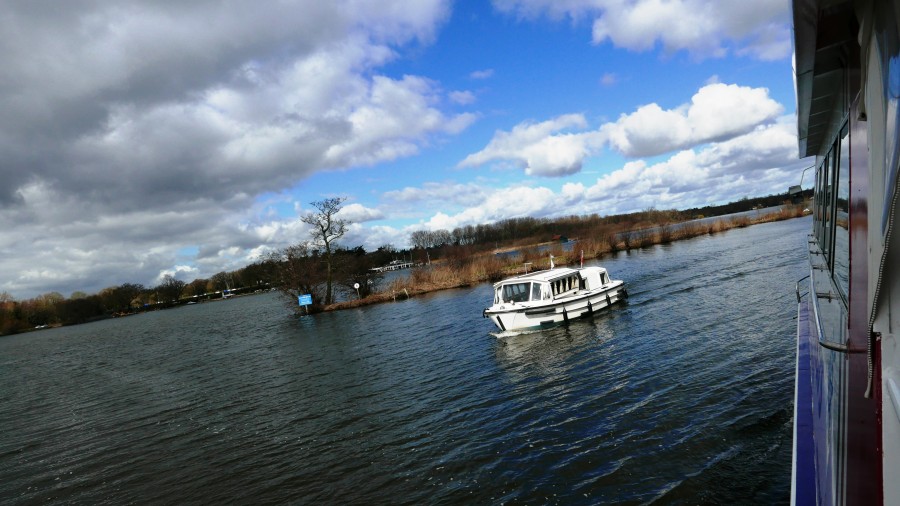 One of our fellow tourists was an eight-year-old girl, celebrating a birthday treat with her dad. Her hobby was bird-watching and Sue loaned her our binoculars which to her delight opened up the passing world of buzzards, marsh harriers, tufted ducks, robins, bluetits but, sadly, none of the kingfishers who swarm like aquamarine darts around a corner of the River Bure during the sunnier months on the Belle’s way home.

A trip to the Broads is hardly complete without visiting a local pub and the Kings Arms, a short walk from our Ludham campsite, was bustling that evening. A live band was playing jigs and reels in memory of a recently deceased Irish regular, Pat Pooley, who had been a regular visitor for 40 years, along with her husband and their dog Murphy. With Guinness flowing and Irish stew topping the menu, we could have been in Lisdoonvarna instead of Ludham.

At the beating heart of Norfolk is Norwich, accurately described ‘a fine city’ by local writer George Borrow (although he may well have pinched the term from fellow author William Cobbett). With its countless ancient buildings, museums, independent shops and pubs and restaurants, its relatively compact centre has as much to offer as York or Bath. 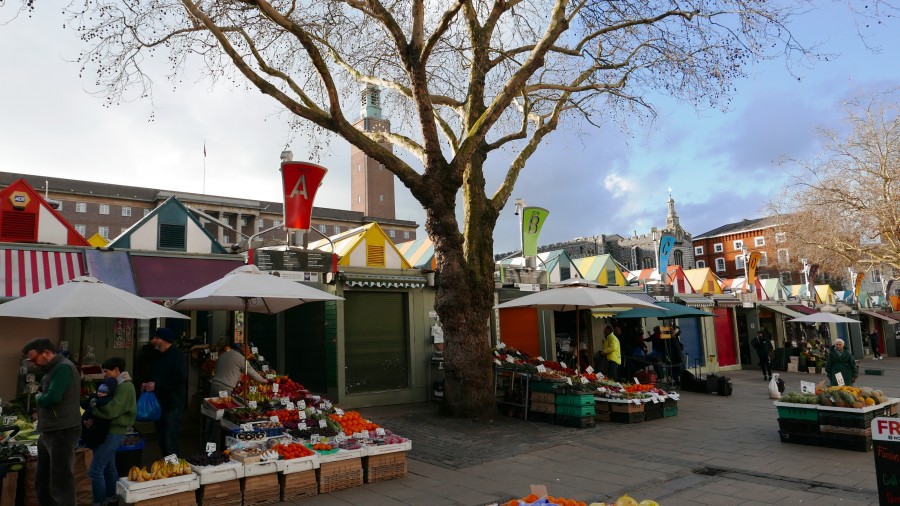 For Sue and I the city brought another couple of ‘firsts’ – a tour of the colourful market led by an old friend and expert guide, Paul Dickson who taught me far more than I had ever known about a market that is as alive today as when the conquering French moved it to the centre of the city in 1070.

It was easy to see why it won the British Open Air Market of the Year in the latest national awards, with so many stalls offering food and drink from across the world as well as quirky clothes, second-hand books, household vitals, flowers and the ubiquitous fruit and veg.

Among the tastings which are part of Paul’s tours, we sampled very lively Kenyan Special Tipping tea from real flowered china cups and saucers at Benchley’s Loose Tea Stall. 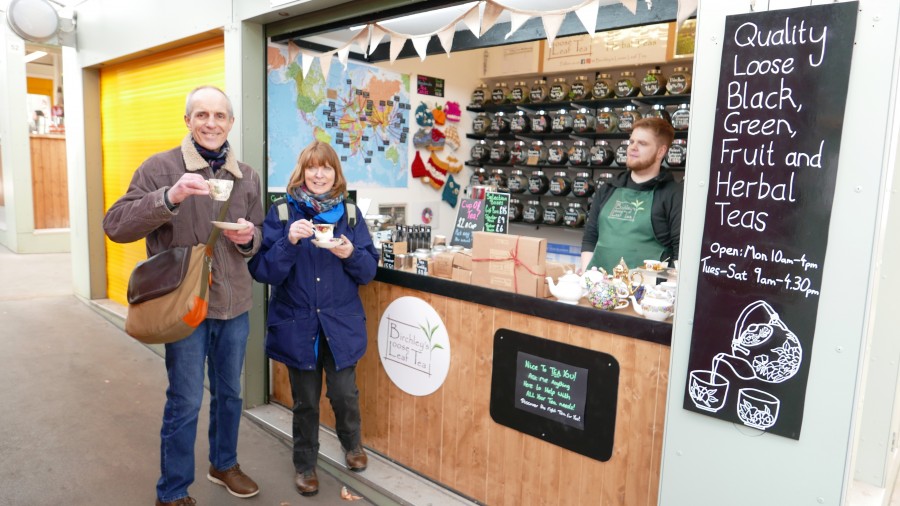 Later, Sue and I couldn’t resist calling at another stall for a delightful Punjabi veg curry with pilau rice for a takeaway lunch which we ate on the steps of the nearby Forum, one of the best-combined libraries and meeting centres in England (the soulless original building was destroyed by fire caused by an electrical fault).

With so much to see and do, Norwich is a magnet for the whole of East Anglia, which is why its shopping is also some of the best in Britain, with two malls and several busy streets, boasting a wide variety of thriving independents, headed by Jarrold’s, the core family department store that gives John Lewis a run for its money.

Over two full days, Sue and I burnt shoe leather extensively touring the Castle Museum for those Norwich School paintings as well as a Viking exhibition of rare jewellery and artefacts that explain some of the period’s myths, the city’s self-guided Tudor Tour of largely hidden buildings and glorious Evensong at the Norman Cathedral (I once climbed its 315-foot spire for a newspaper feature!). 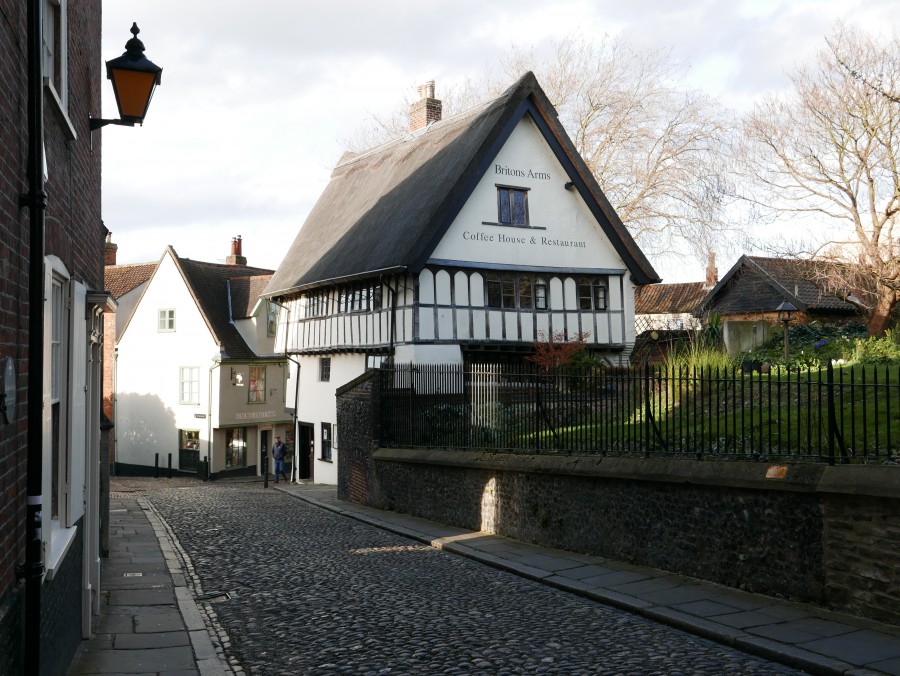 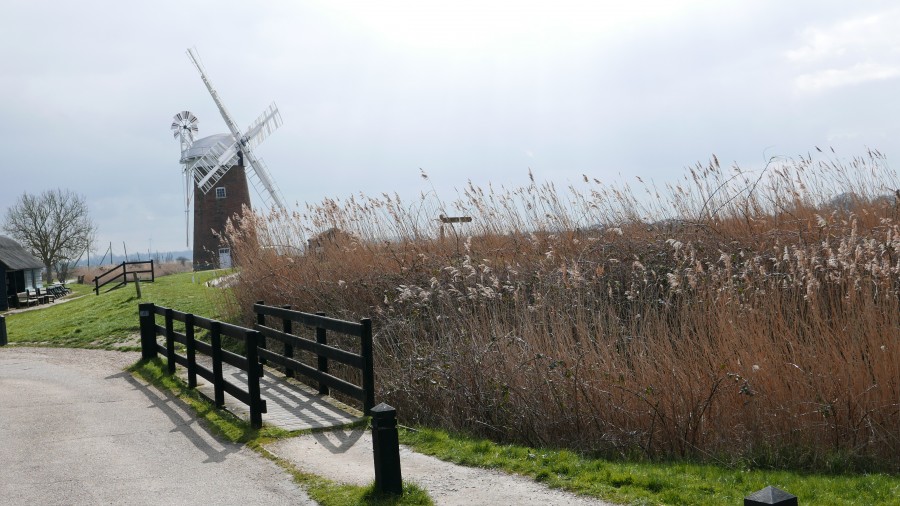 Food was heavily on our menu, though, on the second day when we performed another first by lunching at the Britons Arms Coffee House and Restaurant, a wonderful Grade 11 thatched and timber-framed place which stands resplendently on a corner of cobbled Elm Hill. It is now thought by English Heritage to date from 1347 and is Norwich’s only survivor of the Great Fire which consumed the city centre in 1507.

Talking of consuming, the food created freshly each day by delightful sisters Sue Skipper and Gilly Mixer for over 35 years left Sue and me well and truly satisfied and included a huge portion of their special chicken, salsify and smoked bacon pie and locally smoked haddock and spinach in filo with the crispiest of salads, followed by rhubarb, ginger and ricotta crumble and raspberry and hazelnut roulade.

A wander along St Benedict’s bohemian shopping area helped to burn off a few calories before the evening’s already-booked supper, at the Grosvenor Fish Bar, a ‘chippy’ like no other, where you can eat in the 1940’s bomb shelter-style Crypt, with appropriate jazz playing, and choose anything from battered smoked herring to a crispy sea bass fillet in a wrap with lettuce and mango salsa. 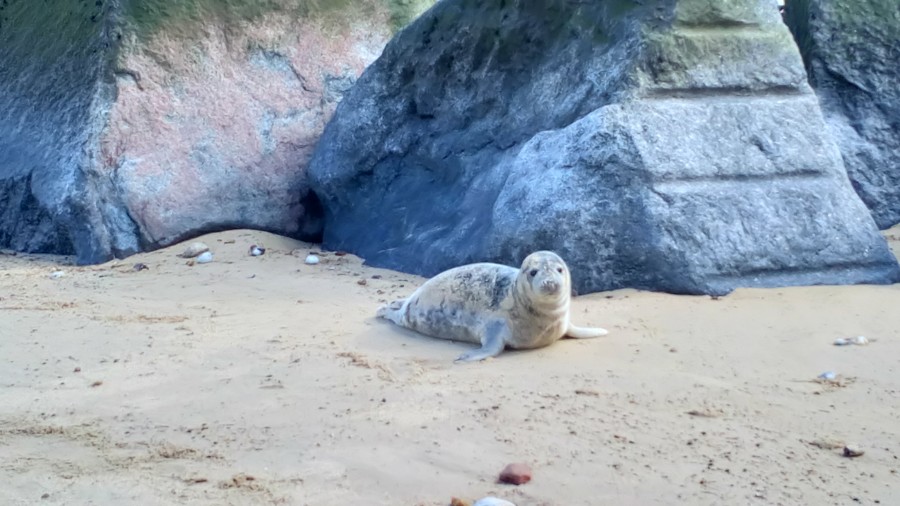 Next day came yet another ‘first’ for both of us when we headed south to regularly flooded Horsey on the coast and took the short walk through the dunes to view the large group of seals that were basking on the sands.

It was mid-morning and they looked like they were resting after a big herring breakfast. Sue’s attention was taken by a large pup, although she obeyed the 10-metre distance rule and managed to keep her finger ends intact.

A quick look at the huge 16th century Paston Great Barn followed (it’s closed due to being a roost for rare Barbastelle bats) was followed by an even quicker look as we drove through big and brash Great Yarmouth on our journey south to little Kessingland, one of the quaintest of tiny bucket and spade resorts. 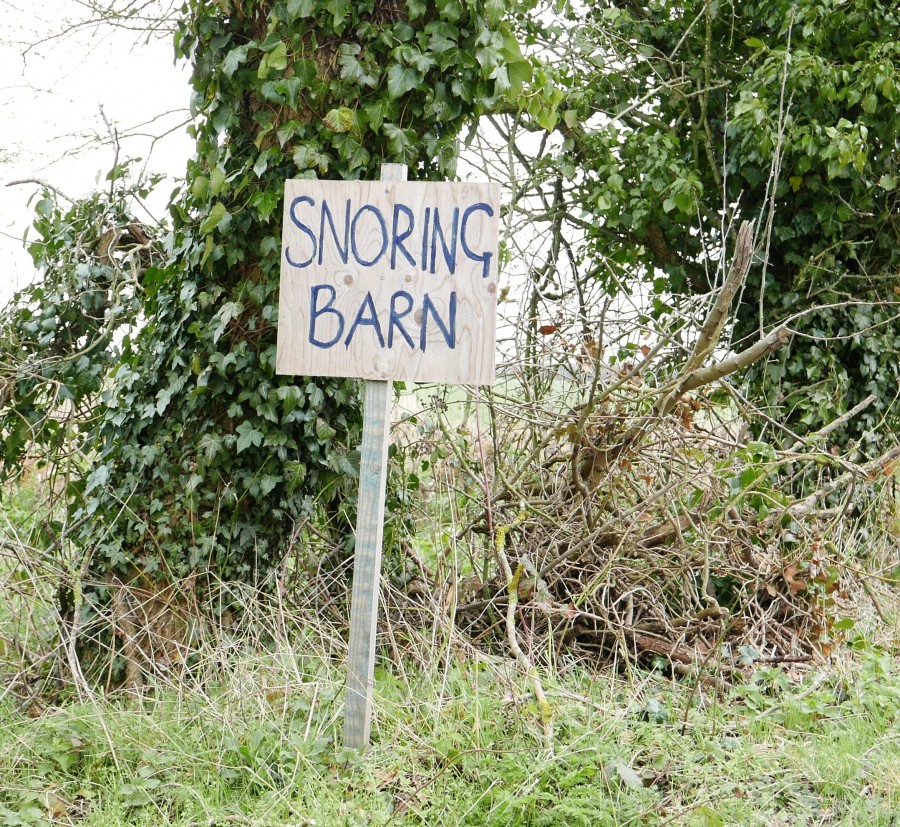 With a shingle beach, this was always an idyllic place in my family memories, despite being just across the Suffolk border (like most British regions, there is a friendly rivalry between the two counties – far less friendly when it comes to the two main football teams, high-flying Norwich City and lowly Ipswich Town).

We wandered the local streets, chatted to the owner of the tiny and last remaining Beach Shop (where I used to take the children for ice creams) and enjoyed tea and teacakes at the nearby cafe, where locals were as much in evidence as tourists. 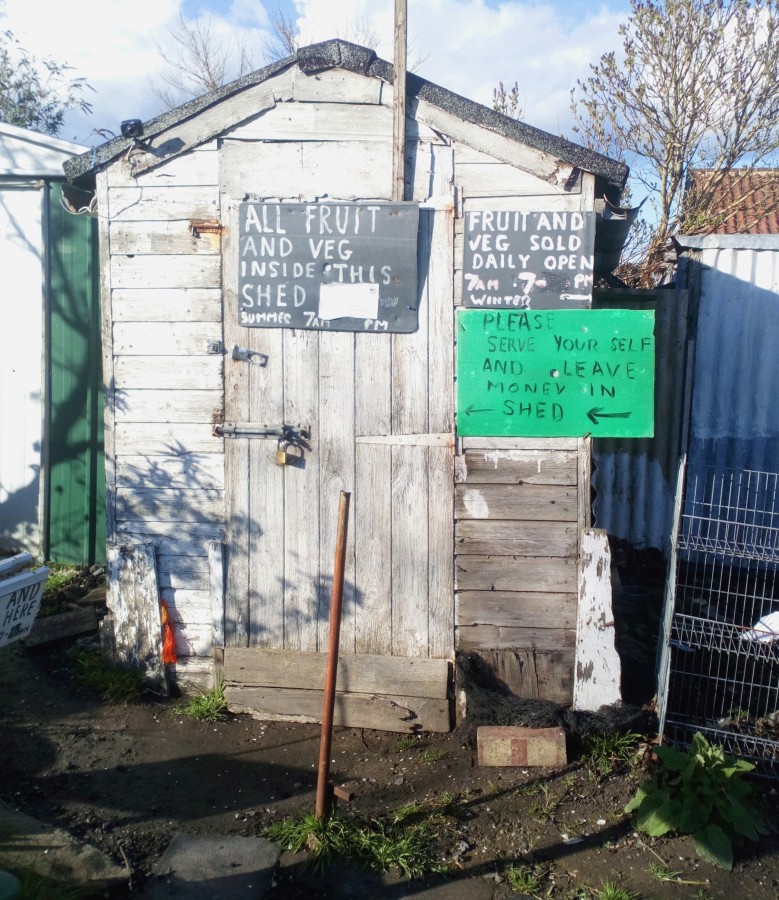 When we finally departed, we were lightly tanned, much heavier and glowing brightly after a gentle journey that had been as full of as many surprises as it had held memories of a place that will always fill my heart with joy.

In the very heart of Norwich and overlooking the cathedral, the 13th century Maid’s Head Hotel is the oldest hotel in Britain and has undergone a spectacular refurbishment of its 84 en-suite bedrooms.  T: 01603 209955 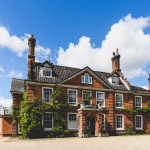 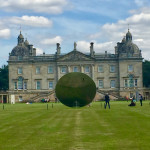 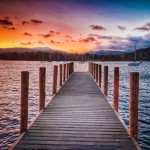