Following on from his first Secret Sky piece, Terry Marsh opens the lid on more Secret Skye locations on the wonderful Isle of Sky.

Of course, there is precious little of Skye that is ‘secret’, but there are places to which only the adventurous among visitors reach, places I should, perhaps, leave you to find for yourself. So, in offering just a few more, you can be sure that I have kept quite a few in reserve.

Many would argue that the splendour of Strathaird is Spar Cave, described by Walter Scott in The Lord of the Isles, as the ‘mermaid’s alabaster grot’. It is not a place for the faint-hearted, although just being down on the coast near the cave is satisfaction enough for many.

The cave lies within a narrow band of limestone and marble that extends from Smoo Cave, near Durness on the north coast of Sutherland, to the south-east and across Skye. 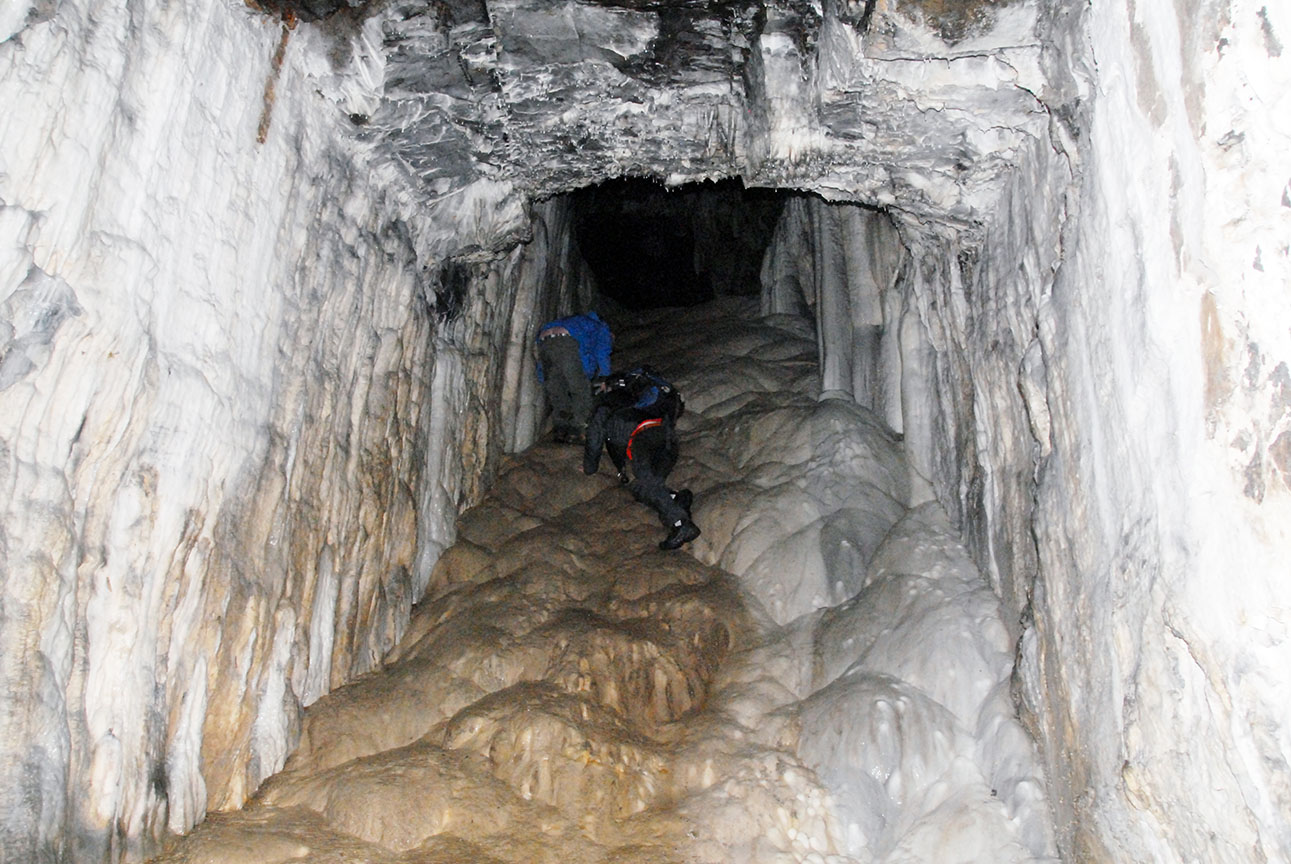 Visiting the cave requires planning and great care, and should not be underestimated. The cave is accessible for only one hour either side of low tide, and not always then. Check the tide tables before venturing out and ensure you leave enough time to get back before you are cut off. You will need wellington boots, ideally, and a good head torch.

The ruined village at Lorgill is another chapter in the story of the Highland Clearances on Skye. This is another of Skye’s lost communities, and a poignant reminder of those troubled times. The ruins of many cottages may still be found on either side of Lorgill river.

It is a peaceful and idyllic setting now, but life here would have been harsh and isolated, and hallmarked by a remoteness that is hard to comprehend these days. 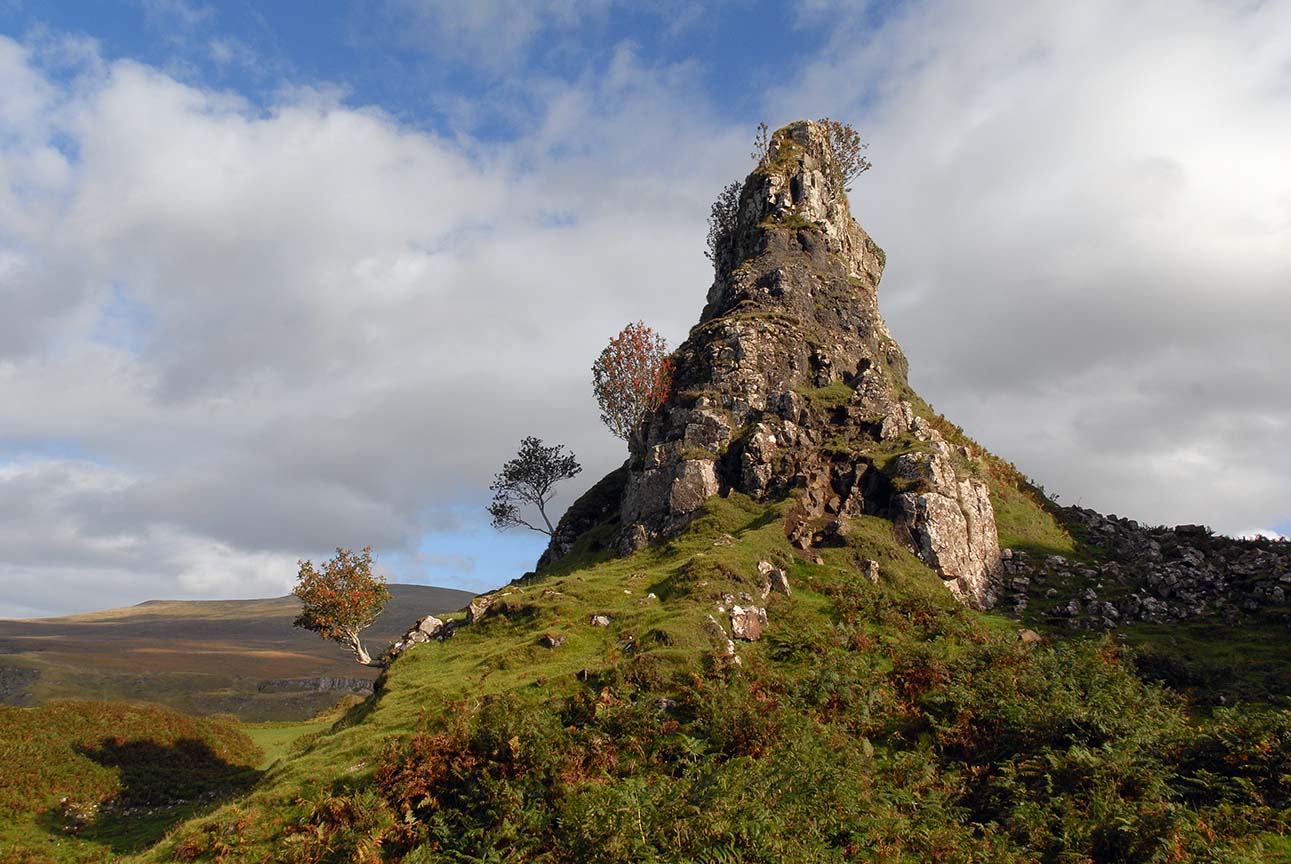 A long drive leads out to the farm at Ramasaig, where visitors must park with full consideration for the needs of this active farm. From there a clear track leads roughly south-east, passing a few abandoned crofts before descending to meet the Lorgill river. Once there, keep to the western side of the river to head down to Lorgill Bay, and one of the most remote spots on the island.

The old coastguard lookout near Meall Tuath may well be as far as anyone needs to go to benefit from the undulating frieze that marks the western horizon, for these are the Western Isles. Between the two, The Minch is popular with all manner of sea creatures, large and small, making this a great place to come with binoculars, food and drink and something warm to wear. 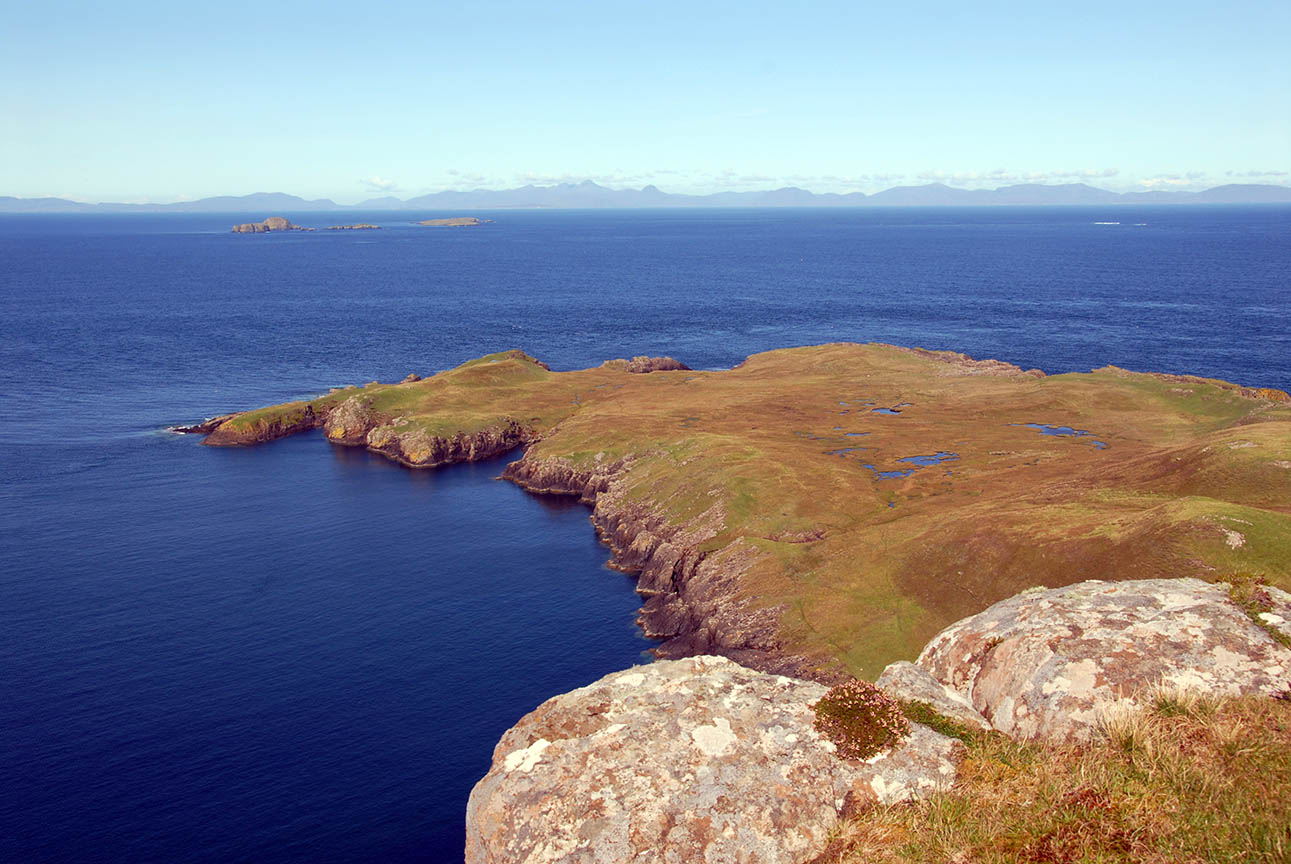 This is the northernmost point of Skye, but getting to the very end involves descending an unfriendly and eroded gully that will not appeal to everyone.

From close by the telephone box at the start of the minor road to Shulista, a new-ish path runs out towards Meall Tuath, above the deserted village (not cleared in this instance) of Erisco.

For years, it never occurred to me that I had never seen a power station anywhere on Skye; and when I did wonder, I realised that I had no idea where the power came from. The answer is Bearreraig, not that this powerhouse is at all visible; in fact, to get to it involves quite a steep descent and re-ascent. But it is worth it because the seclusion is divine.

It is best not to drive all the way to the top of the descent, but rather to leave the car in one of the car parks on the Trotternish road, and walk in. 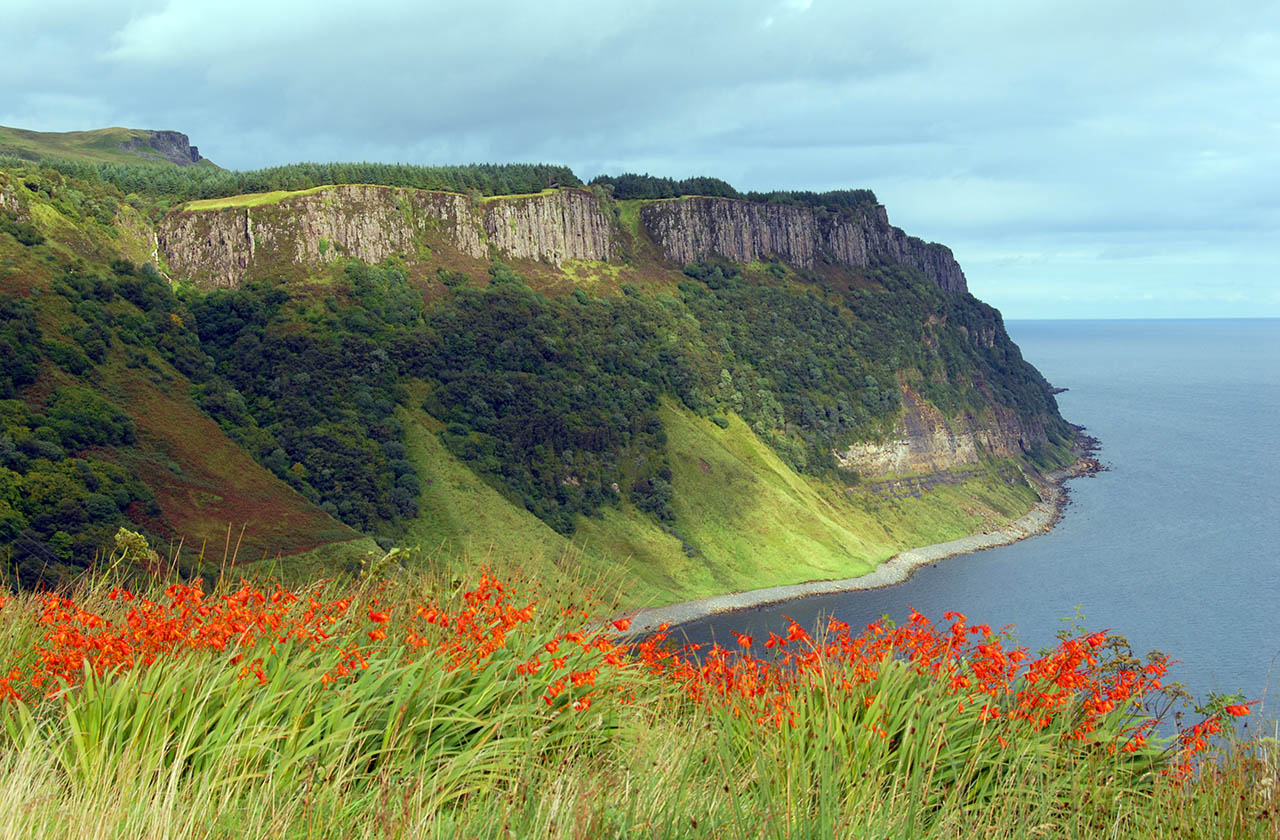 One of the most notable instances of the discovery of treasure trove occurred in Bearreraig Bay in 1891 when a hoard of 28 objects of silver was discovered, along with 92 Anglo-Saxon pennies dating from the 10th century.

Once down at sea level, the bay is rocky and bouldery and doesn’t permit too much exploration, although you can go far enough to spot Holm Island, once believed to be Tir-nan-h’Oig, the ‘Land of Perpetual Youth’, the Celtic Paradise.

DUNAN AN AISILIDH, THE BRAES

This not-quite island is a splendid place of nooks and crannies wherein to pass the day. The Braes itself is the site of a renowned battle for crofters’ rights fought during the 19th century, as a memorial on the roadside testifies.

Getting to Dunan an Aisilidh, an old fort, involves crossing a narrow neck of land, known as a tombolo, a mere 70 metres wide. A tombolo (Italian, from Latin tumulus – mound) is a deposition landform in which an island is attached to the mainland by a narrow piece of land such as a spit or bar. Once attached, the island is then known as a tied island. 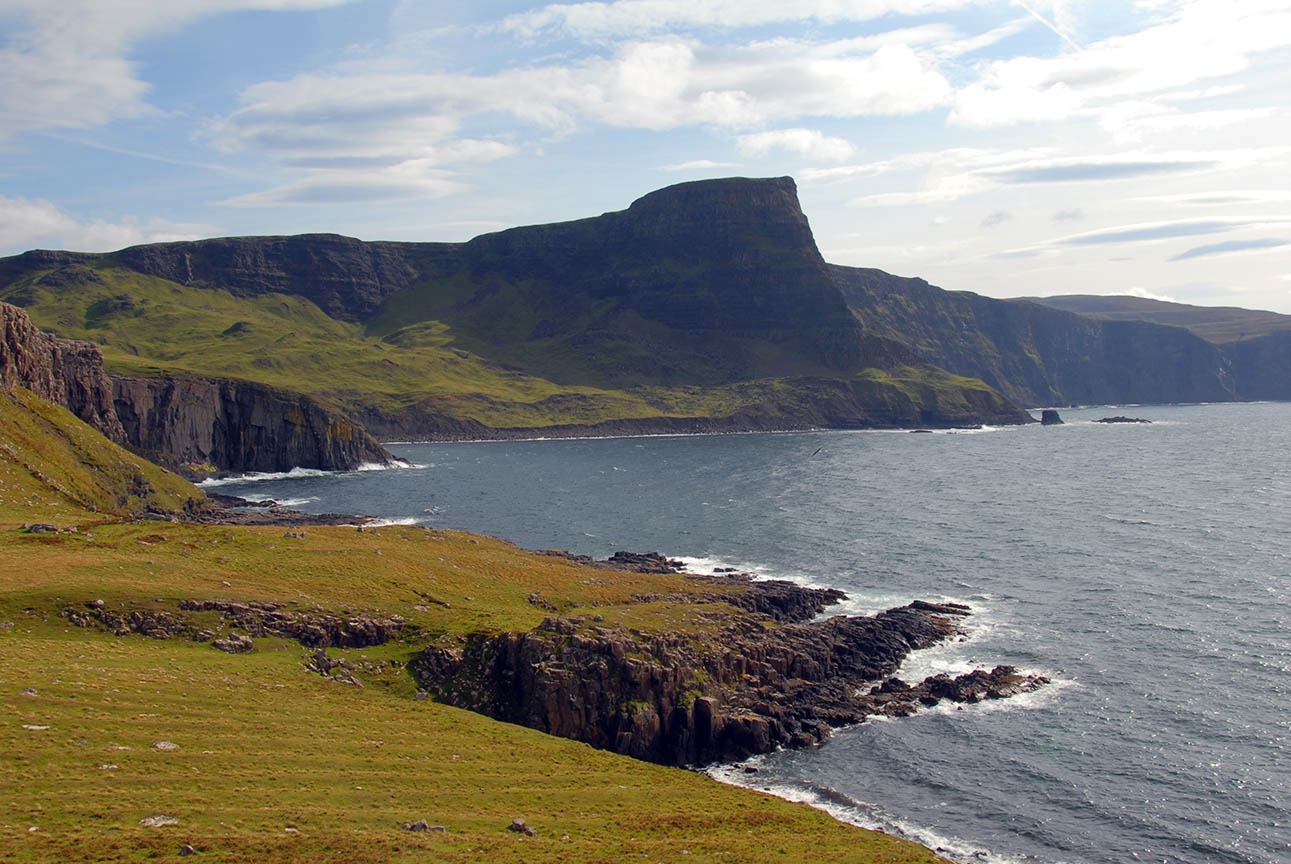 True tombolos are formed by wave refraction. As waves near an island they are slowed down by the shallow water surrounding it. These waves then refract or “bend” around the island to the opposite side as they approached. The wave pattern created by this water movement causes a convergence of longshore drifting on the opposite side of the island. The waves sweep sediment together from both sides. Eventually, when enough sediment has built up the beach shoreline, known as a spit, will connect with an island and form a tombolo.

Once across this is a place to explore at leisure and to walk the length of the tiny peninsula to the remains of the fort at the northern end. But it is peace and quiet and birdlife for which the place will best be remembered. 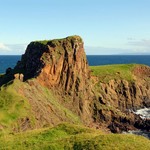 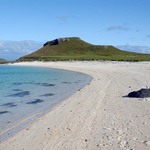 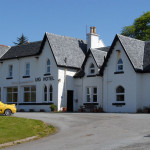