At the hub of Périgord Noir, the vintage town of Sarlat lies in a depression surrounded by a protective arrangement of wooded hills, a medieval settlement that evolved around an abbey with Carolingian roots.

Today, the town’s great charms lie in the fact that modern history has mercifully passed it by, leaving a centre of sympathetically restored stone buildings and slender pedestrianised streets, one of the few Villes d’art et d’histoire in France evocative of the 14th century. Not surprisingly then, Sarlat was an ideal location for Richard Donner’s film Timeline based on the late Michael Crichton’s book about a team of present-day archaeologists sent back in time to rescue their professor (Billy Connolly) from the feisty, brutal realms of medieval France. 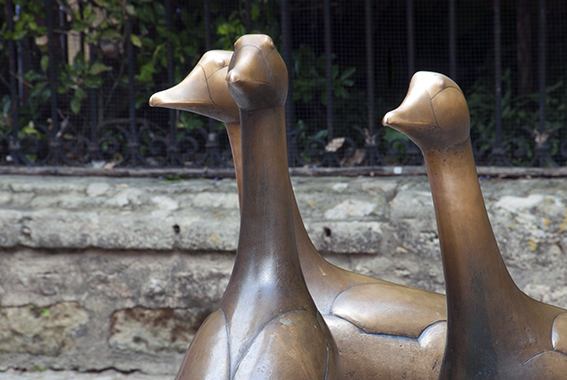 The architectural intricacies of Sarlat are endless. Goose Square (place du Marché aux Oies) is a pleasing mish-mash of turrets, pinnacles and corner staircases, and the place where the traditional Saturday morning market was held. Today, bronze geese mark the spot: you can’t miss them.

It’s a five-minute, downhill stroll from our hotel into the main thoroughfare of Sarlat, by the end of which I was ready for refreshment…no point overdoing things. 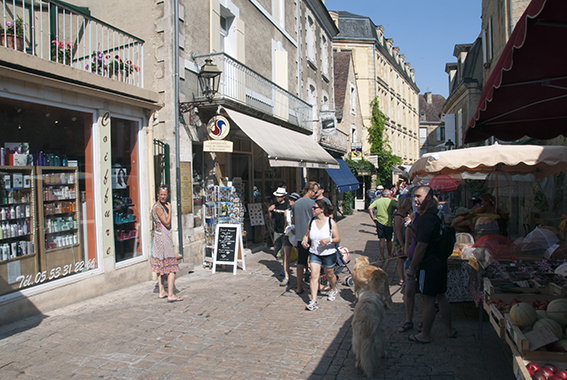 On a corner of the rue de la Liberté, two acoustic guitarists of rustic demeanour and evident anti-establishmentarian inclinations, Jacques Fourgèvre and André Bernard, are playing a splendid, toe-tapping rendition of Sweet Georgie Brown in D major – personally I prefer the slightly higher key of E major, but why worry? – it’s only a tone. 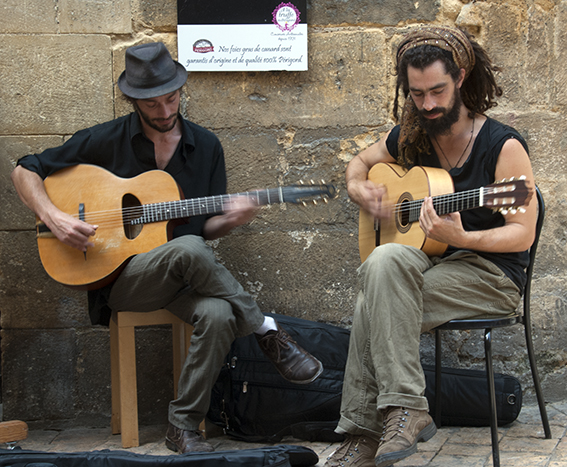 All around, bewildered and wide-eyed first-time visitors to Sarlat, enlightened-elite BoBos. smart-suited business types, and frugal retraités munch on labour-intensive but inexpensive and healthy salades Sarladaises, babble animatedly on cutting-edge Androids and no doubt ponder the meaning of Life as they affect not to acknowledge the raffishly attired duo – alas, their tapping feet give them away.

But I could be wrong about the pondering of the meaning of life bit. 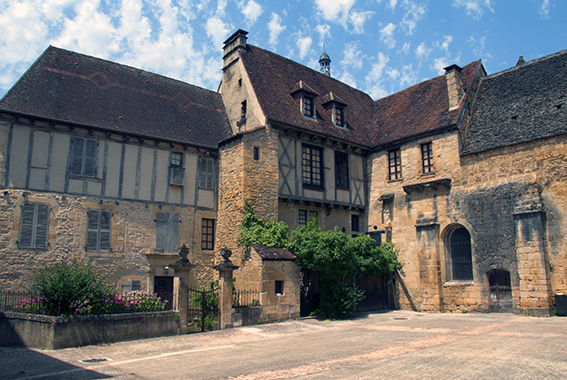 Still, the narrow street is thronged with lunch-gathering ‘Madames’, baguettes akimbo; querulous children; yappy, piddling dogs, and ever-watchful opportunistic cats. Like alien extras from Men in Black, some of the smaller dogs are harboured in glitzy carry bags, from which only eyes and ears protrude in bafflement. It’s all a bustle of unorchestrated chaos and enchantment; not ideal for connecting with the Zen-like pulse of Nature, but perfectly suited for slipping into France mode; a charming chaos that is the essence of lunchtime in urban France.

Such is lunchtime in Sarlat, too. 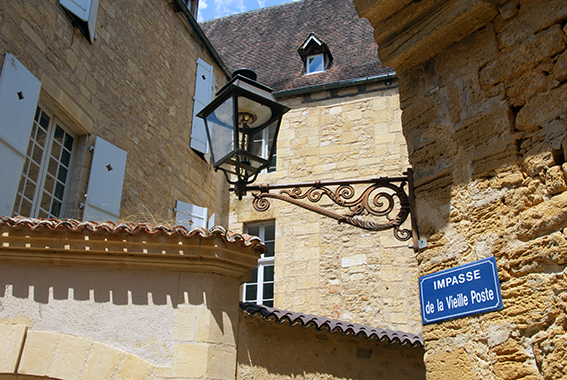 The history of this lush and lavish region between the Dordogne and the Vézère finds articulation in this appealing old market town, a place of medieval streets and restored houses of Gothic and Renaissance pedigree. Not surprisingly, Sarlat sits on France’s Tentative List for future nomination as a UNESCO World Heritage Site, attested by 77 protected monuments and buildings that are more than just cause.

Yet, in spite of this worthy acclaim, Sarlat remains a small, friendly, provincial market town, home to merchants during the Ancien Régime, a place of aesthetic allure, and comfortably embracing.

We wandered to the place de la Liberté, Sarlat’s lively main square, the 17th-century town hall on one side and the disused Église Ste-Marie, now an indoor market, on another. We stopped in the square for a kir, watching the world go by and taking bets on the prospects of a young man at the next table doing his utmost to convince a young damsel that his immediate intentions where honest, before allowing our stomachs to get the better of us and drawing us into the narrow streets in search of nourishment that was a cut above pizza but not quite bank loan territory. 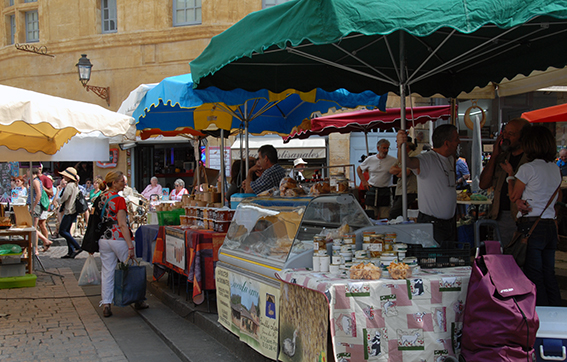 Just off the rue Montaigne we located the shapely 12th-century Lanterne des Morts, one of the many similar stone towers found in the centre and west of France. They were invariably pierced at the top by small openings that are said to have exhibited a light at night to indicate the position of the cemetery. The lantern in Sarlat is the tallest of its kind in Europe, but, as with all such monuments, controversy surrounds their true purpose: was it truly a lighthouse, or perhaps a funerary chapel, or a celebration of the visit of St Bernard in 1147, a time of the plague, during which he gave the sick consecrated bread to eat, which, by all accounts healed them. Either way, this is a peaceful location, and one used during the summer months for staging concerts. 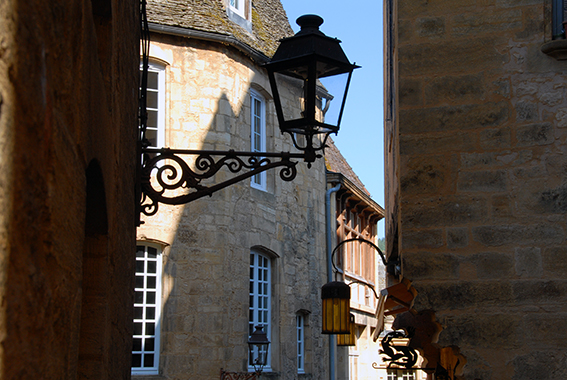 This process of wandering, almost serendipitously, and taking your time to look around, is a hallmark of the Périgord and an effective way of discovering that it is like entering the pages of a history book – it isn’t all about foie gras and wine…or Sweet Georgie Brown.

I want to find out more about Sarlat

Easily accessible from Sarlat is Beynac, one of the most beautiful villages in France, dominated by its chateau. Of similar pedigree is La Roque-Gageac, a one-street town on the Dordogne, on which trips in a gabarre inject a welcome break, overlooked by the belvedere of the Jardins de Marqueyssac.

Terry Marsh travelled to France courtesy of Brittany Ferries and stayed at the Hotel la Couleuvrine as a guest of Sarlat Tourism.

The Roman glory of Nîmes