Solange Berchemin stays at the stately Stafford Hotel in Mayfair and feels right at home.

The Stafford London has long been one of London’s most consistently brilliant hotels. Enviably located near some of the capital’s historic landmarks, near Buckingham Palace, and a stone’s throw from St James’ Palace. It was once the private residence of Lady Lyttelton, daughter of the then Earl Spencer (as in Princess Diana’s family). Despite its iconic Mafair location, the Stafford London is discreetly tucked away in Edwardian grandeur in St. James’ Place with 107 rooms and several luxury categories.

Like all megalopolis, London is a city with many facets. The Mayfair part of London is built around short mews, secret alleyways, and nooks and crannies. An entire world of understated elegance and peaceful havens, reserved for a very few, and the Stafford London is an excellent way to experience it for yourself. 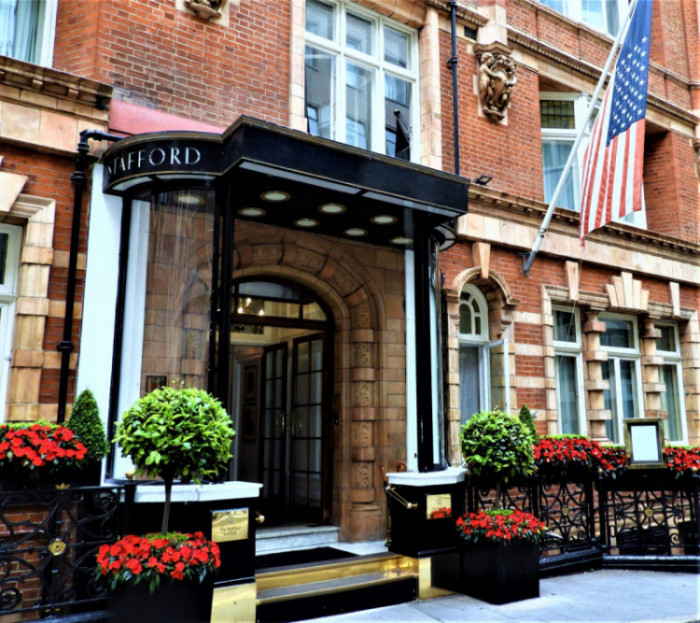 Following the 2018 multi-million pound redesign of its historic Carriage House and Gatehouse, The  Stafford now offers more contemporary dwellings. During the various lockdowns, the designers turned their sight on the main house.  As the grand plan is now completed, the Stafford is a hotel that caters for a multi-generational clientele and offers a lot of flexibility. 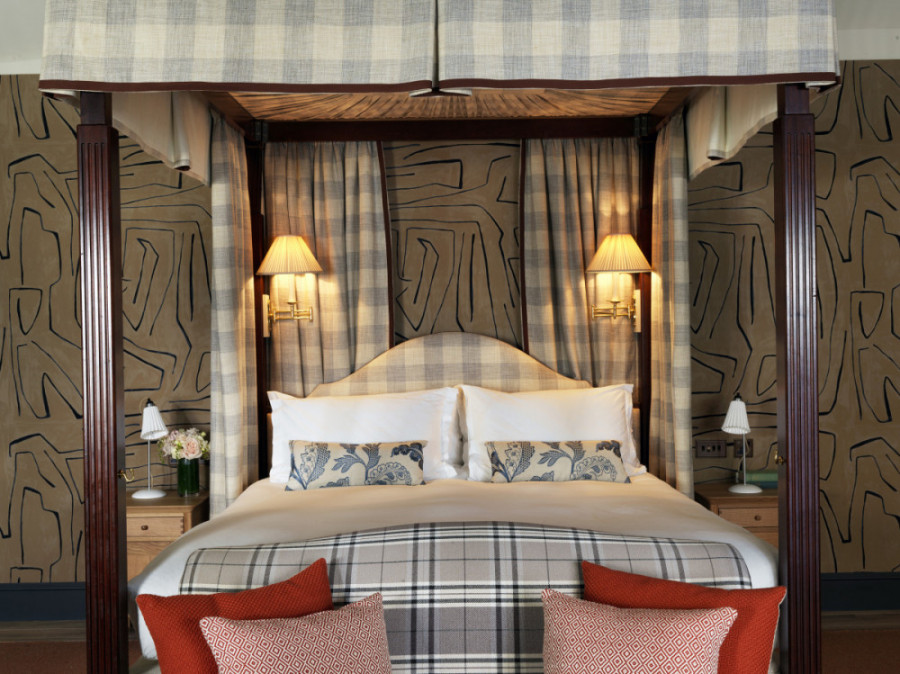 The Carriage House is probably the most striking of the Stafford’s buildings. Accessible via the mews, it is set within a historic 380-year-old Grade II listed building. Once the former stables of a British nobleman and politician. The Carriage House’s rooms and suites serve as a chic and private oasis, offering guests understated opulence overlooking a quiet, cobbled courtyard.

The rooms and suites in the Carriage House have been individually crafted to cater for affluent millennials. The lines are clean and sleek, with aboriginal designs on the walls, a surprising choice that nevertheless fits well within a centuries-old building. Throughout, the hotel, the bathrooms are remarkable but, in the Carriage house, they have a little extra: Toto Japanese toilets, and yes, I did ask: the toilets don’t talk. That would be a step too far in a historic dwelling. 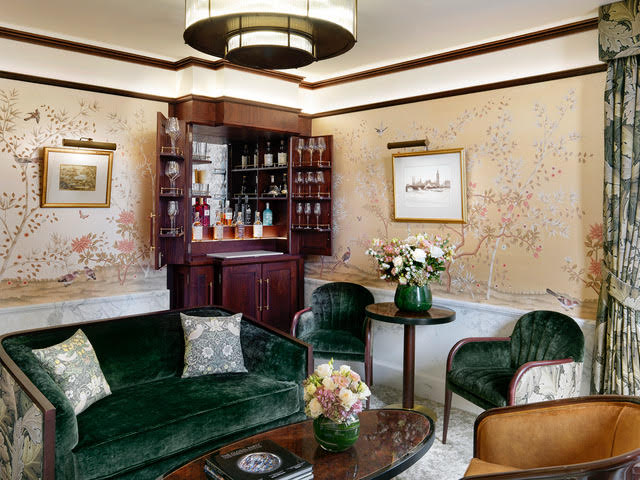 Numbers 16-18 St Jame’s Place, or as it is now known the Main House, were originally built as a private residence. The building structure has not changed and where the top floor rooms were the staff quarters they now are cosy luxury rooms. In this part of the building, each room is uniquely furnished. On the lower floors, suites are larger. The Park Suite offers separate living and sleeping areas accessed by an interconnecting staircase, and featuring a vast outdoor terrace offering guests an ideal space for relaxing and entertaining. It is said that luxury is in the details, and here the details are a fabulous art collection. Walls are adorned with Lowry,  Banksy and many more famous artists’ paintings. The chandeliers and furniture could have a proud place, next door….at Buckingham Palace. 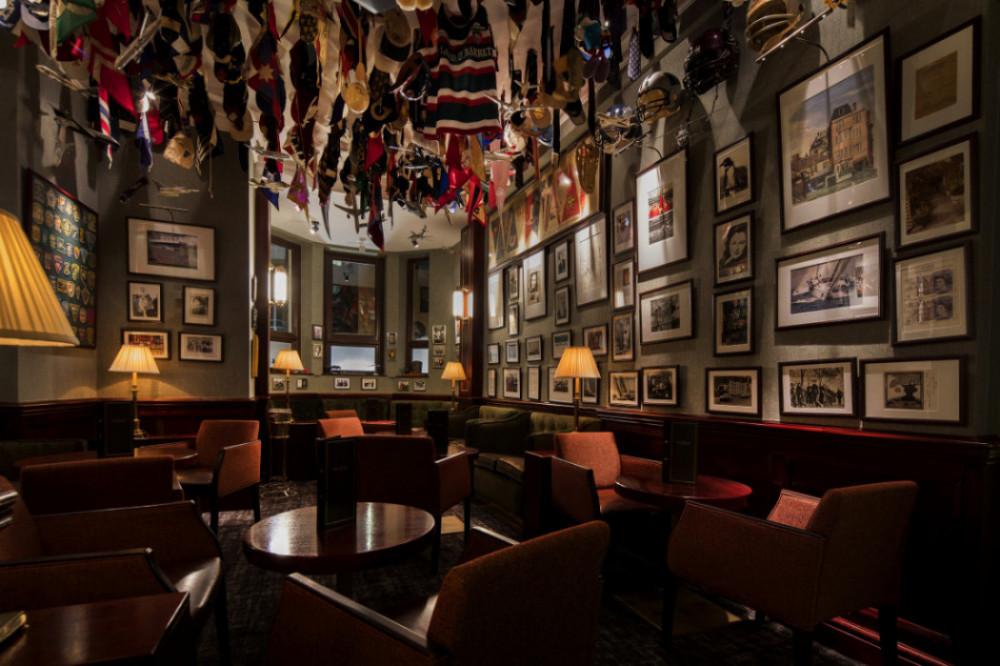 The American Bar situated in the main house needs little introduction. It became renowned in London and Paris during the 1920s and 30s and remains one of the longest surviving American bars in London. Every inch of it is covered with memorabilia, not only photos of the rich and famous who sipped cocktails here, but also baseball helmets and intriguing artefacts donated by patrons and guests over the years. In a passing comment Steven McGovern, director of Sales, let drop, ‘Our neighbour, Prince Charles had his stag do in the Stafford American Bar.’ But pressed for more details, the hotel staff remains silent.

With its limited number of indoor and outdoor tables, it’s in the American Bar that you can really appreciate the attention the staff gives to each person. Steven Mc Govern again, ‘There is very little turnover among our staff. One of our receptionists has been with us for 40 years, our concierges have won prestigious awards and know the clientele well,  and indeed, every member of staff takes pride in their role. They will even get you a booking in restaurants that are famously booked six months in advance.’ I made a note to self to try asking next time. 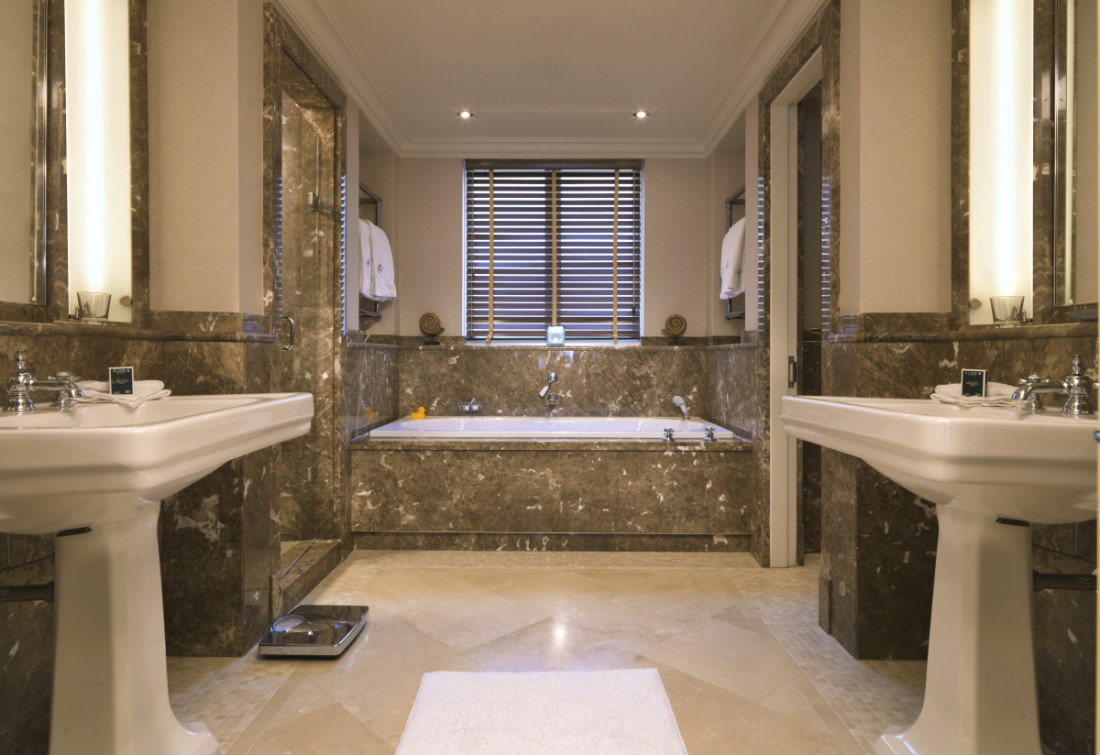 We stayed in The Mews Master Suite where rooms have a dainty Juliette balcony and the building has a private entrance. Our suite was spacious. When I commented on the size of the bathroom, the charming receptionist giggled and said, ‘Indeed, my own London room is not much bigger’. The rooms are often booked by families who need interconnecting rooms, or executives who like extra space for work. 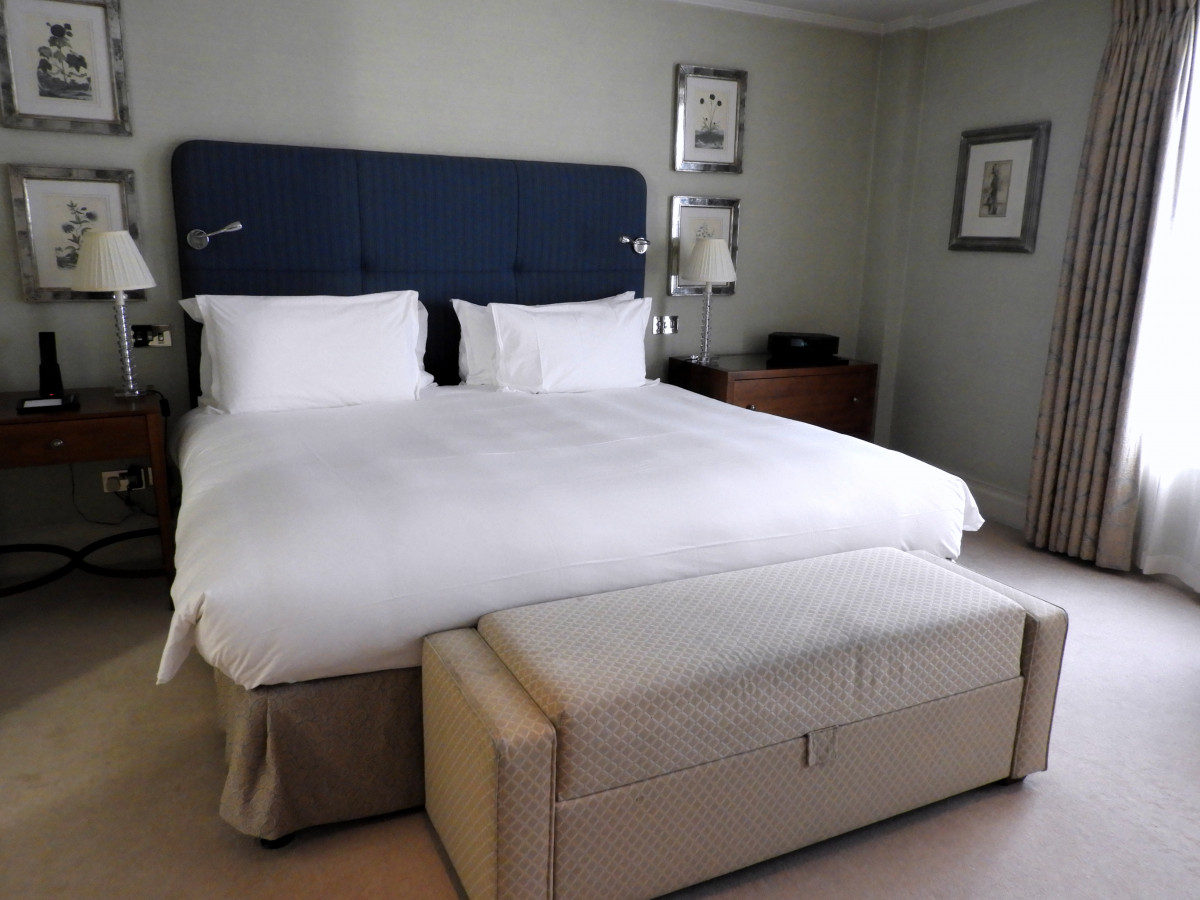 The separate living area included a working fireplace and all the facilities one can think of. Extra-fast broadband…. that works, and in our case, we were welcomed by a lovely card signed by the staff with the words Welcome Home. That is what I call, ‘classical elegance’.

Tell Me More About The Stafford London 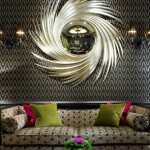 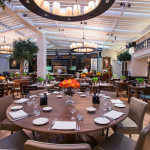 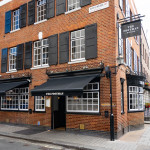