Rupert Parker is feeling very biblical as he takes a guided tour across the treacherous Somme estuary at low tide.


WW1 is forever linked with the Somme, but there’s far more to it than tragic battlefields. As it reaches the sea the river widens out into a huge 14km estuary and has a tidal range of eleven metres, the second-largest in France after the Seine. Its vast expanses of sand and marsh provide a unique habitat for birds and marine life, including a colony of around 300 seals sitting on its sandbanks.

On the south side is Saint-Valery-sur-Somme, fishing and sailing boats moored in the port, an artistic retreat for 18th-century writers like Victor Hugo and Jules Verne. On the north is Le Crotoy, now a bustling holiday resort, but once a base for impressionist painters like Alfred Sisley and Georges Seurat, drawn by the quality of light. The two towns are linked by a narrow-gauge railway, the Baie-de-Somme steam train, which runs 15 km around the estuary, but at low tide, it’s possible to cross the bay on foot. 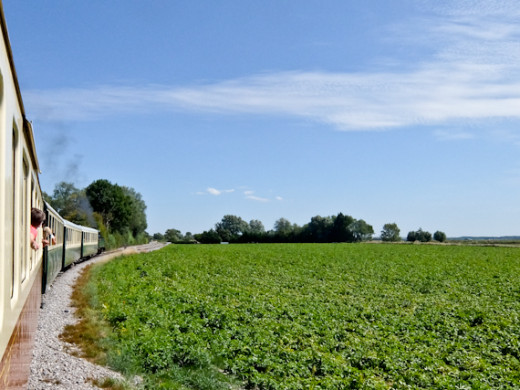 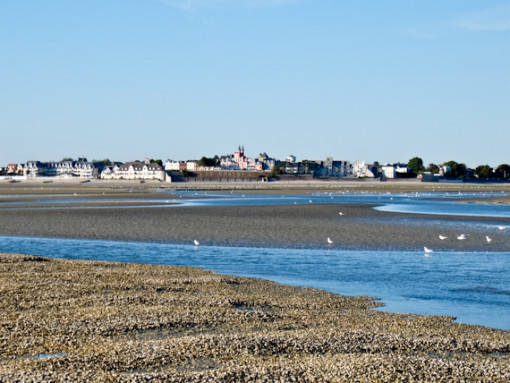 Arriving in Le Crotoy at high water I take a refreshing dip from the narrow beach, in the mix of fresh and saltwater which is the Somme estuary.  Soon the sea begins to recede, exposing large expanses of mudflats, fair game for foragers. They’re digging for mussels and clams, hidden in the sands, but also picking green salicorne growing on the surface. I can see Saint-Valery-sur-Somme, just three kilometres away across the bay and that’s going to be the starting point for the crossing. 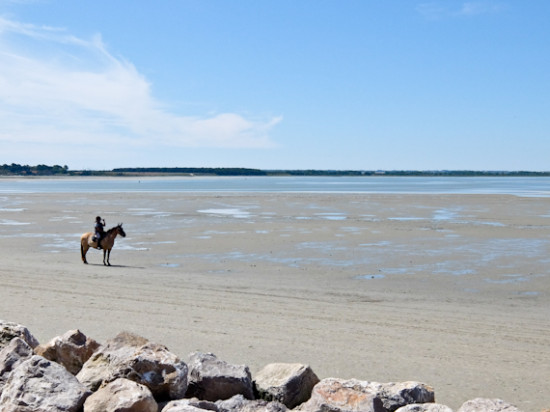 Meeting up with Arnaud, my guide, and the rest of the group at Le Crotoy Station we board the belle-époque carriages. We’re lucky to be pulled by a steam engine and are soon whistling past brooks lined with willows, across salt and freshwater marshes, to Noyelles-Sur-Mer. Here we meet the train coming the other way and the engine has to change ends before proceeding.

It’s about an hour to Saint-Valery and our small group gathers by the side of the river for a briefing. It’s a mixed bunch with small children, some seniors and an excitable large Weimaraner who I’m convinced will pull his owner into the quicksand. Everyone is wearing sandals or wellies as we’ve been warned we’ll be wading thigh-deep in water and mud. 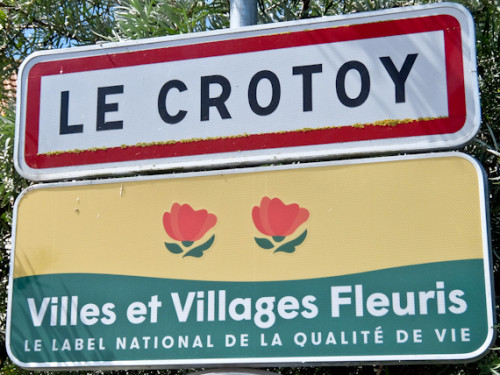 Le Crotoy looks deceptively close but Arnaud explains that it’s not possible to walk in a straight line as currents and quicksands render it treacherous. It’s very confusing as we start off in the opposite direction but double back to descend to a narrow channel of water. The bank is slippery and Arnaud slides into the water to gauge the strength of the current. We wait as he carefully wades across, finding the shallower trajectory, before he reaches the other side and gives us the thumbs up.

News reports about a group of Chinese cockle gatherers who perished in the mudflats of Morecambe Bay some years ago flash into my head but in fact, there’s nothing to worry about. We all troop across in line, careful to not to lose footing on the slimy bottom, and are soon back on relatively dry land. The procession behind me reminds me of depictions of Moses parting the Red Sea and it does feel like something of a pilgrimage. 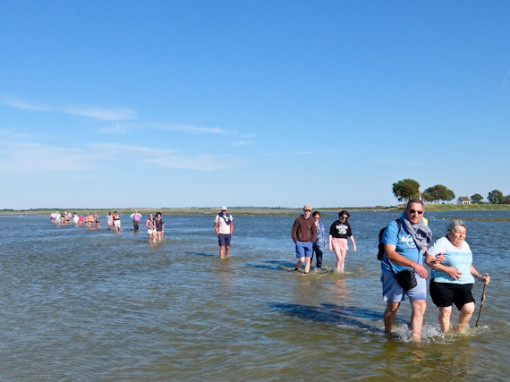 Another biblical parable comes to mind as we seem to be making no headway through this muddy wilderness. Indeed, after an hour we’re back opposite Saint-Valery, only separated by a narrow channel, which I’m told is too deep to negotiate. Arnaud explains that because the sea covers the landscape twice, a day destroying any waymarks, every crossing is different. 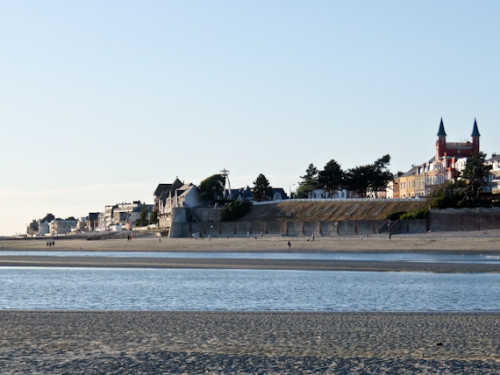 The sun is getting lower on the horizon as we edge closer to Le Crotoy and the light is failing fast. Even in the last few hundred metres, we’re still not able to go in a straight line but we eventually we’re on the beach, climbing up to the port. It’s been four hours of walking and we make a bedraggled bunch, dripping mud and squelching water. Diners, taking their after-dinner exercise, stare at our merry band emerging from the sea. We’ve made it just time to enjoy a glorious sunset.

Tell Me More About Crossing The Somme Bay

Eurostar runs from St Pancras International to Calais or Lille, then take a local train to Rue.

Aux Trois Jean in Le Crotoy has a few pleasant rooms above its restaurant, some with a view of the bay.

Hire a bike from NoShoes in Le Crotoy, and explore the bay, taking in the bird reserve of Parc du Marquenterre. 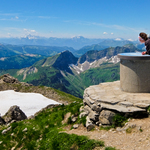