Bavaria In the Footsteps of Hitler

Bavaria In the footsteps of Hitler. The music coming from behind the closed door of room 105 up on the second floor was not unexpected given this was the Munich University School of Music and Performing Arts. A building of some majesty it has to be said; marble pillars, two grand marble staircases and art deco balconies everywhere you look. However, this particular building hides a very dark past. In 1938, it was better known as The Führerbau or Leaders House and behind door 105, Adolf Hitler sat in his personal office. The very place where British Prime Minister Neville Chamberlain, Hitler and Mussolini signed the Munich Agreement,  an act which ultimately led to WW2.

The irony was not lost on the man accompanying me, Dr. Winfried Nerdinger, the founder of Munich’s brand new museum chronicling the history of the Nationalist Socialist Party currently being built next door on the former site of the Nazi Party headquarters. “I feel this a form of exorcism through music” he tells me, ” This buildings’ history has been replaced by uplifting music and expression.” 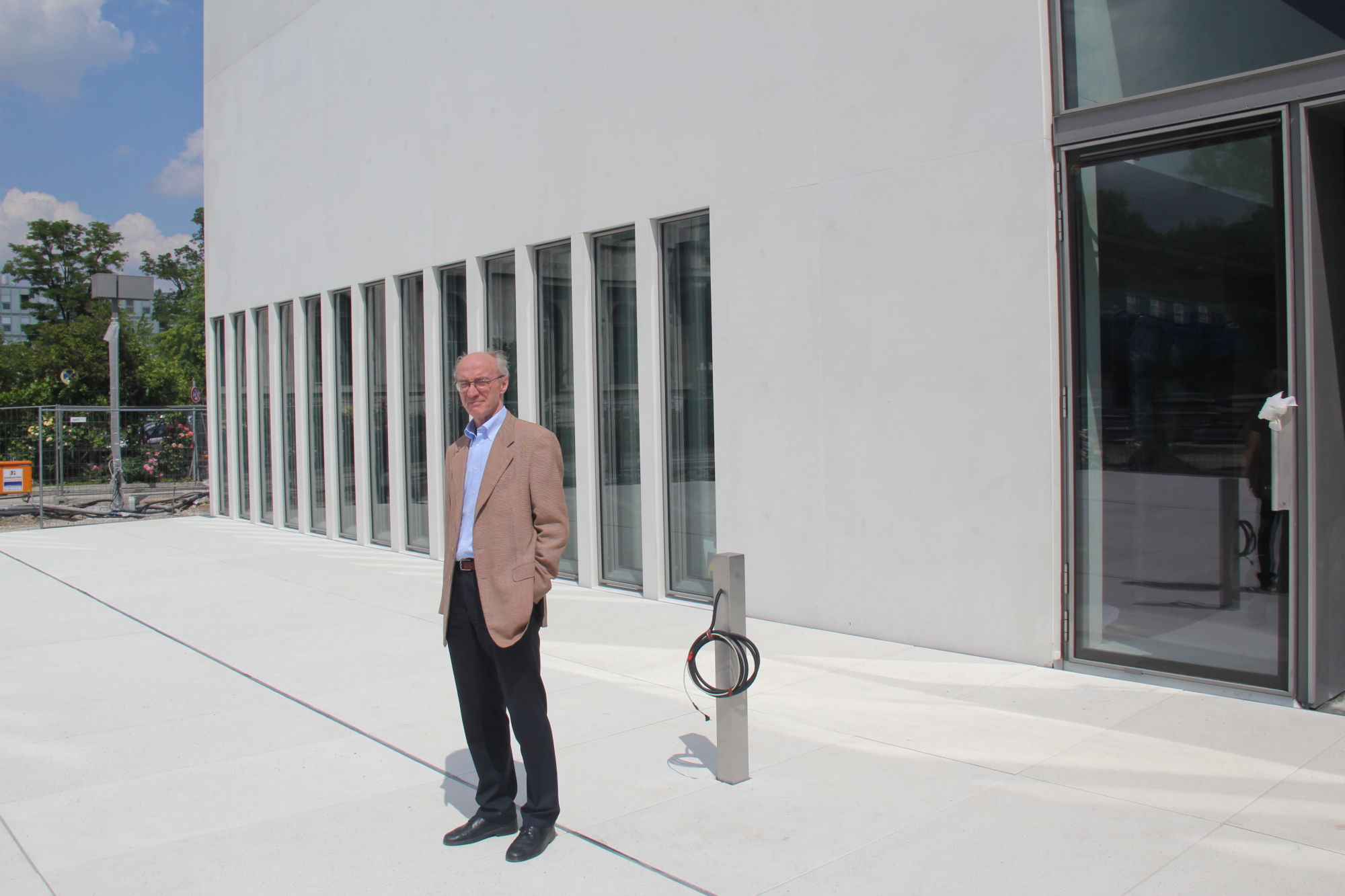 Dr. Nerdinger and many citizens of Munich have long campaigned for the new museum; a chance for Munich to officially address the history of the Nazi movement in the city of its genesis.

With Germany’s decision to officially recognise the Nazi party and its evil crimes as part of its history, it wants to ensure people are educated about it correctly and appropriately which is to be applauded. So I wanted to know more about why Bavaria became such an important region for Hitler; walking in his footsteps from his seat of power in Munich, to the grandeur of the rally grounds in Nuremburg and up into the stunning alpine mountains of Obersalzberg and Berchtesgaden, where he spent more time in his house there than in Berlin. Is there anything left standing from the dust and rubble 70 years on that will help me understand the insanity of those terrible years?

This was the genesis. Where it all began. A growing dissent among the populace with the republican government after WW1 and a particularly effective band of reactionaries in Munich’s beer halls who, with the financial backing of wealthy influential citizens, promised a return to greatness. The city was a fertile breeding ground for extreme right wing thinking and in1919 the German Workers’ Party was founded which eventually materialised into the National Socialists; the Nazi Party.

Today, one notorious beer hall still stands, albeit a highly renovated version; The Hofbräuhaus, the very place where Hitler announced the political manifesto for the Nazi party in front of an audience of 2,000. It’s a huge building and for obvious reasons a popular tourist destination, but just as popular with the locals, drinking beer from their own unique porcelain beer mugs stored for safe keeping behind gated shelving.

Just around the corner from here at the head of Odeansplatz on Ludwigstrasse is the infamous Feldherrnhalle monument, the scene of Hitler’s failed putsch on the 9th November 1923. His attempted overthrow of the government came to an abrupt end right here after 16 members of his group were killed by the Bavarian police and he was imprisoned in the Landsberg Fortress for nearly a year where he spent the time writing Mein Kampf. 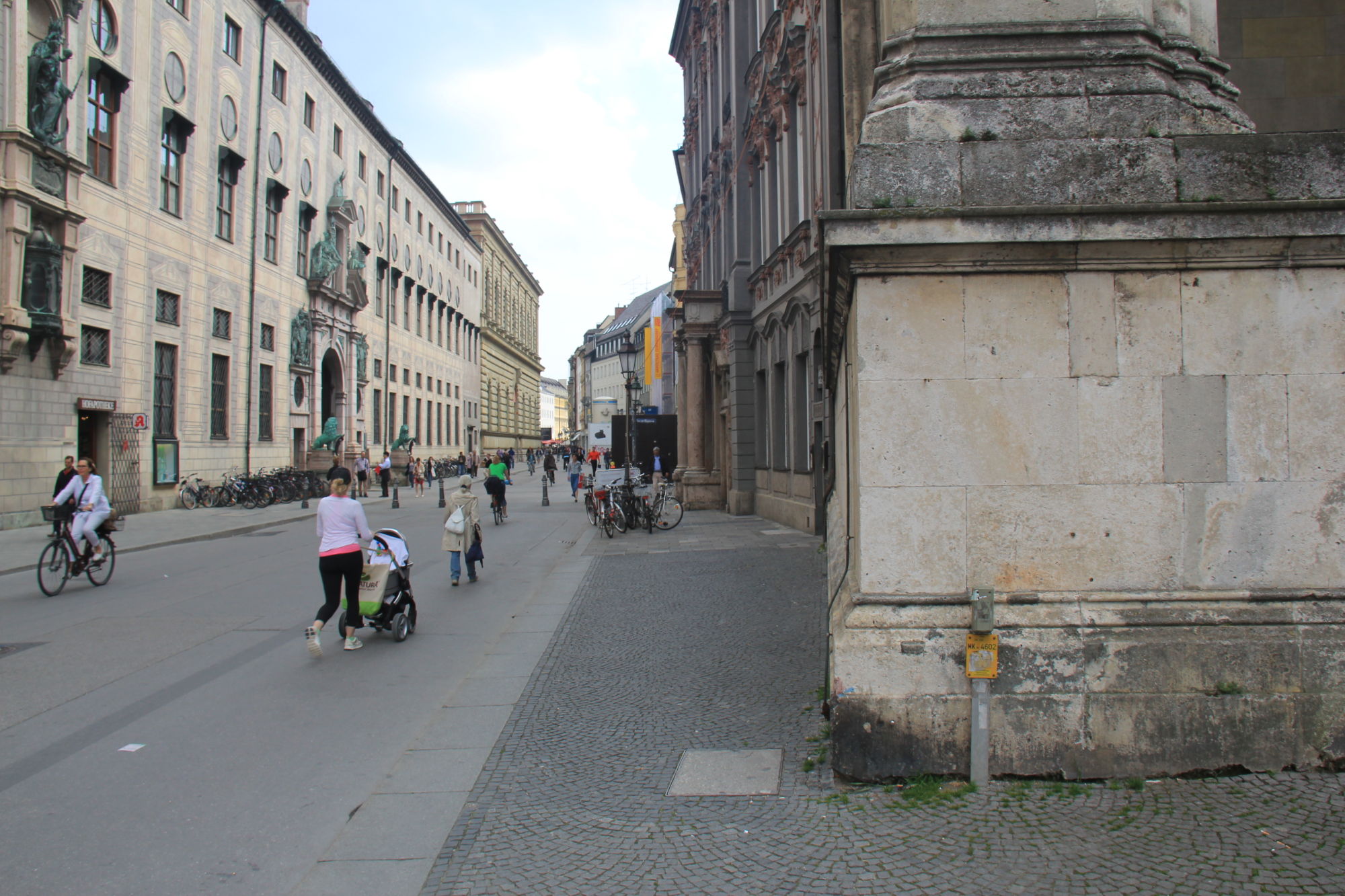 After his eventual rise to power, the “16 martyrs” as they came to be known, would play an important role for the Nazi propaganda machine. The failed putsch was reinterpreted as the “March on the Feldherrnhalle” and a “24 hour guard of honour” was created on the spot where they fell, just on the front right side of the monument. Munich’s citizens had to salute each time they passed, so to avoid it, they took a detour through Viscardigasse, and it became known as “dodgers alley” – still there today. The Feldherrnhalle is still symbolic for demonstrations against neo-Nazism, racism and right wing violence.

The 16 martyrs were also used as a rehearsal for the mass rally system that became a signature of the National Socialists, and no better example of this can be found at Konigsplatz, now a huge open park, but once the Nazi main parade ground in Munich and the gateway to their power-base. Here the “Temples of Honour” were built, a semi-religious cult mausoleum for the martyrs, and every year on the anniversary of the putsch, thousands were made to attend a mass rally to remind them of the origins of the National Socialists and to “keep the faith of the martyrs alive”. This was where the Jewish book burning took place on 10th May 1933 and just behind the Temples, was the “Brown House,” the party headquarters, and just next door, Hitler’s office, The Führerbau. 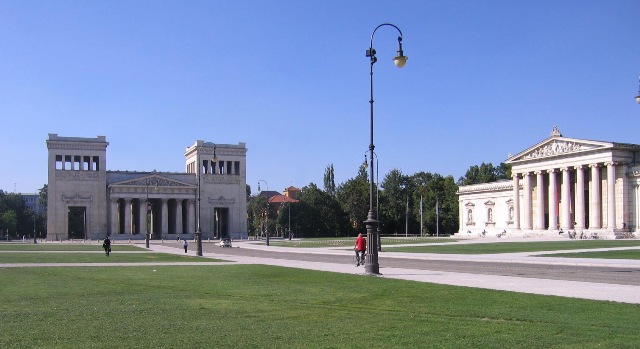 Today’s Konigsplatz has changed very little. The Temples are no more, just the weed and grass covered pedestals remain and on the site of the Brown House, the new NS Museum slowly emerges. A spectacular white cube, which by April 2015 will become a state of the art centre of research, visually documenting the rise and fall of the Nazi party. As Dr. Nerdinger points out to me as we stand on an upper floor looking out of a huge window at what was The Führerbau opposite, “to learn about what happened there and then see that very building still standing in front of you, is something unique for a museum.” 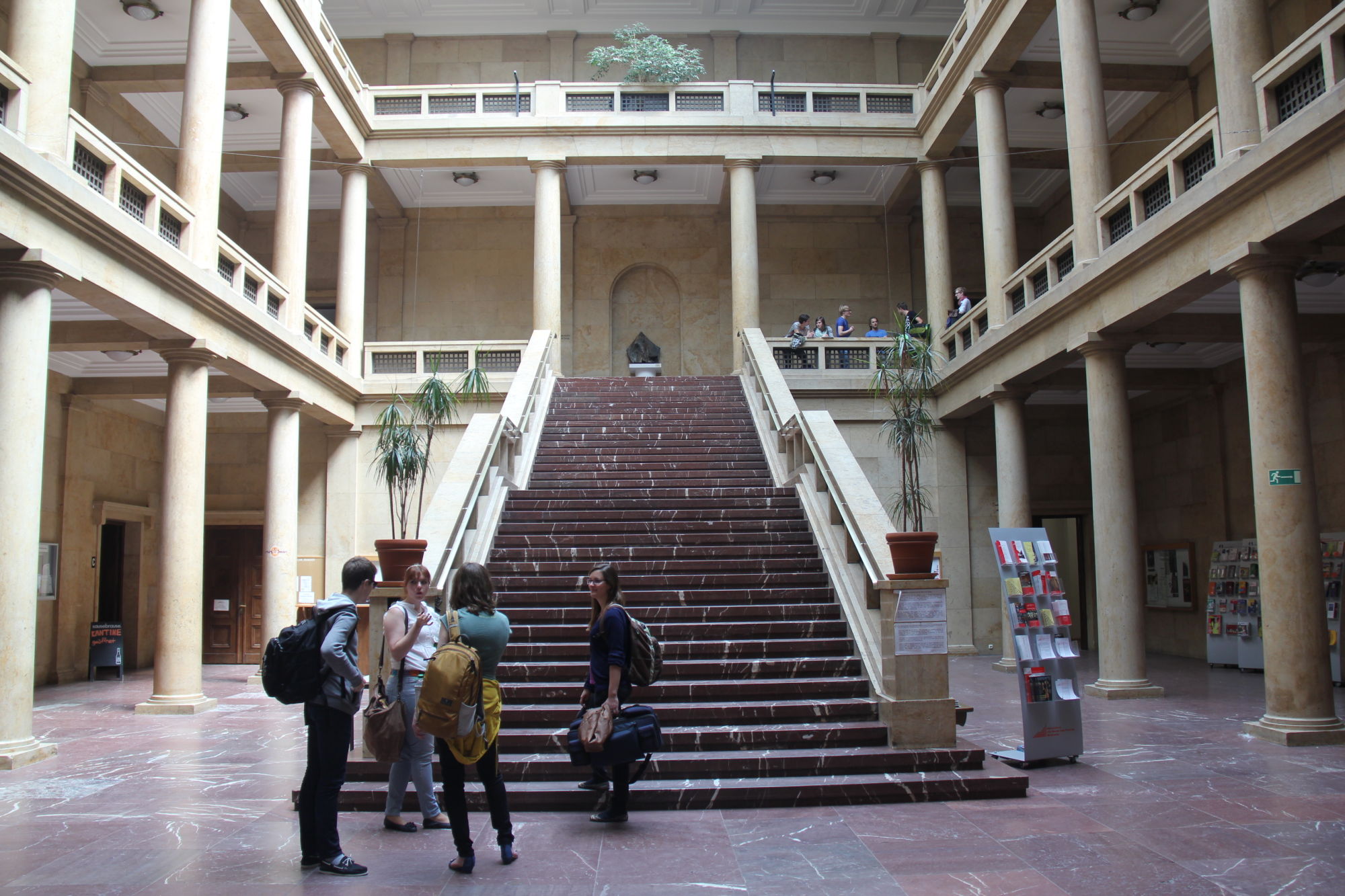 In another twist of irony, the new Israeli embassy will be next door here and then just few minutes’ walk away in Sankt-Jakobs-Platz you can visit the new Synagogue and Jewish Museum opened in 2006 on the 68th anniversary of Kristallnacht – “the night of broken glass” when the original building was destroyed. 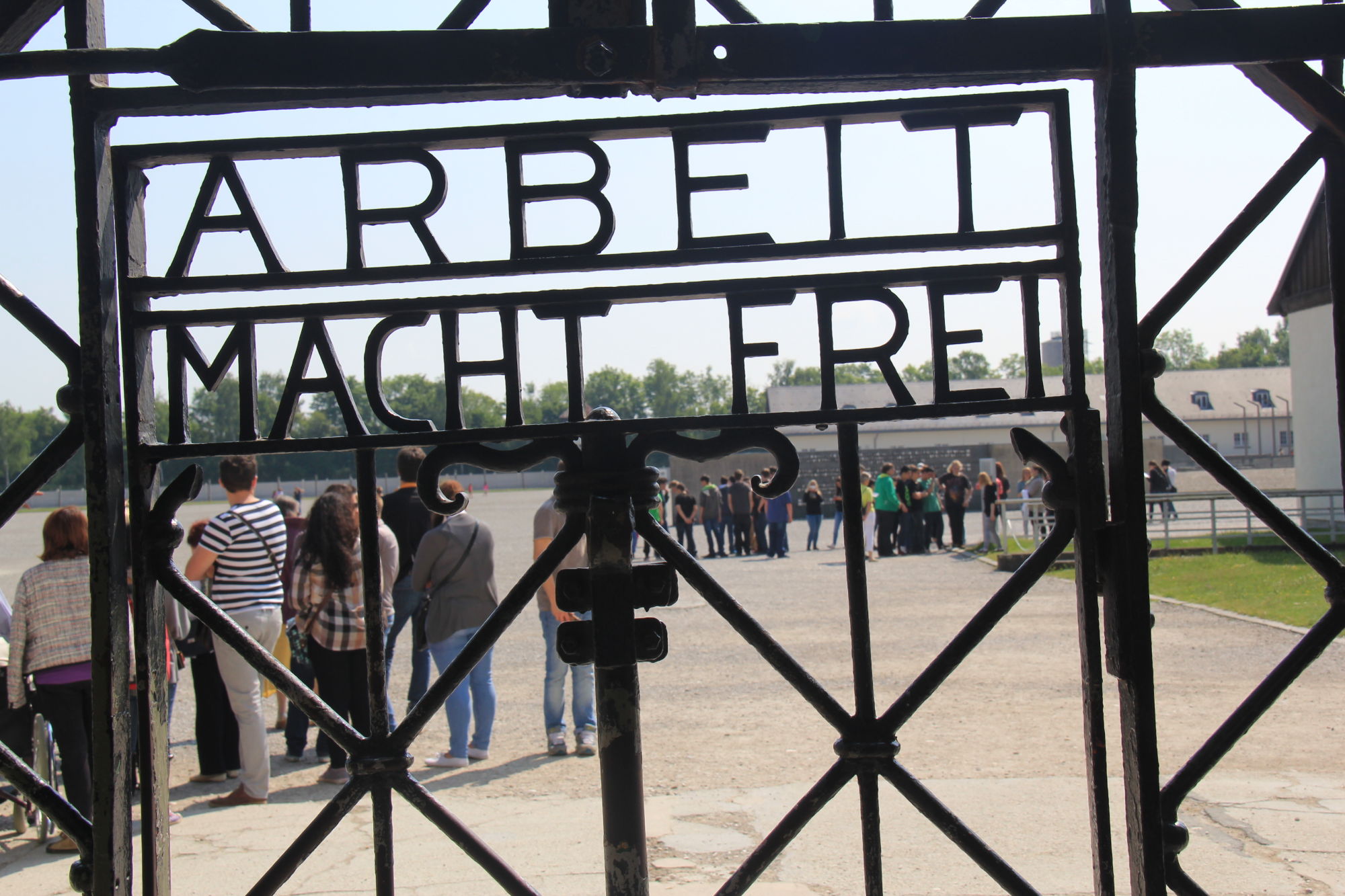 Outside the city centre, just 30 minutes by train, Dachau Concentration Camp is a permanent reminder of what inhuman acts can be perpetrated on humanity; the excellent museum there providing a chronicle of Dachau’s grim history and the Nazi genocide program across Europe. There are guided tours available and I would highly recommend joining one to be able to fully grasp just what happened here. Entrance to Dachau is free and a guided tour costs €3 (limited to 30 people). There are also audio guides available too for €3.50.