It was a tough choice: cycling, kayaking and running with an Olympic rowing champion – or downing fine wine with oodles of fresh fish and juicy steaks. Without a hint of shame, James Ruddy chooses the food option on a glorious Algarve short break food tour based at the Four Seasons Fairways Resort.

Food – like life itself – can be a rollercoaster of ups and downs. As a growing boy with a huge appetite, I was always on a high when my mother served up that rustic Irish dinner of beautifully boiled bacon and cabbage with floury ‘laughing’ potatoes, bursting, joyfully, from their skins.

But when it came to a low there was nothing quite as daunting as my father’s ‘Irish racehorse magic potion’: a nose-holding nightly tumbler filled with two beaten raw eggs and milk, which caused me to gag as it went down, but was probably responsible for turning me into the Arkle of my school sprinting competitions. 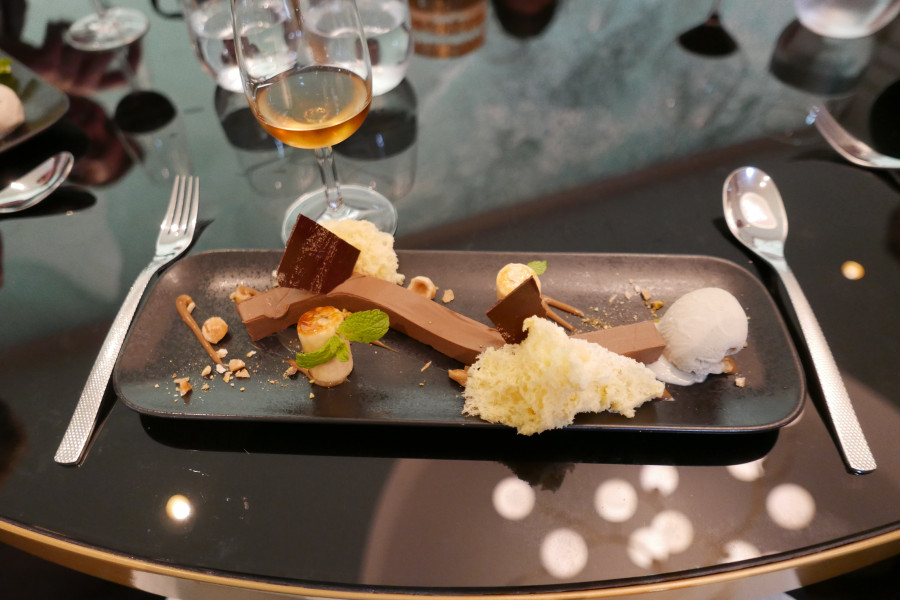 Such thoughts of a distant childhood spring to mind as I munch my way through one of those rare four-course chef’s menus during which not a single ‘low’ rears its head amid tantalizing plates of sautéed Shitake mushrooms, roast octopus, braised leg of lamb and a delightfully naughty chocolate dessert.

In fact, the meal – each course paired with a flurry of specially-curated Portuguese wines – becomes a dreamy curtain closer to three days which leaves my taste buds well-and-truly tickled and my waistline demanding an urgent consultation with Weight Watchers (but what the heck!).

I am in the new Amara Restaurant on the final evening of a foodie short break at the Four Seasons Fairways villa resort, originally constructed by the once-mighty Clare-based builders, McInerneys, and (to reinforce the Irish connection) based in the heart of the luxury golf and family holiday area, Quinta Do Lago, that was snapped up by Dublin billionaire Denis O’Brien over two decades ago. 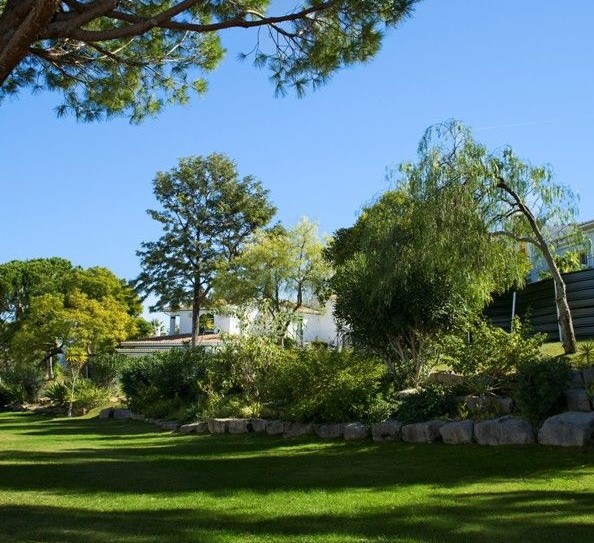 Not being a golf bunny, nor having a young family these days or even the remotest desire to don wobbly Lycra and join the heavy breathers for the resort’s fabled Active Living Package,  operated by Helen Glover, the Double Olympic GB rower, I am drawn, instead, to the food break like some hapless bee heading for a blissful and sticky end in an open honey jar.

This becomes a delicious delve into a kaleidoscope of food flavours, textures and styles influenced by centuries of Arab and Mediterranean conquerors, as well as the shiploads of Asian spices brought into westerly Sagres harbour by ‘local’ explorers Magellan, Columbus and Vasco da Gama.

Little wonder that you can still pop into the simplest of tascas here and find the cook has turned the abundance of local fish, seafood or meats into dishes bursting with delicate hints of Indian cumin, or of Caribbean nutmeg or even North African lemons, raisins and coriander. 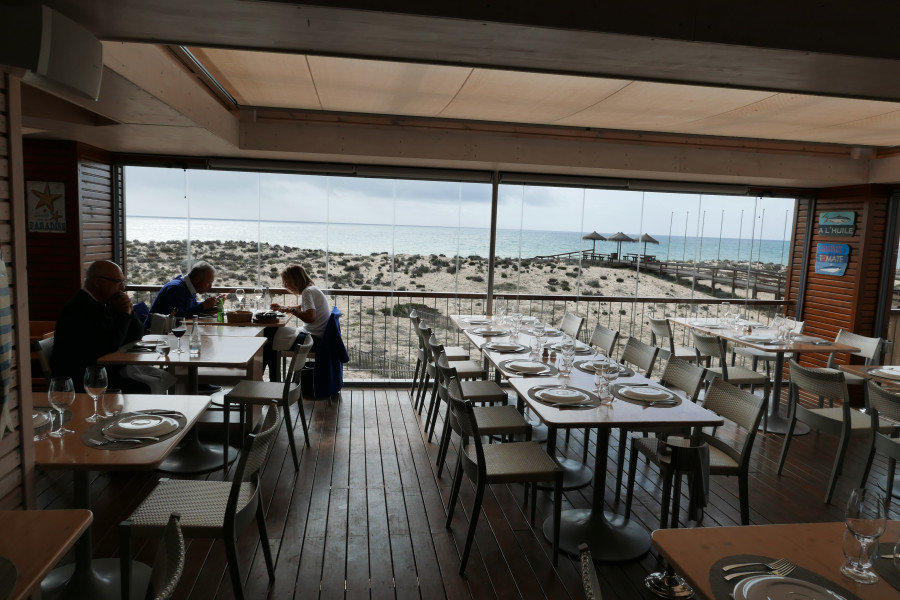 So, clearly, the food tour has to be a must. Flying into the capital, Faro, from Gatwick and travelling in a small and friendly group, my first meal stop is the family-run 2 Passos restaurant, a weathered wood and glass place sitting dramatically on stilts above the sprawling dunes of Ria Formosa Natural Park and the nearby the Atlantic rollers.

The tasting menu here is an eye-spinning plate-sharing selection of fish and seafood from the daily local markets, from juicy salmon gravadlax, fried whitebait and succulent clams to morning-fresh langoustines and sea bass in signature Algarvian tomato and garlic. Desserts are exquisite and include a classic orange salad and three types of mousse, including tangy lime and sugary mango. 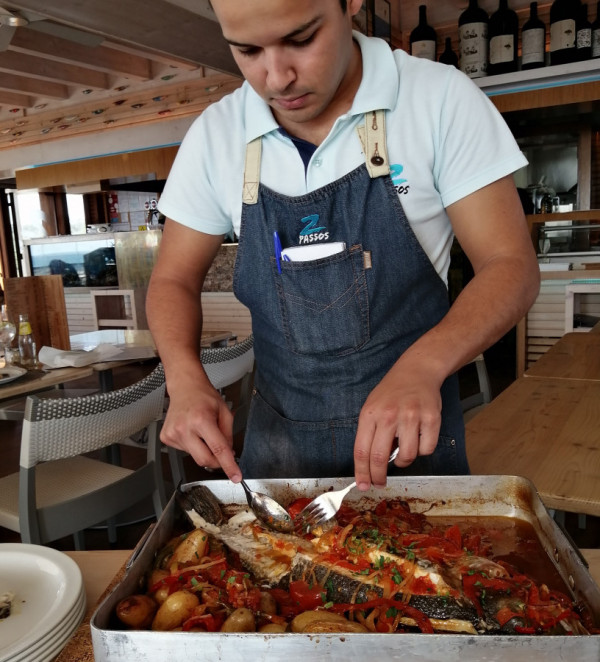 Coupled with two large glasses of the family’s own crisp estate-produced Joao Clara white wine, I am soon enjoying an inevitable afternoon nap at my spacious two-bedroom villa after the short drive back to the Fairways. (Outside, I can hear the puffing of the occasional passing jogger but return, guiltlessly, to my slumber.).

For a completely different experience, dinner follows, just a few minutes’ drive away, at the sophisticated Bovino steakhouse, where I share a platter as the recommended way to sample the glistening rump, USDA New York strip, fillet and prime reserve, all cooked to perfection.

Like a downtown Californian tavern, the ambience is all bygone wood and old bottles, underpinned by the juggling cocktail bartender who mixes me a neat whisky sour, with large dollops of Gentleman Jack from an oak barrel. 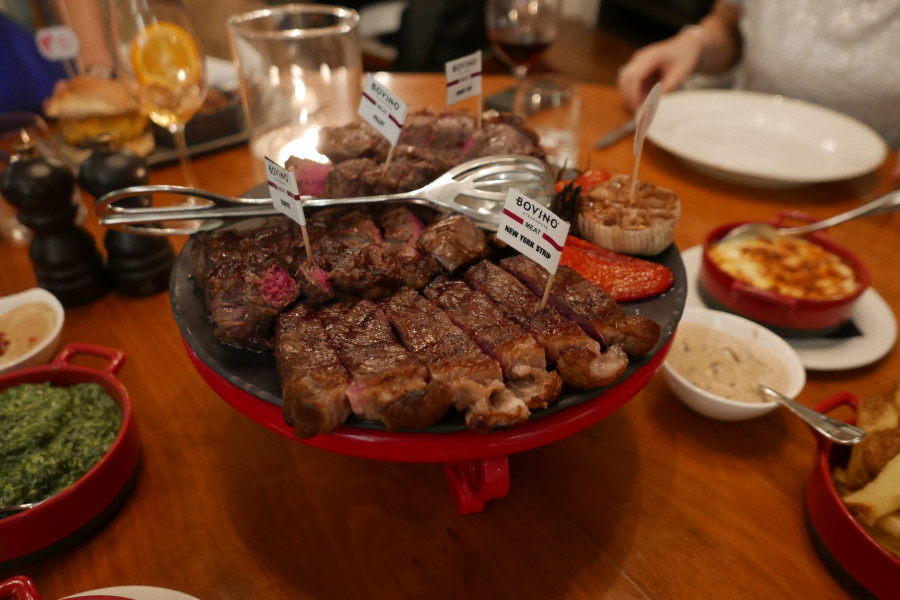 Little wonder that next morning at the Fairways’ cosy Vivo Bistro, I’m hitting a giant detox smoothie, before opting for the fruit and cereal breakfast (I duck the Full Irish) followed by black coffee and one of those irresistible Lisbon classic pastries, Pastel de Belem.

Mercifully, a few calories are burned off when a bracing stroll follows along a section of the Via Algarviana, just an hour’s drive inland and one of the region’s great rambling routes, stretching 300 kilometres through rolling mountain scenery linking Alcoutim with Cabo de Sao Vicente.

My guide is the bubbly Catia Graca, who owns the Tia Bia restaurant, a very popular and authentic local place at the heart of the one-horse village of Barranco do Velho (population: 30, it translates to the ‘Hill of the Old Men’, apparently named when the youngsters – and the women – all left for the bright lights of Faro!). 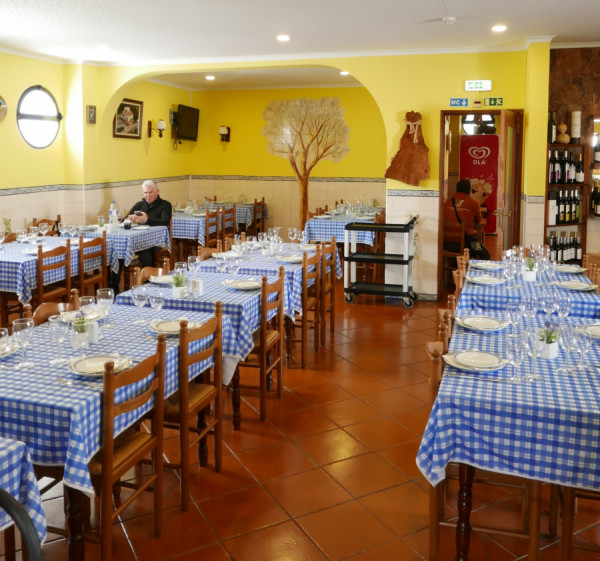 Catia, who once worked for a Cork-born owner of an Irish bar on the coast, regales me with tales of the millions of euros once made from harvesting the cork forests that dotted the hillsides (before a devastating 2002 blaze) and of the marauding wild boar, which are hunted at night and often find their way into her dishes.

Later, she pours me a large glass of medronho, the fiery 48 proof spirit her family distils from the so-called strawberry tree fruit in a former stable in the village. It burns like poteen and, as she explains: “After the first one, you don’t feel the second one.” (Drink sparingly, as It’s also a heady € 22.50 for a 70cl bottle). 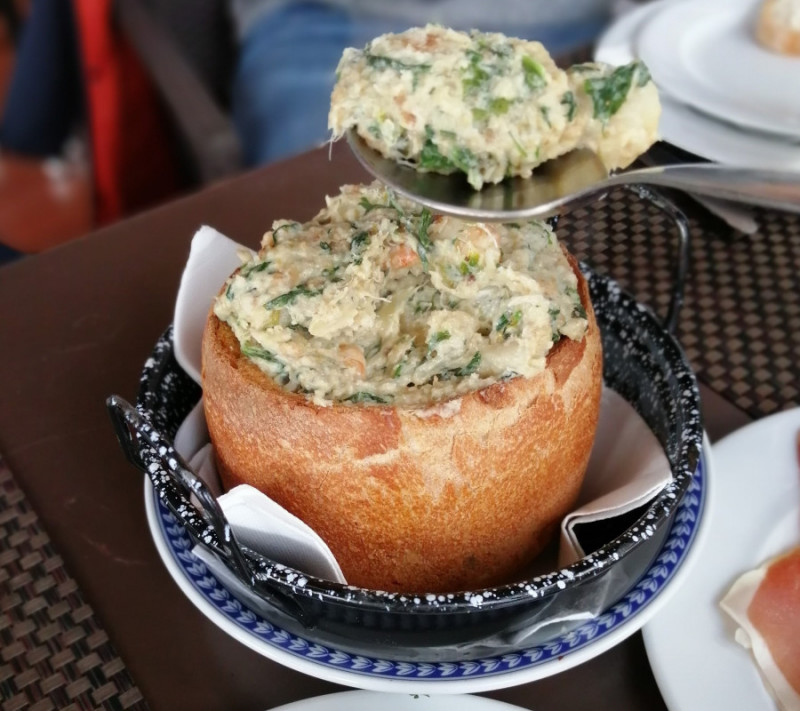 Her chef husband’s food proves equally intoxicating, from the deer and plum stew to the roast kid, oven-baked black pork cheek and the signature Migas, a hand-made bread ball stuffed with a sauce of garlic, coriander, prawns and cod. No wonder as many as 200 farmers, families and tourists turn up for lunch most days.

Next day, on Joana Martin’s specialist food tour of cosmopolitan capital, Faro, it’s clear that markets are at the heart of Algarve life, not just for their culinary delights, but also for their must-have gossip and sense of belonging.

To confirm that, I pass through the main market hall entrance, where clusters of local people are gawping, sombrely, at the latest death notices, while inside the Snack Bar da Xica, lawyers, doctors, teachers, fishermen and the customary old men in flat caps and cardigans are all clumped in confidential whispering knots, as they sup strong coffee alongside glasses filled with barrel wine or local liquor whilst tucking into bifana sandwiches packed with pork, marinated in garlic and wine. 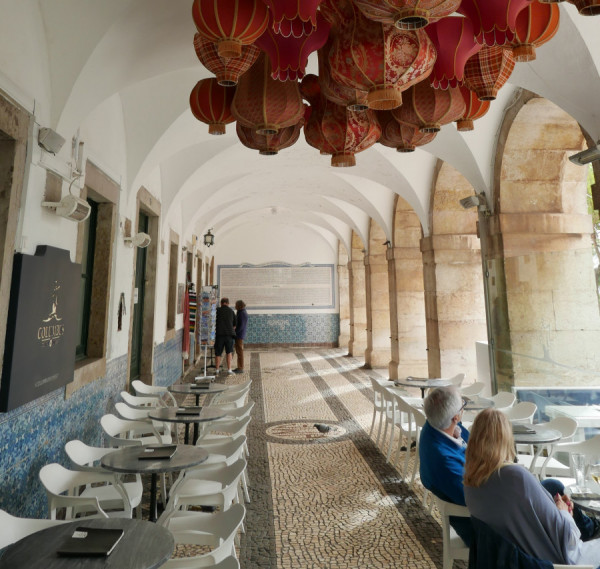 I’m certainly hungry by the time I reach the market restaurant, O Palhacinho (Little Clown), where the menu boasts stacks of juicy fried fish as well as such delights as pork with prawns. Instead, it’s recommended that I try Acorda, the staple national dish that even Portuguese pre-schoolers gobble down in the morning.

Oh dear, it becomes my only food ‘low’ of the trip. Perhaps it’s me, but I have some difficulty facing a bowl filled with salty broth in which I detect poached egg, boiled hake, garlic, olive oil and, the coup de grace, soggy white bread. It makes my father’s ‘magic racehorse potion’ seem almost inviting.

My tummy is rumbling as Joanna conducts a whirlwind tour of Faro’s cobbled lanes, grand churches and quiet harbour, before arriving at the former impoverished fishermen’s district of Riverside, where hipster gentrification means curated coffee and cocktail bars galore. 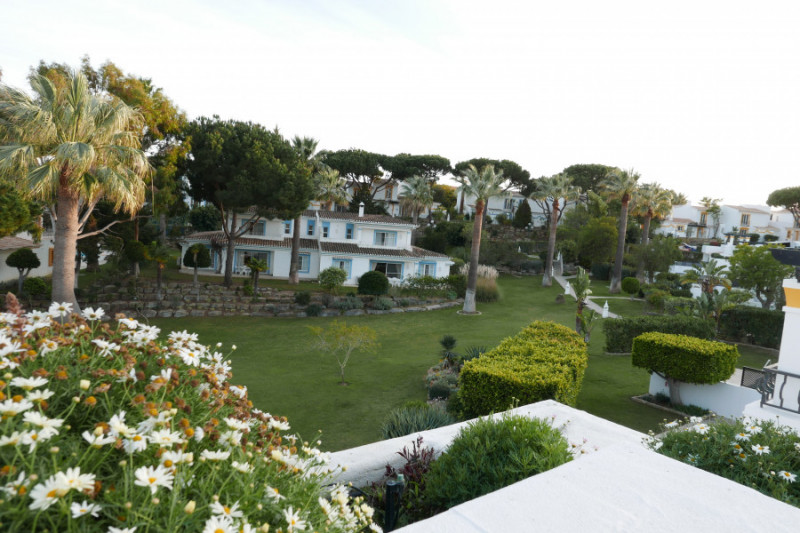 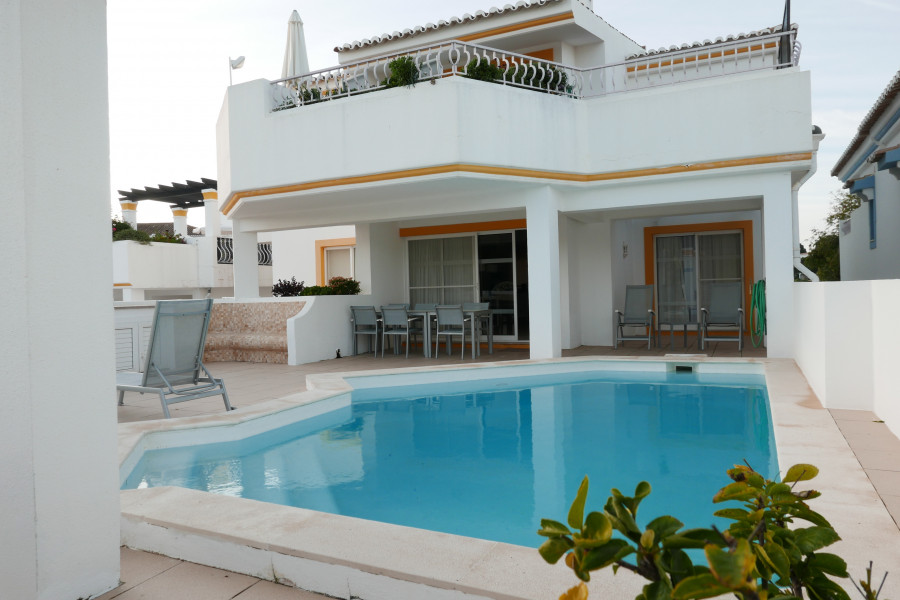 Back at the Fairways, a hot shower removes the dust of the day after which I hit one of the villa’s poolside sunbeds to enjoy a glass of local garage winemaker, Joao do O’s  Negra Mole Rose 1918, a fresh and slightly sweet affair made from one of the region’s oldest grape varieties.

Next up is a stroll to the resort’s Amara restaurant for an insightful wine-tasting session by in-house sommelier Miguel Reis followed by that sumptuous four-course meal that brings my trip to a close. 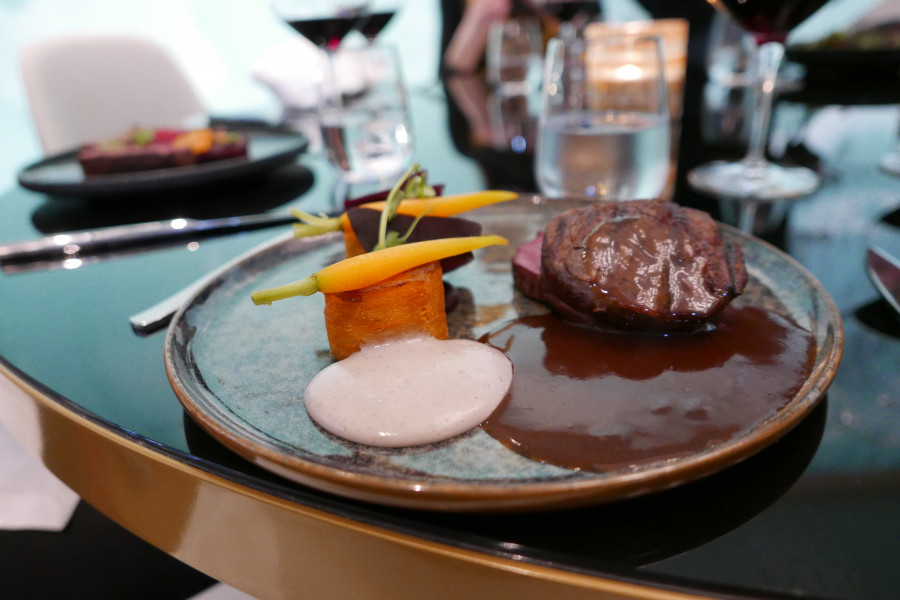 Little wonder that I decline the in-flight stodge on next morning’s plane home – although I do consider checking the nearest Weight Watchers meeting. .but then give that idea up as I’m beyond all help. (What the heck.).

Tell Me More About Eating out on the Algarve

This article was prepared just before the COVID 19 crisis in Europe. At the time of writing, Portugal remains on the UK government’s list of countries from which visitors have to quarantine on their return. Portugal has taken a lead in Europe in reopening its tourism with a wide range of pandemic safety regulations in place. In fact, the Four Seasons Fairways resort opened its doors to locals in June and visitors from some other countries followed. It remains to be seen when the UK restrictions will be lifted for Portugal, but we hope you have enjoyed reading about the experience of a visit there.

7 nights at the resort, starts from €1,200 (c £1,045) for a 2 bedroom villa (sleeps 6) with choice of pool or jacuzzi and access to the main clubhouse, restaurants and facilities. Flights (when available) from London and many UK airports to Faro started at £69 return earlier this year. Book a 5-hour market and Fisherman’s food tour at €89 per person. Go to Visit Algarve for more information on the destination.

Four Seasons Fairways fine-dining restaurant  Amara has a great value four-course chef’s tasting menu at €38/£34.38. The resort’s wine workshops, costing €25/£22.62, by sommelier Miguel Reis, are a fun and informative introduction to Algarve and other wines. The clubhouse Vivo restaurant is popular for breakfast and dinner and also does delivery to villas (mains from €11.50/£10.40).

The municipal market in Faro has further genuine local food like the wine and garlic marinated pork sandwich, Bifana, (€2.25/£2.04) at Snack Bar da Xica. Nearby, try O Palhacinho (tel +351 289 824 980) for plenty of local recipes of seafood and meat dishes, as well as coffee and cakes. Maybe not the Acorda for me, though, when I pop in next! 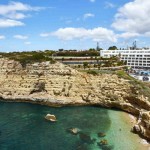