Sitting out on the decking of The Laapa Restaurant with a glass of decent red, as a herd of giraffes, back lit by the sunset, elegantly strolled past was almost too good. If I didn’t know better, I would have said the whole thing was stage managed, such is the genius of a night glamping at Livingstone Lodge.
This is a true safari experience make no mistake; something to whet your appetite for the real thing, but without having to fork out the air fare first. 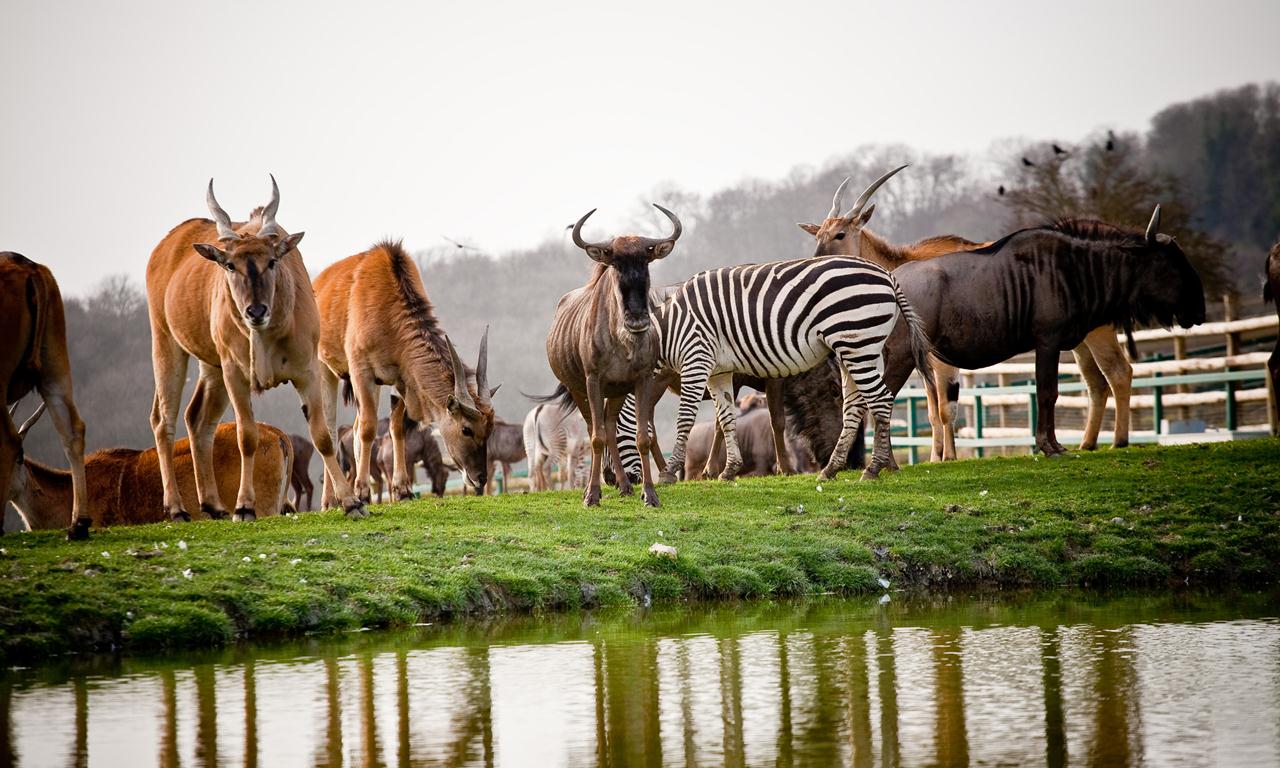 Livingstone Lodge is an exclusive part of the huge Aspinall wild animal reserve in Port Lympne Kent, where for many years the Foundation at Lympne and its other wildlife park Howletts has successfully led breeding projects on rare and endangered species and released them back into the wild. Species such as black rhino, silverback gorillas, Rothschild giraffes and Przewalski horses to name but a few.
Some are in specially constructed enclosures, but many others are free to roam the generous prairies, and in true safari tradition, you’ll never really know what you’ll encounter when you go “in country” so to speak. 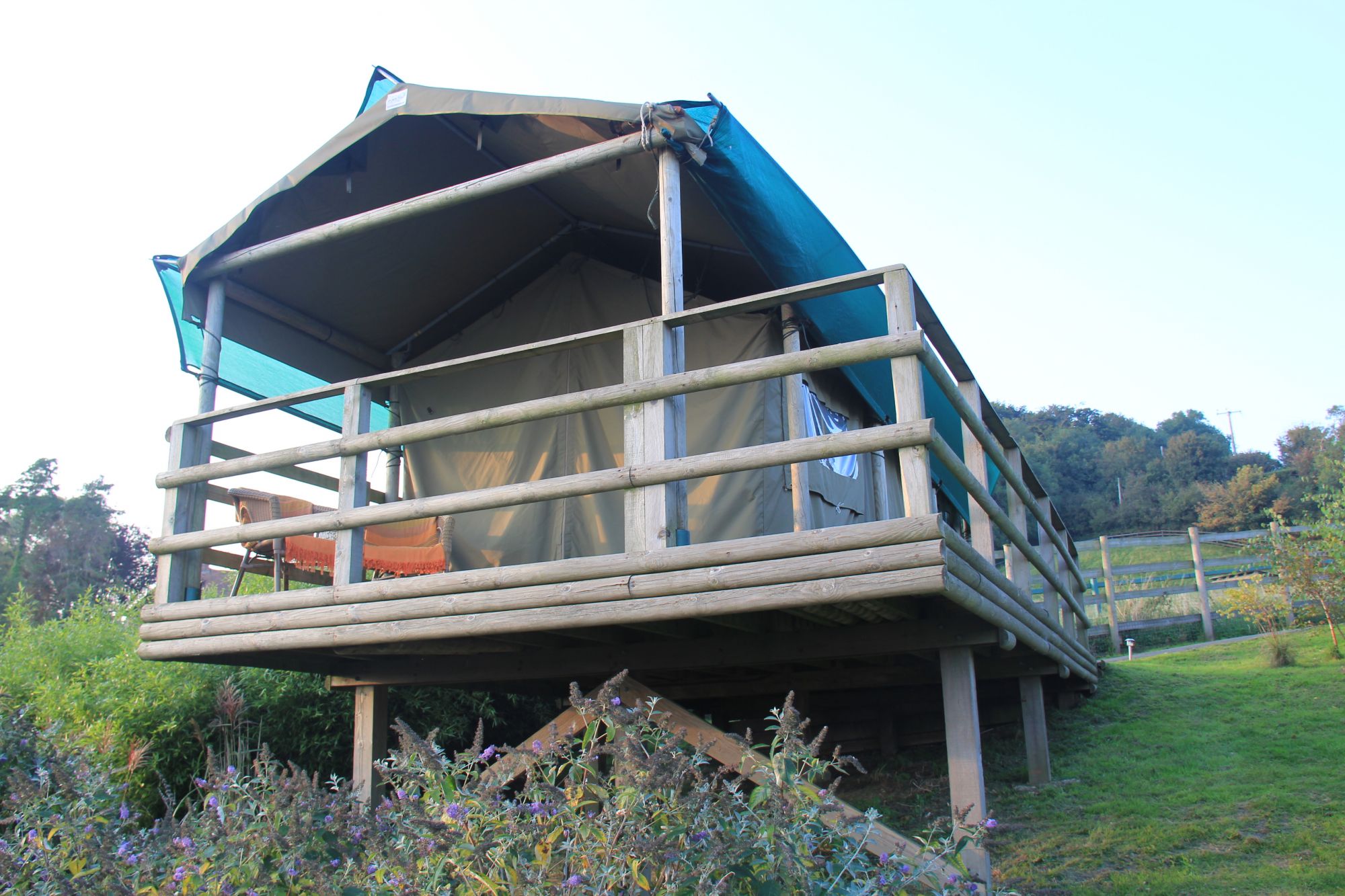 The Livingstone Lodge experience begins when you check in at 4pm to a drinks reception where you’ll meet the rest of your overnight safari companions over a glass or two of South African bubbly. With our bags taken care of by a willing ranger who’ll drop them at our tent, we board the truck for a two hour guided safari over to the tented village of Livingstone Lodge. You’ll get to be reunited with most of the animals you encounter on the safari tour a little later at the Lodge, where, drawn by the refreshing water hole near the tents, they gather at dusk and early morning to have drink or in the case of the pair of black rhino we saw, have a dip and a wallow. 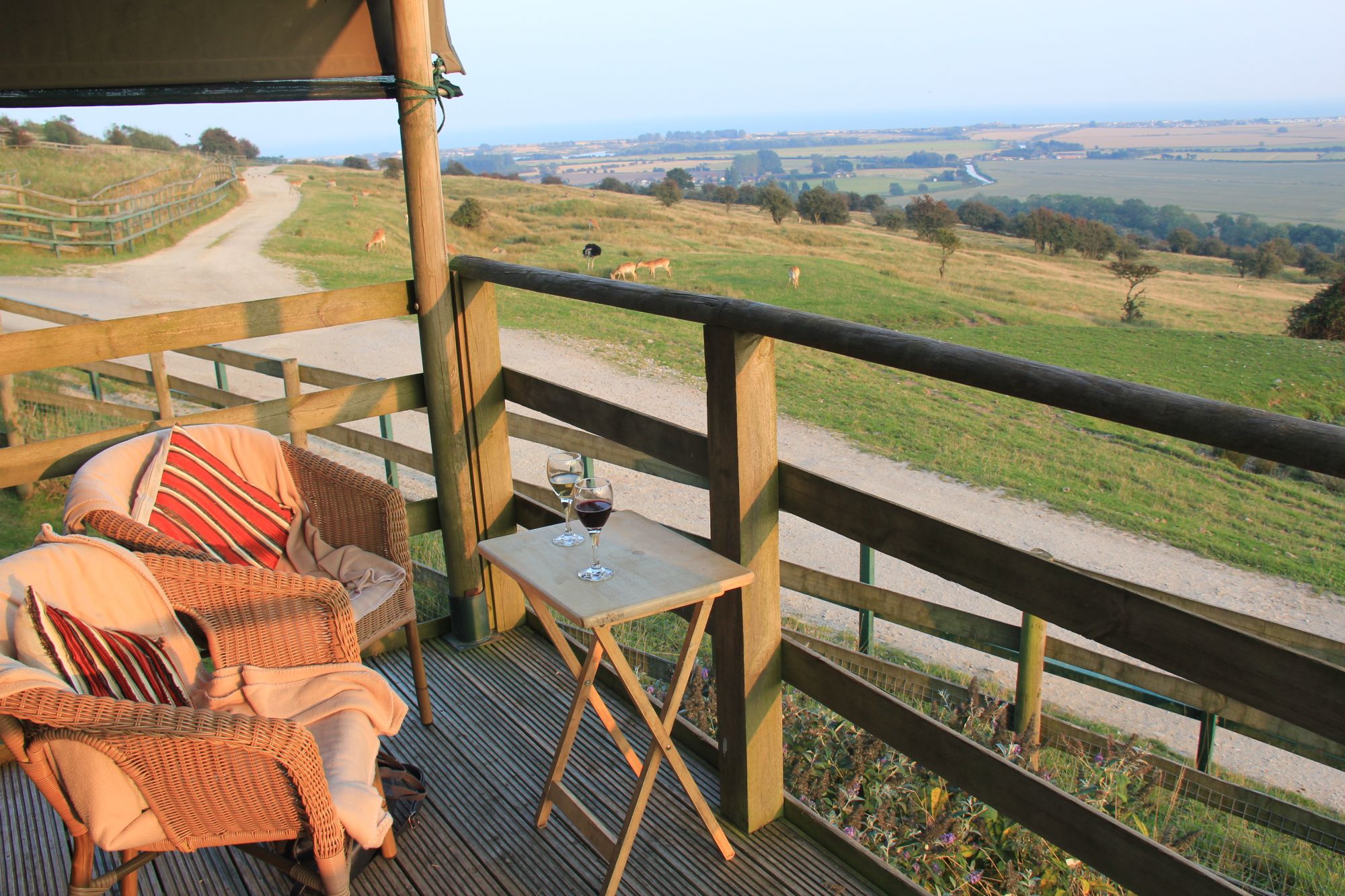 It turned out these two were a couple now, having been recently introduced, and hopes were high they might find parenthood quite appealing. All terribly exciting and potentially great news for the rhino breeding programme.
Ranger Tim had the opportunity to run through his full repertoire of animal behaviour on our journey in, from the Eastern Bongo Antelope, to water buffalo even those pesky black capped capuchin monkeys got in on the act.
The Lodge itself comprises ten luxury South African safari tents on a bluff overlooking a natural water hole. Each one has its own private decking space where you can sit comfortably and just enjoy the passing wildlife. The tents themselves have fluffy towels and robes, fresh linen on twin beds (although ours was one of two with four poster/sleigh doubles), electricity and heating if needed. The only slight concern I had was the shared male and female washing facilities only had two showers and toilets each to serve all ten tents, but in reality it worked out fine. 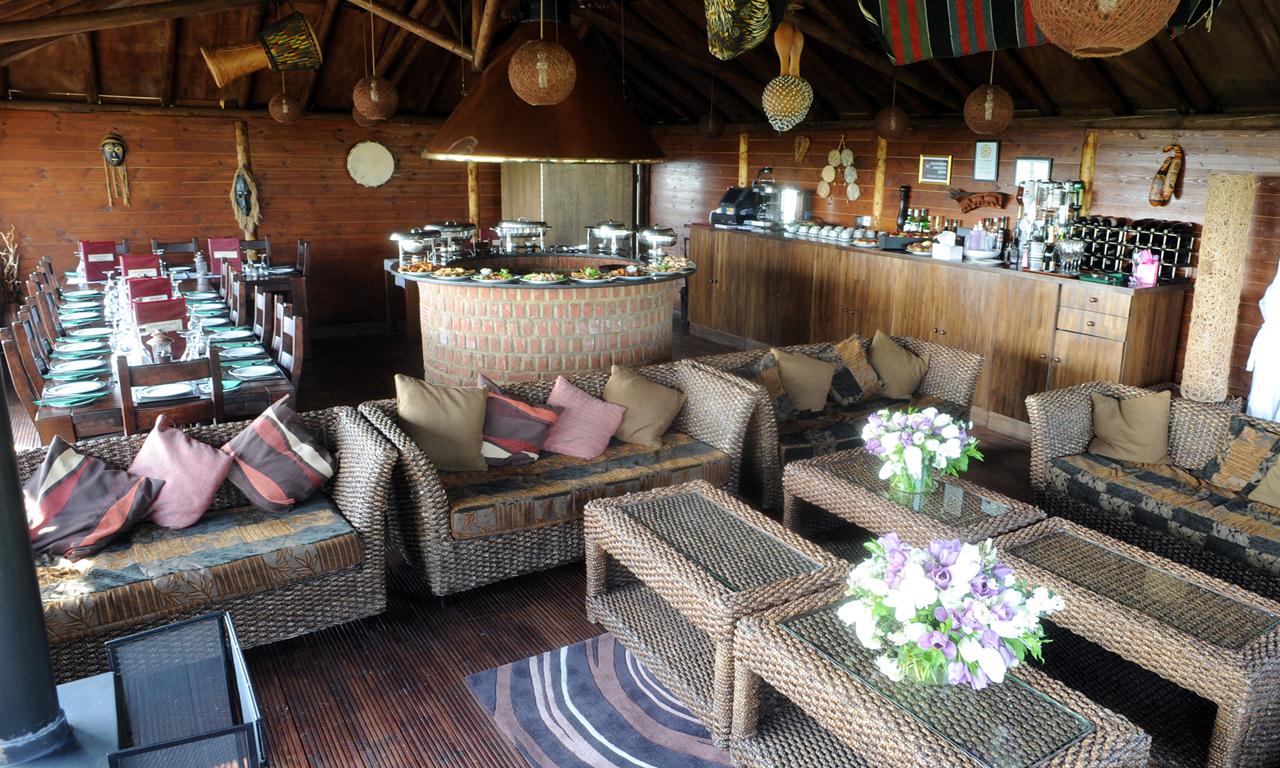 We all met for a communal five course African style buffet dinner in The Laapa a rustic African themed restaurant complete with an open fire pit for grilling those amazing South African sausages and steaks and a generous selection of other dishes including vegetarian options too. Wines flowed freely (not included in the booking price) and by10pm we were all the best of mates.
That night, as I settled down under the covers of our four poster, I heard a lion roar a distance away (thankfully not roaming free I might add) and answered by a trio of nocturnal beasts. Perhaps there was a whole choir of sounds that night, but I wasn’t awake to hear them. 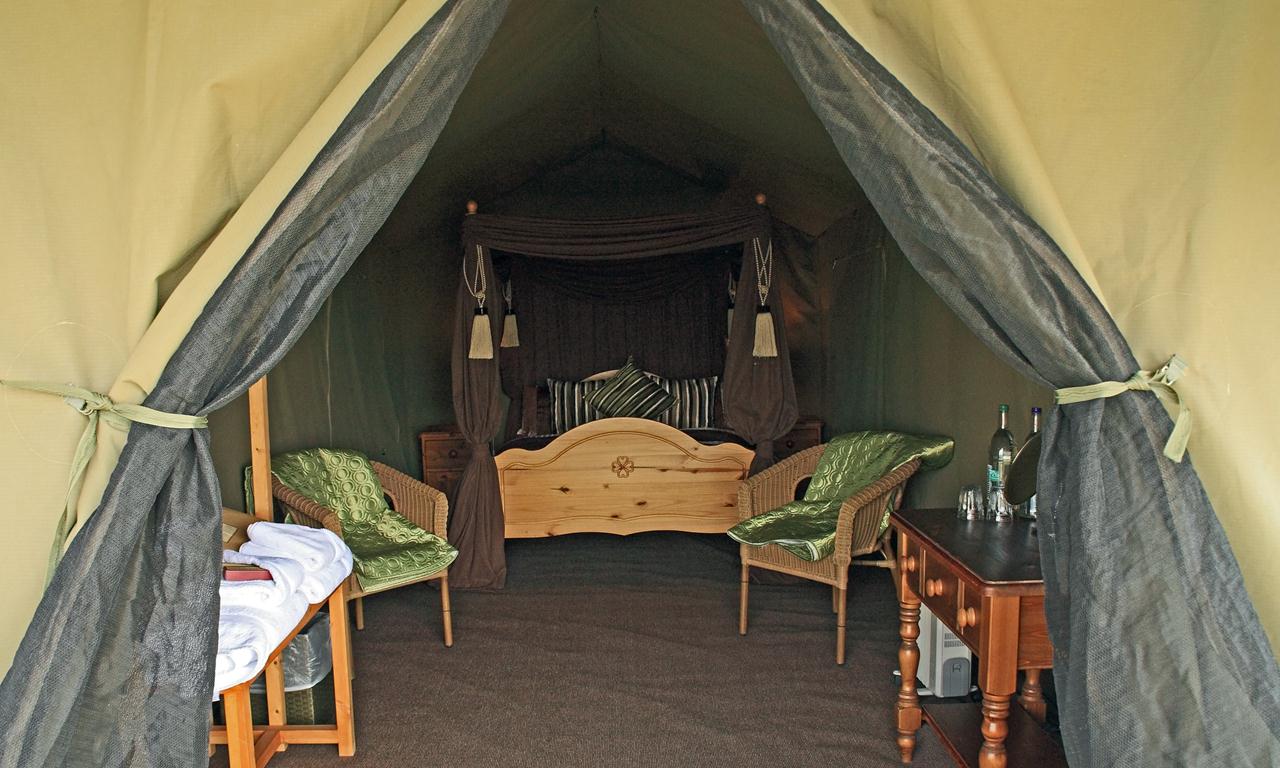 Dawn broke before I knew it, the early morning sun waking us early (well you do that out in the bush) and opening our tent flap we were greeted with a glorious sight; a whole bevy of beasts out for an early morning drink. From our perch up on the bluff the view really could have been Africa, save for the expanse of English Channel lying on the Kent horizon.
After a generous buffet breakfast back in The Laapa at 7.30 we were picked up once again for a different safari route back to base, sharing our collective stories of our experiences together under canvas. 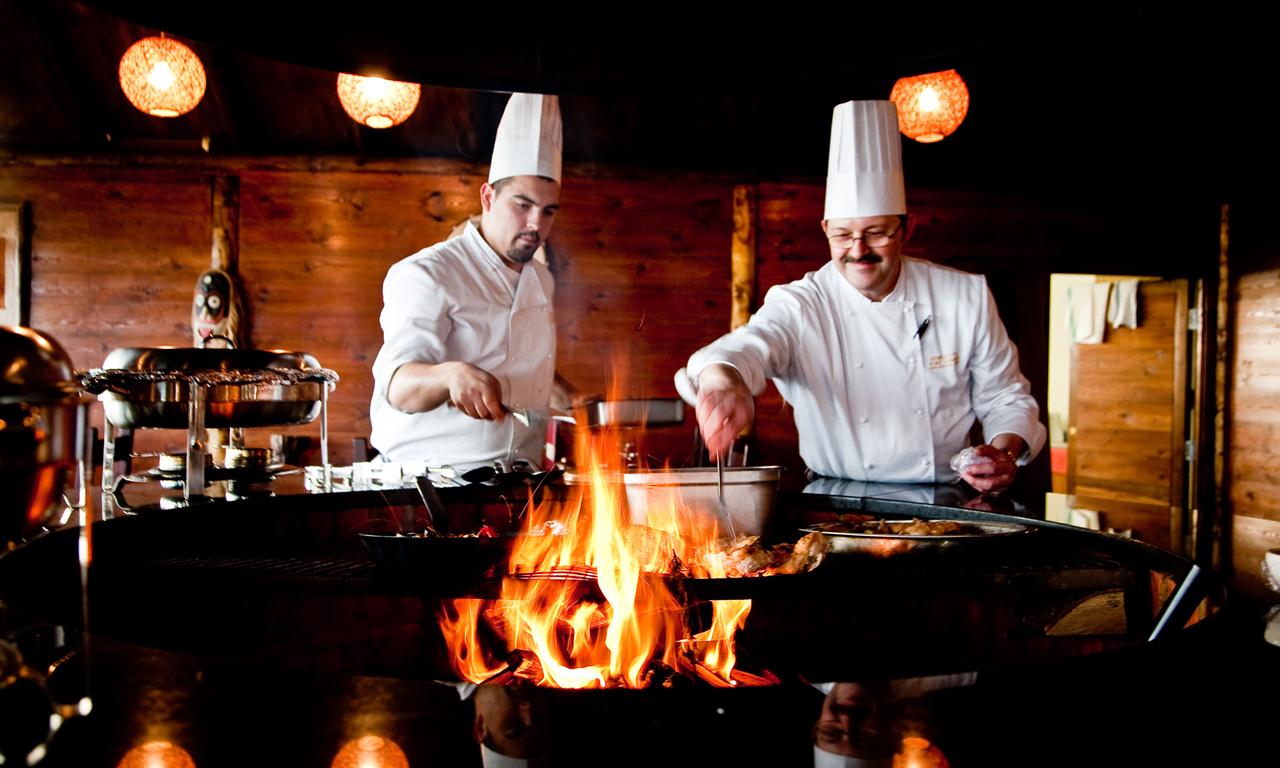 The Livingstone Lodge experience is pure genius. A genuine African introductory safari adventure that’s unique in the UK. The Aspinall Foundation has a number of different wildlife experiences on offer too, from guided picnics out in the bush, to week long family tented holidays. The beautiful new boutique hotel is now open at the Mansion, the former home of Philip Sassoon, or you can rent a cottage right next to Livingstone Lodge for up to eight people if you don’t fancy the canvas.
The best thing of all is you also get to wander around the public areas of the wildlife park with admission included in the package.
For me though it was back to those sunset giraffes and another glass of red. Well why not, they call it a sun-downer after all.

I want to stay at Livingstone Lodge. How much is it?

Prices for a night at Livingstone Lodge including welcome reception drinks, two safaris, 5 course dinner, overnight luxury tented accommodation and breakfast from £140 per person depending on time of the year. Only open between April and October.
livingingstone lodge 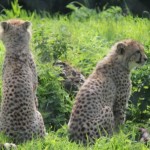 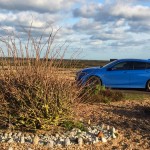