Standing on the terrace of Il Salviatino, a stunning 16th century  palazzo in the hills above Florence, you might be forgiven you’ve died and gone to heaven.

Considering Florence is one of the most visited cities in the world, up here you feel like you own it. Solitude. 11 acres of grounds. The huge terrace overlooking the unmistakeable visage of the ancient Duomo rising up from the spread of Florence below my feet. It’s all a little bit special.

Il Salviatino is a five star masterpiece in every sense. Her style and elegance from a time gone by fully restored in a labour of love by the owner; a perfect balance between authentic renaissance and modern luxury with each of the 45 bedrooms uniquely different from the next. 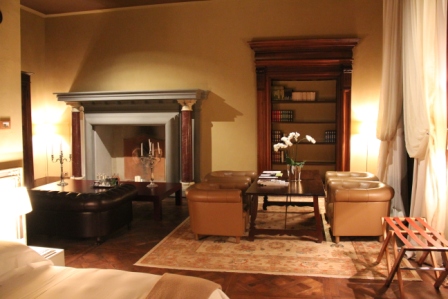 My room for example, distinctly high end nobleman, the dark wood paneling straight out of a Doge’s Palace. The vintage tub sitting quietly in the corner of the room, the huge windows looking out at a vast private terrace (shared with next door admittedly but nevertheless something to boast about) the forest behind providing all the sounds of countryside. I even had a small mezzanine floor with a couple of comfortable couches. Then again, there was the state of the art in here too. A large flat screen TV inside a mirror. Yes inside the mirror. A portable keypad that controlled all the lights (and there are many) air con of course and a Nespresso machine for steaming espresso on tap.

Once the home of one of the wealthiest families in Florence, their symbols of power, are once again proudly on show; the delightful Italian garden, the frescoes, the marble and the hand stitched Italian leather headboards. All restored to pristine condition. 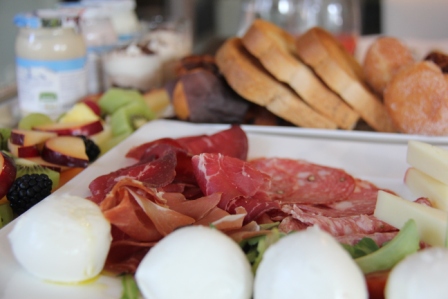 The restaurant is in one of the original greenhouses, the irony not lost, as fresh ingredients supply the artful Italian cuisine on offer. Breakfast is made to order and supplemented by a mini buffet delivered to my table, a bounteous mix of fruits, pastries, hams, breads and cheeses.

The spa sits almost as an afterthought, next to the infinity pool close to the main building,  but yet overflows with every therapy known to man and staffed by fully trained therapists who are part of the staff team and not thankfully outsourced to a third party.

After a day uncovering the beauty of Florence, the free shuttle awaits to take me back to my hillside oasis where I am once again firmly under Il Salviatino’s spell.

This is a luxury hotel in every sense of the word. Sheer elegance.

De Luxe rooms start from €300 per room per night in low season and from €450 in high season. 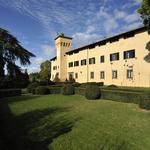 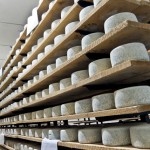