Palma loves a rooftop bar. The enduringly cool city has scores of sky-high hangouts to order a drink, pull up a chair, and gaze out over the minarets, the palms, and the hazy Med. And if you catch sight of the mighty Le Seu cathedral – all ablaze under a copper sun- well, you’ve struck gold. Crowning the unassuming façade of INNSiDE Palma Center, the rooftop is another lofty addition to the city’s bar scene, where guests loll about on loungers and dangle their feet into its plunge pool by day, before lazing around with balloon glasses of G&T as languid afternoons morph into hip nights.

It’s sceney without the pretension, playful and fun without it being a drunkfest. And this was exactly the scene I was seeking after a day stalking the pavements of Palma and crowding the city’s playgrounds with my two excitable toddlers. Whilst my husband soothed them to sleep on our first night, I crept up the stairs to this skyward bar, to stare at the twinkling city, just beginning to fire up the first sparks of its legendary late-night antics. 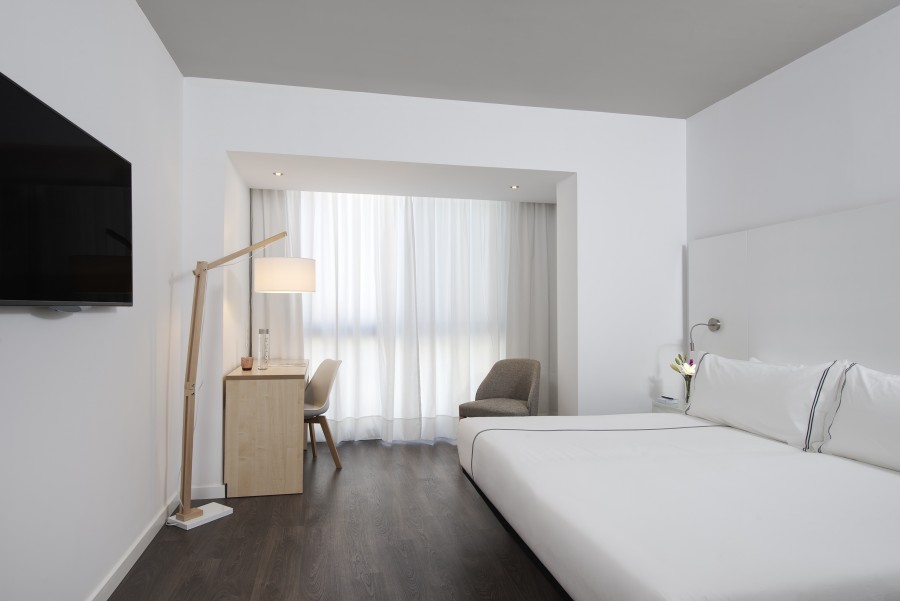 Roused the following morning by my four-year-old fondly stroking my ear, it dawned on me the four of us had slept in the same room completely undisturbed. Whether it was the supremely squishy beds or the black-out curtains, I had no idea, but the fact we all slept soundly for a good 10 hours gives kudos to the hotel’s comfort and design. Inside, our all-room white was pared back and uncluttered. It made clever use of all the space, and what I thought was the door to a wardrobe, turned out to be the loo, sitting beside the sort of rain shower you can’t quite bring yourself to get out of. It’s slick and minimalist, and even when on arrival, we were missing the travel cot for my two-year-old, the receptionist was full of apologies and sourced one within minutes. 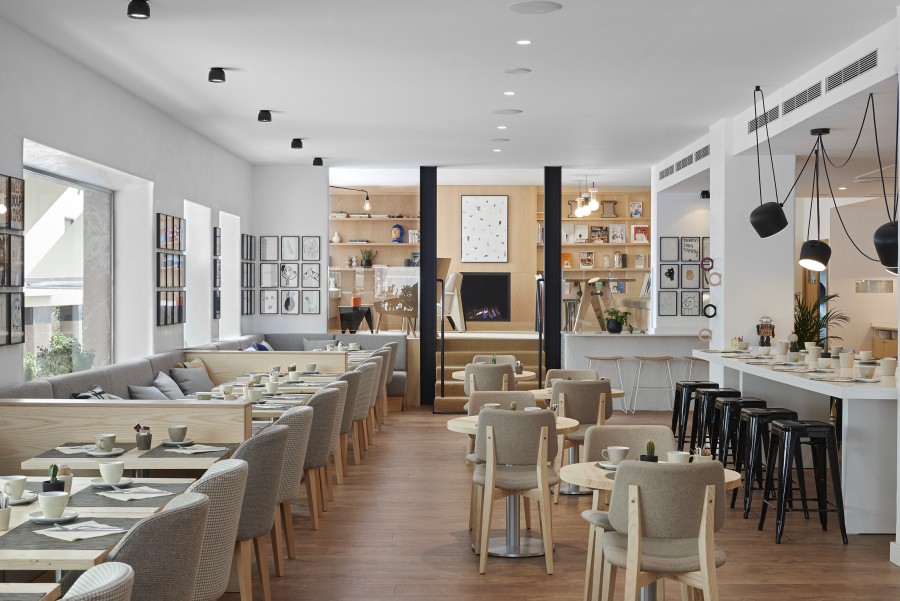 All the rooms frame a central atrium in which leftfield arty sculptures have been installed and pop into view as you whizz down the glass-walled lift to breakfast. Talking of art, the hotel’s lobby-cum-eating space is bright and white with arty collages plastering the walls and design-conscious pieces of furniture. It’s Nordic cool: with rattan baskets of palms, clusters of cacti, lots of natural woods, white tiles and swinging pendant lamps. It’s all very instaworthy and just as I was snapping away at an ecru and black cushion I liked the look of, my two boys had pegged it over to the food and were trying to pour OJ into tiny glasses. A member of staff swept in, and warmly ushered them to our table with crayons and paper. That’s another thing about the hotel – the staff are consistently empathetic with freewheeling children. Hallelujah.

The breakfast is buffet-style – but there are details of elevation. There were superb flaky pastries, which the kids hoovered up with sticky jams; freshly cut watermelon, mango and berries; perfectly cooked fried eggs; and piles of serrano I scooped over crusty French bread. Perching on the bar stools and clustered around the tables, was a mixed bunch of clientele – starry-eyed couples, groups of forty-something women and business-types beavering over laptops amid the rich roasty scent of coffee swirling around the place.

One morning we gathered our swimming gear and headed below ground to its mini pool and hot tub. Given its spot in the basement, I’m not sure everyone is clued up to its existence, and as we pushed open the doors, a wave of relief came over me  – the place was empty, leaving the boys to bomb and launch themselves in the water without a sneer from onlookers. Meanwhile, I broke free for five and lay down in the steam room – again, blissfully alone, just the shrieks and hawks from the boys as they enthusiastically ducked in and out of the pool with their dad. 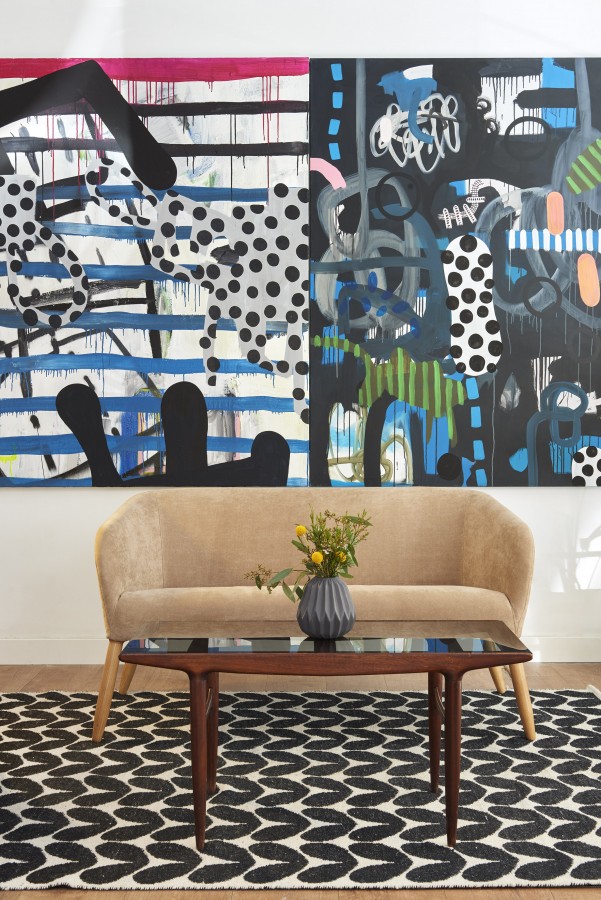 Location-wise, the hotel is hitting the high notes too. Just around the corner is La Rambla – the pretty stretch winding via Place del Mercat to the Passeig del Born, lorded over by grandiose buildings with peeling shutters. Plaza Espana, with its bus station and major shops fanning out from the square, is a few minutes’ walk away. And in the opposite direction, there’s the up-and-coming Blanquerna – a strip with hipster cafes, restaurants, and a knockout ice-cream joint where locals hover around chairs licking cones and sipping icy drinks. Walk all the way along here and you’ll arrive at Mercado Gastronómico San Juan – an abattoir-turned-thrumming food hall, where diners perch on high stools and mooch around the stalls framing the space – selling everything from Thai curries to just-caught seafood. You could wind up here for a grab-and-perch bite; but it’s just the sort of place you hunker down for one and end up staying for hours to try the excellent wine poured from the kitchens. 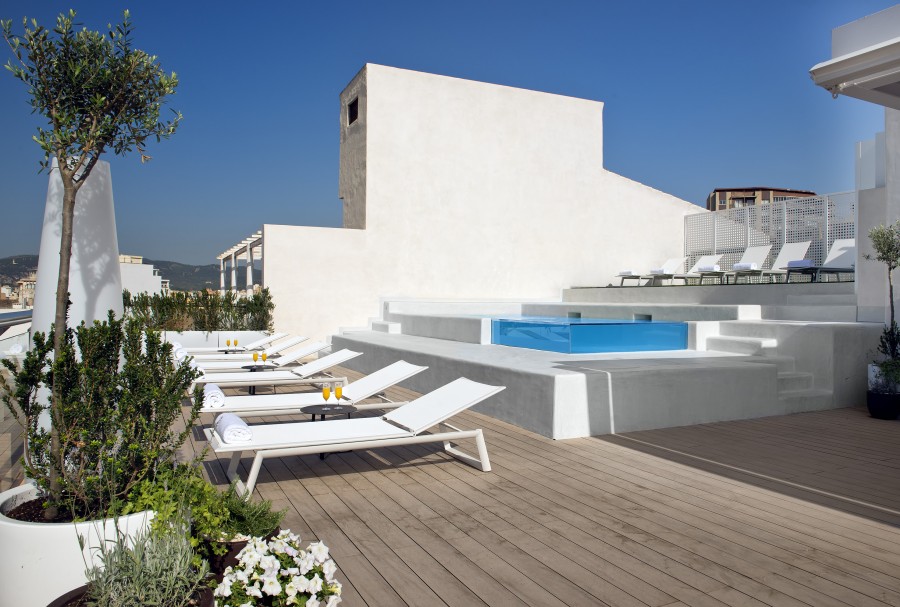 INNSiDE Palma Center is grown-up without being snooty, playful without being too cool. And with rooms from around £150 – it’s superbly priced. Take a date, take your mates, or take the kids – it’s a place that attracts a whole bunch of people with a refined breakfast, top-notch location and cosy rooms. The real find though is that rooftop bar. 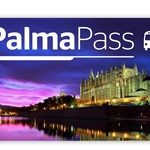 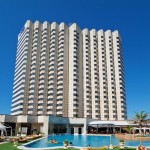