With all eyes on Hollywood this year thanks to the magnificent new Academy Museum of Motion Pictures, it’s good to know of a warm, safe and friendly perch in the heart of Tinseltown.   In fact, it’s hard to imagine a friendlier welcome than the one you’ll find at Mama Shelter LA anywhere else in the city.

Warm, safe and friendly are what you want in Hollywood, where so many dreams have been sought and hearts broken.   A century after the silver screen came to life here, the iconic neighbourhood remains the centre of Los Angeles tourist action, albeit with the edge it shares with vibrant neighbourhoods across the globe, eg London’s Soho, Paris’s Pigalle and Amsterdam’s Red Light District, all best enjoyed from a good address. 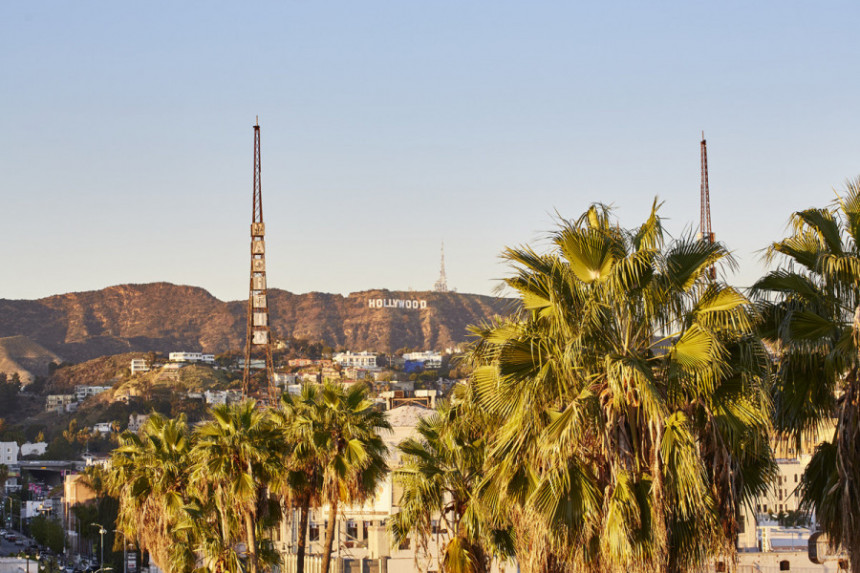 That Mama is the choice of many European visitors reflects its heritage – born in France in 2008, the brand has weathered financial crisis and pandemic alike.   The Hollywood outpost opened in 2013 with a mission statement “to create a space that brings together all those rhinestone cowboys and Sunset Strip rockers, paint-splattered artists…and dancehall deejays who come to Los Angeles to figure things out, meditate in the sunlight…and at the end of the night come home to Mama.”

It’s a family affair in more than name; the hotels are the creation of a co-founder of Club Med who runs them with his two sons.  We were received by an out-there-looking but thoroughly professional alumnus of the original Paris property as fluent in English as his native tongue and whisked up to our bedroom overlooking the Hollywood sign as fun as it was functional.   A hand-written, personalised welcome message scrawled on a mirrored wall set the tone along with a neon cactus and Spiderman and Iron Man masks substituting for shades over the bedside lights flanking the king-size bed.  State of the art internet and big-screen TV are standard, and a wooden chaise-longue and a huge arched floor lamp with an oversized lemon-sherbet shade were unusual pieces which worked as home comforts. 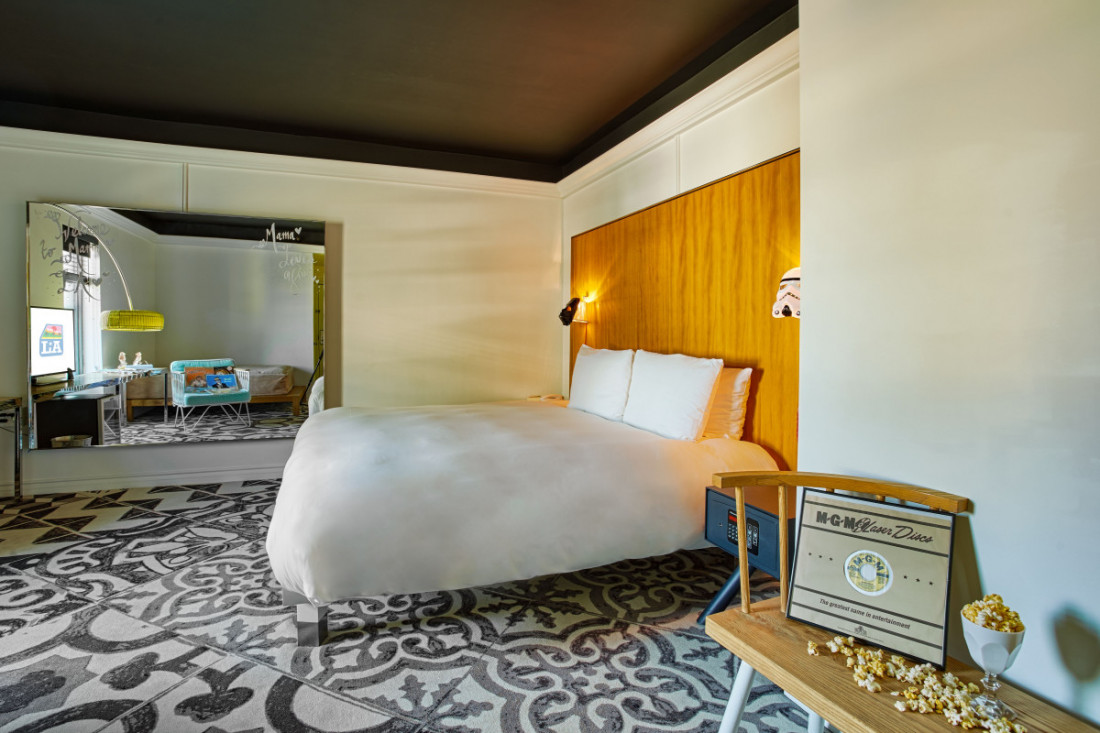 The bright white subway-tiled bathroom was both functional and stylish, tenets for a brand which declares design to be at its heart, but Mama Shelter LA is also about its public areas and has evolved into a dining,.drinking and socialising destination for locals as well as guests. Apple butterscotch French toast set the tone for a hearty American breakfast in the coffee shop, where dinner fare is elegant, international and eclectic, running the gamut from native smoked short ribs to the Veneto favourite vitello tonnata.   While music in the large adjacent bar, equipped with table football, is loud, sound adjustments mean it’s possible to hear and converse with tablemates over dinner, the surrounding buzz notwithstanding. 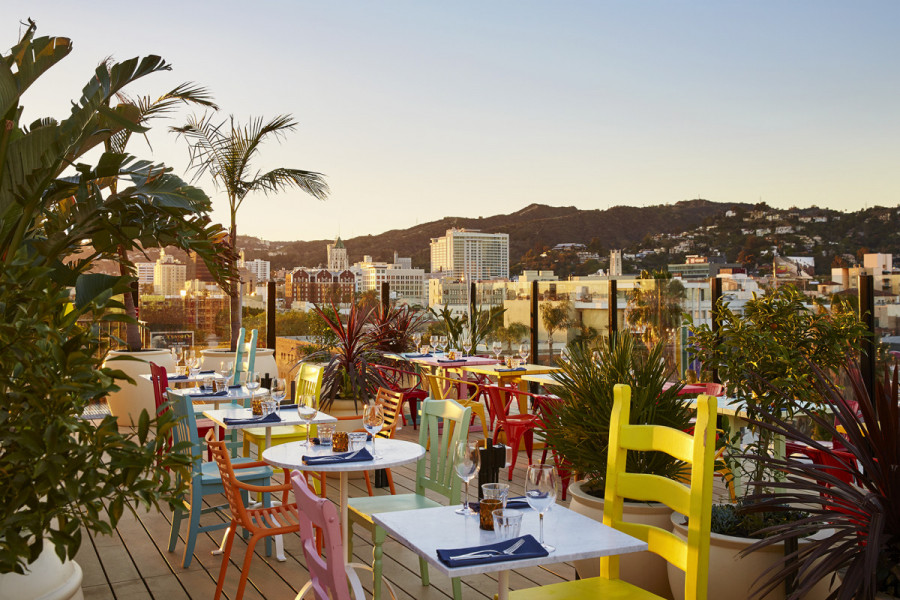 While the rooftop bar furnished with pastel-coloured tables and chairs seems a great place to kick off the evening, that’s easier said than done – tables are reserved for bar-food diners, and the only snippy service we encountered was from a barman with attitude who was smartly rebuked by management for causing upset.  Hotel guests do get priority access to the rooftop for an after-dinner digestif, and it’s worth riding the lift to take in the Hollywood skyline view, not to mention admiring the Coen Brothers script into which Mama has been inserted as a fictional character lining the elevator walls. 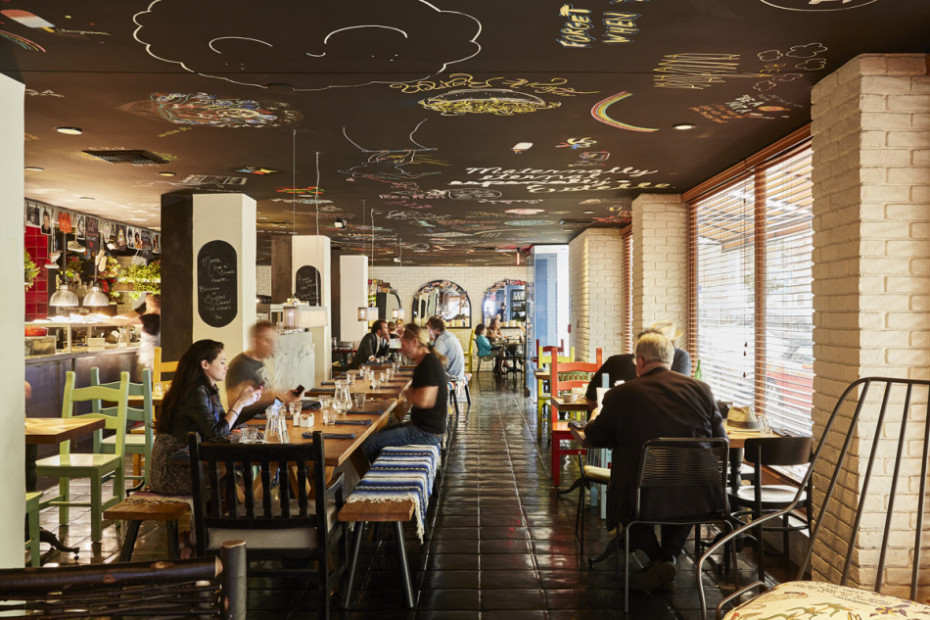 Do leave your hire car in the affordable public parking lot opposite, and stroll up to Hollywood Boulevard to take in its main landmarks on foot – the Chinese Theatre, a fabulously decorated premiere venue of cinema’s golden age still showing movies and hosting celebrity hand and foot prints,  the circular Capitol Records building and the Cinerama dome rather shockingly destined for demolition(the modern outdoor mall at Hollywood & Highland notable for its own startling architecture is likely to succeed it as an iconic boulevard highlight).

How Do I Get To Mama Shelter?

British Airways Holidays offers fly-drives to LA from £749 per person,

Read up on Hollywood at VisitCalifornia 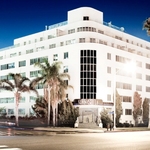 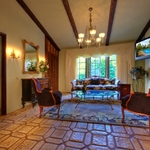 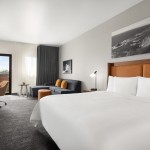