24/09/2013This entry was posted in England, Europe and Middle East, Manchester, United Kingdom and tagged City break in Manchester, Guide to Manchester on 24 September 2013 by Anthea Gerrie.

Barely a decade ago, the idea of a city break in Manchester would have seemed laughable to southerners.

Warm and friendly? Certainly, as those who have visited friends and family in the city of the Red Devils and Sky Blues will testify. A great dining, shopping and clubbing destination?  Yes, to those in the know.    But the message is still getting out to southerners who find a Virgin train can whisk them to Britain’s newest centre of cool in  a whisper over two hours flat.

It has taken a huge investment in culture and infrastructure over the past 10 years to make Manchester (or, rightly speaking, Manchester and Salford, the adjacent city which has at least half the good stuff) the prime tourist destination it is today.

Alight at Piccadilly station and shoppers’ shuttles await to whisk visitors to the highlights.    At the bottle of the hill sleek trams take visitors further afield, to Old Trafford and the wonders of Salford, which include the futuristic Lowry Centre and Daniel Liebeskind’s Imperial War Museum North.  But actually, you can walk to virtually all of Manchester’s highlights – they include the Art Gallery,  Royal Exchange, People’s History Museum, Albert Square, Chinese Art Centre and Millennium Quarter – thanks to a compact city centre which has been beautifully cleaned up and partly pedestrianised. 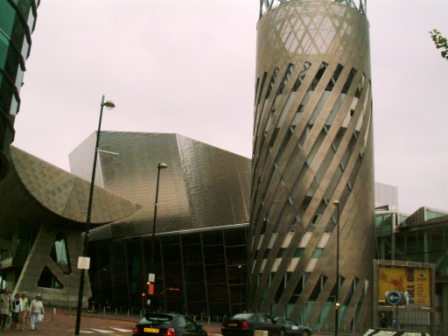 A tram to Harbour City to view the amazing building, celebrating its 10-year anniversary, is de rigueur, particularly for art lovers, who will find a comprehensive retrospective of Salford’s most famous native artist, L.S. Lowry, and his much-loved stick people, as well as changing contemporary exhibitions.

It would be remiss to leave this fascinating area – all bridges, water and innovative high-rise architecture  – without visiting the Imperial War Museum North. 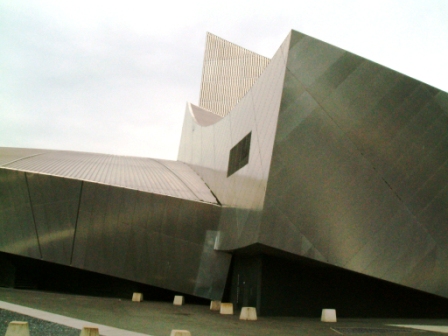 Arguably the stuff on the outside is as good as the excellent exhibits inside – not just Liebeskind’s typically disorienting architecture, but highly unexpected photographs of wartime Tyneside by Cecil Beaton, displayed in huge five-metre frames on the quayside outside the museum.

Salford, which will quite likely overtake Manchester as a media hub now the BBC has arrived en masse, has made one more great contribution to the Greater Manchester conurbation in a five-star hotel which set new standards of contemporary stylishness in Manchester. The Lowry (not to be confused with the Lowry Centre) is served by the  shuttle bus, and is close to Deansgate, the main upmarket shopping thoroughfare. Those who don’t stay, but have a fine palate and deep pockets, will enjoy dining at the RiverBar and Restaurant, with wonderful waterside views and simply superb cooking; imagine the best Dover sole you have ever eaten, a perfect follow-on from smoked salmon and anchovy butter terrine.

Food is also the raison d’être of Manchester’s newest design hotel, the more affordable ABode Manchester, just a minute’s walk from Piccadilly Station. Here, the two-Michelin-starred Michael Caines has turned the former basement nightclub into a stylish restaurant, also with pretty faultless food. Opposite ABode sits one of the nicest Malmaisons in Britain, and there are plenty of stylish hotel choices in town.  They include the Hilton and Radisson skyscrapers as well as the august Midland, now home to another multi-Michelin-starred chef, Simon Rogan’s, new reincarnation of the French Room.

This last is one of the few Victorian buildings not to have been given a fabulous spring-clean, like the once-grimy Town Hall, now a gleaming golden fixture on Albert Square. One of the glories of Manchester is its architecture – beautiful old industrial buildings sitting side by side with thrusting new structures of steel and glass. The Radisson, for example, sits on the site of an old goods depot, currently being redeveloped as a leisure and shopping complex, and the whole site has been enriched with a fountain-lined piazza, one of many which now dot the city. 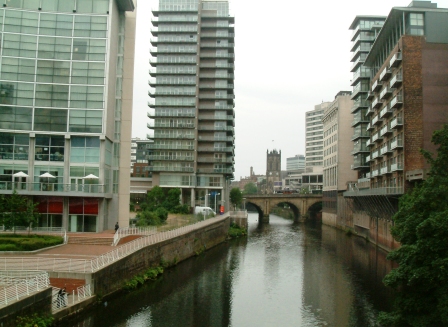 Shoppers should not miss New Cathedral Street, which has risen from the ashes of the bombed-out Arndale Centre to create a new pedestrianised street for fashionistas; here are Burberry, Louis Vuitton, Reiss, Zara and a gleaming branch of Harvey Nichols; opposite is the Triangle Centre, with smaller, less pricey shops, and between the two sits one of Manchester’s oldest medieval buildings. This Millennium Quarter, as it’s now known, showcases the planners’ talent in raising the town where cotton was once king from the doldrums with ambitious and engaging projects.

A word must be saved for a pair of unprepossessing, pretty well un-redeveloped areas which nevertheless house the city’s most eclectic shops, cafes and clubs. One is the student quarter stretching down Oxford Street from St. Peter’s Square. Get a bus to put you off at the Whitworth Gallery, yet another excellent free exhibition space specialising in art and design and currently showing artists’ wallpapers. It also has a pleasant cafe for coffee or a quick lunch.

To reach the Northern Quarter, get to the huge central piazza and transport hub known as Piccadilly Gardens, and walk down Oldham Street, off the side of Debenhams. Then allow yourself to get lost in the many entrancingly distressed side roads – Church Street, High Street, Tib Street, Turner Street, Hilton Street and more – which are punctuated with fabulously quirky boutiques and places to graze and take a load off.

Of these, my favourite is Oklahoma, an organic cafe with an enticing and eclectic little homewares shop. Following lunch here with a browse round the vintage jewellery at Rags to Bitches, the elegant and covetable hand-made bags at A Few Fine Things and the designerware hidden below street level at Renegade Marmalade, before drinks and perhaps supper at the Market Cafe opposite the old fish market would make a pretty perfect p.m. What to do with the man?  Easy – send him to Blue Vinyl or the Vans shop, one of only five of this eclectic American shoe emporia in the country and proof, if anyone needed it, that Manchester has truly arrived on the design scene. 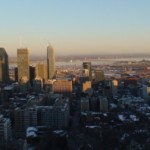 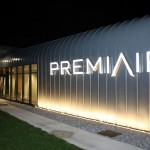 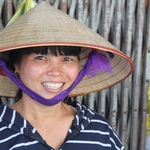