A lone polar bear plods towards us. He’s one of a thousand or so bears populating the western shore of the Hudson Bay in Manitoba, Canada.

He lumbers close enough for me to observe individual hairs on the thick fur insulating his chest and powerful legs being ruffled by the brisk subarctic wind.

We’re walking on the tundra 60 kilometres north of Churchill, the small town that’s nicknamed ‘the polar bear capital of the world’. We’re staying at the Seal River Heritage Centre, one of the National Geographic Unique Lodges of the World, and out with two of the lodge’s guides. 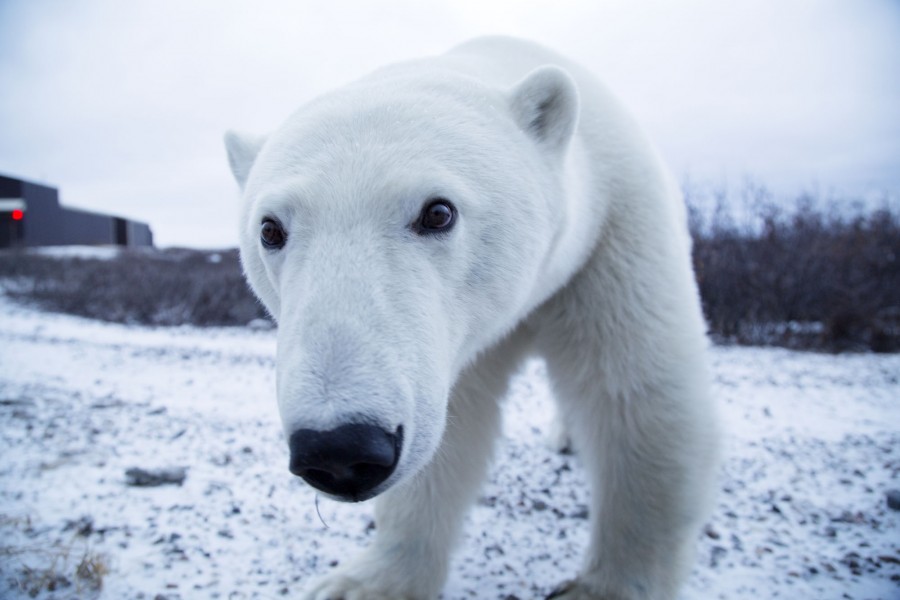 Polar bears are the planet’s largest land-dwelling carnivores and under 20 metres of open ground now separates us. Derek, a bear expert and the guide to the 12-strong group that I’m part of, has already estimated that the creature plodding towards us weighs more than 400 kilograms. He’s hungry too. It’s been months since the bear last ate. The animal is here — close to where the Seal River empties into the Hudson Bay — waiting for the seawater to freeze so he can head out onto the ice to hunt seals, his favourite source of nourishment.

“We can’t manage bears but we can manage what we do as a group,” commented Derek a couple of days ago, during the orientation session as my group arrived at Seal River Heritage Lodge. During autumn it’s a popular destination among photographers seeking opportunities to observe and photograph wild polar bears on the treeless flatland of the Canadian tundra. By huddling together and collectively looking large Derek explained that we can discourage polar bears from approaching too closely. Like penguins that are part of a wind-buffeted colony on distant Antarctica, we’re employing that strategy now. Onwards, though, trudges the bear.

“Not every bear wants to eat you,” said Derek on our first day at the lodge. I recall that sentence with clarity as my heart pounds fast and loud. Really? I begin to wonder. “They’ll do everything to avoid conflict,” he told us. In the extreme cold of northern Manitoba even seemingly innocuous injuries can sap a bear’s energy and have potentially deadly consequences. Instinctively, they eschew risk.

During our orientation, Derek disclosed his step-by-step strategy for discouraging bears from coming too close. First, he talks to them. That’s normally enough to warn off even a large male. This wilderness is a place of quietude — there’s no growl of engines or honking of horns in traffic — and human voices carry. The only sounds are natural; the blustering of wind, the flapping and whistle of the sparse, straw-like grass beyond the kelp-lined beach and — providing it’s not too cold — the lapping of waves on the shoreline. “That’s close enough, buddy,” he says firmly to the bear, which is now less than 15 metres away. 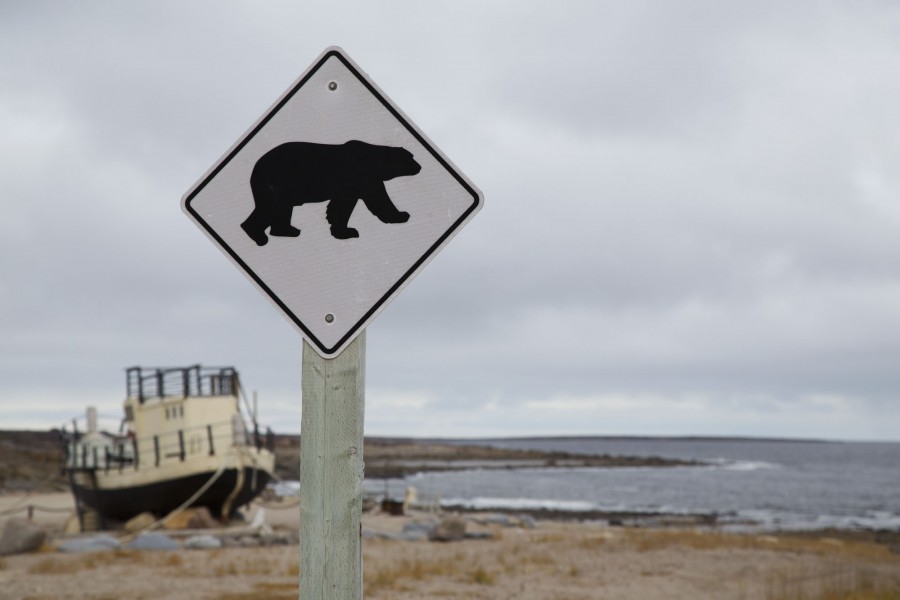 In the pockets of his hooded parka Derek carries bangers and an air horn hangs from his belt. If those don’t work and the bear comes to within eight to 10 metres of us he can spray a capsaicin-rich aerosol — basically a strong pepper spray — that will irritate the animal’s mucus membrane and deter it from approaching closer. Should that fail he has a cap gun and, across his shoulders, a shotgun. Thankfully he’s never fired that weapon in all his years as a guide. Before reaching for any of those options he pulls two stones, the size of hens’ eggs, from his breast pocket and clacks them together sharply. The bear shoots us a quizzical look and seems to shake his head in defiance. “That’s close enough,” reiterates our guide authoritatively. Once again, he smacks the stones together. 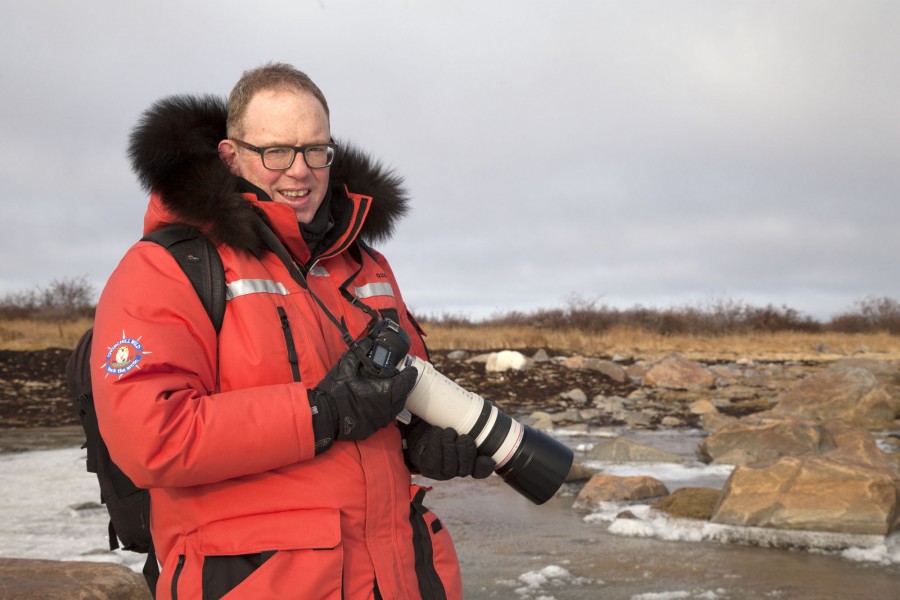 Nonchalantly, the polar bear veers left. We get to see his powerful side profile from unexpected proximity. “There goes the south end of a northbound bear,” comments Derek as the bear trudges into the distance before settling into springy, sun-dried kelp that was washed up by tides long before our group arrived in Manitoba.

Elated by the close encounter, members of the group begin exchanging high fives and showing photos clipped as the bear approached. “You must have got some good shots there,” utters a voice and collectively we nod inside the fur-lined hoods of our thick coats.

This region of Canada provides habitat for a sizable fraction of the world’s population of approximately 25,000 polar bears. Churchill is roughly 1,000 kilometres north of Winnipeg. The town and its environs are patrolled for polar bear incursions. Signs warn visitors to be vigilant. Vehicles parked on the streets of Churchill are kept unlocked in case pedestrians ever need to seek refuge from a bear.

“Take your corners wide” advised a local as I stroll towards Churchill’s Itsanitaq Museum, whose collection encompasses artworks and artefacts conveying aspects of centuries of daily life among the native peoples of Canada’s north. Turning a building and unexpectedly coming face-to-face with a polar bear really isn’t something I wanted to experience, despite my keen interest in wildlife. 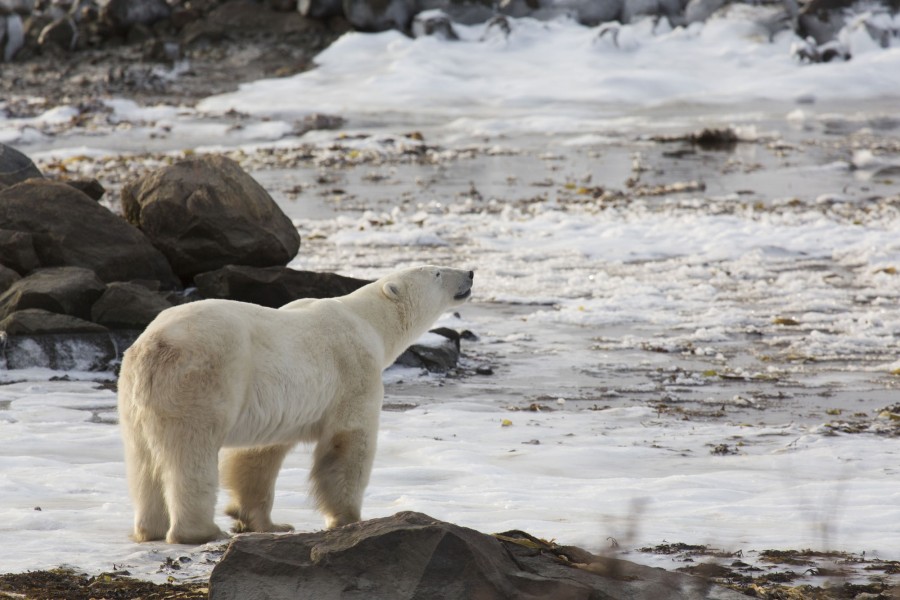 Bears that head into town usually do so seeking food. It’s easier to rummage through the dump than to hunt. Some may take an urban detour while migrating along the coastline. To discourage them from returning, Churchill has a Polar Bear Holding Facility on the edge of town. Locals know the facility as the ‘Bear Jail’ or ‘D20’, the name by which the unit was known when it was one of the now-defunct Fort Churchill’s storage buildings. The bears are released well away from human settlement after a period of detention in one of the building’s 28 holding cells.

Nearby Wapusk National Park, named after the native Cree term for ‘white bear’, is a popular denning site for the females of the western Hudson Bay polar bear community. Tours, departing from Churchill, run to the national park during February and March when cubs first emerge from the dens weighing anything from 11 to 15 kilograms. I make a note and vow to return to observe that spectacle. 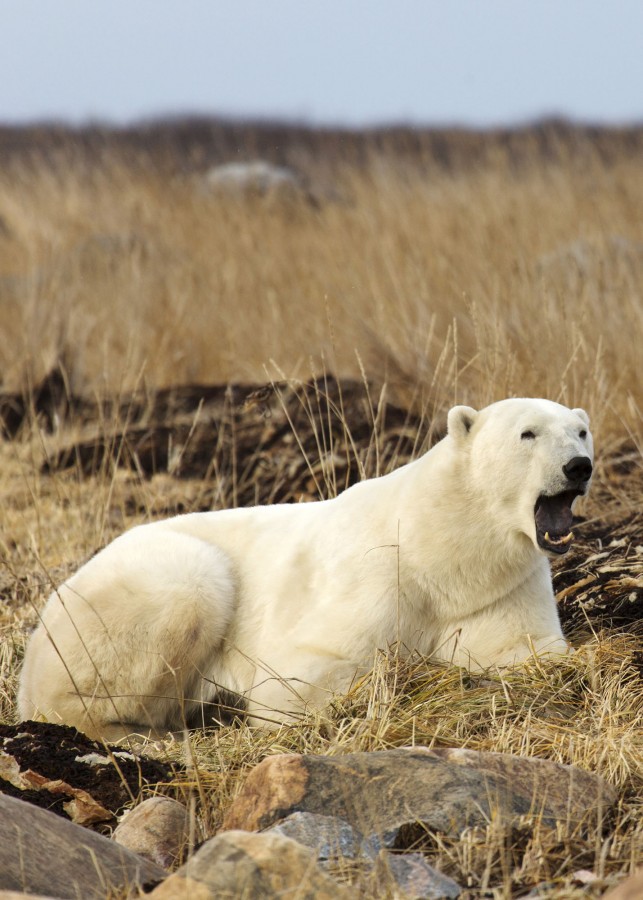 Meanwhile, I’m hopeful of seeing the Northern Lights dancing in the night sky over Churchill tonight. It’s a clear night and the combination of low light pollution and the high latitude mean the chances of seeing the Aurora Borealis are high. There’s a good probability of seeing the constellations Ursa Major (whose name means ‘Great Bear’) and Ursa Minor (meaning ‘Little Bear’). My bear spotting may not yet be over just yet.

Tell me more about Manitoba, Canada

Seal River Heritage Lodge is operated by Churchill Wild. See the Churchill Wild website for information about packages to stay at the lodge and other remote properties around Churchill.

The Travel Manitoba and Destination Canada websites have information about things to see and do in the province.

How to get to Churchill

Learning about polar bears in Churchill

The Parks Canada Visitor Centre, at Churchill’s railway station, displays information and exhibits about the life cycle of polar bears. The animals weigh around 600 grams when born and grow to several hundred times that size. The displays include an adult bear standing on its hind legs with its front limbs stretched upwards. There’s also a model recreating one of the dens, beneath the snow, to which females retreat to give birth.

One way of guaranteeing a polar bear sighting while in Manitoba is to visit Assiniboine Park Zoo in the provincial capital, Winnipeg. The Journey to Churchill, within the zoo, has enclosures recreating landscapes that can be seen in the province’s north.

Bears and seals inhabit neighbouring sections of the zoo. They can view and smell each other. The Sea Ice Passage is a tunnel providing opportunities to view polar bears swimming underwater.

The interactive interpretative hub at the Leatherdale International Polar Bear Conservation Centre, part of the Journey to Churchill, provides information about the habits and habitat of polar bears. It also conveys challenges facing the environment of the Arctic and subarctic regions of Canada. 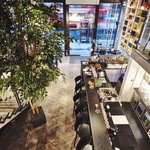 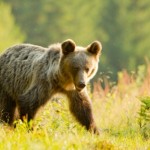