Riding the legendary Ghan from Adelaide to Darwin

Darwin’s railway station is about 20 kilometres out of town and receives only two trains a week, which must be a huge disappointment to the city’s trainspotters.

Still, it’s a massive improvement on what they had before 3 February 2004, when the inaugural journey northwards from Adelaide and Alice Springs completed the north-south rail link. That first entire journey was a momentous occasion justifying numerous dignatorial bums on seats and quite a few more mooning beside the track in welcome. 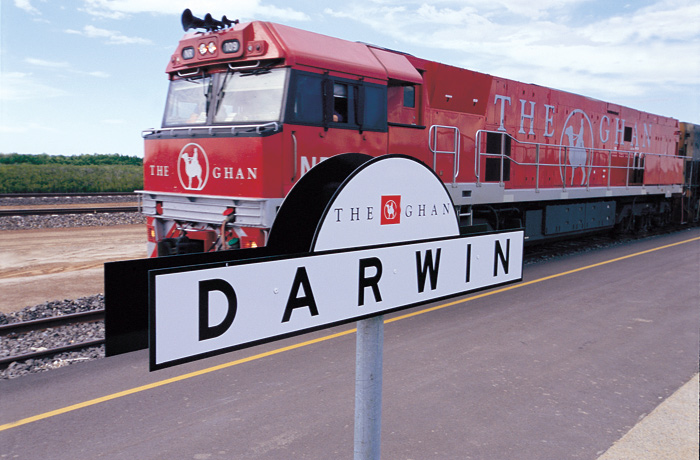 As rail journeys go this is something of an epic, 2,979 kilometres (1,861 miles) of a trek – not exactly commuting, then. In fact, this train journey is not about getting from A to B; it is a travelling experience that hints at a lost era and the elegance of classic rail travel, and one that brings you into contact with the vast hinterland of Australia at somewhat closer quarters than a Qantas Airbus 320. True, you can learn a lot about Australia from the air; its size, the vast emptiness, the unchanging, seemingly unwelcoming land, a massive red parchment networked by dusty roads that appear to lead nowhere, and the cracked lines of river courses that rarely carry water. But The Ghan offers that and much besides, not least greater immediacy and intimacy. The lush tropical vegetation of the north, the red-ochre desert of the centre, and the rolling farmland north of Adelaide are counterpoints that challenge the myth that the heart of Australia is an arid wasteland of repetitive bareness.

The original Ghan, named after the Afghan cameleers who once crossed the desert, departed Adelaide for Alice Springs on 4 August 1929, but plans to extend the line northwards were soon abandoned, air travel and the unpredictability of the weather in the tropical north saw to that. It was described, somewhat dismissively as ‘a train line from nowhere to nowhere’; but work on the northern section did begin, in April 2001, and completed ahead of schedule and under budget, the last transcontinental railway to be built anywhere in the world, a train that conquers the Never-Never, and defies the tyranny of distance. 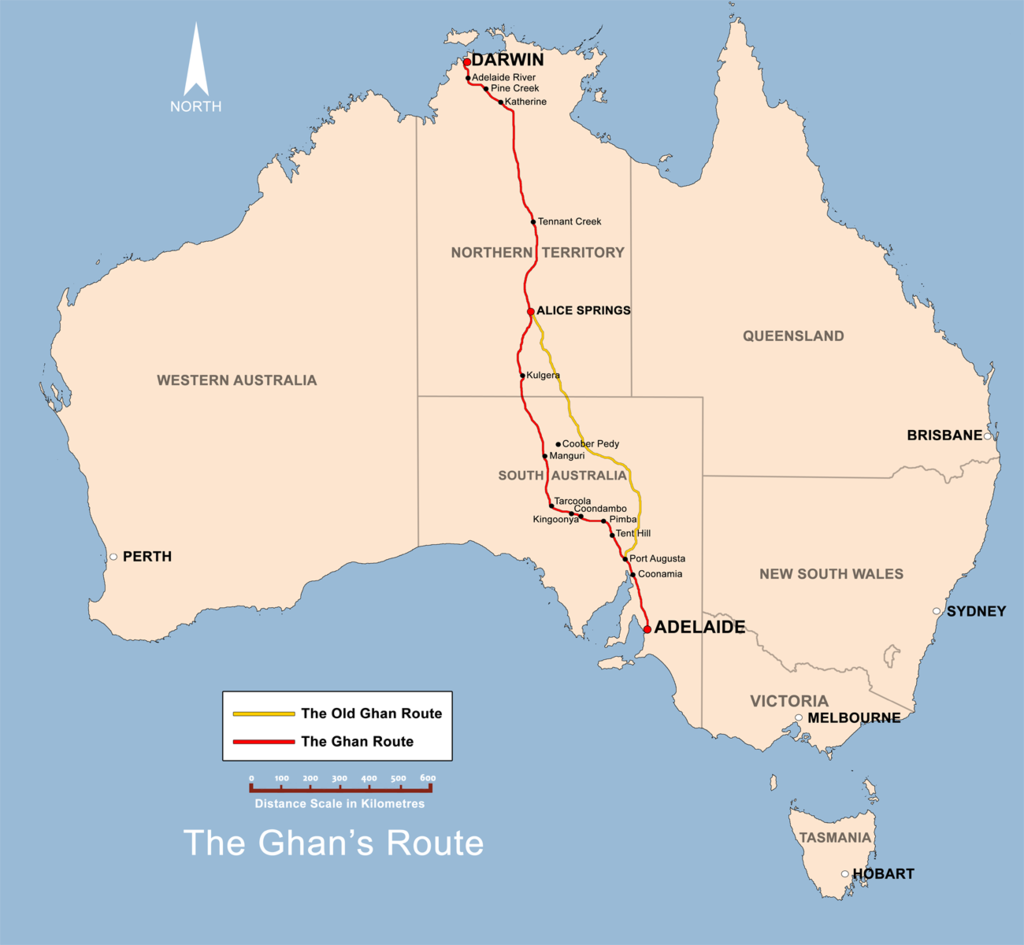 In spite of its newness, there is something delightfully ‘old-worlde’ about The Ghan: the carriages date from the art deco era of the 1950s and have those memorable ‘other time’ qualities like wood veneer, stainless steel and hand-cranked Venetian blinds, all encased in long and shiny corrugated carriages that shimmer in the setting sun. It all looks a bit tinnish and outmoded so you expect a bumpy ride, but apart from a few creaks and the odd mysterious bump in the night as the engine deals with sleeping roos on the line, it is a remarkably gentle and dignified journey. That’s the key, I suppose, it’s a dignified way to travel, something that smacks of lost elegance, refinement and courtesy.

Not so long ago, I drove from Darwin to Alice beside good lengths of the gleaming new line, so I had some idea what to expect both from the scenic and comfort points of view. But The Ghan has a happy knack of exceeding everything you could ask for, ploughing steadfastly on at a nonchalant 40-50mph, and with those small but important touches, like friendly service, a wake-up cup of tea or coffee, newspapers, magazines, on-board commentaries, and a small but prized memento in the form of a lapel pin and certificate. 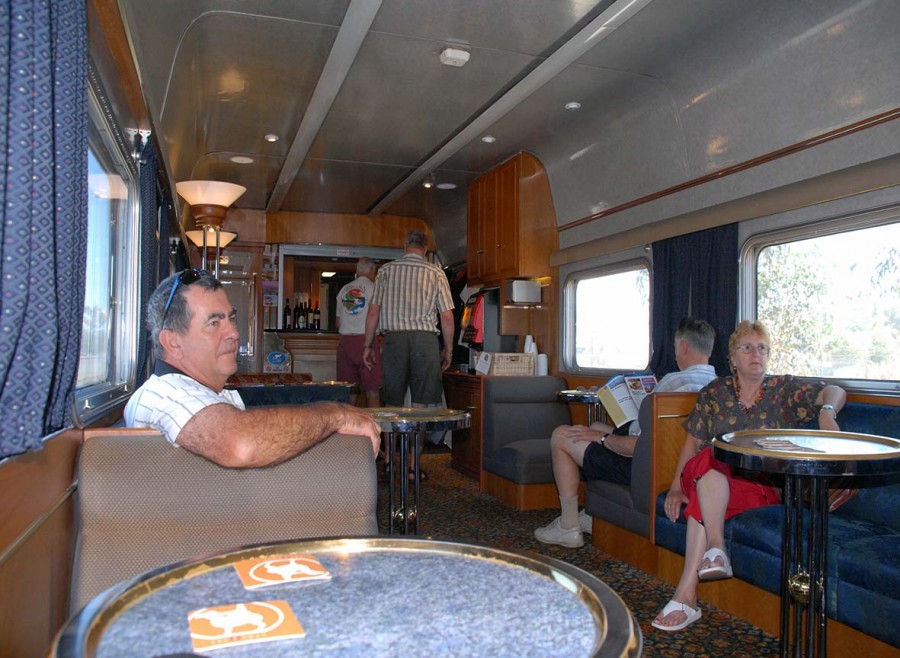 The Gold Kangaroo double cabins have their own facilities and are more than adequate and comfortable for two. The single cabin is less generous and encourages regular trips to the bar and lounge; nor does it have the use of exclusive facilities, other than a wash-hand basin. When the bed is lowered – while you’re enjoying kangaroo steak or teriyaki kingfish – available space is severely restricted. But, if you’re happy to be closeted in splendid isolation then the single cabins are a great escape and fit where they touch … sleepwalking is not an option.

The beauty of the Gold Kangaroo accommodation is the ability to shut yourself away or join in, to come and go as you please. In recent years, they have introduced an even higher standard of service, Platinum. When you travel Platinum you experience the very best The Ghan has to offer: spacious private lounge-style cabins; Premium en suite cabin with twin or double bed; panoramic views to each side; personalised cabin steward service, and much more.

Between Darwin and Katherine, where a scheduled four-hour stop allows off-train excursions, the landscape is spread with trees and shrubs – red gums, eucalypts, ghost gums, cycads – scattered homesteads and wide spreads of cathedral and magnetic termite mounds, the latter predominant in Litchfield National Park through which The Ghan slips. This is a place of raw and unrelenting beauty, and passing through it on The Ghan allows an appreciation of the austere landscape and the pioneers who heroically believed they could cross it. 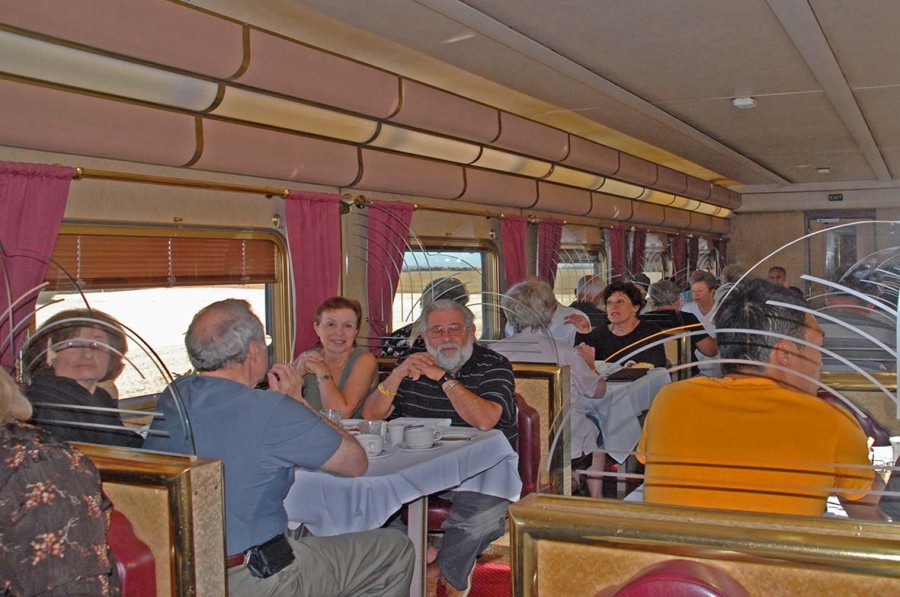 Pine Creek, 240 kilometres south of Darwin and named with typical Australian matter-of-factness because the creek there was lined with pines, brings a brief interlude of marginally more ‘civilised’ landscape, with fruit orchards flanking the track. But these belie Pine Creek’s place in history as the site of a major Northern Territory gold rush when telegraph construction workers discovered alluvial gold.

The lonely outpost of Tennant Creek and the splendour of the Devil’s Marbles are scenes passed in the night as The Ghan pushes on towards Alice Springs. Somewhere during the night we also pass the lonely outpost of Barrow Creek, an overnight halt for motorists. The Ghan staff joke that Barrow Creek is a township with a population of just eleven people, all of whom work in the local bar. Which rather begs the question that if there are only eleven people in town and they all work in the bar, who are they serving?

At Alice Springs, more off-train excursions are available, but even with only a few hours available, it’s worth opting instead to take a stroll around this remarkable outback town made famous by Neville Shute in his novel A Town like Alice. At the very heart of Australia, Alice Springs is not exactly a drop-in centre, but it has a tantalising and irresistible attraction that draws you back. 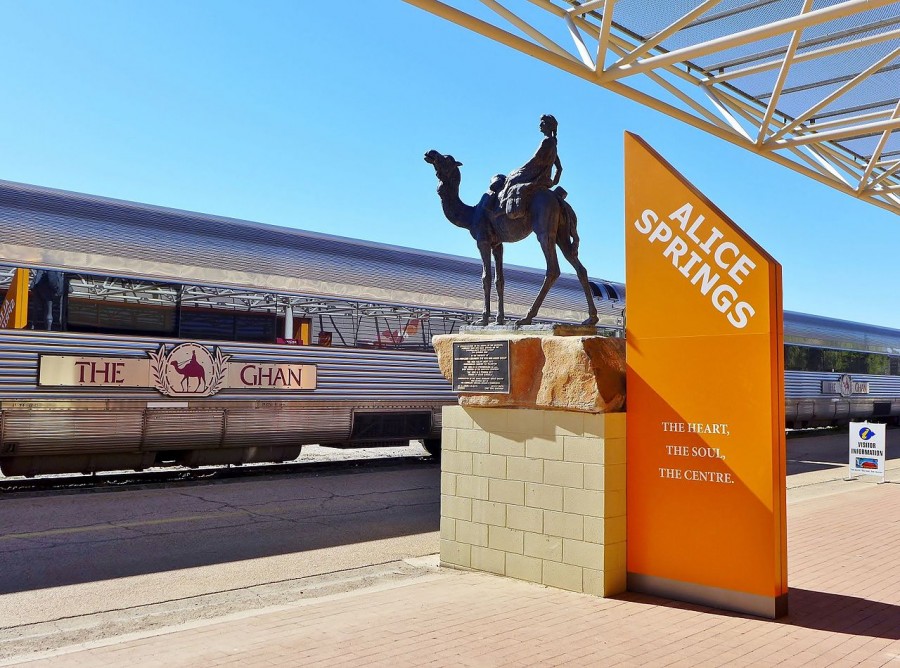 Back on board, there’s no stopping now, other than nominally until the train reaches Adelaide. On the way, we cross the invariably dry Finke River, which extends for over 1,000 kilometres from the MacDonnell Ranges in the north into Lake Eyre, and is said to be one of the oldest rivers in the world, although these days it flows for its entire length only once or twice each century. The river is a popular meeting place for Aboriginal people, who call it ‘Larapinta’, meaning serpent. Many of the river’s numerous waterholes hold cultural significance for Aboriginal people.

Shortly after crossing Finke River, The Ghan passes the Iron Man, a weird assembly of rail track impedimenta constructed (with a certain amount of alcoholic imagination) into the form of a man. It marks the site of the one-millionth sleeper laid on the stretch of line between Tarcoola and Alice Springs.

The original line of The Ghan south of Alice Springs followed the route of the explorer John McDouall Stuart, along a light, narrow-gauge track well to the east of the present line. The old line suffered from flash floods, fire and damage by termites that, inconveniently, persisted in eating it. Travel was rather more haphazard in those days and legend has it that The Ghan was once stranded by floods for two weeks, and the engine driver shot wild goats to feed his passengers, which probably explains why goats appear reluctant to graze anywhere near the track these days. 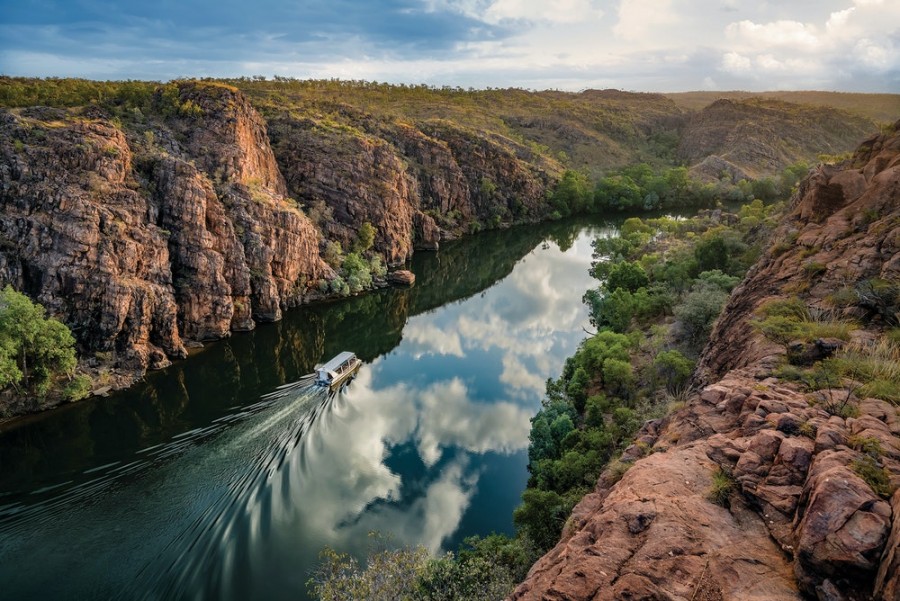 Alas, much of the stretch from Alice southwards is passed unseen at night, unless you are one of those who can’t sleep on a moving train. Dawn breaks around Port Augusta, and, if there haven’t been any night time hold-ups (to let freight trains pass – they do own the line after all) or break downs (to tinker with the 4,000-horsepower engines that pull the train), then it’s a steady pull now down through the wheatlands north of Adelaide, flanking the Flinders Range of mountains.

This is a very relaxing moment. I’m not fully awake, but I’ve been in the lounge car since before dawn, watching the changing landscape slip quietly by spotting groups of emus making the most of the field stubble, or black kites circling in search of something suitable for their breakfast menu. There are still camels here, descendants of those early beasts that played such an important part in Australia’s history. But, like the goats, they keep their distance in case The Ghan breaks down again and suddenly everyone gets a taste for camel steak.

Somewhat too soon for my liking, we’re pulling into Keswick Station on the outskirts of Adelaide; pity, I was just getting into the sort of romantically fuelled state of mind necessary to get the most out of the history, culture and achievement of this great rail journey.

Maybe I should just have stayed on board and gone back to Darwin.

Tell me more about riding The Ghan

The cost of making the journey (one way) between Adelaide and Darwin various depending on the standard of service required:

Prices are reduced by AUS$200-AUS$300 during the shoulder season: November and February (southbound), and April (part), September to November, and February-March (northbound).

In addition, there is a series of immersive Off Train Excursions available: river cruises, cultural experiences and optional camel rides or helicopter flights. You can also cruise the Nitmiluk Gorge, learn more about Katherine’s ancient indigenous rock paintings, or discover authentic outback life on a cattle station.

Here you can all the information you need about travelling on The Ghan, along with the ability to book your own trip.

This feature is an abridged extract from Terry Marsh’s book ‘Down Under Dreaming’, available on Amazon both as a printed book and an e-book. 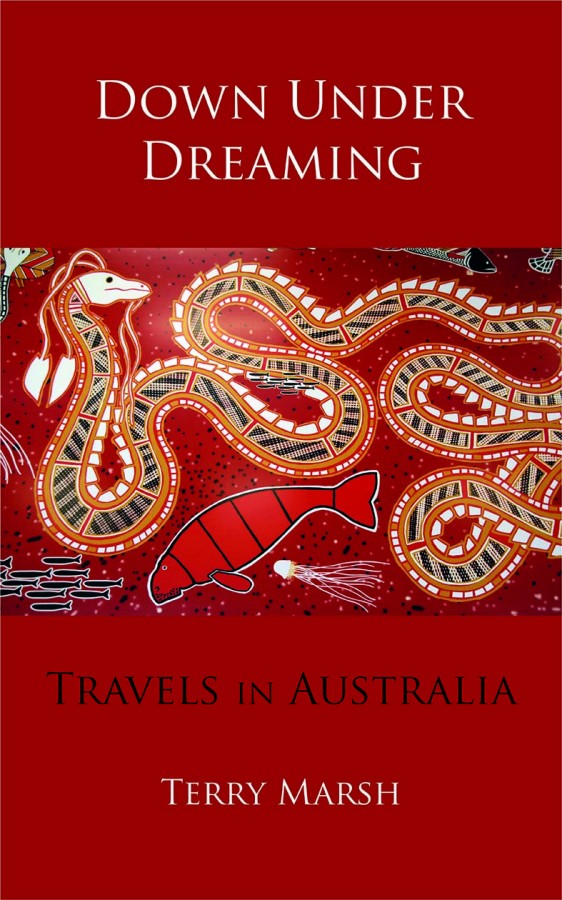 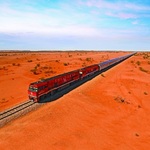 The Ghan is Australia’s longest train 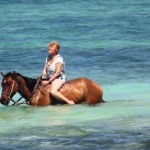 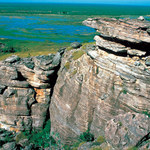