I was looking forward to a gentle bike ride along the Colorado River when Kevin threw a full suit of body armour at me and pointed upwards. “we’re going up there,  to the top of Snowmass Mountain and biking down.”  I  clench everything at that point to keep my modesty. Welcome to Snowmass in summer I say to myself.

Aspen may take all the headlines around here, but just a ten minute ride away, Snowmass could be the cute little sister that everyone secretly prefers. Snowmass has many of Aspen’s star studded trappings, (residents like Goldie Hawn, Kurt Russell, Kevin Costner and Jack Nicholson)  but it does them in a more understated way. 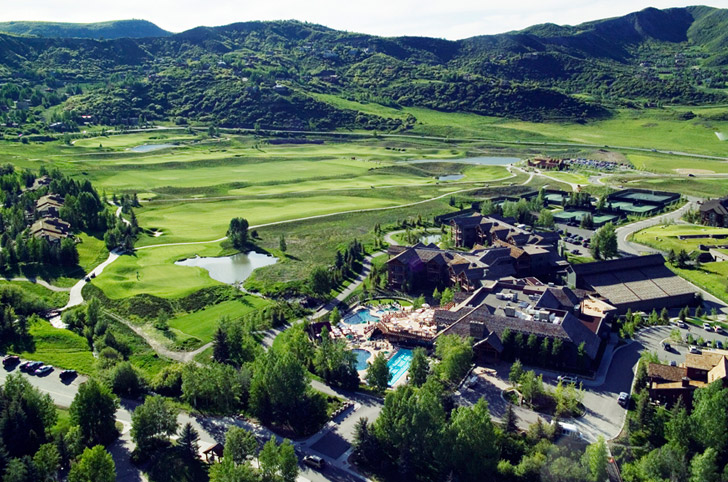 The Base Village development is the hub for many things; a meeting place, a mountain gondola ride, eating and drinking.and even an Ice Age museum with over 5,000 bones of ice age animals excavated nearby. Within walking distance the Westin and Viceroy hotels are the high end haunts for the well to do, with plenty of watering hole hang outs. A little further up,  The Edge Restaurant with its Alpine inspired cuisine is fast attaining almost legendary status with both visitors and residents alike.

My epic mountain bike adventure begins at Base Village, where some 4,000 feet higher up,  I emerge from the Elk Camp gondola looking like a star wars storm trooper armed with my trusty bike. Kevin informs me this is no ordinary mountain bike. “it’s got hydraulic brakes and reinforced suspension.” I clench once more. “so, you only need to keep a finger pressed lightly on each brake” he warns. “otherwise the bike might stop sharp, but you won’t”  A mental image of me gliding on fresh air briefly enters my head as I clench again.

There are three main bike trails down Snowmass ranging from the newly opened Verde which is the one I am attempting, to the high octane freeride jumps of the mighty Valhalla. “My saddle’s a bit low” I murmur at Kev “Don’t worry about that, you’ll be standing up all the way down” 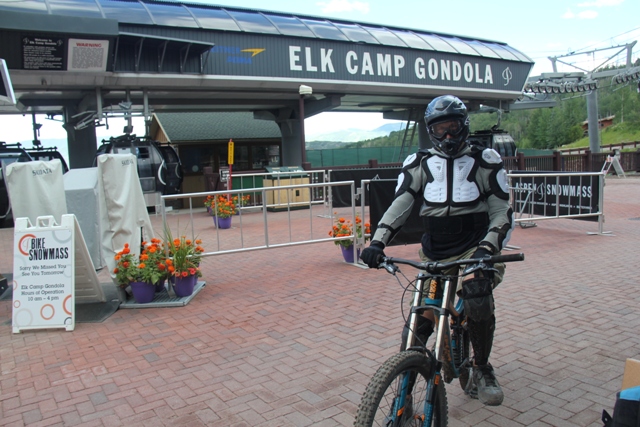 Despite Kevin’s attempts at scaring me to death, I did love every second of my downhill ride, although I have to admit we walked a couple of the hairpins.  Some 40 minutes later , through 4 miles of Aspen groves, I arrive back at Base Village eager to do it all again.

It’s another glorious sunny day and after my biking exertions, I’m faced with a decision; hot air ballooning or white water rafting. I opt for more adrenalin creation with a half day rafting on the Colorado River with Blazing Adventures.

The bus picks me up at The Westin and I join a group of first timers and repeat offenders. Pretty soon we’re all buddies on the 90 minute ride to the river. ” Hey ” says a guy who looks the image of Robert DeNiro  ” you look like Bruce Willis”  I turn and acknowledge the compliment.  A bus full of movie stars, who would have thought. 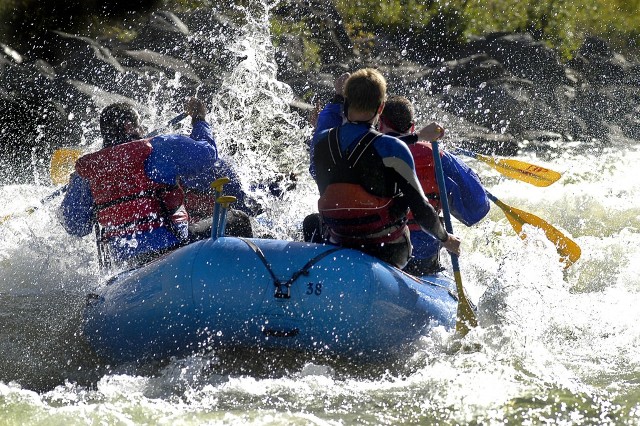 Down at the river bank, the rapids are brutal.  Pounding against rocks for what looks like miles.  Our inflatable kayaks await and we’re given life vests and optional rubber suits. DeNiro and me pass on the rubber obviously. We split into groups of eight per boat and it seems DeNiro and I are destined to be together forever. After a brief paddle lesson from boat skipper Vince, and a short but highly informative lecture on survival in water which I devour every word of, we all climb aboard. It’s at this point I notice the lack of seating. Vince is quite clear about this. “Just perch on the side and anchor your toes into the rubber”

I feel another clench coming on. 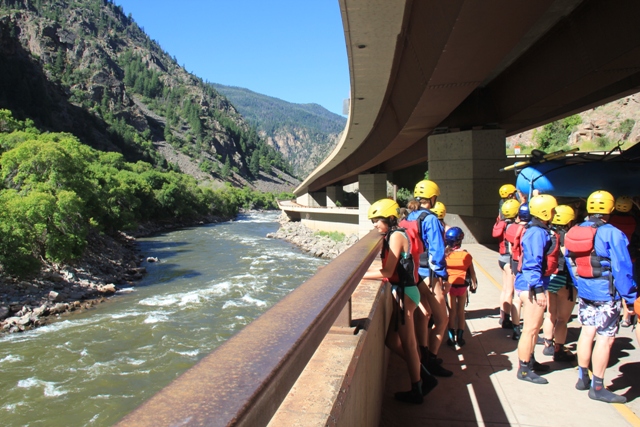 DeNiro naturally takes the front without so much as a backward glance. We all perch. And suddenly we’re in, catching the current and hurtling into the white maelstrom. This is a rush. No question. I’m soaked, but exhilarated. We paddle as a team as instructed by Vince who is at the back (and I suspect doing all the work) steering us through one rapid after another. After the thrill of the early rapids, eventually, the river settles down and we glide along through impressive canyons and even have time for some swimming by the side of the kayak like the rapids in a sort of natural lazy river ride. A few hours later and we’re all safely back on dry land enjoying a barbecue lunch included with the tour before getting dropped back to our hotels. DeNiro is fast asleep. 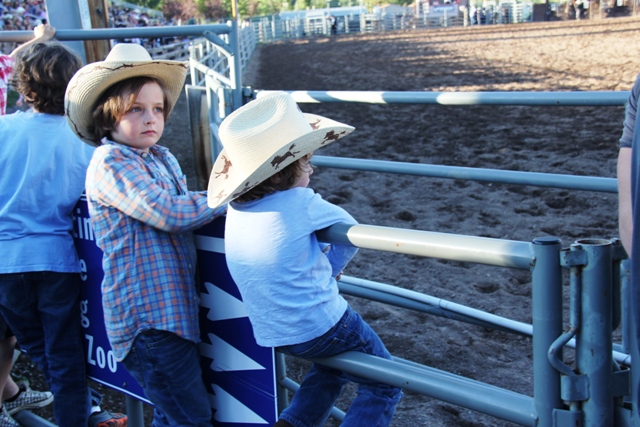 Wednesday night is rodeo night in Snowmass where cowboy hats and boots are the fashion accessories of choice for all the family. Even the little ones. I grab a beer and mosey over to the arena where the announcer is  revving up the crowd in anticipation of some broken bones as the bull riding competition is unleashed. 400 pounds of angry bull trying to throw off his rider. Mercifully, this takes about five seconds and with no fatalities, I breathe again. It is night of great skill though, plenty of brilliant bucking bronco horse play, with the ladies’ timed barrel racing my personal favourite; my mouth agape at how these lady riders can turn fully charging horses on a dime as they compete to see who can be the fastest to navigate three barrels placed around the arena. 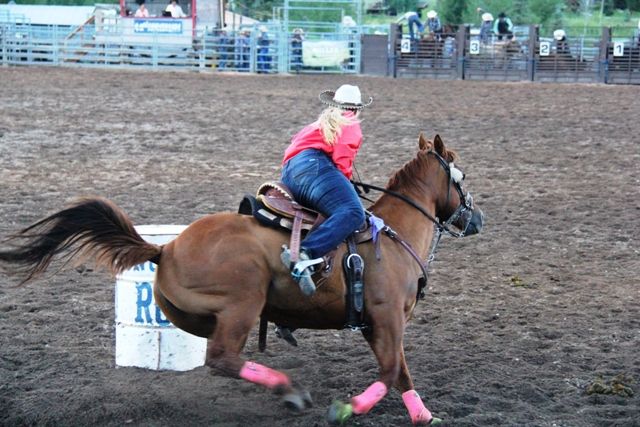 I’m introduced to a new rodeo gambling phenomenon; chicken bingo. A rooster walks around a numbered board and if it poops on your number you win! Clearly not up on the tactics of rooster poop I fail spectacularly. 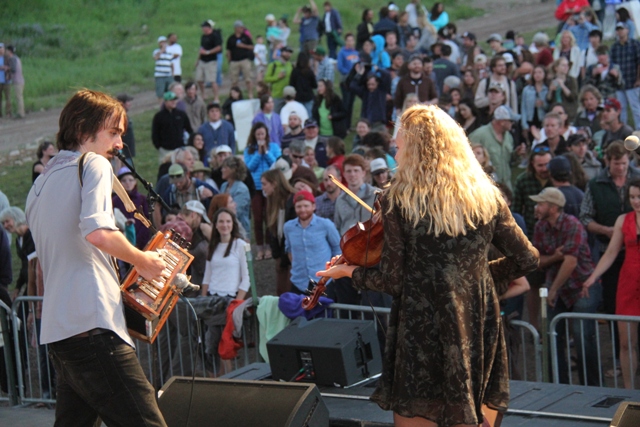 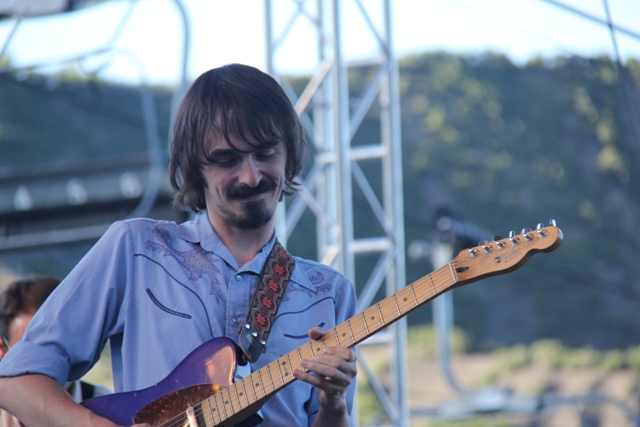 Snowmass also hosts a free outdoor concert every Thursday night. during the summer, on Fanny Hill at the base of Snowmass Mountain right next to the Westin Hotel. The concerts embrace all kinds of genres, from reggae to jazz and tonight it’s Feufollet, a Cajun/country  band from Louisiana, and everyone is out on the hill enjoying wine sitting on picnic blankets or dancing down by the stage. It gets lively towards the end of the set, and I spot DeNiro busting some moves to a country version of the Beach Boys’ Heroes and Villains. ” Hey Bruce”  he yells, “yippee ki yay!”

Tell me more about Snowmass in summer.

Black Tomato (www.blacktomato.com, +44 207 426 4947) can arrange a 7 night summer adventure holiday to Aspen and Snowmass from £2,799 pp from April – September.  Price includes return flights to Denver with British Airways, accommodation at the Little Nell Hotel in Aspen and The Westin Snowmass on B&B basis, private transfers and excursion such as rafting and mountain biking.  For further information:www.aspenchamber.org & www.snowmasstourism.com

United offers nonstop trans-Atlantic service from more U.K. cities than any other airline, including daily nonstop flights from London Heathrow to its hub at Chicago/O’Hare, with onward connections to Aspen, Colorado and over 300 other destinations across the Americas. Return fares in Economy from Heathrow to Aspen start from £888.16 (including taxes, September 2015).  For latest prices, visit www.united.com or call 0845 8444777. 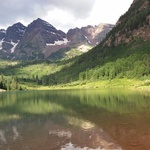 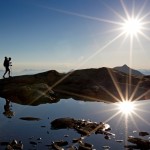 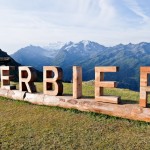