And demonstrating the statue’s power to cast its spell over visitors to the station, Eurostar’s very own ‘kissing couple’, Train Manager Adele Gent and Station Shift Leader Simon Gent, recreated the famously amorous embrace at the statue’s feet.

The couple, who have recently celebrated their first wedding anniversary, met and fell in love over 10 years ago working together on the international high-speed train service.  Adele and Simon were amongst the first Eurostar staff to be presented with their new uniforms and have worn all three versions since joining the company.

“Our new uniforms signal the next chapter in Eurostar’s story and perfectly capture the glamour and romance of international high-speed rail travel.  Our first new design in a decade has been meticulously researched and the attention to detail in every uniform is second to none.  As Eurostar enters its twentieth year, this is a proud day for all of our teams and we are looking forward to our customer’s reactions and comments today as they catch their first glimpses.”

The statue project, a closely guarded secret for several months, was executed over five nights under the cover of darkness by costumier, Maggie Cooke.  Using more than 95 metres of fabric, the nine metre tall replica uniform is accurate down to the striking yellow piping on the jacket collars and the eye catching patterned neck scarf.  The statue has been under wraps since Thursday last week while the fitting took place and was unveiled at 05:00 this morning.

Commenting on the new uniforms, Dennis Nothdruft, Fashion and Textile Museum Curator, said: “One of the roles of a uniform is to convey a message to the customer about the role the wearer plays, so it’s crucial to get it right.  The new Eurostar uniform is timeless – a classic tailored look with a well-cut suit that brings a feeling of confidence and that translates to the customer.”

The new uniform was designed by Christina Burke from Jermyn Street Design, who has a background in high street fashion.  She explains her inspiration behind the new look:“Eurostar’s metallic ‘e’ sculpture and the curves of the lines on the new train livery is a theme running throughout each garment.  We have also incorporated the iconic Eurostar yellow as a classic contrast to the metallic tones.”

Their introduction heralds the much anticipated arrival of Eurostar’s new state-of-the-art fleet of trains from 2014 onwards.  The uniform design has itself been inspired by Eurostar’s new train livery which will be unveiled officially this year when the first of its new trains enters commercial service. 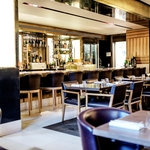 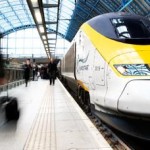