“This huge marble staircase was rebuilt five times because each time Ceausescu walked up it, he found it too tiring.”  Another jaw dropping snippet on our tour of the gigantic People’s Palace in Bucharest ahead of our private dinner in one of its cavernous rooms. It’s a suitable climax to our Tauck Danube River Cruise and something of a coup if you’ll forgive the expression, because this is a Tauck exclusive; eating at the People’s Palace is simply off limits to mere mortals.

This huge building may have gone down in history as the brutal dictator’s final folly, literally bulldozing neighbourhoods and making  thousands homeless just to have something to compare with the sights he and his wife saw on a state visit to North Korea, but Romanian’s today prefer to see it as a lasting tribute to the thousands of citizens who spent days and nights building it. So it remains as the country’s Parliament Building.

Our Bucharest adventure comes at the end of a captivating eight day voyage eastward down The Danube from Budapest to the Black Sea on Tauck’s MS Treasures, taking in Hungary, Croatia, Serbia, Bulgaria and Romania. For some, it’s an opportunity to explore their family roots, for others a glimpse of an eastern Europe not normally on the tourist radar. Towns such as Vukovar, a Croatian port town almost totally destroyed by Serbian guns during the Balkan war, Ruse in Bulgaria, an elegant 19th century neo-baroque lady, Belgrade, the seat of Tito, and Novi Sad, the Serbian prize of the Hapsburgs. For me though, it’s an opportunity to experience a new river cruise by Tauck, one of the best rated tour companies in the world; the Tauck family, still at the helm of a travel business celebrating its 90th birthday this year. So, how does nearly a century of tour expertise translate into a memorable river cruise?

Tauck’s MS Treasures is a jewel class riverboat built in 2011. It is 361 feet long and 37 feet wide with 3 decks plus a sun deck, an elevator serving 2 decks and a maximum passenger capacity of 118. There are 59 cabins of which 14 are 300 sq. ft. suites with 2 French Balconies, 7 cabins are 183 sq. ft. with French Balconies and the remainder are 150 sq. ft. Bedding is 400 thread count linen with Mako cotton pillows, terrycloth robes, hairdryers and flat screen TV. There are two restaurants on board, The Compass Rose, the main dining room, where open seating is available during 2 hour window for all meals, and The Bistro at the rear which offers lighter options during the day and a special regional dinner each evening which requires reservations. Up on the sun deck there is a Jacuzzi, putting green and plenty of sun beds. There is also a small gym and spa and internet connectivity is free.

Sitting astride the mighty Danube, Hilly Buda on one side, flatter Pest on the other, Budapest ‘s capital never fails to disappoint. Her classy baroque and art nouveau architecture managing somehow to converse with crumbling soviet edifices in a sort of faded grandeur meets Rocky scenario. Old fashioned cafes with waiters straight out of central casting sit next door to young entrepreneurs with trendy coffee shops and  boutiques. Her boulevards rival Paris while other streets still bear shrapnel scars from wars and revolution. And of course there are the thermal baths. Over a 100 of them to explore. 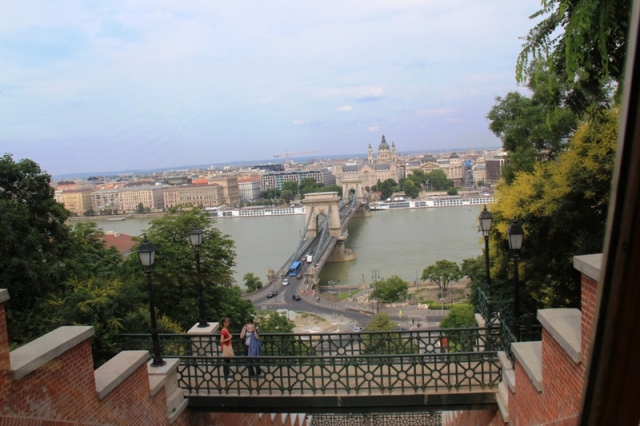 Our cruise begins with two nights in Budapest at the 5 star le Meridien hotel, just a five minute walk from The Danube and minutes from Andrássy Avenue, Budapest’s most famous street.  At the airport I’m picked up with another couple Paul and Ilse from Philadelphia who I discover are returning to eastern Europe to see the city Ilse left as a refugee after the war. At the hotel, Tauck tour directors Linda, Andrea and Joeri are on hand to brief us about the next couple of days which includes a welcome dinner for all 100 cruise guests tonight at the very grand Hungarian Academy of Sciences. 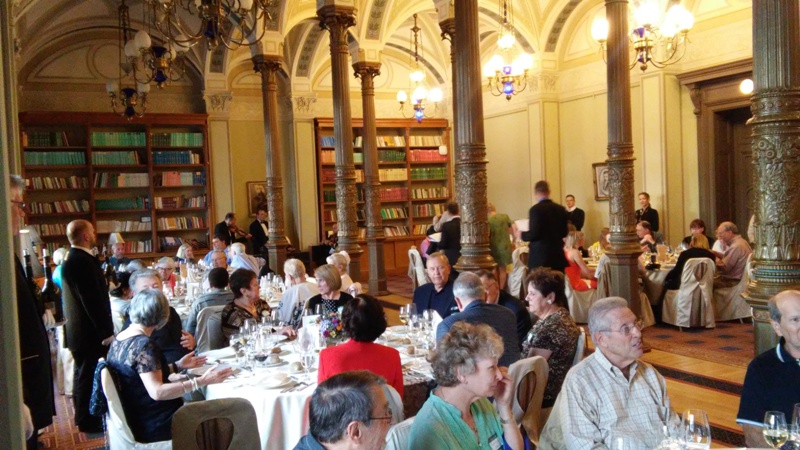 The academy dinner lives up to the billing; a wine and canapé reception to bond with our new shipmates, many of them Tauck veterans. I chat with Marty and Sherry and learn it’s their twentieth Tauck tour (in my head I think if I was a Tauck Director I would sponsor their health insurance). The four course dinner with wine is top drawer, served with typical Hungarian formality  – starched white apron clad waiters and a string quartet. I sit with Gene and Evelyn on one side, who proudly announce this is their first trip outside the USA, whilst Brad and Betsey on my other side grill me on European politics. After dinner I spot Marty and Sherry comparing Tauck tour numbers with three other veteran couples. Sherry’s beaming so I guess they’ve won.

After a guided Pest tour the next morning, we’re free to explore Budapest on our own. No shortage of things to see and do here with tour director Linda offering a few hints along with a Tauck  list of recommended restaurants for dinner tonight at my expense. I choose Cafe Kor a cosy Hungarian style restaurant in one of Budapest’s old turn of the century buildings. Plenty of locals and an outdoor terrace. Perfect.