Bari is so unrepresentative of Puglia – the formal, imposing and rather austere capital of a region which is all about charm, informality and joie de vivre – that it’s surprising to find a suitably charming and informal restaurant in its back streets.
Terranima is a microcosm of rural Puglia – its trompe l’oeil decor is designed to evoke the feeling of a street in one of the region’s hilltop towns – and the food is utterly authentic.

There is nowhere better to order one of the unending antipasti platters for which Puglia is famous, and which quite honestly makes a meal on its own.
Piero, the owner of this organic restaurant, has travelled the world but sticks to authentic local produce now he’s home. 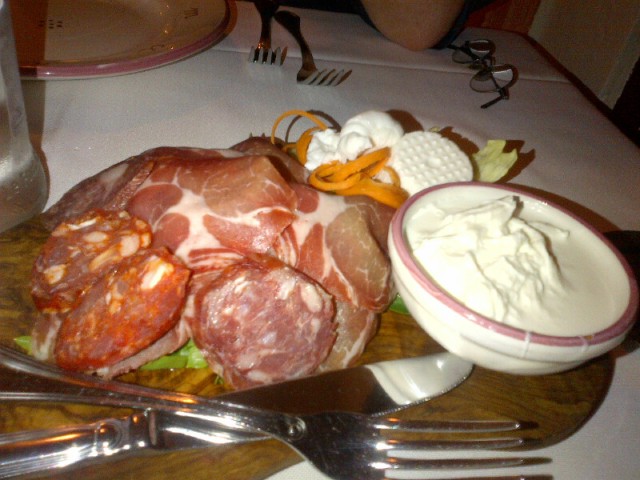 Plates were heaped with burrata – the divine Puglian mozzarella stuffed with cream – as well as capocollo, the cured pork neck for which nearby Martina Franca is famous, and other charcuterie.   There were stuffed vegetables, too, and many other delights including huge, tasty celery leaves presented as a salad element.

The pasta course in Puglia won’t be to everyone’s taste – Terranima’s   orechiette (it stands for little ears) made with egg-less dough were quite chewy, but linguine with scampi, tomatoes and green beans was delicious.   Somehow we managed to follow all that antipasto and two plates of pasta with roast veal on a bed of polenta and ice-cream unusually drizzled with olive oil.    It was a feast, and we wished we had had time to come back to Terranima’s cafe next door next morning for a breakfast of coffee and amazing fresh-baked goodies. 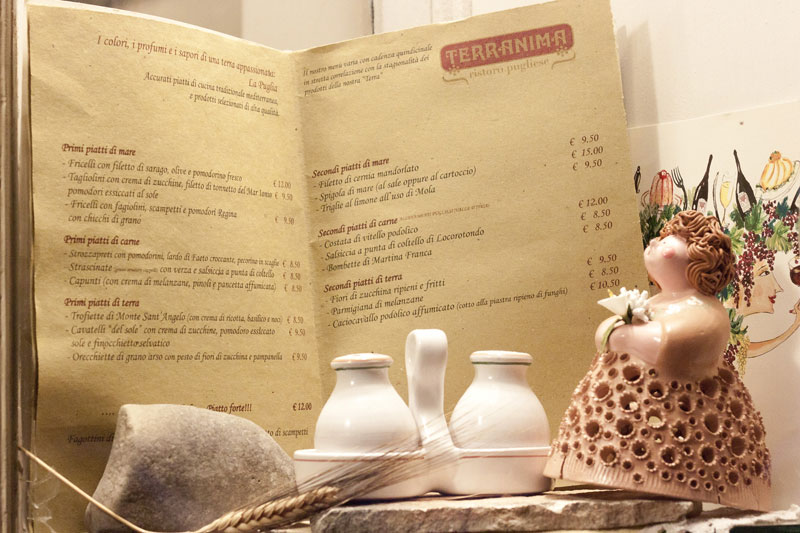 Given that Bari is the gateway to Puglia where almost everyone starts their exploration of the region, it’s worth nipping to Terranima for a first look at the region’s food; the prices are incredibly reasonable, and Piero also keeps a great list of local wines.