As unsung as its historic hometown, an unfathomable omission from the “England’s most visited” lists, Tewkesbury Park is a plain-clothes jewel which must be experienced to fully appreciate its offerings.  A smart, modern hotel and restaurant, recently renovated at a cost of £10m, not to mention a sweeping 18-hole golf course in 165 acres of undulating parkland,  are eclipsed only by the town’s exquisite riverbank, wealth of Tudor architecture and Tewkesbury Abbey, one of the nation’s finest Norman churches.

It was their long love affair with the Frank Pennick-designed course which inspired Linda McIntosh and her son Chris to take over the hotel which sat beside it and plough millions into transforming the handsome 18th-century manor and neglected modern extension into a modern, dog-friendly establishment with 21st-century comforts. 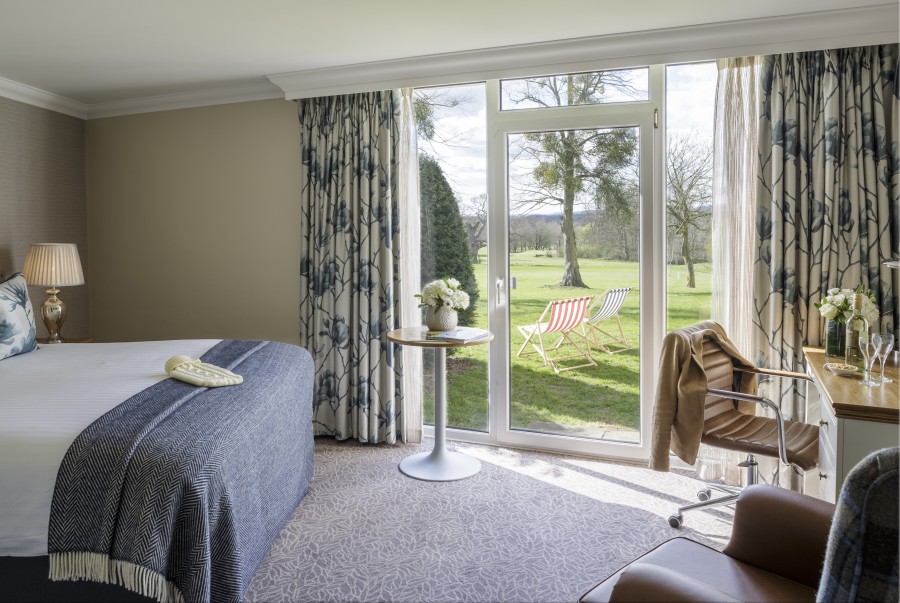 While only top suites in the original house come with huge bow windows and five-star touches like copper bathtubs,  guestrooms are handsomely furnished with memory foam beds dressed with tweed cushions and throws, high-quality blonde wooden furniture and hot water bottles encased in their own cable-knit cardies.    Dogs are welcome and housed in a wing whose rooms open directly onto the grounds; our pooch was particularly impressed with his own memory foam mattress, not to mention a sachet of upmarket dog food.

While owners are encouraged to dine alongside their pets in the Piano Lounge, where proper dogs’ dinners are prepared by the chef to order(yes, there are sausages for breakfast), there’s no denying the Mint Restaurant has more ambience and is mercifully free of Muzak. 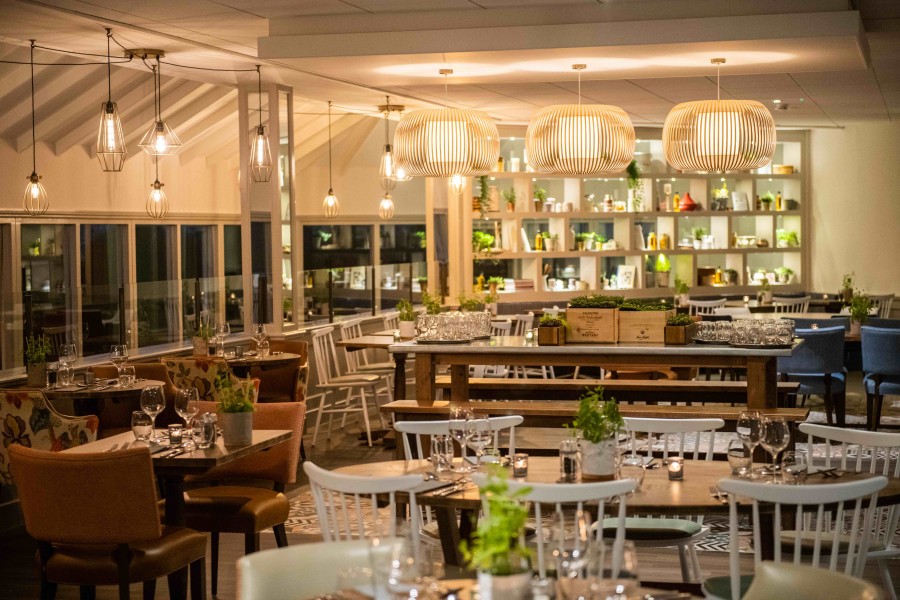 Chef Anuj Thakur, who has catered for the Queen at Ascot, fields a fine menu of classics and less predictable dishes which includes an excellent Creedy Carver duck confit and one of the best steaks ever tasted in Britain, a sirloin on the bone served with a perfect peppercorn sauce as well as to-die-for triple-cooked chips.  Malabari fish curry pays homage to Thakur’s heritage and the start of his career in one of India’s finest old colonial hotels.  From a remarkably diverse and well-priced wine list, the Bogle merlot from Clarksburg, California was a steal at £35, one of many bottles also available by the glass. 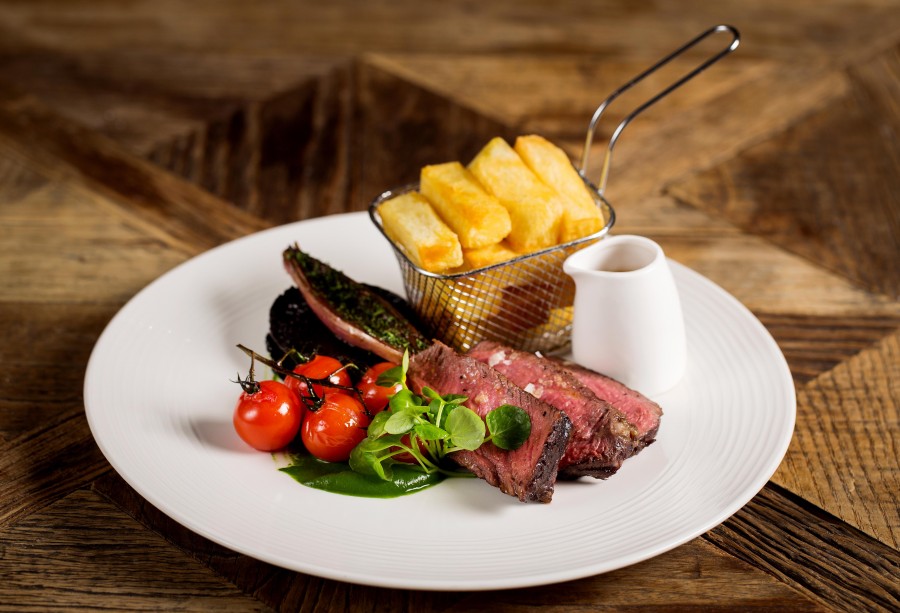 Golf is £38 per round, there’s a full-service spa, squash and tennis courts, sauna and steam room, but it would be a shame not to spend most daylight hours exploring Tewkesbury.   Try to visit the Abbey, the church of the monastery confiscated by Henry VIII bought back by the townspeople, when the sublime choir and organ are in performance mode and do descend behind the many half-timbered buildings to walk beside the confluence of the Severn River.   Dozens of narrow alleys running between the old houses are another distinguishing feature, and there’s a lively Saturday market.     As for the flags everywhere in summer, they represent the many factions fighting in the Battle of Tewkesbury which was a determining moment of the Wars of the Roses in 1471; the golf course overlooks the field, which is the site of an annual re-enactment and Mediaeval Fair. 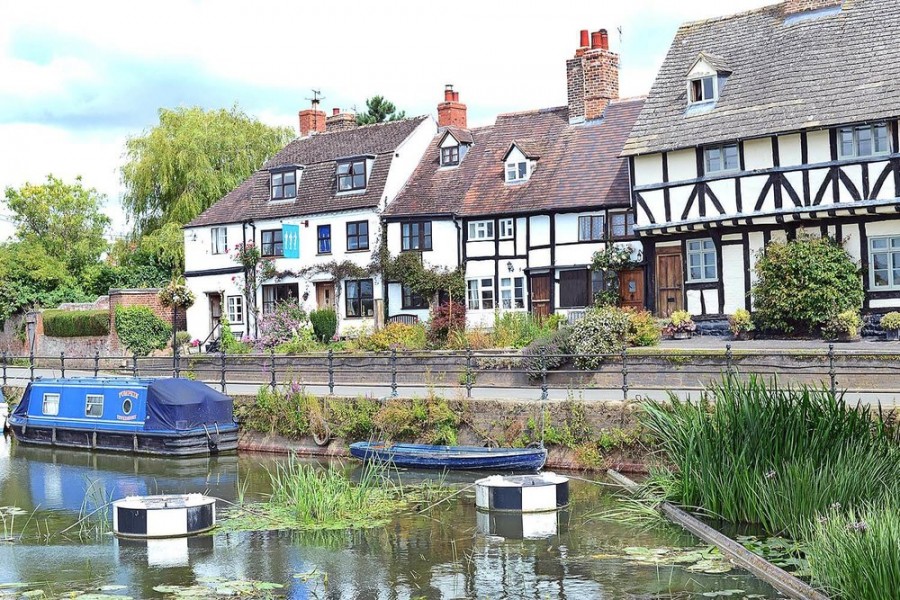 Tewkesbury also forms part of a golden triangle with Cheltenham, a treasure-house of Regency architecture, a few miles to the south-east, and Broadway, one of the golden stone jewels of the Cotswolds, to the north-east.  It’s also famous for its mustard – just the thing to go with one of those Tewkesbury Park steaks, which can be picked up for home consumption from the town butcher who sells the spicy condiment!

Rooms from £125 including breakfast. 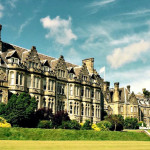 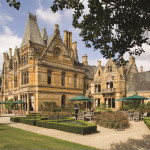 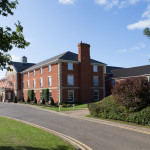