Michael Edwards learns some of the secrets of Moroccan cuisine after a culinary master class at the Fez Cooking School.

Fez maybe Morocco’s second city but it is the country’s Foodie Capital. While Marrakech’s population is getting bogged down with bureaucracy and politics, Fez folks take the important decisions in life – which olives to select? Where can you find the juiciest oranges for dessert?

The Fez Cooking School course begins with an adventure into the ancient Medina of some 9,500 alleys with your chef and a guide. We are on a mission to gather together the ingredients for a chicken tajine with zaalouk, a spicy smoked aubergine purée and a dessert that can only be described as a “Fez Mess”, layers of thin fried flat-bread interspersed with strata of orange blossom cream. Jemima Mann-Baha, co-owner of the Palais Amani, where the school is based, describes zaalouk as her twenty-something son’s “favourite seduction dish.” 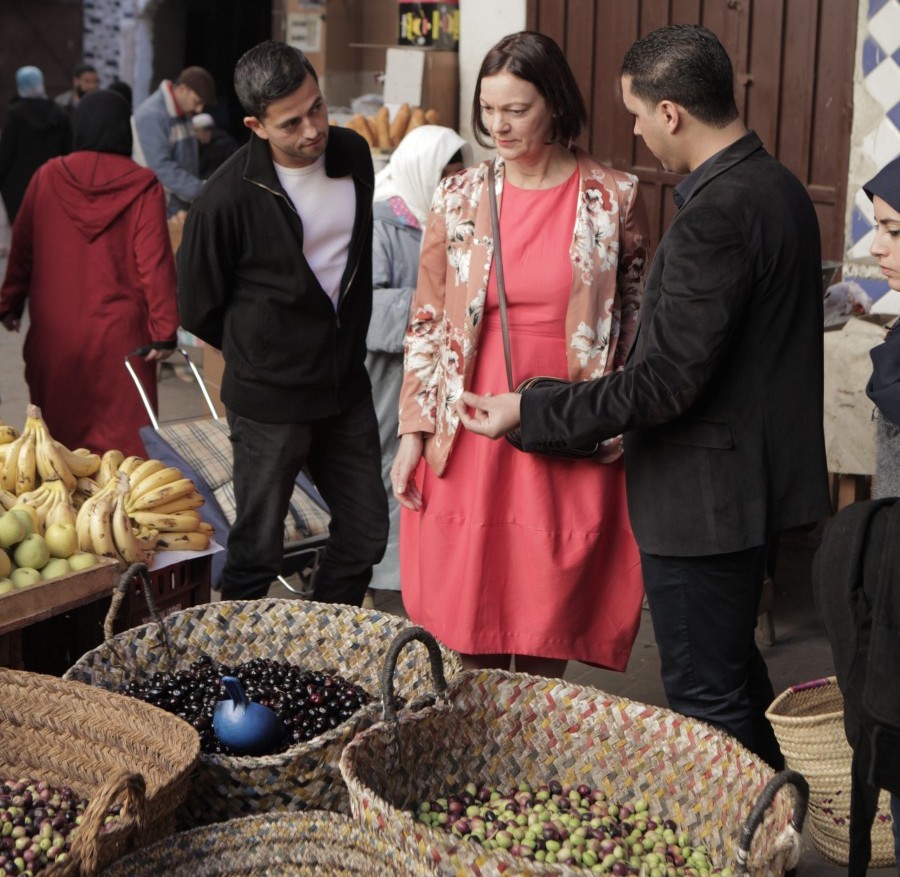 The two-hour tour of the Medina is more than just a shopping trip, it is an education. Food is geography. At the foot of the Middle Atlas Mountains, wells drawing up cool water provided the irrigation for the town of Fez to flourish.

Food tells the story of Fez’s history: in many ways, the table cloth is a flag of identity. Food is assimilation. After expulsion from Southern Spain in 1492, many Moslems chose Fez as their new home.

Food is independence and resistance. Even though Morocco was a French Protectorate the indigenous people still called their food by traditional Arabic names. They adopted the brioche but linguistically nationalised it as krachel. 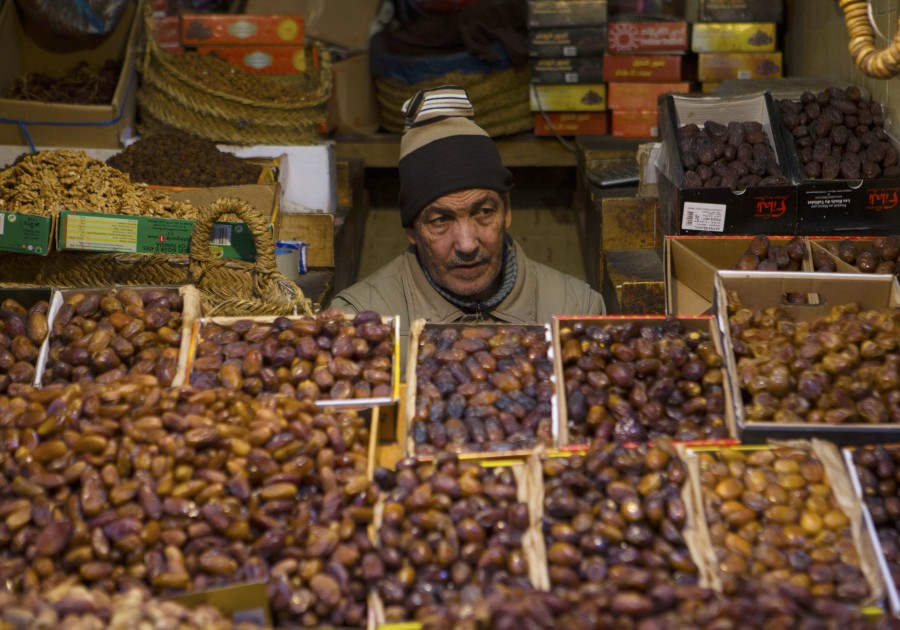 Food is social structure too. For generation after generation, women kneaded their dough in their home kitchen. But other members of the extended family took the loaves to a communal baker. If you take the Palais’ Bread and Pastry baking course, you too will take your loaves to one of these communal bakeries. In the souks old men shake their heads disapprovingly when they see women buying baked flatbreads, casting off the traditions of millennia. 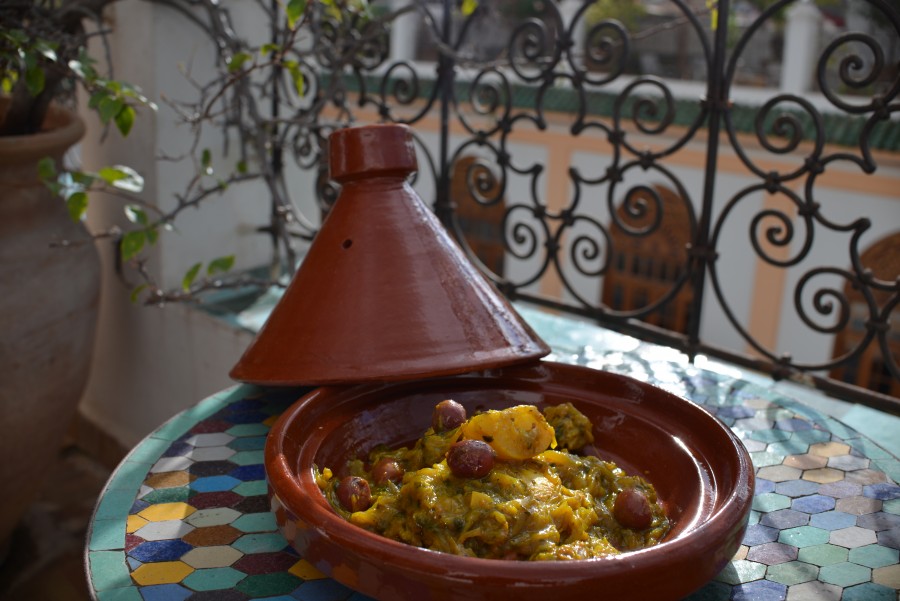 Some members of our group look a little squeamish when we approach a chicken stall. There are four cages of live chickens apparently resigned to their fate. A small cage of grey speckled chickens are clearly the premium product. Fatima gives us the bad news that those chickens are for special occasions. The good news is that our chosen chicken’s spirit had ascended to that Great Chicken Heaven in the Sky yesterday. Our chef’s instructions specified that the chicken should be left to marinade in salt and lemon juice for a night to reduce bitterness.

As we shop we pause, like locals, for snacks. First a garlicky soup and a hunk of bread. Then for sfinjat – Moroccan style doughnuts lightly fried in an oil favoured with cumin and salt.

No trip to the souk would be complete without a mint tea break. Atay Bnaanaa cheerfully creates our tea, as he has done for the past fifty years. Firstly, he brews a little black China tea with plenty of sugar. This liquid is then poured over leaves of absinthe, geranium, verbena, sage and plenty of mint. Priced at 10 Durham per cup this is probably the finest mint tea in Fez. 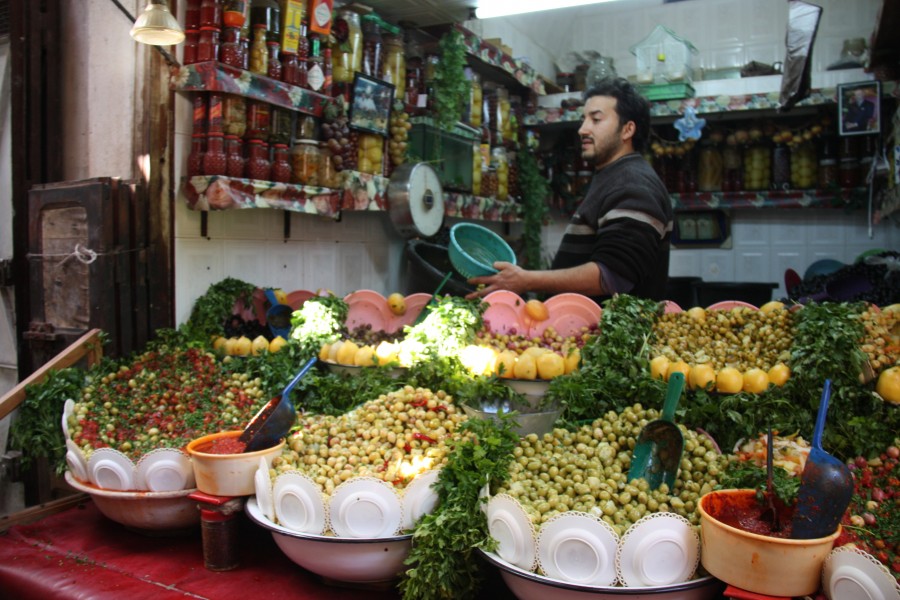 After our tea-break, we return to the Palais Amani and ascend to the Fez Cooking School, set on a roof-top that looks out over the Medina, to the mountains and to the Merinide tombs.

Zakia and Fatima, their size zero statures a testament to the healthy nature of the Moroccan diet, guide us through the cutting, grating, slicing and simmering as we create our lunch. Local Fassi chefs emphasise that their simmering – taking time to add the chilli, coriander, cumin, garlic, ginger, parsley, saffron and turmeric along the way – is what raises their cuisine to another level. 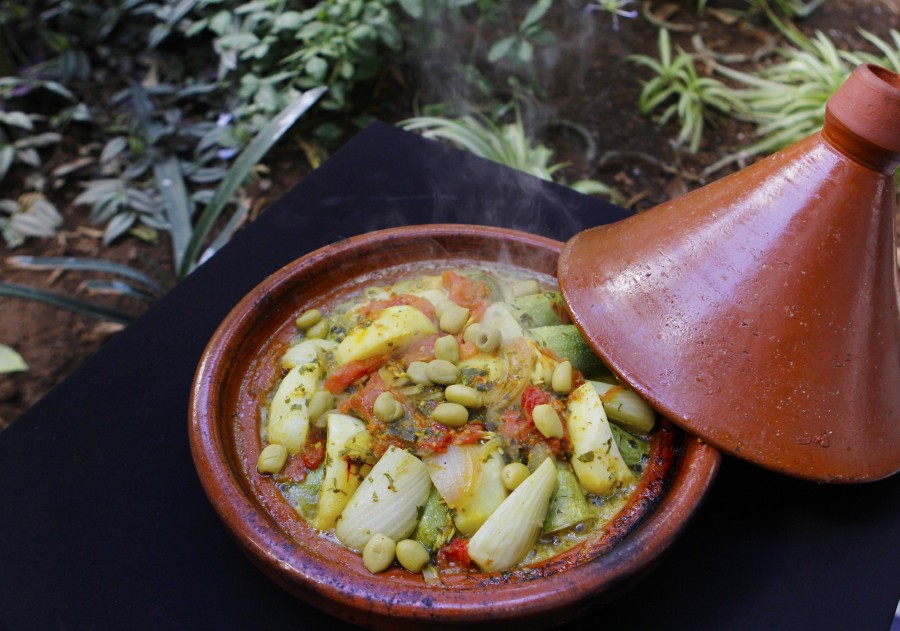 Eventually, our labours are done and we head down to the Eden Restaurant in the cool garden of the Palais Amani. It is a slightly nervy experience, having your own meal served to you by a waiter. But we need not have worried. Fatima and Zakia had taught us well, allowing us to share the secrets of Fez Fassi cuisine.

The tour of the Medina and cookery course costs around £70. 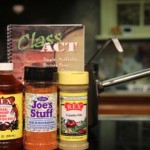 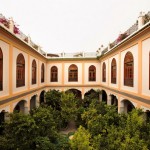 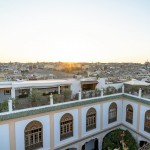