The atmosphere was just right; sitting in a large but graceful dining room and looking out over an Italian garden – and beyond to  30 miles of rolling countryside.   This was the romantic setting for our first dinner at the Welcombe Hotel, an elegant manor house, situated just outside Stratford on Avon.

It is  part of the Hallmark Hotels  portfolio and  as a  Grade 11 listed building that is so  quintessentially  British,  it  is  no surprise to hear that the  famous historian,  GM Trevelyan  author  of “A History of England”  was born here , and that this  AA Rosette  restaurant  was named  after the family. 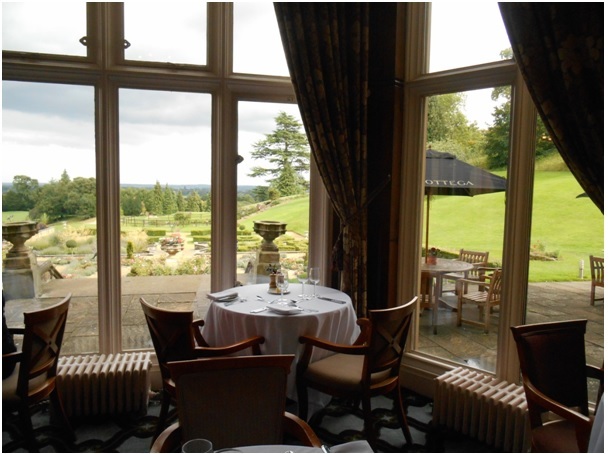 It’s a good 20 minute walk to the bustling medieval market town of Stratford on Avon but this is a great place to enjoy it – but also retreat from it. Set among 157 acres of landscaped grounds, the estate itself originated in 1182 but the present country pile was built in 1869 during the tenure of Mark Philips, a Manchester MP, all to the designs of architect Henry Clutton (known also for Battle Abbey and Lille Cathedral).

So we are talking imposing house, complete with all the trimmings of galleried staircases, ornate ceilings and oak panelling.   In fact it was so characterful that any moment I expected to be summoned to the library to be interrogated like some Agatha Christie character in a whodunit.

Our bedroom was an elegant suite of rooms complete with a four poster.  Overall there are 78 bedrooms to choose from, with different prices ranging from contemporary apartments to singles.  All come with free Wi fi, flat screen T.Vs and fluffy bathrobes. The one very slight drawback is that it is not possible to go from the hotel to the Spa, as although next door, it is in a separate building. 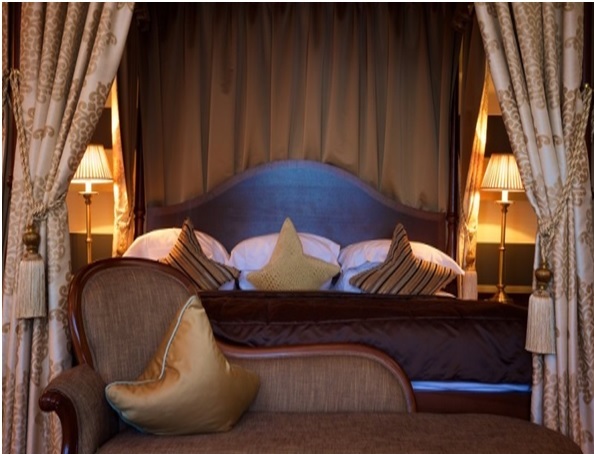 Our friends, who bought their lovely dog, a cocker-poo  – with the intelligence of a poodle and the enduring charm of a cocker spaniel –  were given a downstairs room away from the main house.  No need of course.  Sweep behaved impeccably throughout.

One of the many attractions is the rolling 18 hole championship par 70 golf course.   I plumbed instead  for a visit to the extensive Spa, free to all guests, with its 15 m swimming pool, its thermal experience  and,  as the sun was shining,   the use of the  outdoor Vitality pool.  It was busy but certainly not uncomfortably so, and had every facility needed from snack bar to well-equipped gym.

It was just as well, as dinner was extensive and   well presented, based as it is on British and European cuisine and with regional produce as the main feature, ranging from Gressingham Duck and Scottish Halibut  to  Welsh lamb. 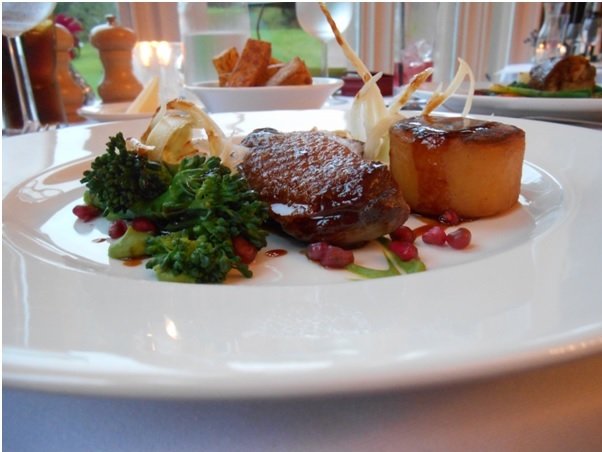 My soused Mackerel, Cucumber, Dill and Rocket was good, although my husband’s Sweet Potato, Cumin Soup, with curried oil,  was definitely tastier!

This was followed by 12 hour braised shoulder of Lamb with Carrot, Sweet Potato and Redcurrant Jus , which melted in the mouth.  While hubbie paid a  £6 supplement to  have his breast of Duck,  Potato Fondant , Broccoli, Fennel Pomegranate and Spiced Jus which was also tasty.

We greedily asked for a side order of triple cooked chips and these were the only disappointment as they were a big soggy.   Our desserts were Lemon Posset that came with meringue, raspberries and shortbread biscuit, and really melted in the mouth and Bakewell Tart with vanilla ice cream. 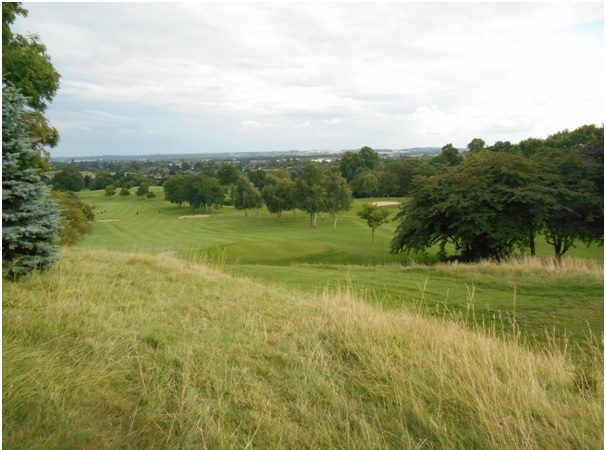 The Welcombe is also known locally as the best venue for a cream tea.  It looked absolutely delicious, and slightly ironically, can also be bought as part of a spa package.

The service in the restaurant was excellent and the receptionists really cheerful and helpful.  Overall it was a memorable and fun couple of days and, as I did not murder the butler, I am hoping to be able to return someday soon.

Tell me more about the Welcombe Hotel Stratford on Avon 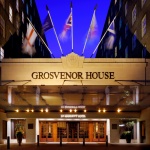 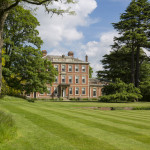