Lincolnshire is not short of stately homes, country houses and castles, notably the Elizabethan mansion of Doddington Hall, and the ghostly haunt of the Pilgrim Fathers, Gainsborough Old Hall.

But just two miles or so from the city centre, the compact village of Washingborough, with its stone-built cottages clustered by the church and along the High Street, can boast Washingborough Hall, a late Georgian manor house, dating from the 1700s, and a Grade II Listed Building.

Today a renowned 20-room country house hotel and restaurant, Washingborough Hall has a rich history of both ownership and enterprising use, not least when it saw service during the Second World War as a home for returning airmen, and, later, as a nursing home. Later still, and perhaps a little oddly, it was a nightclub before becoming the family home of Edward and Lucy Herring and their three children – of whom we heard not a peep! 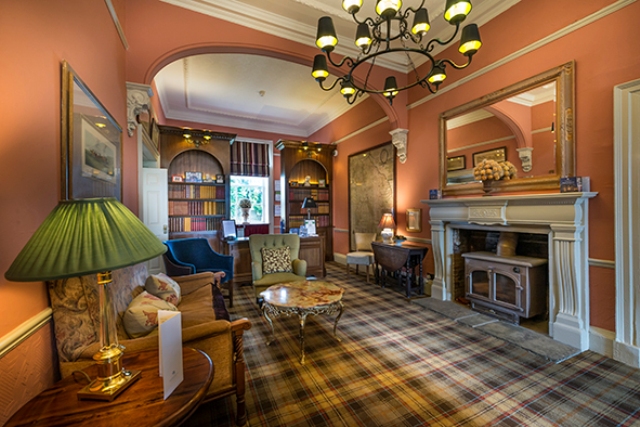 First impressions are a delight, especially if you arrive in the evening when external floodlights illuminate the warm Lincolnshire stonework of the canted bay windows, the Doric porch and semi-circular window above; it immediately says ‘Welcome’. Better still if you arrive on the breezy coat tails of Storm Doris, as we did. So, the warm reception was all the more acceptable, and not just because of its cordiality, but because unlike many hotels, here it comes across as a family welcome; everyone was friendly and helpful and, more to the point, interested in what you had to say. Okay, it may all be a professional charade; they were only doing their job, sort of thing. Well, I have to say, they were doing it very well, and in many ways, that’s just the quality and attention to detail that sets family-run country house hotels apart from big hotels the world over.

Inside, the bedrooms, which include two four-poster rooms, have an individuality of design that smacks of good taste, quality, sensitivity and luxury. ‘Hygge’ is the current buzzword − hot chocolately, crackling log fired, mulled wine homely cosiness – and it is very much a hallmark not just of Scandinavian appetites on dark winter nights but of everything British and heartfelt; it’s like being hugged by someone who loves you. 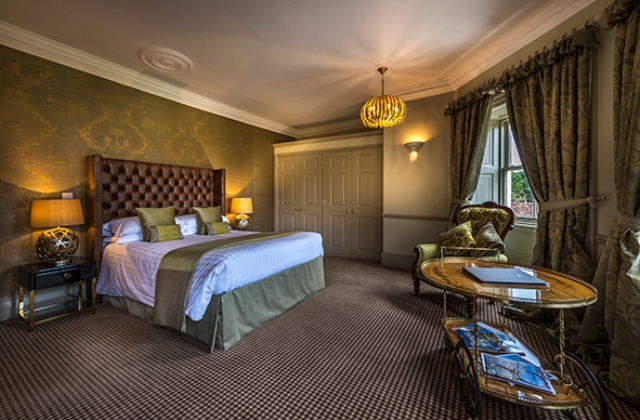 We occupied an Executive Room on the first floor, with a view of the front lawn and flowering snowdrops, and what a charmingly cosy place it was; spacious, three bayed sash windows, an ornate full length mirror and a hostess trolley with the customary array of teas, coffee, biscuits, magazines…and naughty snacks, like irresistible fudge.

Now, I don’t spend any more time in a bathroom than the next man, but here I could have happily camped in it; large walk-in shower with fixed and flexible heads, huge bath, toilet and washbasin and Occitaine ‘condiments’ from Provence. Bathrobes in the wardrobe, ironing board and even a fan for days not like today. 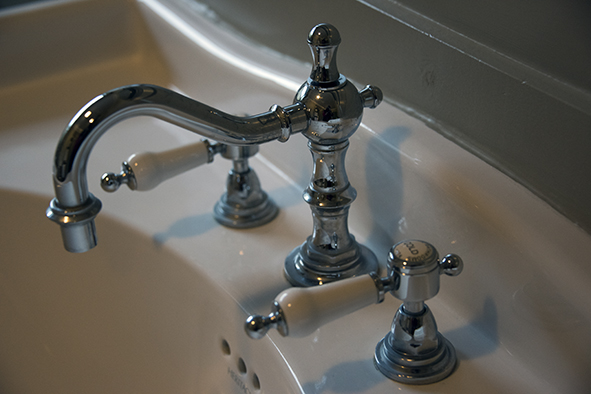 It’s a small thing, but unlike many chain hotels there were plenty of electricity plugs, and a strong and responsive WiFi service. This may not necessarily be a ‘business’ hotel per se, but even the eighty-year old Irish guest downstairs had a mobile phone that needed charging…I could tell by the way she shouted into it to be sure she’d be heard.

Eventually, thoughts turned to our stomachs, and while we were muchly tempted by the traditional afternoon tea of creamed parsnip soup and finger sandwiches, our evening meal demanded that we held ourselves in reserve. It was a wise decision.

The head chef is Mark Cheseldine who joined the Washingborough Hall team in 2016 from The Reform Restaurant at the Castle Hotel in Lincoln having built up a solid reputation at the Castle. In the kitchen, he is joined by proprietor Lucy, herself a Cordon Bleu-trained chef, who works closely with chef Mark to ensure that the restaurant continues to retain its two AA Rosettes. It’s a dynamic partnership, the evidence of which translates into a modest but sensible range of dishes that make the most of the very best of local produce, although – very minor quibble of mine – the provenance of the main produce is not given on the menu. 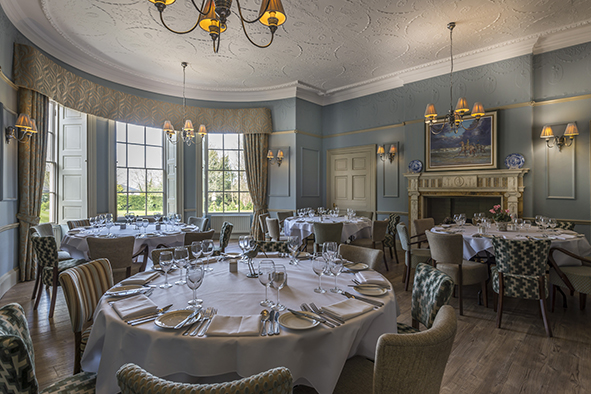 My wife opted to begin with pan-fried wood pigeon breast, mushrooms, Pancetta and truffle pasta with crispy kale, while I tucked into warm seared smoked salmon, soft boiled quail egg, sweet and sour peppers with a finely blended orange and tarragon hollandaise sauce. It was a great start, and as both dishes were priced under £7, excellent value for money.

Moving on to mains, my wife opted for baked cod fillet, herb and Gruyere crust, tomato fondue, a fricassée of clams, celeriac and spinach finished with lovage mash, an interesting combination. I was about to head for the braised shoulder of lamb when they told me that duck breast and gratin Dauphinoise was the day’s ‘Special’; that was a good choice.

It was pleasing to see that each course was restricted to just four dishes, which goes a long way to ensuring quality control and freshness of produce. The downside of that is faced by anyone who might be staying for a week, because that rather compels them into repeating dishes, or dining out when really, as the proprietor, you want them to be eating and drinking in your hotel, not taking their money elsewhere. However, the offer of a daily special resolves that issue admirably and sensibly without compromising standards. 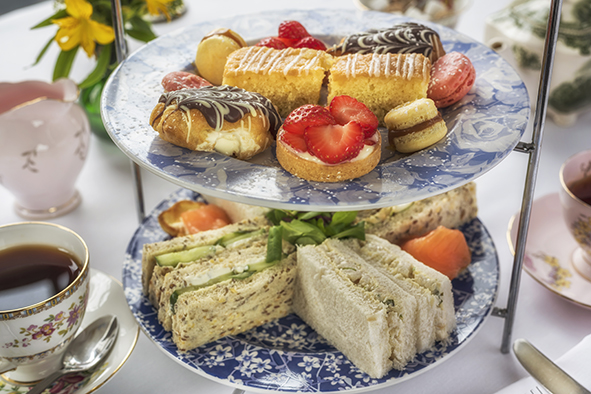 For dessert, I couldn’t resist seeing if the coconut pannacotta passed the wobble test (it did), but it was a close run thing with the chocolate and olive oil mousse, salted caramel shortbread sandwich and pistachio crumble which was every bit as good as an almost identical dish I once had in a two-starred Michelin restaurant in Nice.

Because several wines are served by the glass, it is possible, rather than having just one wine, to choose for yourselves a wine to match each course, especially since you can go for a medium or large glass. Having earlier sampled the Sauvignon Blanc Terre du Soleil, from Gascogne in France in the bar, another glass was fine to go with our starters. To go with the main course, I fingered my way down the wine list, before settling on a crisp and aromatic Château de Tracy, Pouilly Fumé, also from France. And to complement our dessert it just had to be a small glass of Castelnau de Suduiraut Sauternes.

With commendable good sense, all the wines are reasonably priced, with only a few topping £50, along with a couple of champagne choices that exceed £100. Prices by the glass are tightly priced, too. 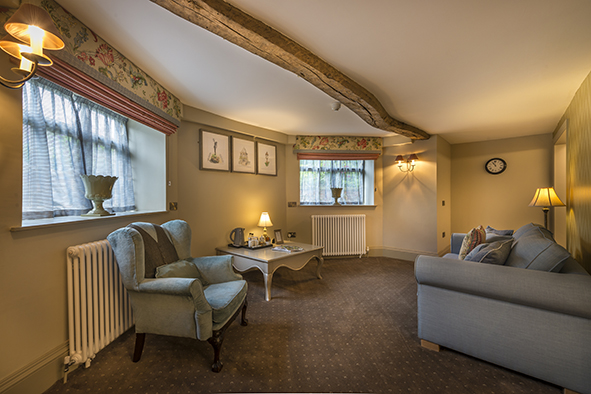 But, in an odd kind of way, the best was yet to come: a peaceful, wonderfully silent, admittedly rather wine-induced sleep in a most comfortable bed; bliss. Even the wood pigeon perched in the tree outside the window in the morning was unusually silent; perhaps it knew what was on the menu.

My wife and I no longer have a canine companion, we wish we still did. But our Teal would have given this dog-friendly hotel top marks, not least for its understanding of doggy ways and needs; I can just see her now, perched alertly at my feet checking out the comings and goings and wondering when it would be time for her small glass of Chateauneuf du Pape…1969 for preference!

She would have loved Washy Hall every bit as much as we did.

Bed & Breakfast Rates based on 2 people sharing except for the single rooms:

Dinner, Bed & Breakfast Rates (based on two people sharing except for the single rooms): 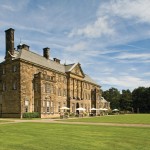 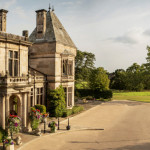