Ultra-luxury cruise operator Crystal Cruises bike shore excursions will begin this year with 16 bicycle Crystal Adventures in 2014. Throughout Northern and Western Europe and the Mediterranean, travellers can enjoy some of the world’s most striking architecture, charming villages, spectacular seaside views and historically profound sites, often best – and sometimes only – accessed on a bicycle.

Offered with May to September voyages aboard Crystal Symphony and Crystal Serenity, the half- and full-day excursions combine fitness with new, intimate perspectives on favourite destinations such as:

Malta – A 12.5-mile route travels through countryside only accessible by bicycle and along the western coastline toward the highest point in Malta, the Dingli Cliffs – dramatically sheering straight down to the Mediterranean Sea and providing spectacular panoramic views.

Tallinn – Guests will seemingly cycle back in time as they ride to the Baroque palace and summer home of Peter the Great, and around the UNESCO World Heritage Site that is the city’s Old Town, complete with ancient walls, cobblestone lanes and 16th century architecture – including a pharmacy that has been in business since 1422.

Copenhagen – In one of the world’s most bike-friendly cities, guests can truly experience the sites as the locals do, including a winding, five-mile ride through forest en route to a 500-year-old amusement park (the world’s oldest), Bakken, where they’ll have time to play and explore.

Bordeaux/Bassens – Along a nine-mile combination of flat and hilly roads in the quaint village of Saint-Émilion – whose entire wine “jurisdiction” is a UNESCO World Heritage Site – where guests will enjoy views of beautiful chateaus and expansive vineyards of such premier estates as Château Angélus, Figeac and Cheval Blanc.

Barcelona – An invigorating five-mile ride through the city’s bustling streets affords the opportunity to admire the profoundly impressive architecture of the cathedrals and other iconic buildings, while also enjoying performances from street artists that liven up the La Rambla boulevard.

Guernsey/St Peter Port – Along a six-mile stunning coastal path, travellers can marvel equally at L’Ancresse and Pembroke beaches and the Le Dehus Dolmen, home to Neolithic-era tombs that resemble a miniature Stonehenge.

“Many guests have become increasingly interested in more healthy pursuits that allow them to enjoy a destination in a more up close and personal way,” says Philip Ordever, vice president of international sales and marketing.  “For some, it is a lifelong dream to cycle through some of Europe’s most beautiful landscapes – a dream one wouldn’t necessarily expect to fulfill while on a cruise. These excursions allow guests to experience the destination in a very different way as well as build a special camaraderie within the group.”

With all the details of the bicycle Crystal Adventures arranged by Crystal’s staff and expert partners ashore, including helmets, bottled water, refreshments in most destinations and terrain-appropriate bikes, prices for bicycling excursions in Europe range from $89 to $249 per person.

In 2014, the line’s ultra-luxury ships will sail 23 European voyages of seven to 14 nights, with shorter “Crystal Getaways” and extended combination cruises also available. Until 30th April 2014, all-inclusive “Book Now” cruise fares for the line’s European sailings start at £1,210 per person.

For further information and reservations please call Crystal Cruises on 020 7399 7601 or visit www.crystalcruises.co.uk 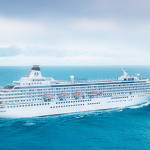