Situated in the westernmost part of Austria, bordering Switzerland and Germany, eating in Vorarlberg reflects its neighbourly influences in its food and has startling local products.

You can be forgiven for thinking that Austrian menus often contain not much more than dumplings and schnitzel but, in this part of the country, there’s a surprising diversity in the food on offer. Indeed Vorarlberg has occasionally toyed with leaving Austria altogether and, in a referendum held in 1919, they voted to join Switzerland. It never happened, although there was another attempt after WW2, but today Vorarlberg seems to punch above its weight, staging world beating opera and building outstanding modern architecture. It’s also going back to its routes in its restaurants

On the edge of Lake Constance, Bregenz is the capital but I’m bound for the mountains and arrive in the town of Brand in the middle of a snowstorm. I’m hoping to build up an appetite by doing some hiking and fortunately the cloud lifts, the sun comes out and I’m soon strolling on the tops.  Even though they’ve cleared the trails for winter hiking, I find myself walking on virgin snow, sinking and sliding as I make my way down the mountain. The views are tremendous, the mist floating in the valley and the peaks thrusting into blue skies. 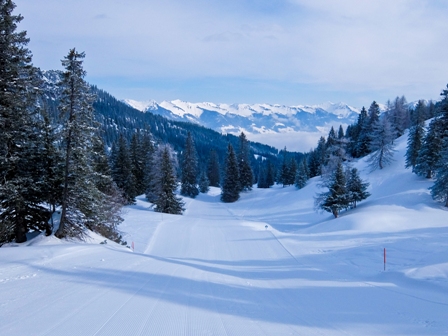 My real reason for coming is to indulge in the Gourmet Experience Brandnertal, a gastro feast which takes place five times a year, with five local chefs each providing a course. Each dinner is themed by colour with tonight’s meal at Hotel Sarotla designated green. They promise to serve regional and seasonal delicacies matched with Austrian wines.

As you’d expect with the green theme, Basil and various herbs feature heavily. Monkfish carpaccio is served with a cream of wasabi and basil, although it’s almost turquoise. Green tomato soup is topped with a foam of cress and a Thai basil salad of raw mussels has added coriander and peanuts. Now none of this seems very regional, as we’re a long way from the sea, but the lamb in the next course is definitely local. A nicely rare chunk of meat, surrounded by minced stuffing and wrapped in pastry sits on a bed of pea puree. 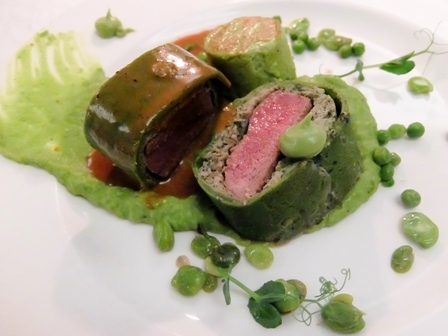 Wine pairing works well with a slightly fruity Gruner Veltliner 2014 white to go with the carpaccio, then an oaky nutty Neuberger 2012 white to match the mussels, and a full bodied Blaufrankisch Reserve 2011 red for the meat. The meal shows the high standard of the town’s restaurants and I particularly enjoy the mussel dish from Miguel Angel domingo Jabonero of Dos. Restaurant.  Now, of course, he’s Spanish not Austrian, which makes me even more determined to seek out the local boys. I hear there’s an eccentric chef in another valley who’s doing something unique.  Apparently, he only uses ingredients that he can see from the top of his mountain so I decide to investigate.

Now it’s not as easy as it sounds, as although the Kleinwalsertal valley is in Vorarlberg, the only way to access it by car is to go via Germany, as there are mountains in the way. You could call it “Dead End Austria” as it prevents German skiers from going any further. My destination is the Walserstuba Hotel in Riezlern and I’m greeted by chef owner Jeremias Riezler when I arrive.  Whilst he gets on with the cooking, he’s arranged a snow shoe trek for me with one of his friends, Herbert Edlinger. I’m wondering if this is some sort of test, but mercifully the trek is mainly on the flat and we even stop for snack. This is when I get my first taste of local products with a selection of local breads, sausage and cheese laid out on a board in the snow, all provided by Herbert. A slug of walnut schnapps sends me on my way, and within an hour, I’m back at the hotel. 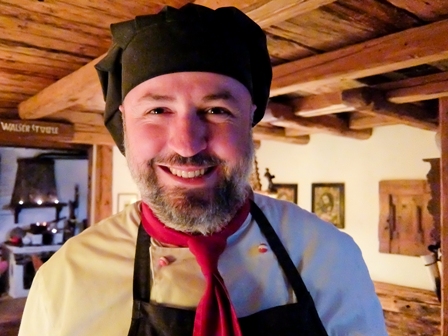 Jeremiah is waiting and he confirms that he only sources his ingredients from the area he can see from the Widderstein, the highest mountain in the valley. Mind you on a clear day the view extends right into Switzerland in the West and Allgäu in Germany to the North. Still, he only uses organic products and reckons the best meat comes from the game from the mountains overlooking the valley. “The animals have it so good here”, he says “and you can taste it.” Herbs, including sage, chives, thyme, mint, nasturtium and lemon balm, come from the garden behind the hotel and cheese is made in the alpine slopes at 1500m.

To start, I’m served a wooden platter containing products from animals which wander the pastures nearby. There are pieces of beef and pork sausage, a thin slice of local cured bacon from the same animal, and a tub of creamy lard bursting with flavour. Of course there’s his homemade bread to go with it and creamy herb butter 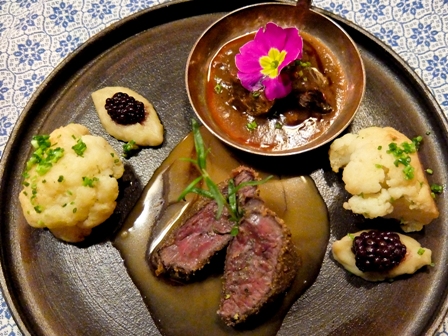 Next is a small boiled breast of veal, fried like a wiener schnitzel with potato salad and grated red and white cabbage. It’s followed by a finely chopped onion soup in a beef broth with flat dumplings made with local cheese and herbs. It’s like a version of French Onion soup, but the beef stock makes it something special.

Even more special is what comes next. The Alpine Ibis, a mountain goat with huge curved horns was almost extinct here until it was reintroduced in the sixties. It’s now thriving but only one is allowed to be killed each year.  Somehow Jeremiah has managed to get hold of some, and he serves me small chunks, stewed goulash style, with two slices of chamois steak, cooked rare, crusted with bread crumbs.

I begin to understand why he’s says the best meat comes from the mountains but I’m also impressed with what comes with it. There are florets of braised cauliflower, a puree of black salsify topped with blackberries preserved in schnapps, and potato finger noodles on the side. I really do feel I’m tasting the Kleinwalsertal and this dish is something I could only hope to eat here.

Now I’m put to test. He serves me a pale yellow ice cream and asks me to name the flavour. I’m completely stumped, tentatively suggesting liquorice, but when he reveals it’s hay harvested at 1800m, my taste buds click into recognition. 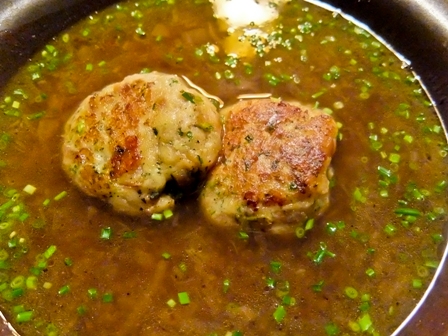 He’s keen to show me of his wizardry and returns with a pram crammed with sorbets – there’s huckleberry with sage, peach with lavender, apple with peppermint, cherry with elder, plum with tarragon, raspberry with thyme and pear with lemon balm. Sorbets with herbs and fruit are a good way of preserving flavours through the winter.

Another experiment he’s been conducting with the cold are semifreddos – half frozen desserts, made from eggs, sugar and cream.  His innovation is to infuse them with different types of conifer needles from the trees nearby. It’s very subtle and, even though I taste semifreddos of larch, spruce and mountain pine, I’m not sure I can tell the difference.  Certainly they’re refreshing and go well with a compote of blackberry, raspberry and red currant. 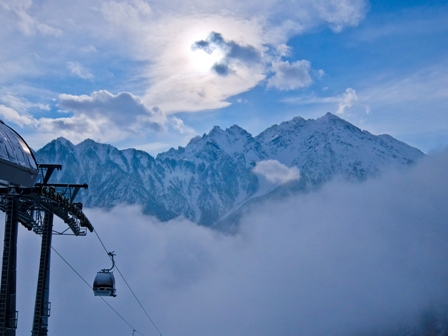 These days, many restaurants pay lip service to the idea of serving seasonal local products, but it seems to me that there’s a lot of cheating going on. Jeremiah is one of those rare exceptions, someone who takes his mantra seriously and genuinely loves the food that comes from his mountains and valley. That care and attention shines through in his cooking and it’s an honour to sit at his table. He’s started a quiet revolution in Kleinwalsertal and other chefs in the valley are beginning to take notice.

Tell me more about eating in Vorarlberg

Hotel Walliserhof makes a comfortable base in Brand.

Set dinner without wine costs 59 Euros at the Walserstuba and it also has rooms.

Vorarlberg Travel has information about the region.

Austria has information about the country. 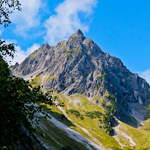 The Trail of the Walser in Vorarlberg