Eurostar ski services to the French and Swiss Alps

Eurostar’s popular ski services from St Pancras International and Ashford International to the heart of the French and Swiss Alps will open for sale on Eurostar.com at 6.30am* on 6 August 2013.

Launched in 2012, Eurostar’s Swiss ski service< transports skiers and snowboarders from St Pancras International and Ashford International to the heart of the Swiss Alps and the Valais region, with return fares starting from only £179.

This year, the route will run over five peak weeks during the 2013/2014 ski season including Christmas, New Year and February half term and passengers can carry skis or snowboards all the way at no extra cost.

With an easy connection in Lille Europe onto a high-speed TGV Lyria service, passengers arrive into Vallorbe, Aigle, Martigny, Visp and Brig stations, from where they can make easy connections to nearby ski resorts including Verbier, Zermatt and Saas Fee. Eurostar ticket holders benefit from exclusive, discounted onward travel to these resorts, simply by booking their ticket in advance through the Switzerland Travel Centre (STC) on 020 7420 4934.

Eurostar’s popular direct day and night services to the French ski towns of Moûtiers, Aime-La-Plagne and Bourg St Maurice also go on sale on the 6 August, with return fares starting from £149. The 2013/2014 seasonal ski services will run weekly from 20 December 2013 until 12 April 2014.

The stations offer easy access to a variety of top ski destinations in the French Alps, such as Les Arcs, Courchevel, Tignes, Val D’Isère, Meribel and many more, allowing people to choose a resort that matches their needs. For added convenience, Eurostar allows ski passengers to carry on-board an extra item of luggage in addition to the normal luggage allowance – such as a pair of skis or a snowboard – at no extra cost.

Tickets for the Swiss and French ski services are available from www.eurostar.com, by calling 08432 186 186, at Eurostar stations or from travel agents. 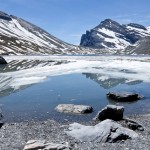 Hiking the Swiss Alps in Kandersteg 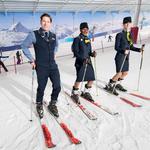 Eurostar expanding routes to the Alps