Blinking at the startling decor we stumble (literally) upon a large’ dressed to the nines’ wedding party unintentionally barring our way to the lifts. A middle aged woman wearing a sparkly couture frock, tethering on matching high heels herds a couple of mini fairy princesses (flower girls)encased in clouds of tulle.

Then an elderly country man, a tweed cap planked down on his head, passed by wearing a look of quiet desperation amid such hedonistic glamour.  I caught him later hidden behind the horse racing pages of a newspaper, a tad more relaxed, in the calmer environs of one of the bars decorated in rich blues, greens and black. 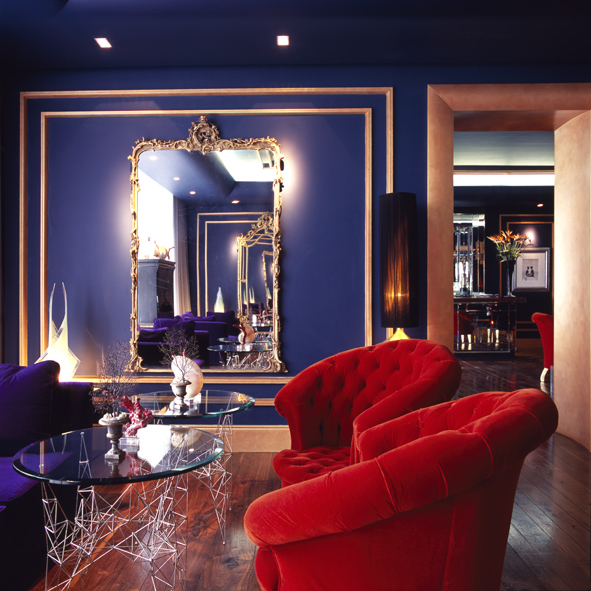 The G (short for Galway!) dates back to the height of Ireland’s ‘Celtic Tiger’ era, a bright star in a firmament of celeb owned establishments like the trendy U2 owned Clarence Hotel in Dublin.

Designed by famous  royal milliner Philip Treacy who hails from  a small  far flung Co Galway village where he honed his skills as a child dressing his sister’s dolls, the first thing to be said about the G Hotel is that it is genuinely ‘different’, as effervescent and fun filled  as a glass of bubbly.

With neither spacious grounds nor winding avenues and perched on the edge of the last set of major traffic lights approaching Galway city, more associated with DIY stores and carpet retailers, it’s setting  is the first surprise. 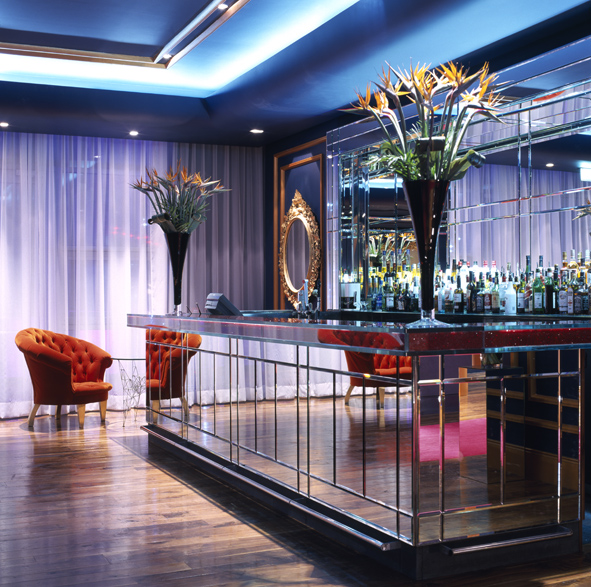 At the rear of the complex that houses the G we discover a branch of Woodies, a cinema, a pet shop  and  a couple of coffee outlets. The G Hotel embraces and takes advantage of its unusual location offering a keenly priced Dinner and a Movie package targeting business that might otherwise might be shy about dining in 5 star surroundings as well as the anniversary/special occasion market.

Opened   back in 2005 The G survived Ireland’s downturn, continuing to appeal to the moneyed   brigade as well the less well heeled with something nice to celebrate. It might be a festive fashion themed   afternoon tea or a ladies day out featuring hours of indulgence in the award winning ESPA and dinner. The interior  features regularly in glossy magazine fashion shoots. In contrast to some other 5 star establishments I found the G to be nicely informal and chilled. 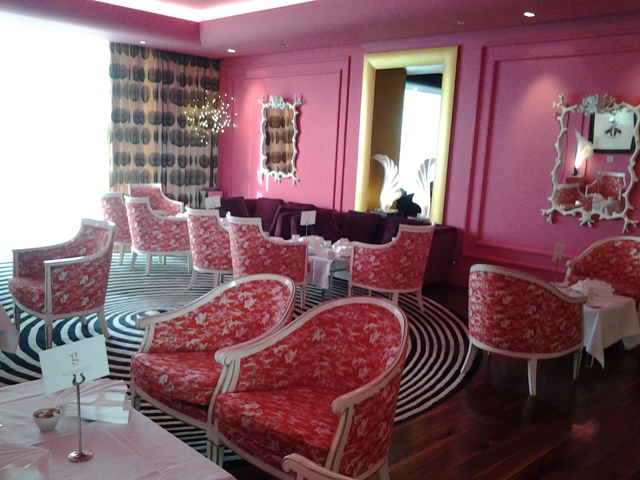 The route to our room – a dark corridor peppered with decadent reds and purples – was designed to inspire quiet!. Bedrooms inspired by Philip Treacy’s vision of landscapes and seashores   of Co Galway are designed with shell shapes and patterns of sand and ripples. Wherever you look, from the sweep of a door knob to the wall etchings his hats come into the picture too. The bedside lamps are modelled on Philip Treacy’s first hat designs.  Cupcakes iced in cream and pink with the G motto await new arrivals to the spacious soft and seductive bedrooms.

The flow of traffic that passes is silenced by efficient sound proofing and rows of bamboos and other exotic plants that screen you off from the outside world, except for upper suites looking out on the water.

I spent an hour enjoying the vitality pool with its numerous aquatic massages and the tropical mist and arctic rain showers. The relaxation area looks out on a thicket of bamboo reminiscent of south East Asia. I fancied a cup of herbal tea but there was an added charge and only water came free.

The G has a special suite dedicated to supermodel Linda Evangelista, friend and muse of Philip Treacy and water colours of her wearing his signature hats and head pieces adorn many of the bedroom walls. 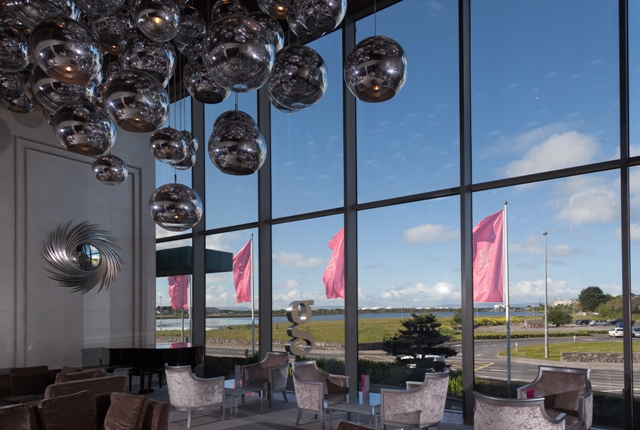 The sea – albeit a inlet  of Galway Bay  Lough Atalia is nearby so the whole hotel design reflects that, from the Connemara Co Galway bred rare seahorses that swim in a tank embedded in the wall of the reception area to the oyster grey wallpaper  and 250 Origami birds suspended from the ceiling of the spa’s vitality pool.

The G’s award winning restaurant Gigis offers 2 courses for £22,50 and 3 courses for £27. The kitchen is headed up by Cedric Bottarlini who is half French and part Italian and Spanish. Due to other commitments we did not dine there on this occasion but hope to do so again soon.  Breakfast at Gigi’s featured traditional Irish breakfast (delicious, he said) and I opted for G style eggs Benedict, probably the best I have ever eaten from an extensive cooked to order choice. 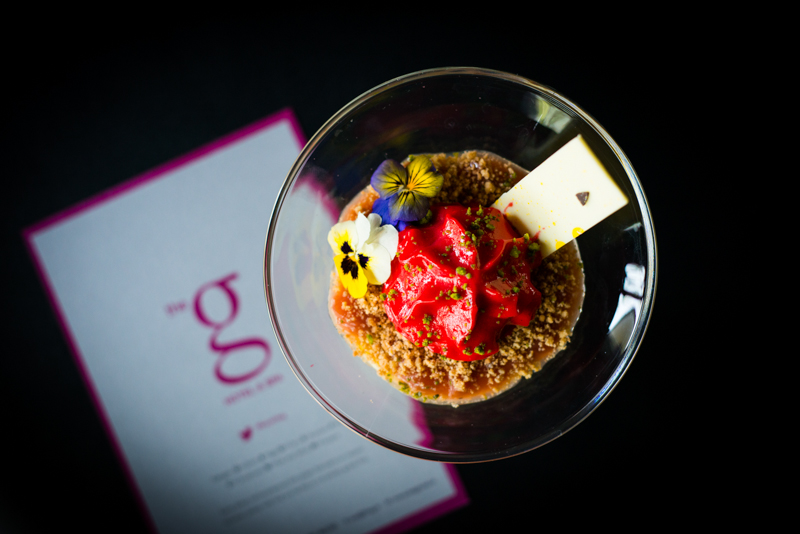 The scenic university city of Galway city is a brisk 20 minute walk from here or take a shuttle, taxi or local bus. One  US reviewer raving about the G’s comfort  warned “you might find it hard to leave your cocoon and discover Galway and the surrounding countryside”. But it’s well worth making the effort, especially to enjoy the bracing air along the promenade at Salthill the nearest seaside with stunning views at sunset over Galway Bay, enjoy some traditional music on Cross street at Tigh Neachtain’s or wander the famous Spanish Arch and other medieval  landmarks. Galway is famous for its festivals throughout the year. The best includes Galway Arts Festival and the Galway Races in July and the international Oyster festival in September.

Tell me more about the G Hotel Galway

To find out more about Galway see www.ireland.com  For special packages at the G Hotel   Online hotel  bookers  offer rates from  €140 for a double including full a la carte and buffet breakfast dependent  on  dates.   Galway is only just over 2 hours down the motorway from Dublin airport and less than an hour from Shannon Airport.  See Aer Lingus  and Ryan Air 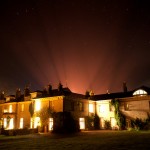 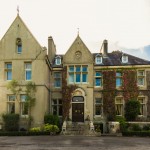