To celebrate the first birthday of the Queen’s Terminal, Heathrow Terminal 2 gets royally trollied today with the unveiling of a unique golden luggage trolley modelled on royal state coaches .

When the trolley handle is pressed God Save The Queen plays from speakers, filling Terminal 2 with Britain’s national anthem. Handcrafted by British designers the trolley uses Her Majesty’s collection of carriages, phanteons, broughams and barouches for design inspiration, including both the famous Gold State Coach and newer Diamond Jubilee Coach. The designers have transformed a regular Heathrow luggage trolley into the golden birthday showpiece.

Normand Boivin, Heathrow’s Chief Operating Officer said, “Heathrow is a proudly British airport. Exactly one year ago today, Terminal 2 officially opened its doors. We wanted to commemorate this proud occasion by providing our passengers with an eccentric and quintessentially British addition to the terminal.  We have a long association with Her Majesty that stretches right back to our beginnings when the Queen opened the first passenger terminal and we wanted to celebrate the birthday milestone with a symbol of this.”

Terminal 2 will celebrate its birthday with both staff and passengers alike. As well as the golden trolley this includes regal arts and crafts for kids, a string quartet and appearances from Beefeaters.

The golden luggage trolley can be found at Terminal 2 throughout June, taking in both the birthday of Terminal 2 and the Queen’s official birthday. 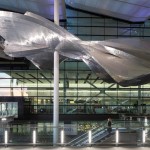 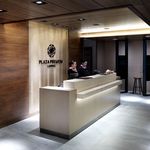 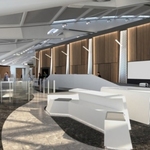