United will be the first airline to operate from Terminal 2 when it opens on June 4, 2014, bringing its 17 daily Heathrow flights – currently split between Terminals 1 and 4 – ‘under one roof.’ Later this year, the operations of United’s 22 Star Alliance partners serving Heathrow will progressively move to Terminal 2, the alliance’s new home at the airport.

‘We’re very excited about our move to Terminal 2 and these extensive and sophisticated lounges reflect the importance of Heathrow to United’s global route network,’ said Jake Cefolia, United’s vice president of Atlantic & Pacific sales. ‘We operate more flights to and from Heathrow than any other U.S. airline, and many of our most valued customers travel regularly on the 17 daily flights that link London with six of our U.S. hubs. These lounges will enable us to provide these customers with the best levels of service on the ground as well as in the air.’

Together, the two lounges occupy 22,000 square feet (2,043 square meters) of space and are located near the airline’s gates in Terminal 2’s satellite concourse. Both facilities feature floor-to-ceiling windows with views of the airfield, luxurious décor and vintage aviation-themed artwork. Both will offer complimentary food, beverages (including alcoholic beverages) and Wi-Fi. Seating areas and furnishings are conducive to either relaxing or getting work done, with abundant power outlets. 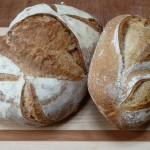 The Artisan Bread School comes to Barsham Barns in Norfolk