Ascona’s annual jazz festival is in full swing as I roll into town at the end of another memorable day driving clockwise around the Grand Tour of Switzerland. Hotel Eden Roc is waiting to greet me, my haven of luxury on the shore of Lake Maggiore, a slice of Italian Riviera in Switzerland’s Italian speaking region.

After a day of majestic snow capped mountain passes and dramatic river valleys the tall palm trees swaying in Eden Roc’s lakeside gardens are a soothing reminder of just how much of the Mediterranean is reflected in this corner of Switzerland.

Hotel Eden Roc is effectively a trio of linked buildings just a few metres from Ascona’s promenade, the muted sounds of jazz wafting across the lake as we check in 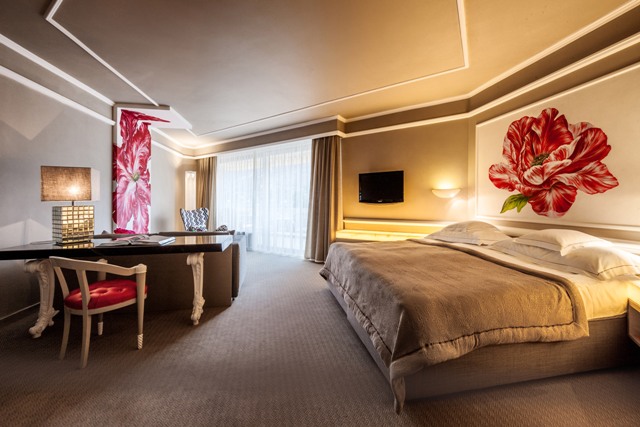 “Would you like free guest tickets to the festival Mr. Mossack?”

Now that seems an extremely civilized thing to do after a good dinner, so naturally I accept, after all, it’s not every day you get to see and hear some world class musicians playing live.

I grab a lounger in the extensive gardens to make the most of the afternoon summer sunshine, those swaying palms being put to good use as the perfect antidote to insomnia.

With a new compact beach area and two pools there is no shortage of space for wallowing alongside Eden Roc’s private lakeside. 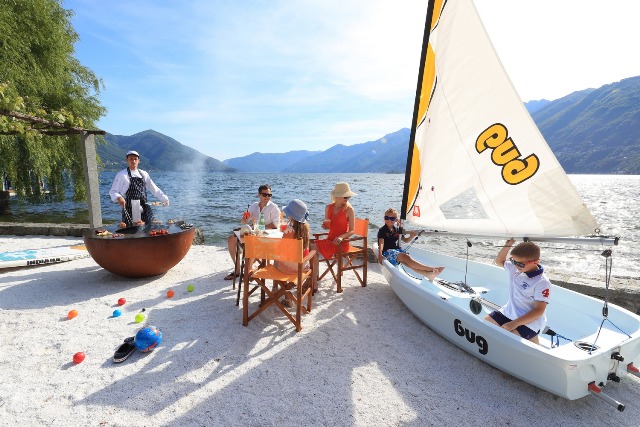 It’s a wonder what a good shower can do to revive you after a long drive, and frankly the shower in my suite is epic enough to warrant the term rain-forest.

This recently renovated suite is the work of celebrated Italian designer Carlo Rampazzi, whose artistic creativity is evident throughout the hotel. 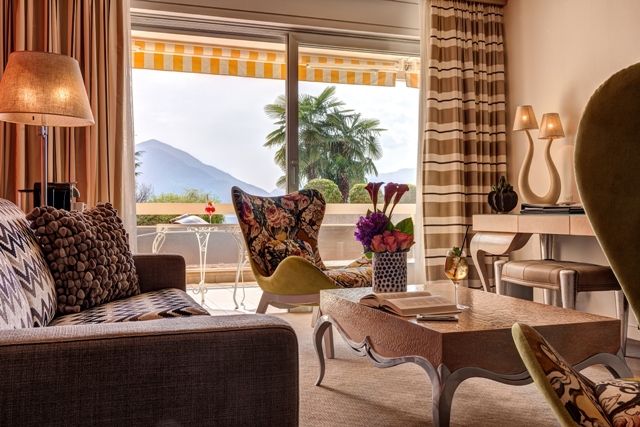 The colourful bold palette and interior furnishings with more than a nod to 60s retro, help raise the charm level considerably. The queen size bed is fall in and fall asleep, the linens feeling crisp and satisfyingly expensive.

Downstairs, the Hotel Eden Roc’s restaurants are gearing up for another busy night; the Eden Roc, the hotel’s main dining room is where Chef Cyrille Kamerzin “reinterprets” classic Mediterranean dishes and collects 15 GaultMillau points along the way.

La Casetta is down by the lake.

This small yet intimate villa is taken for a private function during my visit, but on other nights it specialises in pasta and seafood.

The villa may be small but it comes with a very big history.

It was named Casa Signore in Croce back in March 1945 when it hosted a highly secret meeting between German senior officers and Allied commanders to discuss Germany’s surrender of its forces in Italy.

Ultimately, this meeting was to shorten the War in Europe by some eight weeks. 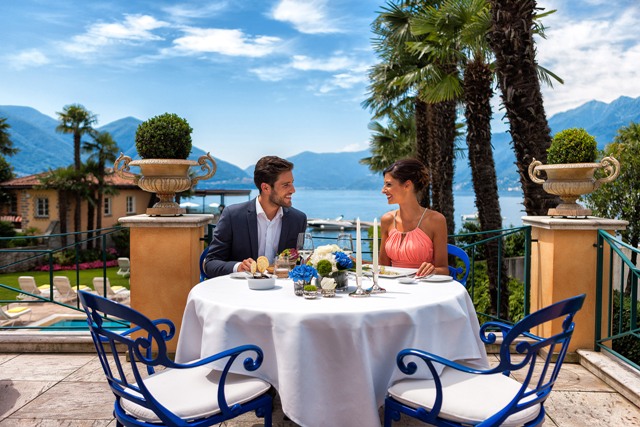 My restaurant for dinner however is the 17 GaultMillau Point La Brezza. A lot less historic you might say, but still highly memorable nonetheless.

The domain of head chef  Salvatore Frequente provides excellent southern Mediterranean dishes from a substantial menu of the day which I fall in love with despite the offer of a tempting a la carte menu. 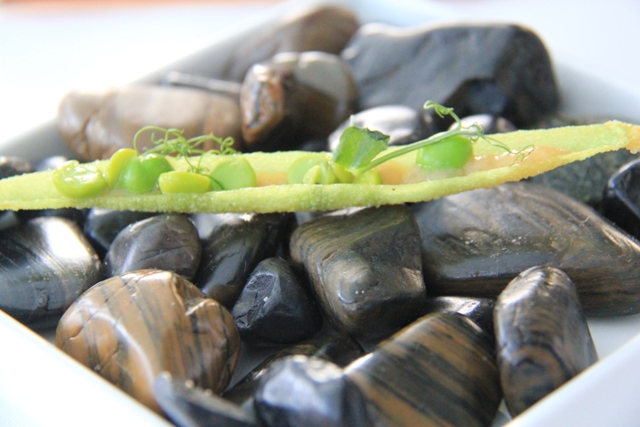 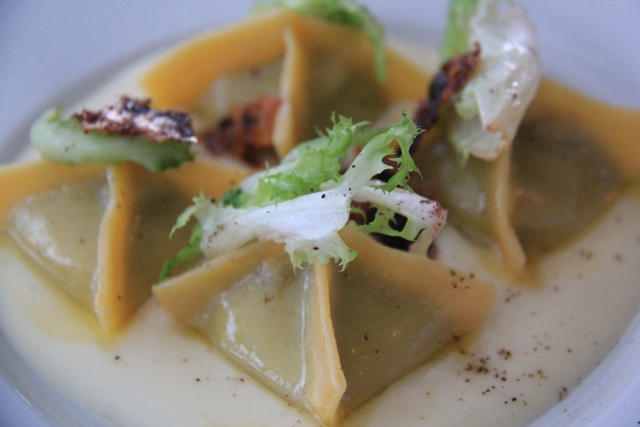 This is a magical location; the outdoor terrace of La Brezza, overlooking Lake Maggiore and eating delicious food. From a starter of red shrimp with mint and peaches, through to a succulent main of porc Iberico with black garlic and apricots. 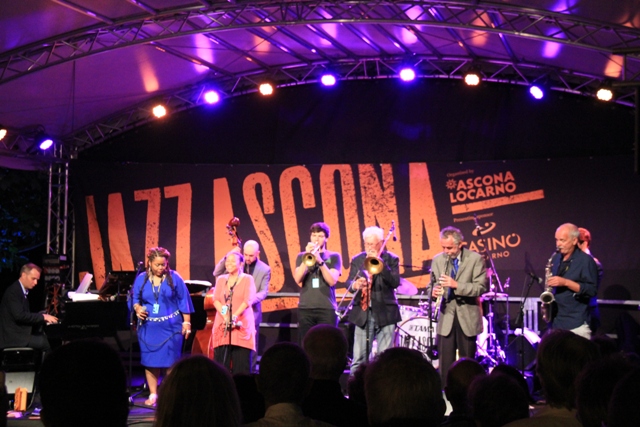 After a night of live jazz all along Ascona’s lively promenade, I take one last moonlit stroll down by Eden Roc’s small marina before turning in.  The lights from Italy’s Pino  twinkle in the distance across the lake.

It has been a great day.

Hotel Eden Roc certainly fulfills everything you would expect from a Swiss Grand Hotel and for me, the added touches of Riviera flair, swaying palms and private access to Lake Maggiore makes it all the more special.

I am missing it already.

Tell me more about Hotel Eden Roc in Ascona

Double room including breakfast: from 390.00 CHF per night for two

For more information, detailed map and a bespoke guide book on the Grand Tour of Switzerland go to Swiss Tourism

The all-inclusive fares start from £71 one-way*, including all airport taxes, one piece hold luggage and hand luggage, meals and drinks 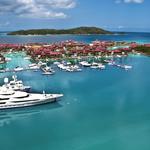 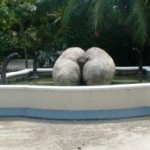 The Seychelles True Garden of Eden?