In India’s palm-rich south, where Karnataka and Kerala meet, kambala rather than cricket, is the most popular sport.Two pairs of buffaloes are raced head-to-head along specially prepared twin tracks in kambala, the sport of the people in the rural districts around Mangalore. This is Kambala Buffalo Racing in South India.Crowds of up to 20,000 people gather on race days. People cheer while men sprint with their buffaloes along the jodukere kambalas, deliberately waterlogged, 450 feet (137 metres) long tracks prepared in river beds or the sodden mud of paddy fields.

The sport has a long history. The earliest kambala races are thought to have been held by neighbouring farmers for recreation. The events fulfilled a practical agricultural purpose; the buffaloes’ beating hooves helped soften ground between the harvesting of the first crops and the sewing of the second season.

The region’s Alupa kings, who reigned between the twelfth and seventeenth centuries, are credited with patronising kambala and encouraging its evolution into a regulated sport. Kambala, then, is the sport of kings in this area. 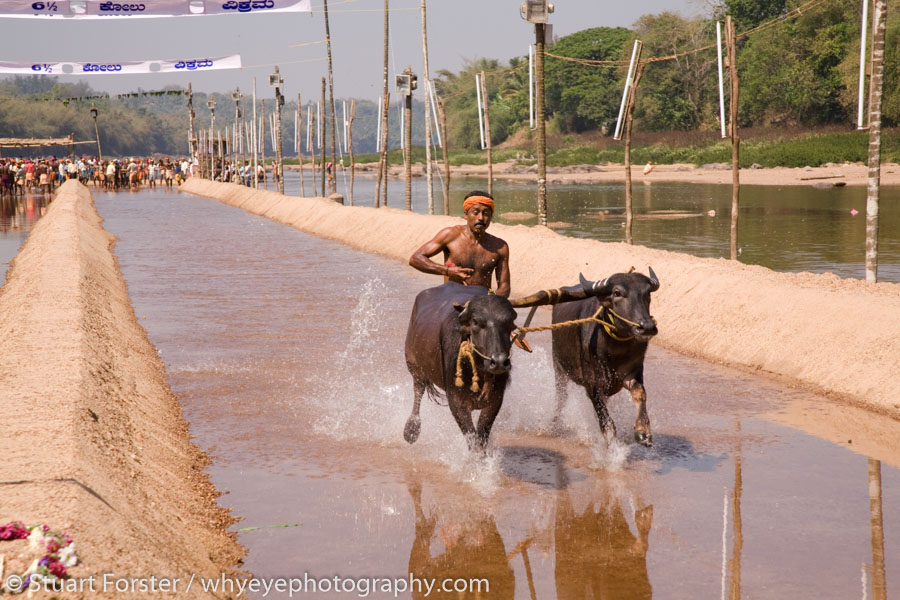 Even today—in the Tulu speaking regions of Dakshina Kannada, in Karnataka, and Kasaragod, in Kerala—kambala champions are treated as celebrities.

The top racers are accomplished athletes. Known as yeru gidapanaye, meaning “buffalo riders”, their lean, muscular bodies are wrapped only in lungis, a form of loin cloth, as they sprint along the track on race days. Riders also wrap their heads with material bearing their team colours.

Teams are sponsored by wealthy landlords, men who can afford to spend money on a full-time trainer and a nutrient- and protein- rich diet for their racing buffaloes. 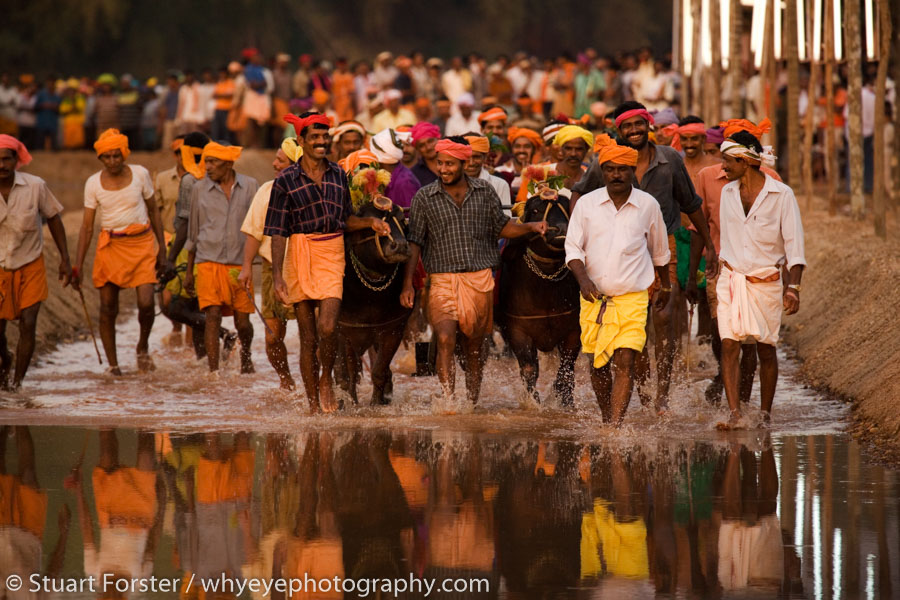 “Many years ago farmers would race, but nowadays we have people who train buffaloes only for kambala. The buffaloes were used for farming and in the off season; they would be raced. These days they are trained only to run,” says Ronald Fernandes, a Mangalore-based journalist.

The buffaloes selected for kambala racing are given warm baths and regular massages, using groundnut oil, to help keep their muscles supple and help maximise their performance. The animals are rubbed down and washed in the nearest river or stream before and after each race. Then a fresh application of oil is worked into their shining, slate-grey hides.

Despite the apparent good treatment of the kambala buffaloes, animal rights groups express concern over their welfare. Riders whip the buffaloes as they race; some more vehemently than others. Some critics believe that the whipping is excessive, arguing that the sport, or at least the whipping, should be outlawed. 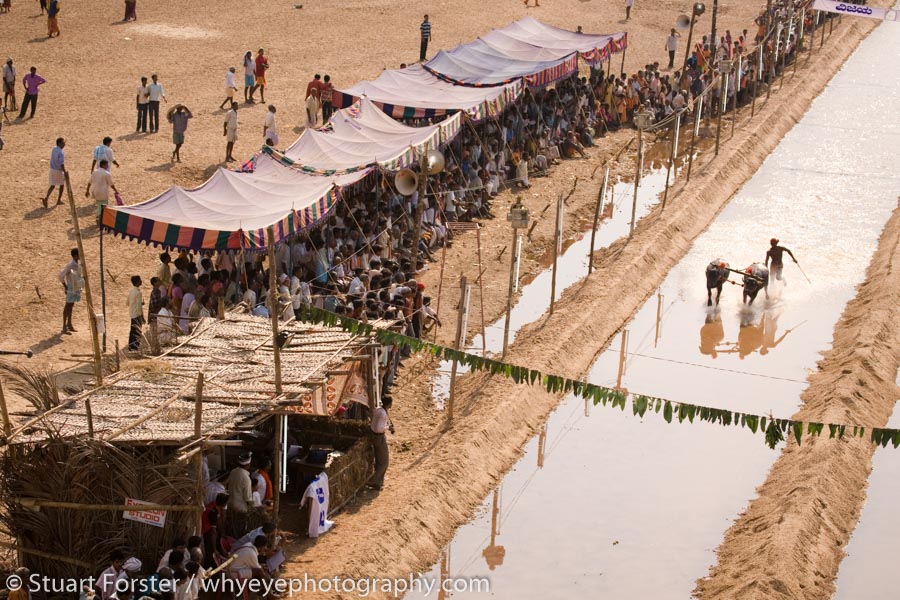 But in an area where farming is the mainstay of people’s lives, the average kambala fan does not complain about the treatment of the animals; many think that buffaloes that never have to work in fields have it good.

About 45 kambala meetings take place during the course of a season, from November until April. Roads into the villages choke with traffic on race days. Muscular bulls and their handlers are transported on the backs of trucks. Farmers and rural labourers cram into open-backed vehicles or arrive at venues in tractor-drawn trailers. As they get out of their vehicles, the spectators and members of the racing teams exchange jokes and banter; kambala is a very much a community sport. 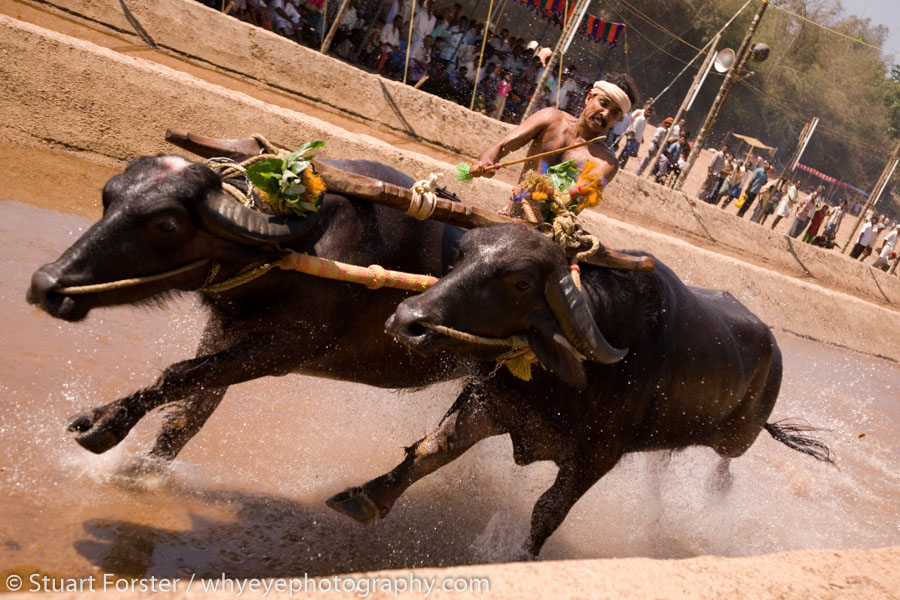 The kambala provides a framework for other traditional sports. An oiled coconut is used as the “ball” in thappangayi, a team game which has been compared to rugby. Played in muddy fields, the aim of thappangayi is to place the ball in the rival team’s goal area. Tug-of-war is also popular. And while kambala attracts the attentions of gamblers, the serious money is wagered on cock fights held nearby on race days.

The kambala teams take their presence seriously, preparing their animals and ensuring that the yokes and headdresses are well presented. Appearances are important in kambala. Speed is paramount but judges also award prizes for presentation and points for style while running. The judging can be a lengthy process, because as many as 150 pairs are entered at some meetings, meaning racing goes on through the night and, occasionally, into a second day. 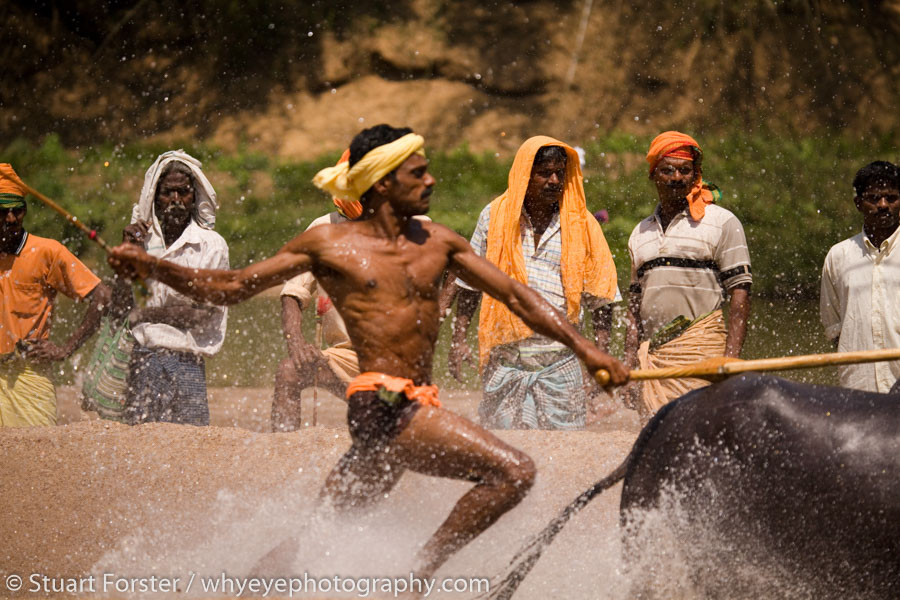 Members of the judging committee inspect the animals’ teeth, to gauge maturity and classify the pairs according to size. The winners of top categories will take home prize money of about 20,000 rupees (£200 or US$330) and a gold medal.

“But more than the prize is the prestige,” says Fernandes. “The owners are rich men, so rupees 20,000 is not much money to them. More important is the honour of winning.”

Nevertheless, the prize money has increased considerably over recent years. In bygone times, prizes would often be awards of fruit, rice or betel nuts rather than money. But in 1969 the sport started to undergo a revolution when two brothers, Gunapal and Dharamaraj Jain, prepared a twin track and invited farmers to race on it. Prize money has continued to increase but the track sides are still free from advertising hoardings. 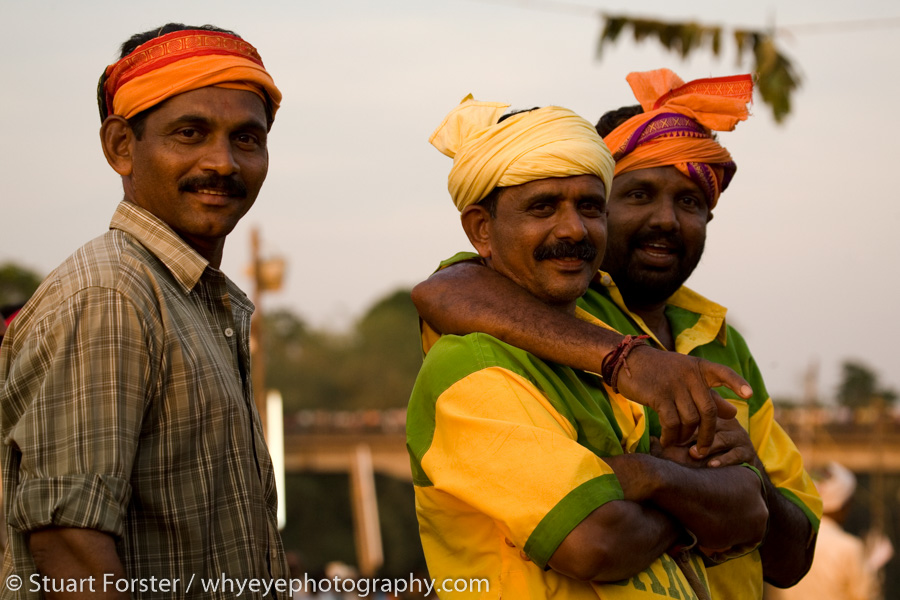 The first runs of the day warm ups, allowing the judges to categorise the animals. Then the racing begins in earnest. There are three styles of kambala; one in which the “rider” runs with the buffaloes holding a rope, another in which the rider holds one of the buffaloes’ tails and a third where the rider stands on a wooden plank harnessed between the animals.

This third style is kana halage. The wooden board upon which the rider stands ploughs through the liquid on the track, throwing up a spectacular spray. Banners, known as toranas, hang 21 feet (6.5 metres) and 24 feet (7.5 metres) above the track. Splashing them brings bonus points and spectators roar with approval when riders succeed. 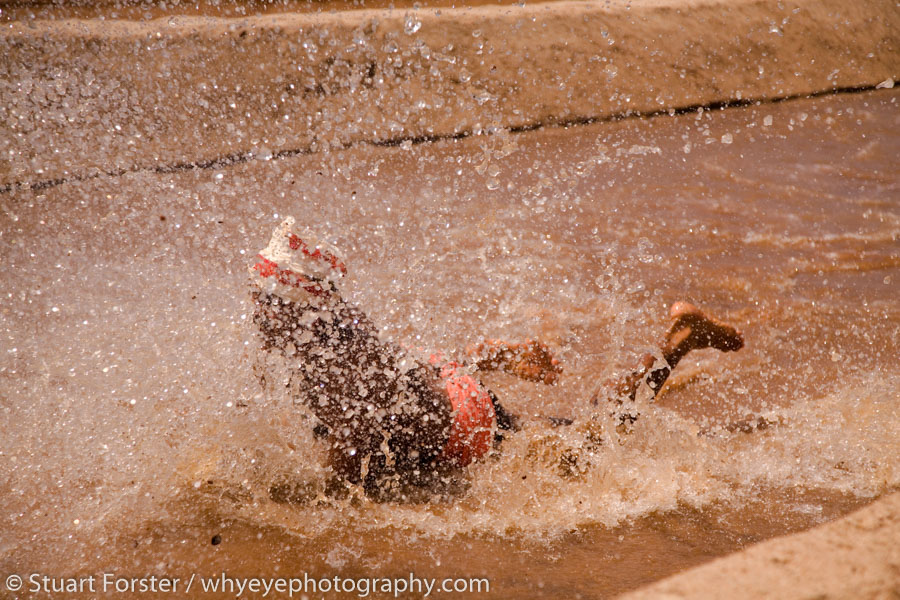 “What football is for Europeans, kambala is for the people of this place,” says Fernandes, explaining the shouts of appreciation. Cheers accompany the racing long into the night.

Tell me more about kambala buffalo racing in South India

Stuart flew to India from London Heathrow to Mumbai with Jet Airways then onward to Bangalore (a total of 11 hours 15 minutes). Return flights in Economy Premier seating cost £1,578.75. Hire a car with a driver to travel between Bangalore and Mangalore.

The Gateway Hotel Mangalore (Old Port Road, Mangalore; tel. +91 824 6660420) is a chic 4-star hotel close to the Arabian Sea. The hotel has a spa and its Cardamom restaurant serves dishes typical of Mangalorian cuisine.

Bekal Fort, overlooking the Arabian Sea, is the largest fortress in Kerala and 65km from Mangalore. Within Mangalore, take a look at the ornate wall painting in St Aloysius Chapel. For beautiful sunsets take a stroll on the Panambur or Tannirbhavi beaches. If you want to view a Hindu place of worship head to the Kudroli Gokarnath Temple.

The best time to visit is in the mild, usually dry period from November until March. That coincides with the majority of the kambala season. 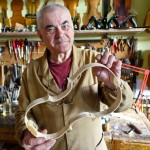 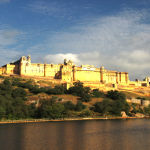