It’s as close as you’ll get to sleeping in the same bed as Johnny Depp and Kate Moss.   Like other A-listers, including members of The Rolling Stones, they are former habitues of the Portobello Hotel.
Not that you’d ever guess, from the looks of this utterly genteel hostelry a stone’s throw from Portobello market.   It’s every bit the gracious Victorian house, the very antithesis of a rock’n’roll hangout.   Only a small brass plaque distinguishes it from its white stucco neighbours in this quiet enclave off Ladbroke Grove an eight-minute stroll from Notting Hill Gate.
Some rooms are smaller than others, but all are furnished with antiques and have a certain quirky charm.   Mine, one of two refurbished attic rooms, had a claw-foot bathtub, much like the one in which Depp and Moss are reputed to have bathed in Champagne, separated from the sleeping area by a theatrical curtain.  However, refurbishment has yielded the addition of the larger bathroom American visitors would expect, with a reclaimed Victorian rainfall shower and graphic tiles paying homage to the period, as does the puce-pink bedroom colour scheme
In place of take-away toiletries there are generous bottles of high-quality shampoo, conditioner and shower gel from Green & Spring, trademark supplier to  A Curious Group of Hotels, who acquired the Portobello from its previous owners. 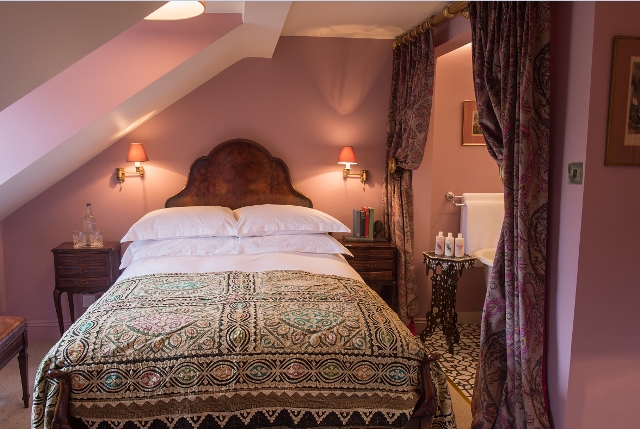 Breakfast has always been served in the gracious downstairs drawing-room overlooking gardens, where there is seating on squashy sofas as well as upright chairs, but now it is presented buffet-style.  Comestibles include top-notch prosciutto from Lidgate butchers down the road, fresh figs and not very special cheese, but superior yogurt and preserves.
Butter is charmingly served in antique china pots rather than vulgar portion packs.
While the tariff reflects the high cost of London hotels, a couple of lower-priced single rooms on the third floor offer a stylish, reasonably-priced berth for antique-hunters and fashionistas wanting to shop Portobello Road and Westbourne Grove.  Like all the rooms, these include free wi-fi and water and that indispensible 21st century amenity, a Nespresso machine.
One interesting package includes a two-hour private walking tour of  Notting HIll, a truly fascinating London neighbourhood which can veer from gracious to gritty and back again within the space of a single block.   This posh part, though, feels perfectly safe late at night and is within a minute’s walk of a bus stop.

More about the Portobello Hotel 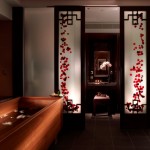