Michael Edwards samples one of Europe’s legendary rail journeys from Italy to Switzerland.

The Bernina Express, a spectacular 75 miles of Alpine scenery from Tirano in Italy to Chur in Switzerland, is one of the World’s Great Railway Journeys. As your train ascends steadily through pine forests, hanging valleys and glacial lakes onwards to St. Moritz you expect to see Michael Portillo – and his amazing technicolour trousers – broadcasting superlatives to an envious audience. Given World Heritage status by UNESCO the Bernina Express is a must, not just for train fans, but for travel aficionados.

But there is a problem. Where do you start? Officially the Bernina Express begins in Switzerland’s chic Lugano, with a red coach. No, not a train. A coach that cruises along the palm-fringed aquamarine ribbon that is Lake Lugano before picking up the coastal road alongside Lake Como, glamorous home to millionaires and movie stars. Then it passes through the orchards and vineyards of the Valtelinna Valley. 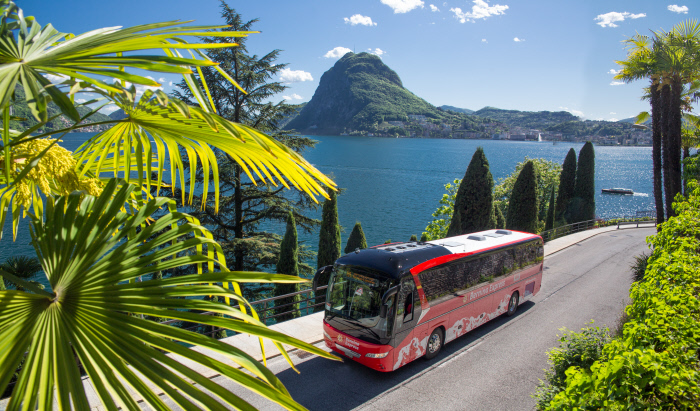 Finally, the coach arrives in the medieval Italian small city of Tirano, ideally giving you time for a leisurely Italian lunch before catching the “real” Bernina Express. But don’t expect breakneck speed. The rolling stock isn’t an Express in the conventional sense of the word, it has to climb to over 2,500 metres to traverse the Bernina Pass. As the marketing slogan goes this is a journey from limoncello ice-cream to ice, from palms to glacier.

At Brusio the late 19th Century engineers faced a challenge. As 7% was the maximum gradient possible the railway just could not gain sufficient altitude to pull into the next station – and perhaps more importantly a train charging down a steep incline would require phenomenal braking power. A spiral viaduct, curving 360 degrees, supported by nine stone arches, was the innovative and architecturally beautiful answer.

The Bernina Express was born out of love. Willem Jan Holsboer’s wife was hospitalised in a Sanatorium high in the Alps. The Dutchman, frequently travelling to visit her, was tired of being shaken to bits by the horse and cart journey. In 1888 he proposed a railway line from Landquart to Davos but the Bernina Express linking Tirano to St Moritz was not finally completed until 1910.

The big question is whether to sit back in one of the open panoramic coaches that run in summer and enjoy one spectacular ride or to savour this epic journey in small bites. Even if you are not a train-spotter it is worth alighting and taking a short mountain hike to the Circular Viaduct and taking some astounding photos of snaking trains. 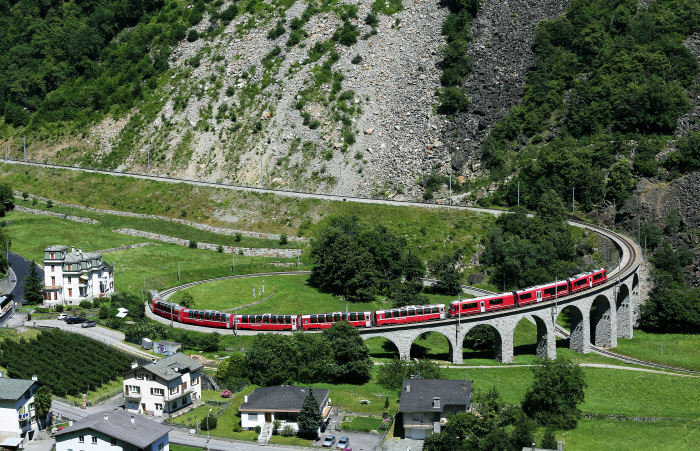 Poschiavo presents some difficult choices too. You could stay a night at the historic pastel pink Albrici Hotel, a former coaching inn, with its timbered rooms in the heart of the small town of Poschiavo. This town with a turbulent history of Catholic – Protestant rivalry has an attractive town square, museum and Via di Palaz – a time-capsule of 19th century houses and lupin filled gardens.

Alternatively, the Bernina Express stops right outside Le Presse Hotel. With a terrace and restaurant overlooking Lake Poschiavo, this spacious family run hotel is a luxurious base for exploring the area. The valley is a finger of Switzerland surrounded by Italian mountains. Step away from the railway and onto the SS Sassablo, a boat that cruises the tranquil lake, whose purchase was the result of a remarkable community project. 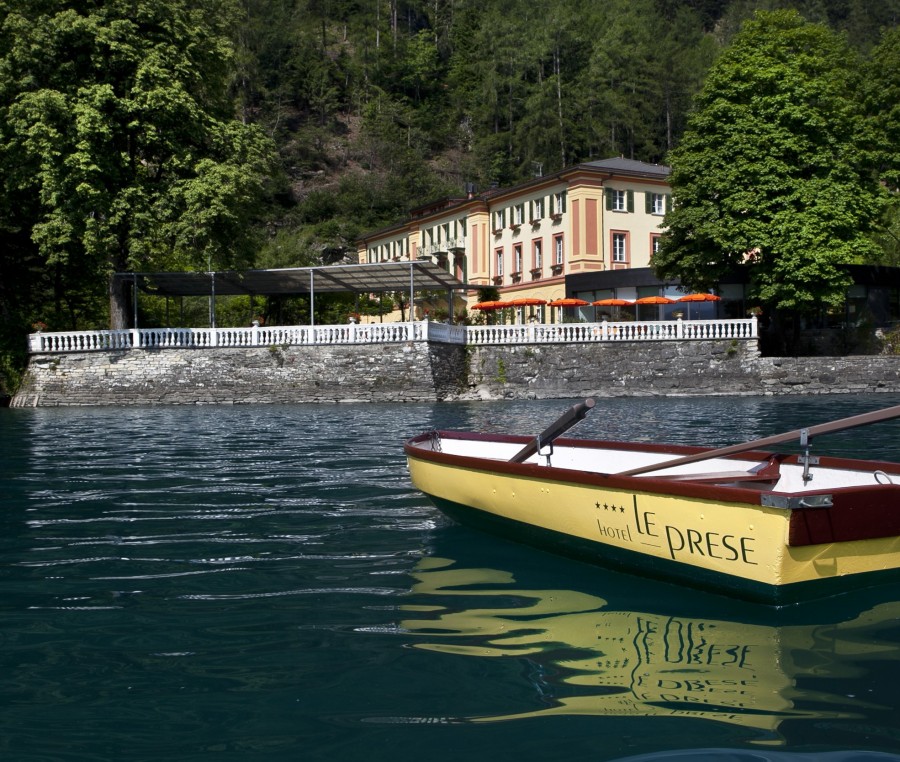 Back on the Bernina Express another essential stop is Alp Grüm overlooking the glistening glacier. At an altitude of 2,091 metres this station is only accessible by foot, rail or helicopter. Currently timbers are being airlifted in for essential railway repairs.

The station merges seamlessly onto a restaurant and hotel: rooms are named after surrounding peaks. Watch the sunset and then stay the night to view a glorious sun rise next morning. Splendidly isolated, Alp Grüm is a rare stronghold of Switzerland’s fourth language – the endangered Romansch. Appropriately Holsboer changed the name of his company to Romansch, naming it the Rhaetian Railway. 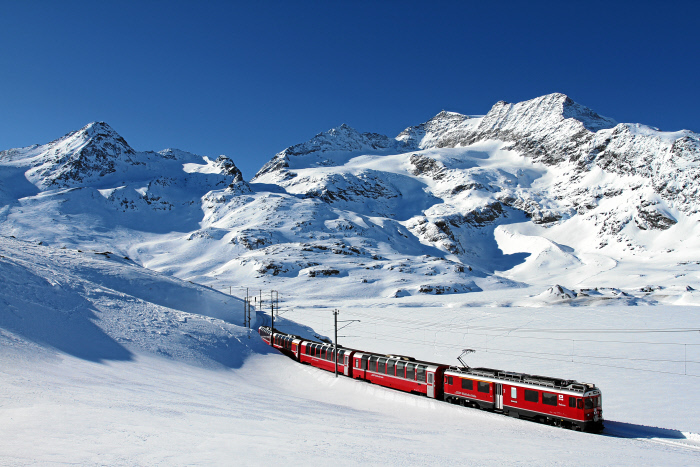 There’s no such thing as the “wrong type of snow” for the Bernina Express. Almost invincible snow ploughs keep the trains running even in the snowiest of winters. Twice a year an original – and now rather fragile – steam snowplough is taken out of mothballs and given a nostalgic run.

Rhaetian Railways have a strong sense of history and heritage. Passengers have the opportunity to hire a 1920s Pullman coach – all polished teak and stylish Art Deco upholstery – for a special occasion. And then there’s the piano bar: maybe Humphrey Bogart and Lauren Bacall never took the Bernina Express but if they did they would have been utterly at home, sat at the cocktail bar with a Martini or two, whilst Sam tinkled at the ivories. 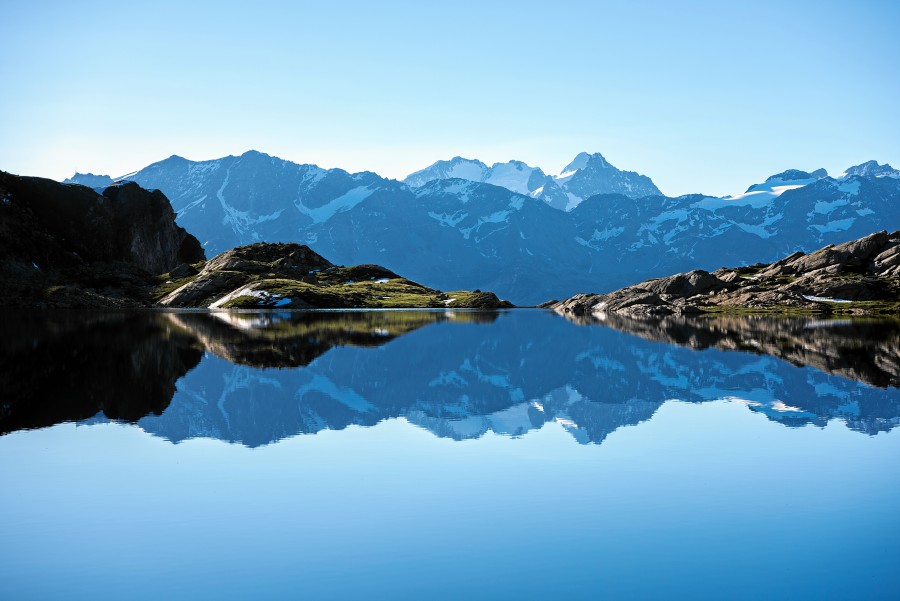 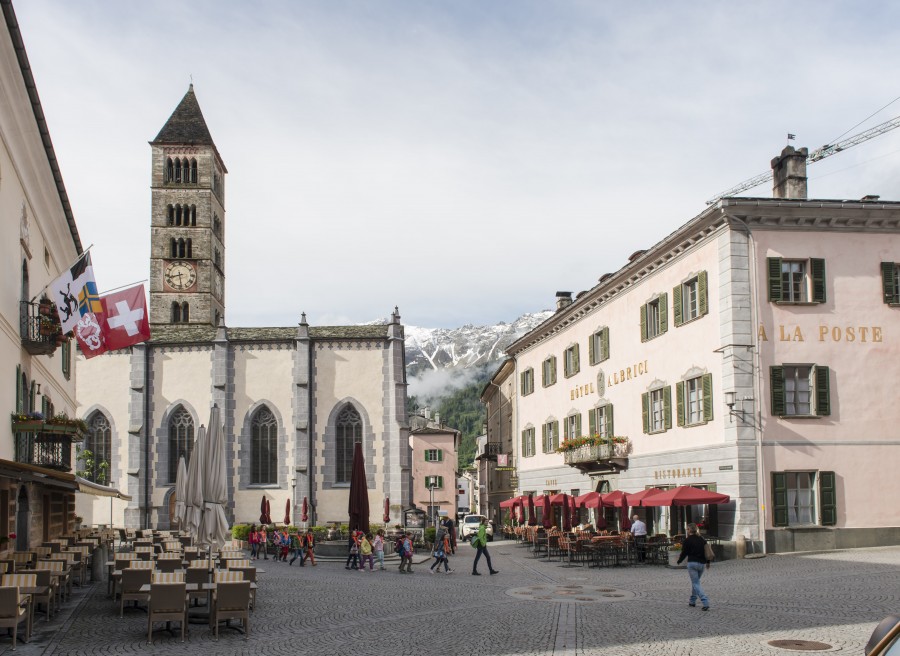 The final question is when is it best to take this spectacular railway – a civil engineering masterpiece of 55 tunnels and 196 bridges – that links Northern and Southern Europe. Christmas Card winter scenes? Spring’s melting snows and green promise? The full sunlit emerald glory of Summer? Or Autumn’s browns and oranges? The Bernina Express presents many difficult decisions.

Tell me more about the Bernina Express

Fly into Zürich and then take the train for around 2.5 hours south to Lugano or start your journey from Chur. Alternatively, you can fly to Milan and then travel north to Tirano.

Visit the Rhaetian Railways website  https://www.rhb.ch/en/home for information on timetables and prices.

In 2018 the Bernina Express Bus from Lugano to Tirano and vice versa operated from 15/2/18 to 25/11/18. It runs daily in peak season and from Thursday to Sunday in the low season. 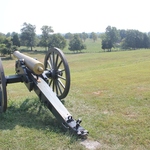 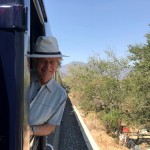