Recently opened in the former Holborn Town Hall building, which has seen many restaurants come and go, Colonel Saab is the new kid on the block. It’s the first UK opening from Roop Partap Choudhary from the five-star Noor Mahal hotel, north of Delhi, in India. He says it’s an homage to his mother and father who travelled all over the subcontinent when they served in the Indian army. And some of the recipes are his mum’s. 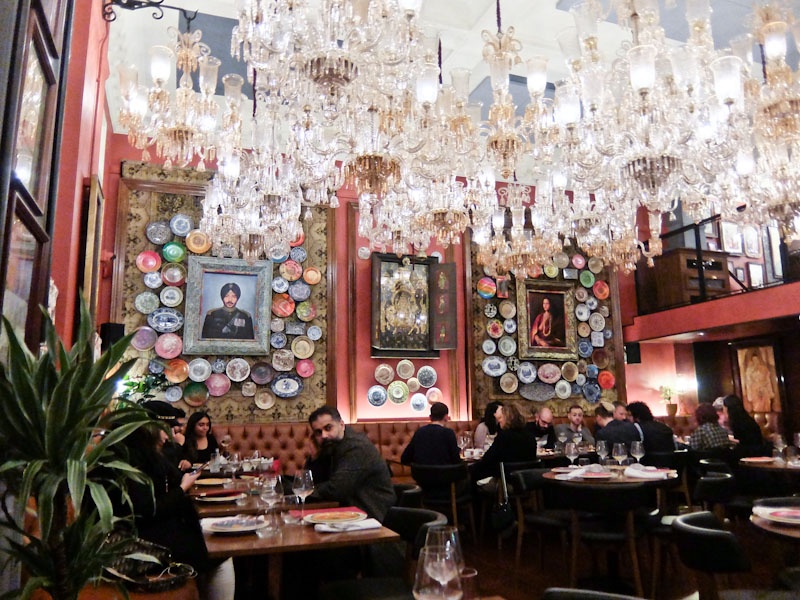 Inside you get the idea – chandeliers are packed into the high ceiling with artworks, ceramics and his parent’s portraits, crammed onto the walls. Yet it’s a large comfortable space, the acoustics are good and the service is attentive. It’s on two levels, with a bar and private dining areas. When we visit most of the customers are Asian so they must be doing something right.

They say that the dishes are those you don’t normally find in UK Indian restaurants but, still, there’s a certain familiarity about them. At least, they’re not just pouring over hot sauces over boiled meats – far more care is taken in the cooking. Don’t expect curry house prices, either, this is the West End and it’s not cheap. 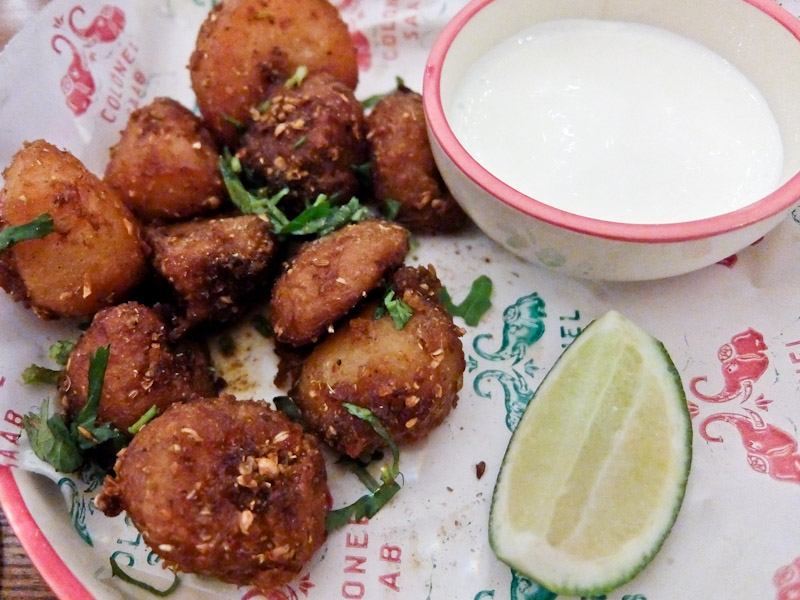 We start with an assortment of poppadoms, with a few dosas thrown in, to dip into the three chutneys. These are not out of a jar but taste fresh and mildly spicy. We’re recommended to try the Jaipur Baby Aloo which is the Indian equivalent of triple cooked chips. First, the potatoes are boiled with herbs and spices, then fried at low temperature, then finished on a higher heat. They’re spice encrusted crispy on the outside, soft inside, and a cucumber and mint raita alleviates their heat.

Next Noor Mahal Chicken Tikka arrives, something that is very familiar but here tender, succulent and fragrant. It’s very good indeed and, paired with the freshly blended coriander and green chilli dip is a standout dish. A basket of assorted naans appears on the table and we soak them in the dip, almost a meal in itself. 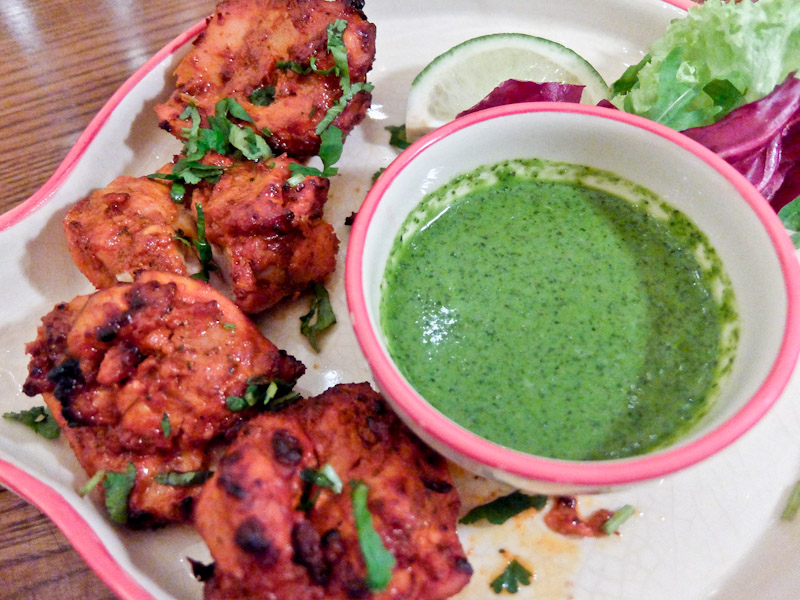 Of course, there are other highlights. I like Doodh Maach, cod poached in lightly spiced milk, a Bengali preparation which is completely new to me. Cashew and cardamoms don’t overwhelm the fish, and there’s basmati rice on the side. As a special treat, we also get to try their Sunday Mutton Curry, slow-cooked pieces of lamb neck until it’s meltingly tender, not too hot but strong in tamarind. 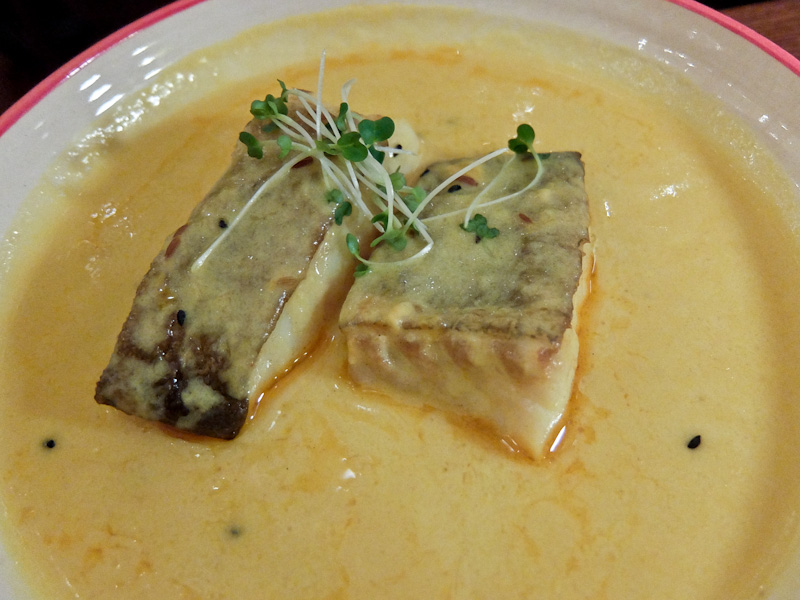 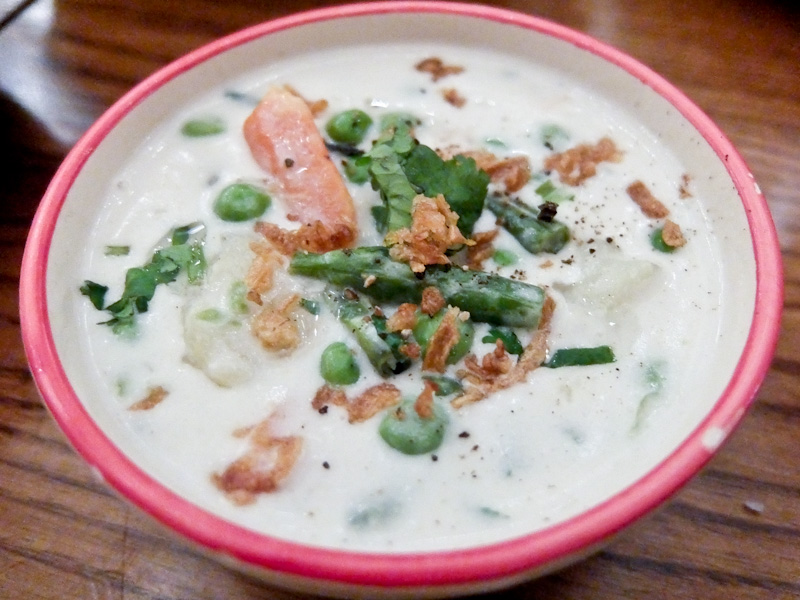 We’re also persuaded to try the Daal Makhani, creamy black lentils in butter, and the Fort Kochi “Ishtu”, vegetables cooked in a Keralan coconut stew. By this stage the lentils defeat us, but the veg is a pleasant way to end the main course. It would be a shame not to finish without tasting the desserts and the Rasmalai Milk Cake with cardamom cream is suitable authentic.  I can’t say the same for the Pineapple Tarte Tatin with Tellicherry pepper but it certainly hits the spot. 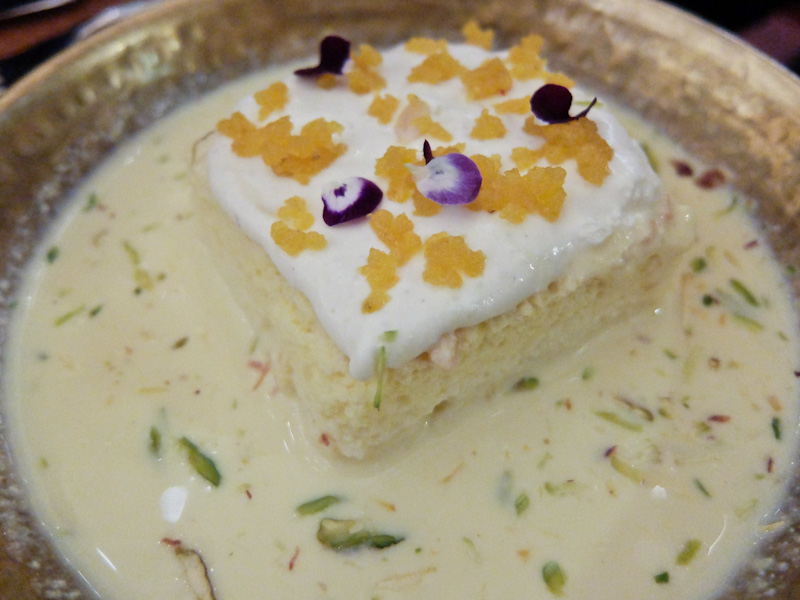 The food here is certainly a modern twist on the flavours and textures of India. It presents regional greatest hits so you’re travelling all over the subcontinent and the cooking is confident and assured. The menu is not huge, a good sign, and all dishes seem to have been well thought through. Best of all, even though we eat a lot, we don’t leave with that Indian restaurant bloat. Rather we’re looking forward to returning and trying their other dishes – I just hope that Colonel Saab is here to stay. 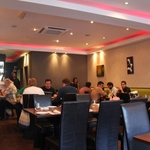 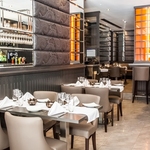 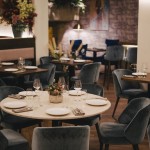