On the second leg of her Namibian journey, Solange Hando travels through Damaraland and the spectacular wildlife sanctuaries to the north.

Leaving the misty Atlantic coast, we emerged under a bright blue sky in the wide barren land at the foot of the Brandberg range rising to over 8500 feet, the highest point in Namibia. Goats, a few sheep, a lonely elephant track, there was little vegetation except great clumps of euphorbia, toxic to humans. In Uis, we shuddered at the graves of 26 villagers poisoned by the fumes on a celebration barbecue. The Damara are one of the oldest ethnic groups in Namibia and in the open-air Living Museum near Twyfelfontein, we enjoyed traditional dancing, played board games with pebbles and attempted to communicate in the exhilarating ‘click language’. Then we followed the ‘turbulent road’ to see the ancient rock engravings on a cliffside and the petrified forest near Khorixas where some of the trunks are said to be 280 million years old. 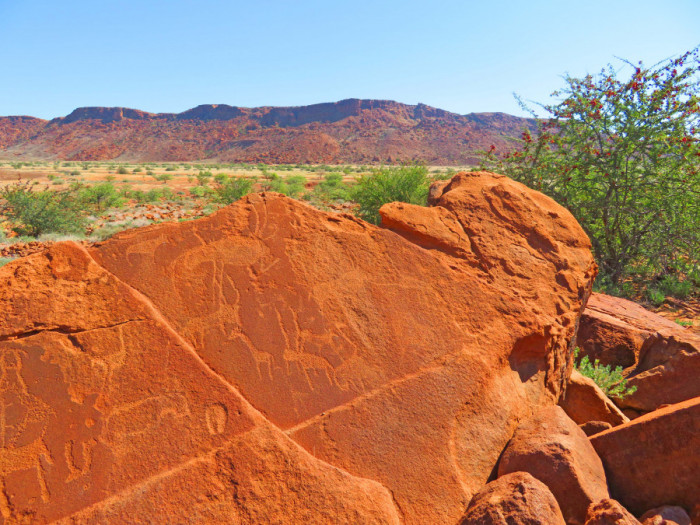 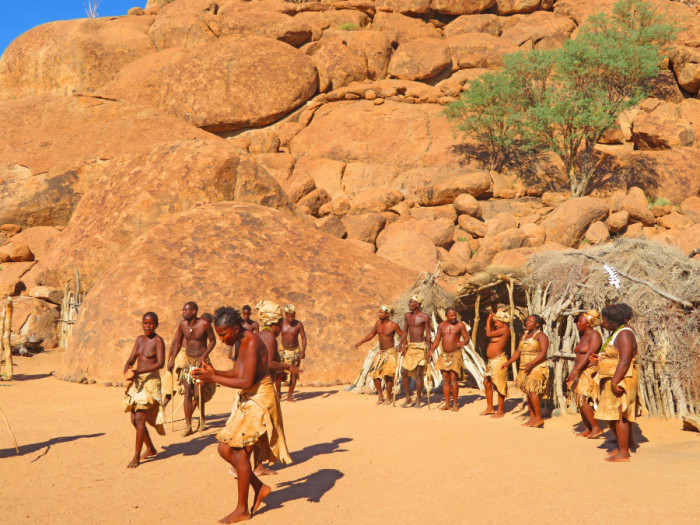 The next day brought a roller coaster ride to Palmwag, a windy place where my tented room had a horn by the bed in case I needed help.  Leopard and elephant tracks meandered all around but we set off into the hills across dry river beds with dizzying canyon views. Mountain zebras and springbok watched us from a distance though most exciting were the desert lions with long legs and big paws perfectly suited to the rugged land. Dawn was magic in Palmwag, the bleached bushman’s grass shimmering like snow while the early mist drifted in pinkish shades.

It was a long drive to Etosha, the top National Park claiming 350 species of birds, over 100 different reptiles and 113 mammals, including the endangered black rhino and black-faced impala. Named after the ‘Great White Place’, a salt pan so vast you see it from the moon, it is the best known of the parks, reserves and forests which cover 42% of Namibia. ‘And of course’, said my guide, ‘our wildlife has priority right across the country, we were the first nation in the world to include conservation in the Constitution.’ 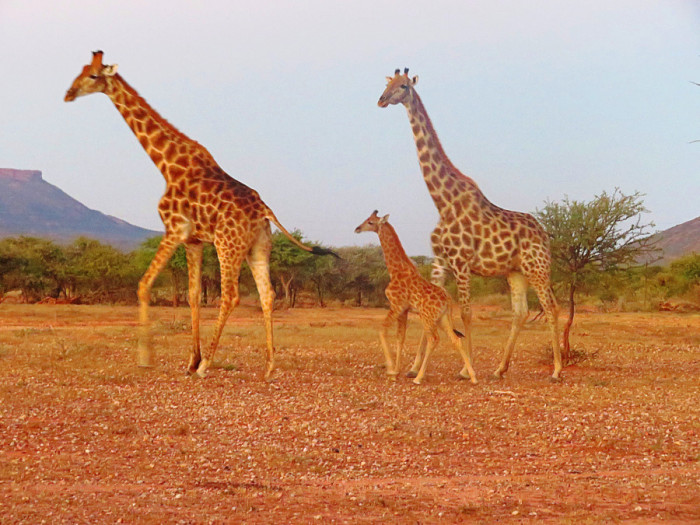 Wow, that was impressive and just beyond the Galton Gate (on the west side), we reached our first waterhole where giraffes, wildebeest, elephants, zebras, oryx and more quenched their thirst. ‘That’s always the best place to see the wildlife,’ explained Joel, ‘especially in the dry season when water is scarce. It isn’t so lush but you get better views.’ So we stopped many times on our way to Okaukuejo, a popular rest camp near the southern entrance with rustic bush chalets and a flood-lit waterhole out of this world. 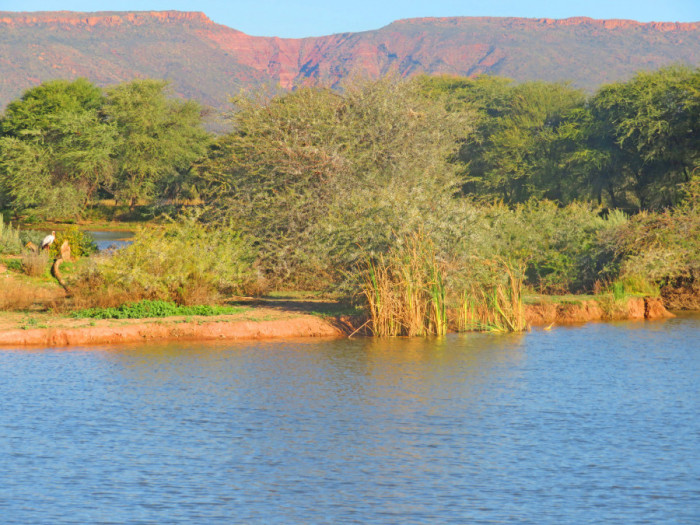 There, after an idyllic sunset, I joined the guests sitting on the steps, no flash, no whispers, complete silence in a dim eerie light full of expectations. Zebras were among the first, dozens of them elbowing each other, lapping endlessly as giraffes waited for their turn, approaching ever so cautiously while keeping guard for each other. Later the elephants arrived, 18 of them spreading in a single line along the bank, young ones between adults for safety, then when they gathered family-like before heading away, black rhinos, babe and all, slowly moved out of the shadows. No rush, no noise, every species in rank order, it felt like a dream in slow motion.

Next day? Climb in an open truck, before sunrise, barely 40°F, blanket provided but a woolly hat, gloves and fleece are highly recommended. Bouncing on the stones in blistering wind, this was a challenging start to the long journey towards the east gate. I wouldn’t have missed it for anything in the world, gazing at dik-dik, the smallest antelopes, a Greater Kudu with its magnificent horns, the jackals, hyena, impala, cheetah and cubs, three lionesses and myriad birds, my favourites the rosy-faced lovebird and the lilac-breasted roller. 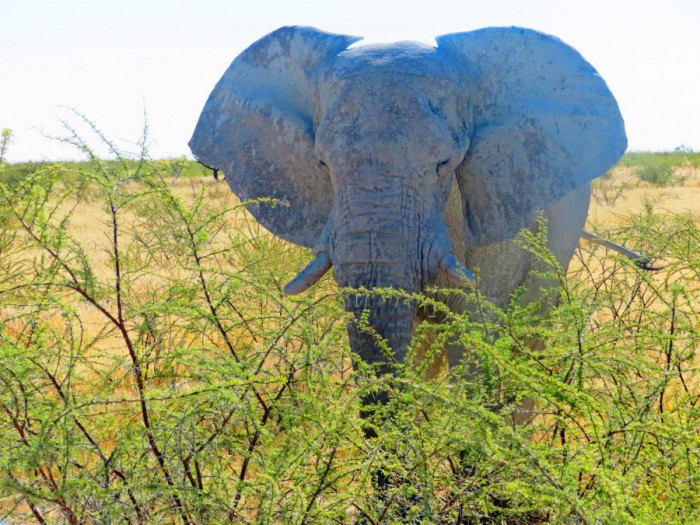 We lunched in Halali then continued across near-deserted land until…’Look out, white elephant!’ and there it was, ears right out, ready to charge, body covered in salt against the sun. We were on the edge of the pan, 80 miles long and up to 30 across, glimmering white and green and one of the largest in Africa. It provides saltlicks for the wildlife and waterholes in the wet season when it can turn into a lake, attracting up to a million flamingos. That was amazing but before our final night in Etosha, in the luxurious Mokuti Lodge, or ‘Bush of the Forest’, we encountered a leopard, almost within arm’s reach. He followed us for quite a while along the track then boldly stepped out in front of the truck to do his business in the most dignified manner. ‘Marking his territory,’ said Joel, ‘this is his land, he has the right of way.’

South of Etosha, on the way back to the capital, we stopped in the Okonjima Nature Reserve where the Africat foundation looks after endangered creatures, especially leopards and cheetahs. In this wonderful place run by experts and volunteers, animals roam freely in extensive grounds until they can be released into the wild. We hopped on a truck, stop, wait and there it was, a beautiful cheetah gently plodding on the red earth, tail slightly curled. Then it stretched out on the grass, soft fur, piercing eyes, ready for a nap in the shade.

A bumpy track led to nearby ‘Mount Etjo’, our last Safari Lodge, named after the impressive table mountain rising across the horizon 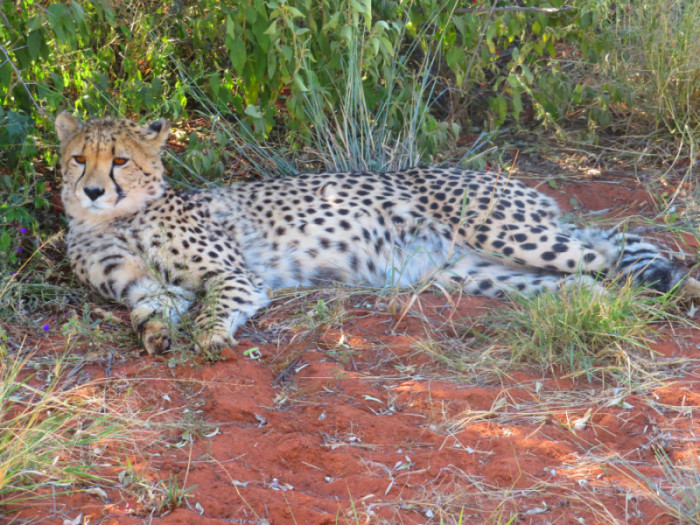 This was Okonjati, one of the oldest game reserves, close to the mountains and rather different from Etosha. Spiky shrubs, grasses and trees, there was a fair amount of cover yet we spotted ostriches, gambolling springbok, two giraffes and their young striding across the red earth, hippos snorting in the lake and white rhinos, square-lipped, so peaceful, it seemed, but don’t get close. I didn’t want to leave this enticing land but the wildlife cheered me up all the way to the airport.

Tell Me More About Namibia

www.lufthansa.com runs regular flights from London to Windhoek (1 or 2 stops)

www.vjv.com Namibian options include the Grand Tour, south and north

http://www.namibiatourism.com.na/ for more information on Namibia 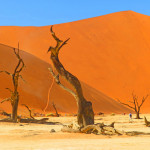 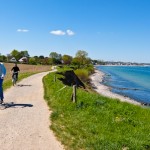