Camel meat, traditionally eaten by Arabia’s desert dwellers, is undergoing something of a resurgence in Abu Dhabi. A camel meat burger has now found its way onto a menu at Emirates Palace – one of the world’s most opulent hotels – and a camel meat pizza is now the popular choice at the Olivia’s restaurant at Abu Dhabi National Exhibition Centre.

However is has now become a celebrated dish by American three-star Michelin Chef Christopher Kostow who is making his Arabian debut at Gourmet Abu Dhabi, a 16-day culinary festival held annually in the capital of the United Arab Emirates and which runs until 19 February.

Chef Kostow left the city lights behind him for a journey to the isolated Arabian Nights Village deep in the Al Khatem desert. Surrounded by towering dunes, Chef Kostow was a guest of Chef Saeed Fawaz, who has been honoured by the Emirates Culinary Guild for his authentic representation of Arabian cuisine and who has cooked for many a ruling family’s wedding. On the special menu in the quaint surrounds of the village’s Al Maqtam restaurant, was roasted camel – a treat traditionally reserved by Arabs and Emiratis for special celebrations, particularly weddings.

The camel was first scrubbed with salt and vinegar before marinating for 24 hours in an aromatic paste of local spices, including garlic, ginger, green chilli, turmeric powder, cardamom, coriander, white pepper, and fresh tomatoes, tomato paste and corn oil. It was next steamed in a stock of bay leaves, cinnamon powder, coriander, cloves, cardamom, onion, celery, black pepper and corn oil in an oversize, 150cm wide and 75cm deep lidded pot, in which the camel was placed on a steam-tray 10 centimetres off the pot’s bottom, and covered with date palm leaves. After four hours of steaming over gas fire, hot charcoal was spread atop the metal lid to roast the meat for an hour.

The final dish ‘Hwar ma’a Machboos’ – was served up on a giant dish and was the centrepiece of an Arabian feast fit for the most honoured of guests. “The camel meat was absolutely delicious, like roasted lamb but less gamey with a soft texture and unctuous fat. We all really enjoyed it,” Chef Kostow said of his first taste of Emirati food.

Chef Kostow has incorporated local touches for his culinary promotion at the five-star The Ritz Carlton Abu Dhabi Grand Canal, which runs from 5 – 8 February, with the menu featuring camel bacon served with rye porridge, seaweed and Brassica mustard and local fish with Napa acorn, celery and black truffle.

“Locally, people say you should eat camel meat at least every 40 days for health and stamina – which camels need to survive the harsh desert climate. Camel is also high in protein and has less than half the fat of beef. It’s a good source of protein and vitamin E,” said Chef Saeed. 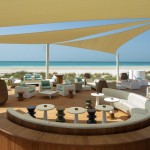 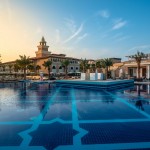